Some Specialties of the Region 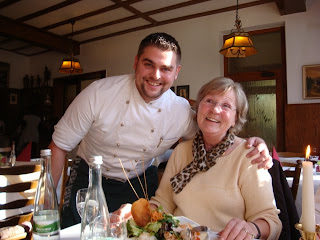 Yesterday, as usual on a Wednesday, I met with women friends for lunch. The picture is of one of them with the chef. (I did ask her if it was okay!) We got together at a well-known Gasthaus just outside Lahr. In the 1920s the Damenmuehle was the place to go for a Sunday walk, culminating in coffee and cake at the Gasthaus. It has recently been re-opened after having been closed for some time. The new owners have refurbished it inside and out without losing any of its warmth and atmosphere. Outside is a wonderful beer garden beside a small man-made lake where swans and ducks glide by, wonderful on a beautiful day and a great place to take small children or a special friend.

We women, of course, discussed numerous things, including blogs. None had ever read a blog or really knew that much about them. I didn't either before getting started on my own, though I did know what they were. They all gave me ideas about what I should write about. Food was high on their priority list! They mentioned Spaetzle, Spargel, Wildschwein, Zwiebel Kuchen, all of which are seasonal specialties here. Some of those I had in mind already and will talk about them as the seasons progress. Spaetzle is a Baden specialty all year long; Spargel is the white asparagus served here in Germany in spring; Wildschwein is wild boar and is served in late fall and winter, and Zwiebel Kuchen is an onion tart, served with new wine during the grape harvest.


Today, though, is about our lunch. The menu at the Damenmuehle is quite small, though they have added to it since last spring. In some ways the fewer options is a negative thing, but in others, it means the chef isn't so overworked that he can't put the time into his dishes properly.

My choice for lunch was Schweinelenchen, which is pork filet cut into several pieces for serving. I had three very thick ones, all topped with Camembert cheese, which were then broiled quickly in the oven. I have had Schweinelenchen many times but this is the first time with Camembert. Often it comes with Pfefferlingen (chanterelles). Both ways are a great idea for a dinner party, I think. Mine came with a delicious and delicate sauce and small potato croquettes made by the chef that seemed to melt in the mouth. They were superb. Lots of butter in the potato puree within them and that is what made them so flavourable. I ended up taking two of the three pork filiet pieces home (still topped with the Camembert) as I could not eat more.

Gertrud ordered Kuerbissuppe (pumpkin soup) to start. She said it, too, was excellent. At this time of year, from early into late fall, many Gasthauses have that on their menu. I always think of pumpkins as being North American, but I'm sure there are more pumpkin specialties served here in Germany than even there. We do see them everywhere and perhaps the idea did come from North America.

Erika had a chicken salad and it was so large she had trouble eating it all and, actually, I'm not sure she did. Monika ordered a Wurstsalat, which is another specialty of our area. It was huge! She also took half home. Wurstsalat combines thin strips of meat or Wurst (something like bologna but much better quality) with a salad dressing, along with some onion and cheese (the cheese only if it is called a Strasburger Wurstsalat) and perhaps a type of pickle or something else a particular Gasthaus might add. Wurstsalat differs from Gasthaus to Gasthaus and restaurant to restaurant. It's the dressing that makes the difference--and the quality of the meat.

The chef came to our table shortly after we arrived and asked us if we felt quite hungry. I then asked what was special for that day and he answered, "Everything!" He is personable and very talented and artistic, which shows in the presentation and his flair. He also came back to our table to ask if we enjoyed our meal. They were very busy with a large group from a conference in another room having lunch, so that was appreciated. The waitresses (Kellnerinen) wear Trachten (traditional German dress). Both, I'm sure, were trained in a hotel management or cooking school due to their professional service.

I must say that they had no idea I would be writing about them and neither do any of the other Gasthauses or restaurants or markets I have talked about.

We are fortunate here with so many good restaurants and Gasthauses within a short radius of where we live. Next time I'll tell you a little about our village, which is about 20 kilometers south of Lahr and an hour from Basel, Switzerland and Strasbourg, France.