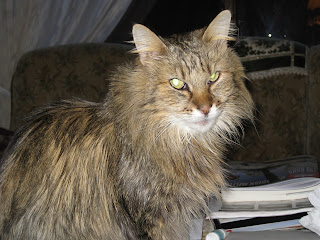 We have had many cats over the years and all are, and have been, special to us.  Tammy was our first and was my sweet little cat.  I talked about her in one of my earlier posts.  Fritzie was our second, and he loved Hans as if Hans had been his father!  He loved me, too, but I was always second in his heart.  When he died, we were both pretty heartbroken as he was certainly a special--and quite different--small feline.  My story today is about him.  The picture at right was taken a year ago.

He came into our lives because Hans couldn't resist him in a pet store in Annapolis Royal, Nova Scotia.  A farmer had taken a litter of kittens to them, all too young to have left their mother; Fritzie (my name for him) was one of them.  When Hans looked at them, he said that that little kitten, only about eight weeks old, came right to him and, full of personality and character, crept into Hans's heart there and then.  So home Fritzie came.  He remained a character throughout his life.  I resisted him initially but not for long.  I was concerned about now taking two cats across the Atlantic every year, but decided that we could manage that hurdle.  Little did I know that eventually we would be taking three with us every year!

Fritzie was a Maine Coon, but we didn't know that then.  Neither did the farmer or the pet store.  Here in Germany they cost about Euro 600 to Euro 800 ($900 to $1200); Hans paid $5--but not the reason he bought him.   Fritzie had no papers so perhaps wasn't a full breed, but he did have all the signs of that breed.  He grew larger and larger with a back that was very high and bony.  His tail was full and long, with his knickerbocker hind legs getting more noticeable until one couldn't deny them (they looked as if he had leggings on half way up).  He loved to curl up in small places and slept upside down often.  He also had the unique sound of a Maine Coon, almost like a beep; he didn't have the typical meow of other cats.

For that first flight back to Germany a few weeks later, Hans carried him in a soft-sided bag which opened at the top.  We had put a small body harness on him just in case he wanted to escape.  Even before leaving the house--after Hans set the bag on the ground while storing luggage in the car--Fritzie saw his opportunity and took off like a shot (or as fast as his then small legs would take him), the bag trailing behind him and with Hans in hot pursuit.  The writing was on the wall about that little cat's nature. 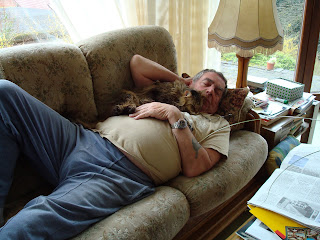 Halfway across the Atlantic that evening, a lady across the aisle tapped Hans on the shoulder and, pointing down, asked him if that was his cat.  There, sitting in the middle of the aisle, was Fritzie, enjoying the goings-on around him.  Luckily he still had his body harness on and was soon back by our feet.

He was full of himself as one of my sisters said.  Perhaps he knew what his breed was!  He did act as if he were a cut above other cats.  He wouldn't take no for an answer and when he wanted attention, he demanded it.  Whenever Hans sat or stretched out on the sofa, Fritzie wanted to wind himself around him.  He would station himself on his chest and wrap his legs and paws around Hans's neck.  He would look over to me now and again when I was sitting opposite and have a guilty look in his eyes, as if to say, "I'm sorry, but here is where I want to be!"  Always, within a couple of minutes, over he would trot to me, sit on my chest and hug me--but only for about two minutes, before heading back to his surrogate father, his guilt now dissipated.

At night, he wrapped himself around Hans's head!  And that's where he slept all night and was happiest.  Luckily, Hans didn't mind!  He swears Fritzie was a reincarnated human as he had so many human traits.  One year, when Hans was in Nova Scotia and I was in Germany with the cats, Fritzie made me his surrogate mother.  He then wanted to sleep around my neck but that didn't go over with me.  So much to his annoyance, I insisted he could sleep near me, but not on my pillow and head.  Every afternoon, after his daily sleep, he would demand attention and beep, beep at me (like a little alarm clock) until I picked him up for his hugging time.  Similar to when your children are young and after their afternoon sleep.  None of our other cats have ever done that, though they all want attention and love.  Fritzie, though, wanted it most.  And got it! 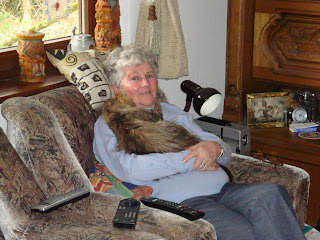 He could be a terror with the other cats and always wanted to be the master.  They understood that, but over the years he became less aggressive and they became less concerned.

Fritzie became ill very quickly, almost overnight it seemed, though we had noticed some changes for a while.  We had taken him to the vet who gave him an antibiotic and initially he seemed to be better.  But, within a week or so, he wasn't okay.  We did everything we could for him and so did our vet.  But ten days later we lost him.  He was nine years old.

We were both with him that early morning we took him in, after calling the vet at about 8 a.m., knowing we had no choice.  The vet had warned us that the outcome might come to this.  For several nights previously Hans had slept in the living room with him, as we didn't want Fritzie to be alone.  The vet told us he was likely infectious, so we wanted to protect our other cats.  (Now, however, we don't think he was, but it was better his being away from them regardless.)

Both of us and the vet had tears in our eyes that day.  He told me when Hans went outside to get Fritzie's cage from the car (he had carried him inside without it), that he had gone through the same thing with his beloved cat the year before.  We took Fritzie home with us and he now rests in the back garden beside our Tammy. 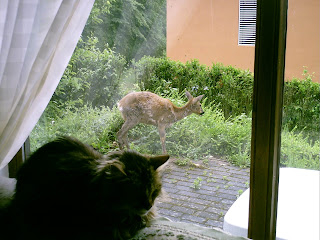 I know it's often hard for people who aren't cat or animal lovers to understand how anyone can love an animal so much.  Or to understand how much a pet can become part of the family or how they manage to wind themselves around your heart.  I think you need to go through such a time yourself to truly understand.  Daisy, Cleo, Annabelle and Lily are part of our household today and all have their own stories to tell.  So do Charlie and a few others, but those are for another time.

At left:  Two springs ago, a young deer came into our yard while Fritzie was sleeping on top of the sofa.

Posted by Janet MacDonald at 7:52 AM