Baden-Wuerttemberg is Alemannisch, so most people born in this province speak the Alemannisch dialect--as well, of course, as Deutsch/German.  Some children speak only Alemannisch until they go to school; there they learn, speak and study only Hochdeutsch.  If you are a visitor or have moved here from elsewhere in Germany, it is often impossible to understand what is being said as many use Alemannisch as their language of choice.
A brochure from the town of Muenchweier written in Alemannisch. 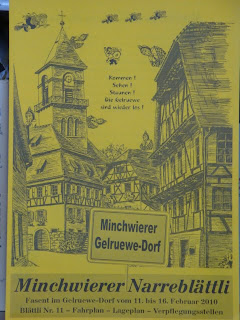 Narri, Narro is the traditional greeting during Fastnacht.  (Narren means fools.)  Narri is a female fool and Narro is a male fool.  These two words will be sung out at every parade or upon entering a Gasthaus during Fastnacht.

Schmutziger Dunschdig (Alemannisch) or Schmutziger Donnerstag (Deutsch) starts off the final week of Fastnacht with the "Hemdglunker-Umzug" (night shirt parade).  Dirty Thursday--as most Canadians here call it (schmutzig meaning dirty)--is the last Thursday before Lent, this year on February 11th.  On that night, kids and parents, the young and older dress in various forms of white shirts and gowns and parade through the streets, usually led by one or more bands.

Below, a small boy next to a fireman. 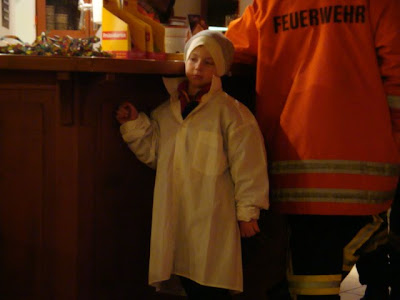 Below right, a mom and young daughter 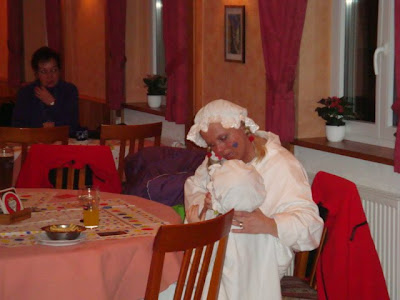 Tradition is that "Wieber" or Frauen (women) are free to do as they wish on Dirty Thursday!  Some do, no doubt, as the day and night belong to them.  Men wearing ties generally have them cut off by the Wieber. (Hans always wore his worst tie to work on that day.)  Everyone--men, women and children--eventually ends up in one of the local Gasthauses after the parade to continue the celebration into the early hours of the morning.  From then on until Fastnacht night itself (the Tuesday before Ash Wednesday), the celebrations get bigger and louder and more rambunctious.
Below, a view of the Gasthaus decorated for Fastnacht. 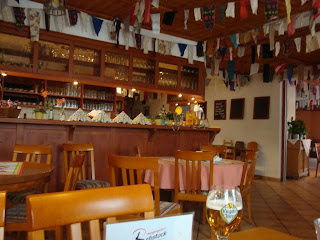 This year we joined the celebrations early at the Gasthaus Rebstock in Muenchweier.  We arrived there in late afternoon and had supper while awaiting the parade and the first of the revelers.  About an hour later a group that meets there each Thursday arrived for supper as well.  In good weather, many of them have a walk first.  All were in their late 80s.
Below, two pictures showing some of the crowd inside, including a group of older people and the Stammtisch at the back right corner. 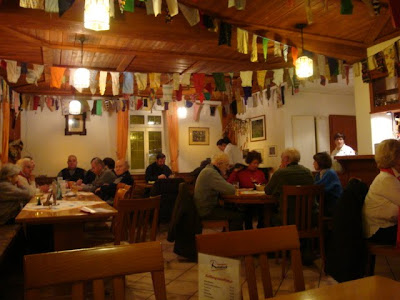 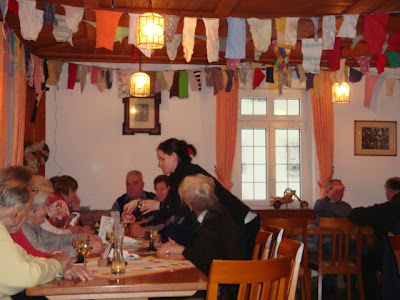 It was a snowy night and chilly, so we wondered if anyone would want to walk along the streets.  At sharp 7 p.m., we wondered no more.  A long line of white-clad celebrants walked down the middle of the street past the Gasthaus and on to the town hall.  They would eventually pour into the Gasthaus where the large party room was set up with tables and chairs and with music to come.
Below, a glimpse of the night shirt parade passing along the street and one of the participants outside the Gasthaus. 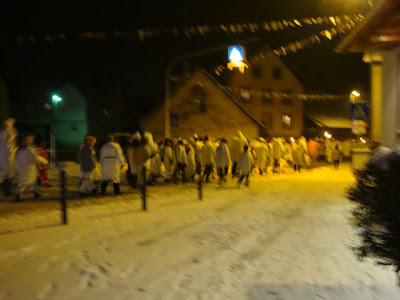 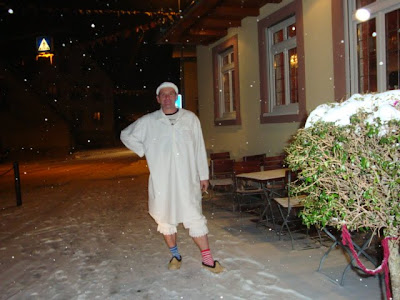 During these evenings, Gasthauses usually have a smaller menu than normal to make it easier to serve the numbers of people who eventually come inside. Hans ordered a Strasburger Wurstsalat and I, a Zigeuner Schnitzel.  The latter is pork Schnitzel (no bread crumbs on it) with a delicious sauce that includes sweet peppers, mushrooms and onions.  Wurstsalat is a specialty in Baden-Wuerttemberg and tastes differently everywhere you go even though it is basically the same.  It is the dressing that makes the difference.  It is made with meat (a type of cold cut) sliced into strips, with onions, spices, vinegar and oil. The Strasburger part of it is the cheese, also cut into strips and spread over the top of the salad.  Without the cheese, it is simply called Wurstsalat.  It is accompanied by a hearty bread.
Two views of Hans's Strasburger Wurstsalat 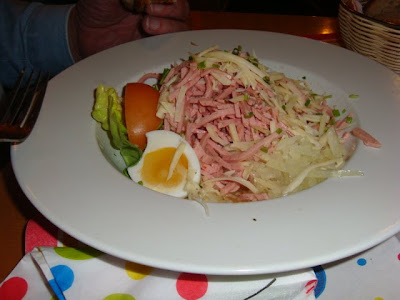 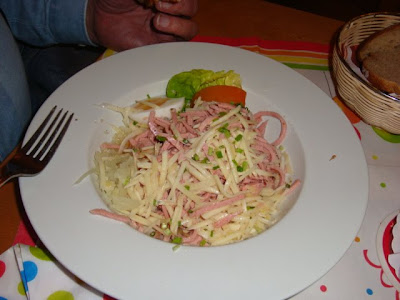 Some people take this final week off work and go out every night.  Businesses sometimes close for the entire week as so many of their workers aren't at their freshest the following morning!  Hans and I celebrated up a storm about 25 years ago or so.  We didn't take time off work except for one day, so we felt pretty worn out by the end of the week. One day my boss came into my office and asked if I'd been hit by a steam roller!  I felt like it!   That was after an all-night early-morning parade.  We got to bed at 5 a.m. and got up again at 7:15 a.m.  Needless to say we'd also had a few glasses of wine or beer during that night and morning.  Now we leave it to others to celebrate and wake up the next morning with a headache or worse!
Narri, Narro from the waitresses at the Rebstock Gasthaus. 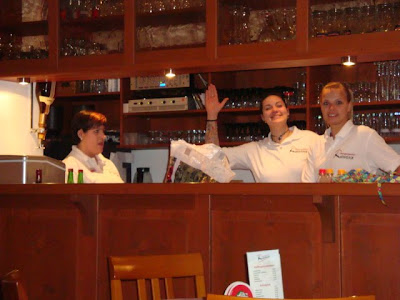 Awaiting the start of the evening's fun. 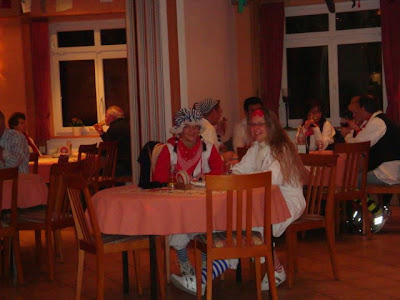 Dressed for the occasion. 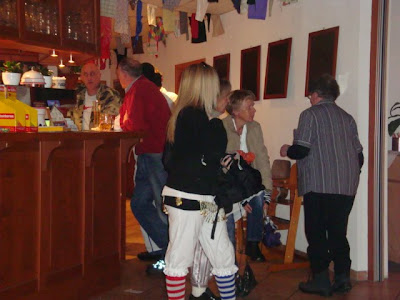 As I write, it is Rosenmontag, the biggest day of all during Fastnacht, with many parades everywhere.  Tomorrow is the last day when, in our area, some of the towns enact "the burning of the witch," with huge bonfires built in the centre of the town.  Supposedly that will get rid of any bad spritis before Lent begins on Ash Wednesday.  I'll write on these and our weekend next time and will include a couple of the traditional dishes served.  Narri, Narro!
Posted by Janet MacDonald at 8:29 AM