Advent: A Time for Contemplation and Celebration 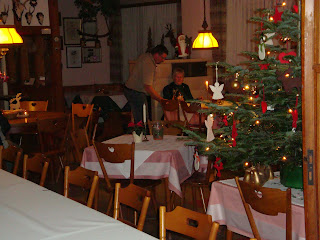 Advent is the period in which we anticipate and prepare for Christmas Day, the holy day of Christians around the world.  Though it is a religious period in celebration of the birth of Jesus, it is also a time to enjoy those weeks leading up to Christmas.  It is historically the beginning of the Church year for most Western churches and begins on the fourth Sunday before Christmas Day, nearest 30 November, and ends on Christmas Eve, 24 December.  (Should Christmas Eve be on a Sunday, it is the fourth Sunday of Advent and Christmas Eve itself begins then at sundown.) 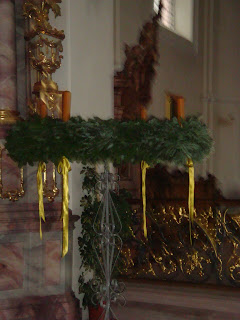 The Advent wreath is thought to have been first used as a Christian devotion in the Middle Ages.  The design was borrowed from the customs of pre-Christian people, primarily Germanic and Scandinavian, who used candles and greenery as symbols during the winter to represent light and life.  Today, the candles symbolize Christ's coming into the world.  As a child growing up in Prince Edward Island the word "Advent" was not used, except perhaps in the church.  We didn't know the Advent wreath, though we did place wreaths made from spruce boughs on our windows.  Here it is a special part of the Christmas season in most German households.
The picture at right is of the Advent wreath in St. Landolin's, the Roman Catholic church in our village.  The wreath is high above the floor, set on a tall holder.
The Advent candles below were at the Krone Gasthaus in Allmannsweier, where we had a group Christmas lunch this week. 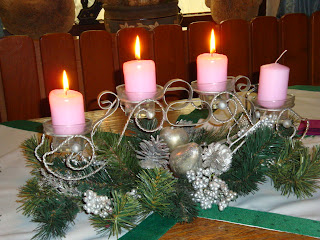 Although there can be variations in shape such as four candles mounted side by side as on a log or similar long base, the traditional wreath is a circular evergreen with four candles, representing the four Sundays of Advent.  The circle represents never-ending spiritual life, the same meaning as for wedding rings.  The wreath may hold three purple candles and one rose (purple is the liturgical colour and the colour of royalty).  Some churches use five candles, with a white candle in the centre, which is lighted on Christmas Day.  Some Protestant churches use blue candles.  Many now use red, gold or pink, with red being the colour most often seen today in our region of Germany.  Last year, ours were white; this year, red, our colour of choice.  In St. Landolin, the village pilgrimage church, the candles this year are gold.  Red and green are more secular colours of Christmas and for most of us define this special time of year. 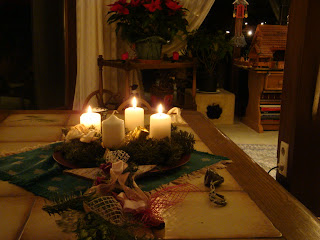 The picture at right shows our Advent wreath from 2009, using white candles.
Advent is the time for decorating the church and home with wreaths, boughs or trees.  It is a time when families gather together around the table--often the coffee table--to light the candles on each successive Sunday leading up to Christmas and to enjoy special sweets.  We, like most others, light our candle at about four o'clock on Advent Sunday afternoon.  On 1st Advent, one candle is lighted; on 2nd Advent, the first one plus a new one is lighted.  Thus it goes until 4th Advent, when all four candles will be alight.  Each successive week may be defined as Hope on 1st Advent, then Peace, followed by Joy, and then Love on 4th Advent.
The season is also the time when baking permeates the house and children excitedly await the Weihnachtsmann or Santa Claus.  It is a time for Christmas markets, bazaars, special meals and parties and a time to wish family, friends and neighbours a Happy Advent and a Frohe Weihnachten/Merry Christmas. 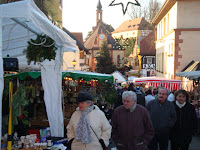 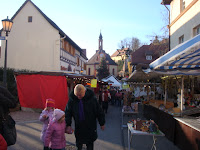 These five pictures showcase a little of the Christmas market held in Mahlberg, a town near us, this past Monday.  The bottom two show Hans buying hot chestnuts from an elderly gentleman whose dog is curled up at his feet. 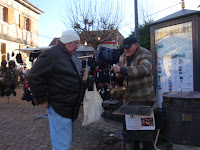 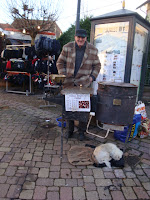 Hans is wearing a toque he bought that day. I also bought one to wear as it was cold out! 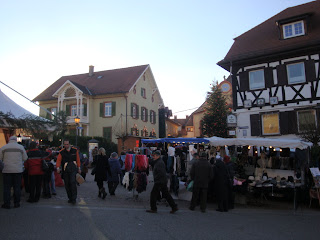 The following pictures are from our luncheon this past Wednesday at the Krone in Allmannsweier.  Each year the men invite the women to their weekly get-together in December. 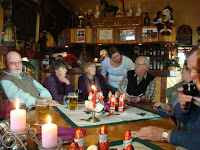 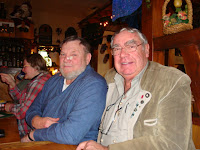 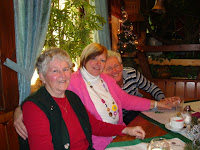 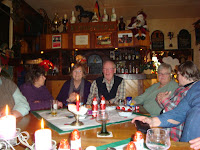 One of the meals served was Sauerbraten with boiled potatoes or noodles and red cabbage (Hans and I both had potatoes as shown).  See below. 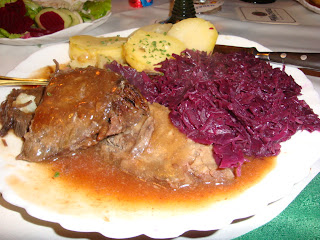 In our house I bake my Scotch cake (shortbread) and make cranberry sauce for our goose dinner as well as to give as a small gift.  German wives and mothers bake many special cookies and cakes, one of the best known being Stollen, a type of fruit cake.  We buy that cake each year from Dresden, the city where it became famous.  The picture below depicts the box in which the Stollen came. 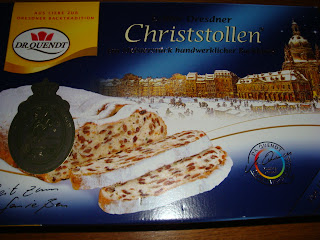 We also start thinking about the Christmas goose.  This year we have bought a goose that was raised in a proper environment here in Germany.  We have bought imported ones in the past.  As many of those are raised in cramped and inhumane conditions, we shall no longer get ours from outside the country but rather purchase bio-raised ones here.  Our goose is now in the freezer awaiting the big day.  If any of you would like to try roasting a goose for Christmas rather than a turkey this year, but are not sure how to do it, this is how we roast ours.  The one below was our 2008 goose, just out of the oven. 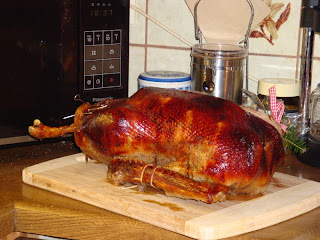 Wash it well, inside and out, with cold water.  Dry well.  Any excess fat around the neck opening can be removed, but it should be added to the roast pan with the goose.  (The fat will later be drained off for use in other cooking and for making the gravy.)

Salt the inside only.  Stuff with dressing of your choice (we prefer Canadian-style sage and bread dressing; Germans generally add various fruit to theirs) and skewer or sew the openings together.  Truss it as you would a turkey, with string around the wings and legs to keep them close to the body.

Preheat the oven to 400F/200C.  Set the goose, breast down, on a rack in the roast pan.  Add about three cups of hot water to the pan, along with two apples, halved.  Cover the pan.  Roast for about an hour, then turn the goose so that it is breast side up; pour a little more hot water into the pan; cover it.  About halfway through its roasting time, insert the tip of a sharp knife between the leg and body of the goose to remove some of the fat.  Continue roasting for 2 or so more hours, basting several times with the pan juices/fat.  (Check for doneness occasionally as roasting time also depends on one's oven.  It could take less or more time to cook than mentioned above.)

Note:  We don't drain the fat from the pan until the goose is cooked, though you can.  If you do remove it from the pan, reserve the fat; don't throw it out.  It is great to add to Sauerkraut or Rotkohl (red cabbage) or in other cooking.  A little can also be used to make more gravy for leftovers after Christmas.

About twenty minutes before the end of its roasting time, mix about 1/2 teaspoon of salt in about 1/4 cup cold water and brush it over the goose.  This helps to brown and crisp the skin.  When the legs move easily or the fat runs clear or yellow, the goose is done.  Remove it from the roast pan.  Let it stand a few minutes before carving, during which time the gravy can be made.

Gravy:  Remove most of the fat from the pan into a heavy pot.  Place the roast pan with the remaining fat over two medium hot burners; stir the fat and any brown bits well over the heat until combined and browning.  Stir in some flour (1 or 2 tablespoons to start) and continue stirring until well mixed, doing it quickly so as not to allow it to burn, but just until it is brown.  At this point there is no liquid in the pan, just fat.  Pour into the pan some chicken broth, water or vegetable broth.  Stir continuously until boiling and then simmer it until thickened.  If it doesn't thicken, mix and stir together a spoonful of flour with some cold water, then add it slowly to the pan, stirring continuously with a whisk.  If it thickens too much, add more liquid.  Season to taste.  If you wish, add some whipping cream (heavy cream) to the gravy before serving.  We usually do as it makes for a smooth sauce--and also very good.  Note:  The leftover goose fat in the pot can be frozen to use at a later time. 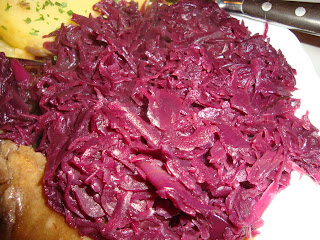 Cut cabbage into quarters; remove core; finely slice.  Place in a deep cooking pot with 1 onion, finely diced.  This will make a lot, but as it freezes well, it is worth it.  Add the following:

Bring the mixture to a boil and then simmer for about 1-1/2 to 2 hours.  Make sure there is sufficient liquid so that it doesn't burn; if not enough, add some water.  Stir occasionally so the spices are kept covered and to ensure the cabbage doesn't stick to the bottom of the pot and burn.  Taste, as you may wish to add more sugar, spice or vinegar. The taste should be slightly sweet-sour.  The cabbage should still have some bite, so don't over cook it.  You want it tender, but not too soft.  Remove bay leaves before serving.  Red cabbage is excellent with Sauerbraten, wild boar and other game as well as goose.

Note:  If you wish, instead of a whole cabbage, use two large glass jars (or tins) of ready-made red cabbage.  You can buy this at the supermarket (two 28oz cans/800 to 1000mL size).  If canned cabbage has apple in it, reduce your apples by one.  Follow the recipe as given, though it might take a little less cooking time.  Check for doneness and taste beforehand.  I freeze any leftover red cabbage in zip lock bags. 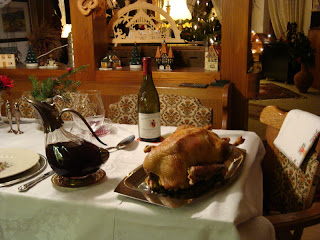 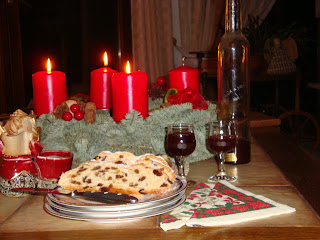 Third Advent Sunday with a special wine and some Stollen

Posted by Janet MacDonald at 4:11 PM