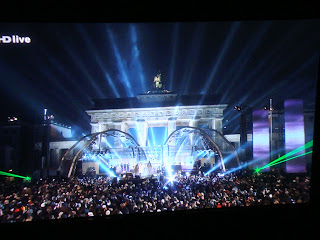 The New Year has arrived as seen above, live from Berlin on TV on the 31st.  People celebrated everywhere in Germany and around the world as they awaited midnight.  The pealing of the church bells and fireworks going off announced the arrival of 2011 in Germany.  Of course, radio and TV stations counted down to the stroke of 12 with party-goers cheering and hugging and wishing one and all "Ein gutes Neues Jahr."  The picture below was also on the Berlin TV station, RBB. 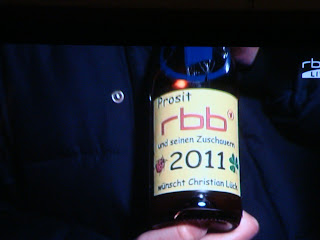 That afternoon, we went out for a while to one of our local Gasthäuser, sitting at the Stammtisch with some of the regular Gäste (customers) who had stopped in, as we had, to wish the Wirt and Wirtin, Erich and Sylvia, a "guten Rutsch," a saying that wishes someone a "good slide" into the new year. 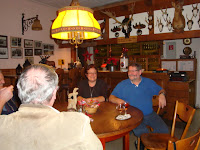 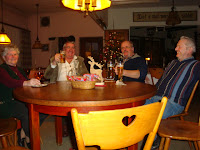 On the left, Sylvia and Erich.
On the right, Hans and I with two acquaintances, regular Gäste at the Gasthaus.


We stayed at home New Year's Eve to welcome in the new year.  Those years that we don't go out to celebrate, we watch some music programs during the evening; we watch, as well, the sketch "Dinner for One."  This is its 40th year on TV and all the non-advertising stations show it--most of them twice--on the 31st.  People from all over Germany tune in.  It is in English and without sub-titles.  Forty years ago NDR TV station (in northern Germany) showed it for the first time.  They had made a contract with an English cast of two, both well-known British stars at that time:  May Warden and Freddie Frinton.  It has become a tradition on Sylvester Abend (New Year's Eve).  It isn't known in North America I don't believe, nor even in England, but it is certainly known in the German-speaking countries of Europe:  Germany, Austria, Switzerland, Luxembourg, Lichtenstein and, I think as well, Holland.  The film is in black and white. 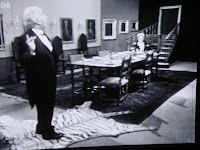 The quality isn't good here (the film itself is clear) but you can get an idea of the setting, which is in an English-style dining room in a mansion, with a long table, five place settings on it.  Four are imaginary guests, but real to Miss Sophie, who is celebrating her 90th birthday.  James, the butler, serves the several (imaginary) courses and always with a different wine, liqueur or Champagne.  Those are quite real!  He makes sure all glasses are filled and all are are empty after each course.  He, of course, drinks them to make sure of that!  It is hilarious as he becomes more and more unsteady on his feet. 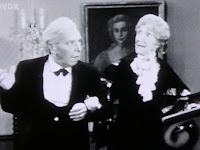 The picture at right is the scene at the end where James helps Miss Sophie up to bed and, according to the words repeated before each course, "The same as last year, Miss Sophie?" and her response, "The same as every year, James."  With a wink from James, up the stairs they go together.
On New Year's Day we decided to have a meal that was easy without too much work afterward, but one we both have enjoyed over the years.  We had thought about a meat fondue but decided on Heisse Stein (hot stone), which is similar, except that the meat and vegetables are cooked at the table on a hot stone and not in hot fat or broth.  Heisse Stein was popular here in the 1980s and occasionally was offered at a Gasthaus.  That is not the case today and one is hard-pressed to find one to buy at a store now.  The stone, which is heated first in a hot oven, rests on a rack on the table, under which are two burners that keep the stone hot while one cooks the meat and the vegetables.  It is a great way to entertain as it is laid back, fun and relaxing.  What I really like is that there are few dishes to wash up afterward and little mess--and that after a tasty and delicious meal. 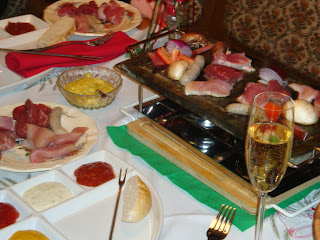 The uncooked meat is placed on a dish beside the one from which we'll eat the cooked meat and vegetables, with separate fondue forks used for adding the meat to the hot stone.

This year Hans bought pork fillet, steak fillet, turkey fillet and small Nurnberger sausages (we both love these; small Bratwurst with a spicier taste).  All except the sausages were cut into bite-size pieces.  He also bought some Schinken (bacon type) as it helps keep some fat on the stone and it is also very tasty.  As we can buy excellent fondue/heisse Stein sauces, Hans picked up four jars of them, plus some horseradish.  I made a sauce that I found in an English magazine years ago--a garlic/curry mayonnaise--one that we both like very much.  For vegetables, we had red peppers, mushrooms and red onions (the latter cut into quarters).  We have sliced French baguette to go with the meal. 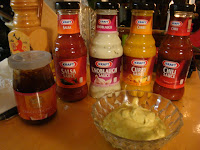 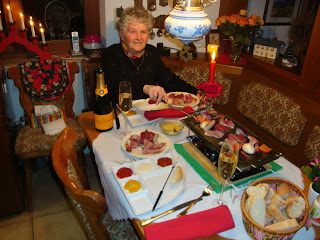 My recipe for garlic and curry mayonnaise is fast and easy to prepare.  It is best made early in the day so that the ingredients meld.  I made half the recipe and we still had some left over.  Here is the recipe:

Peel and crush garlic to a smooth paste with a little salt (in a mortar with pestle if possible, as I do).  Mix the garlic into the mayonnaise; add the chopped chives and curry powder.  Stir well and refrigerate until ready to use.  This will keep in the fridge as a bottle of mayonnaise will, but I would use it as soon as possible.  Any leftover sauce can be used on the side with pork, chicken or Bratwurst sausages.  A picture of it is shown in the glass dish above.

With our meal we had a bottle of Champagne, a Clicquot Brut from Reims, France. 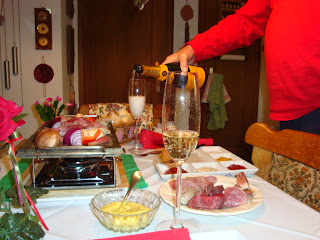 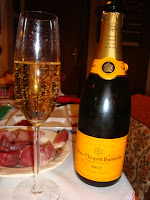 The House of Veuve Clicquot Ponsardin was founded in 1772 in that city.  I really enjoyed this quite expensive Champagne, though Hans was not quite as enamoured as I.  German Sekt (a Champagne equivalent) can have more flavour, as often only one particular grape--though not always just one--such as Riesling or Scheurebe, both of which can be strong in flavour, is used.  The Clicquot is a blend of three grapes:  Pinot Noir, Chardonnay and Pinot Meunier.

To finish dinner, we had mousse au chocolat for dessert.  This is one of my favourite desserts to serve as it feels light (though not in calories!) and can be made a day ahead. 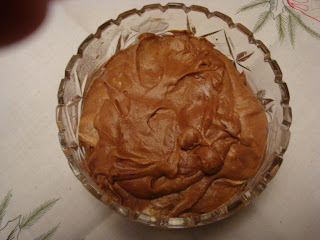 I have made many different recipes for chocolate mousse over the years but have a couple of favourites, both of which can be frozen, including this one.  The one this year was from the Winnipeg Free Press in the 1970s; however, I have made changes to it with some additions and deletions.  I halve the recipe for the two of us; it normally yields six servings. 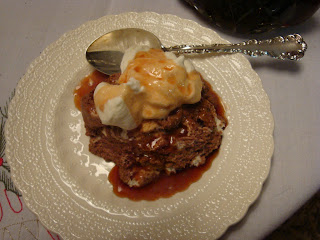 Beat the yolks until they are thick and lemon coloured.  Stir in 1/4 cup sugar and the Grand Marnier.  Place over hot water.  Stirring constantly, heat until thickened and smooth.  Place in a pan of ice water or in very cold water in the sink; beat 4 to 5 minutes longer or until as thick as mayonnaise.

Melt the chocolate and the water over hot water.  Stir until smooth.  Add the butter in pieces gradually until the mixture is smooth and creamy.  Blend this into the egg yolk mixture with a spatula.

*Beat egg whites until soft peaks form; gradually add the remaining 1/4 cup sugar, beating until it forms stiff meringue or peaks.  Fold this into the chocolate and egg mixture.  At this point, I fold in some whipped cream as well, a good 1/2 cup to 3/4 cup, whipped.  Spoon into a crystal or cut glass bowl or into individual punch cups and chill until set.

Note:  *You can leave out the egg whites and just use whipped cream (as much as you wish).  I don't always use the egg white and sugar mixture, although I did this time; sometimes I use just the whipped cream, with some sugar added to it, especially if using non-sweetened chocolate instead of semi-sweet. 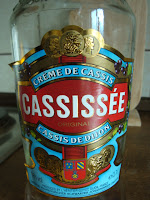 To serve the mousse, top it with a dollop of whipped cream and some Cassis (add a little sugar and vanilla to the cream when whipping it).  The Cassis, to us, really is the finishing touch as it adds contrast and sets it off.  Creme de Cassis comes from Dijon, France.  (One of my recipes calls for Creme de Cacao, but we prefer the Cassis.) 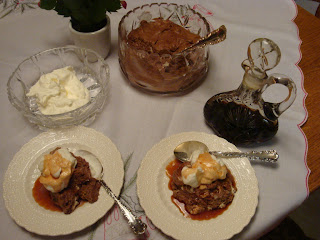 Posted by Janet MacDonald at 5:37 AM