Celebrating with the French Foreign Legion 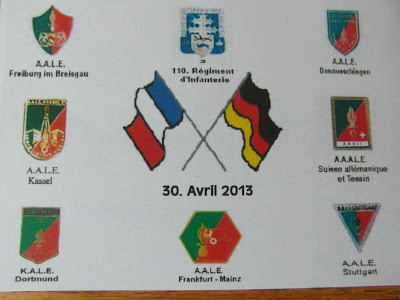 At the end of April this year Hans and I attended a memorial celebration of the Legion Etrangere Francaise.  We had been invited by a former member of that renowned army, a friend of ours, Heinz Duchardt, a highly decorated veteran for bravery and now President AALE Freiburg.  This took place in Donaueschingen at the Kaserne Foch.  We had attended a similar celebration last year but this time it was a special one:  the 150th year of the great battle, Combat de Camerone, that took place in Mexico on 30 April 1863.
The following is from the official website of the French Foreign Legion (FFL):  "In Mexico the French Foreign Legion won one of its greatest titles to fame.  At the Camerone Hacienda near Puebla, three officers and 62 legionnaires resisted 2,000 Mexicans.  After a day of fighting, the last five survivors fixed bayonets and charged.  This battle, whose name adorns every Legion flag, remains the symbol of a mission carried out to the bitter end."
This was the battle, shown below, we were there to commemorate and one that is celebrated each year by all legionnaires. 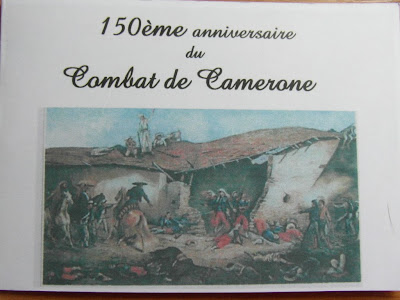 ﻿
From Wikipedia, and in some of my own words, the following:  "That battle was led by Capt Jean Danjou, his officers and legionnaires who were escorting a convoy to the beseiged city of Puebla when they were attacked.  They were forced to defend in Hacienda Camerone, fighting almost to the last man.  The three who remained at the end of the battle were allowed to return to France as an honour guard for the body of Capt Danjou.
As a note of interest, the captain had a wooden hand which was stolen or went missing during the battle.  It was later returned to the Foreign Legion and is now kept in a case in the Legion Museum at Aubagne and paraded annually there on Camerone Day.  It is the French Foreign Legion's most precious relic."
As the French Foreign Legion itself advertises, whatever your origins, nationality or religion might be, whatever qualifications you may or may not have, whatever your social or professional status might be, whether you are married or single, the FFL offers you a chance to start a new life.
On the parade square at Kaserne Foch are retired FFL members and serving and present members 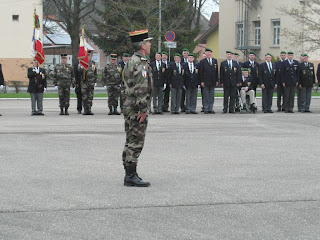 ﻿
﻿
Whether restoring or keeping the peace or exercising crowd control, the Legion has been able to adapt to all situations in all theatres of conflict, including the Gulf War of 1990-1991; Somalia in 1992-1993; Bosnia, Kosovo, Macedonia in 1993 to 2003.  Today they are engaged in Afghanistan, Kosovo, Chad, the Ivory Coast.  The legionnaire's code of honor guides him wherever he may be asked to serve:  in France or on operations abroad.  From the general to the merest private, all legionnaires have one purpose:  to serve France professionally and well.  After three years of service, a legionnaire can ask for the French nationality and may also be entitled to a French resident permit if he has obtained a certificate of satisfactory military service.   The resident permit is valid for ten years and is renewable.
Invitation to the commemoration
﻿ 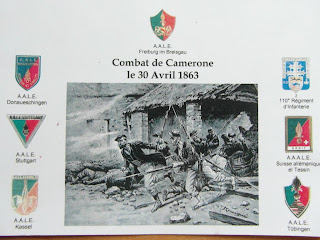 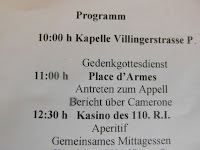 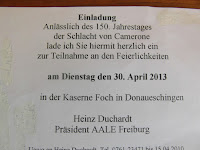 On 30 April 2013 we drove to Donaueschingen, the city where the Donau/Danube River begins.  It is about an hour and half's drive southeast of us and east of the Rhine River that flows along Germany's western border with France.  The legionnaires have veteran associations in five cities in Germany that form the 110th Regiment d'Infanterie; along with Donaueschingen, they are Freiburg im Breisgau, Kassel, Dortmund, Frankfurt-Mainz and Stuttgart.  The FFL headquarters is in France and, of course, legionnaires are based throughout that country.

An interesting fact is that about 40 per cent of all French Foreign Legionnaires come from Germany.  When our friend Heinz Duchardt served, 70 per cent were Germans, most of them prisoners of war during World War II.  Heinz is now over 80 years old.

The Headquarters and French Foreign Legion Museum is located in Aubagne, a village situated in the southwestern part of the country, between Aix en Provence and Marseille.  In the village of Puyloubiers, about 30 to 40 kilometers north of Aubagne, is the Legion retirement home  and a museum as well.  Many legionnaires are buried in its village cemetery.  According to what I have read, there is no cemetery in Aubagne.
Heinz Duchardt, President AALE Freiburg, at the podium 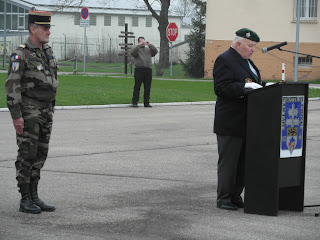 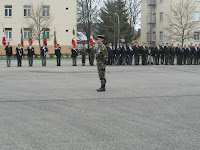 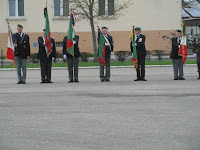 The celebration on this special day began with legionnaires on the parade square at Kaserne Foch in the heart of Donaueschingen.
After the parade, we gathered at the Kasino for drinks before heading to the dining room for a buffet. 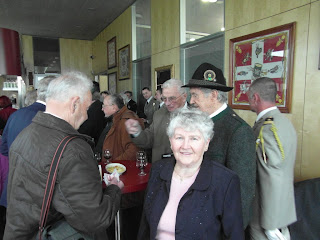 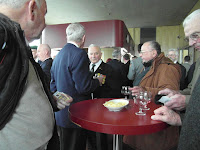 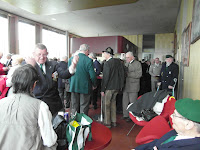 At left, Hans in his green Queen's Own Blazer; on the right, the gentleman at the table, 2nd from the left and facing, is Heinz Duchardt, president of the Freiburg Legion group. 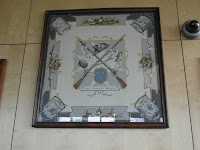 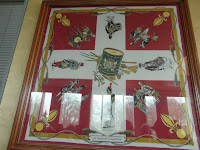 Two paintings depicting the French Foreign Legion
﻿
We all then headed to the dining room and after a short speech, we were served Blutwurst (blood sausage) along with a large Brötchen (a crisp roll).  The sausage is traditionally served at the table before the buffet begins.  In 2012 a bowl of sausages was placed on the table; this year, we were served individually.  Standing by their places at the table, a special song was sung by all legionnaires present and at its conclusion, we all toasted those brave former Legionnaires with red wine. 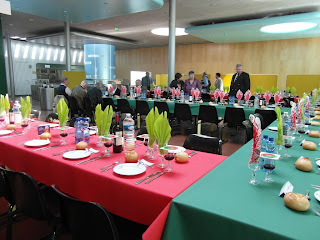 Blutwurst in a bowl at the table in 2012 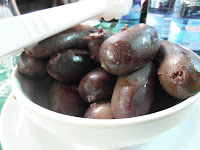 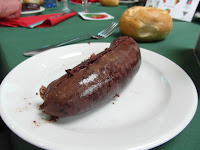 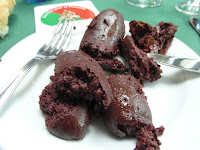 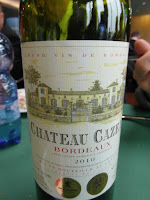 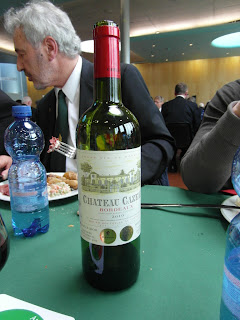 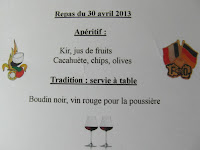 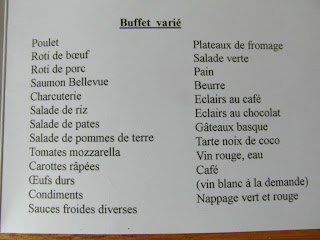 After the traditional formalities were completed, the buffet began with huge platters of meat, fish and fowl plus bowls of various salads.  As a platter or bowl was emptied, it was refilled.  Dessert included such things as chocolate eclairs, coconut tarts and Basque cake or torte.  (The Basque area in France is located in the most southwest corner of the country.)  The red wine flowed and as bottles were emptied at the tables, they were replaced with full ones.  White wine was available if desired.  Coffee was served at the table.
Following are some of the buffet offerings:
﻿
﻿ 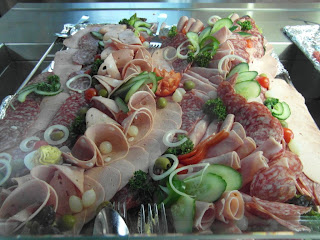 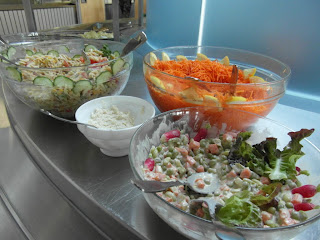 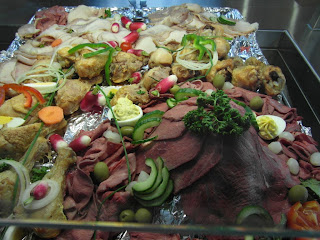 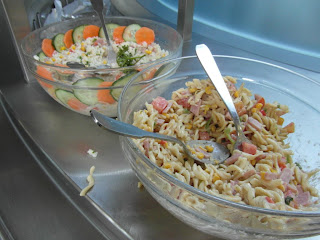 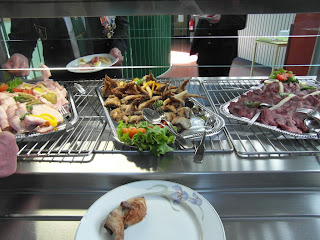 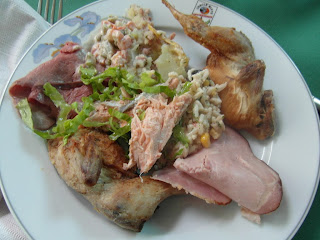 This special celebration was a day to remember and to honour those who had made sacrifices on the field of battle.
﻿ 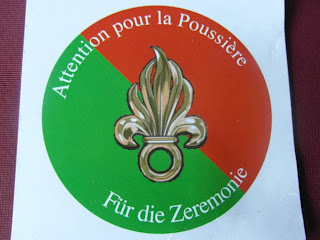