A Great Time Was Had, but All Good Things Come to an End (Part 3)

My sister Carol's last couple of days here in Germany were full as were the previous ones.  As Hans had had a birthday before she arrived, she wanted to treat him to a nice dinner at a good Gasthaus. So reservations were made at Gasthaus Zur Krone in Mussbach, one we know well.  The Gasthaus is rustic and warm and the food is excellent, with the former Wirt's son now the chef and Wirt.

Carol and I at our table 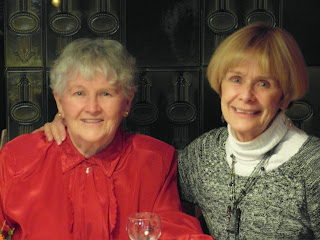 The chef's wife, now the Wirtin, took this picture of the three of us 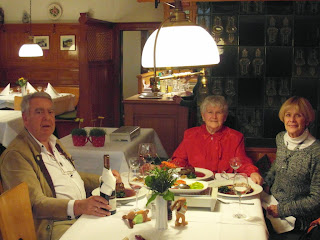 The lovely wood panelling can be seen in the background.  We are seated next to the Kachelofen (the tiled heating stove), so it was cosy and warm.

Hans and I had filet steaks with sauce Bordelaise (a red wine sauce).  Superb! 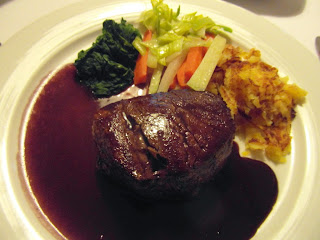 Carol had a chicken dish with a delicious sauce.  Both were outstanding. 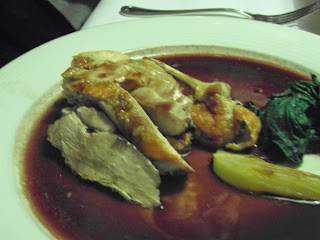 Our dinner began with salad followed by the main course, which included a platter of fresh vegetables and Rösti, which are grated and similar to Bratkartoffeln. The vegetable and potato platters were refilled and both were excellent.  Everything was full of flavour.

The picture below right is dark but it gives a view of our table and and the platter of Rösti.  The Wirtin is behind the table.  This was indeed a special meal and one we all truly enjoyed. 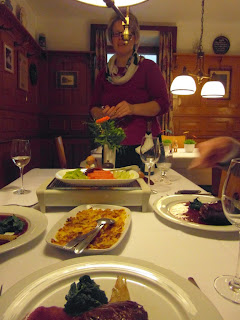 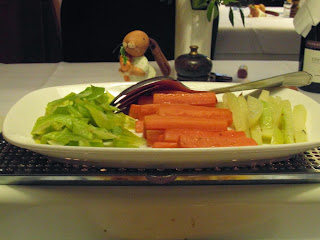 The following day was Carol's last day before leaving Germany.  We had dinner at home that night and enjoyed the first Spargel of the season.  Hans had been lucky to find some as the weather had been too cool for it to show its tips in the asparagus fields.  White Spargel is harvested just as it shows its tip at the surface.  It was German Spargel and excellent.  The season is short and by accepted regulation can only be served fresh in a Gasthaus or restaurant for approximately two months in the spring.

Dinner being served, with Carol receiving the first white asparagus of the season. 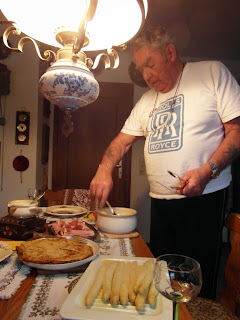 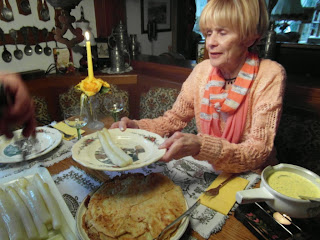 With the Spargel we always enjoy the same accompaniments:  Boiled new potatoes (traditional), Kratzede (at a Gasthaus you will likely get one or the other, but not both, unless you order extra).  These are almost my favourite part of the meal; a Spargel dinner for me would not be the same without them.  Then, three types of Schinken (ham):  smoked, partially smoked and unsmoked.  Also traditional.  And, of course, a sauce for the asparagus (I put it on almost everything!).  We both love hollandaise with it, although Hans' usually is more like a Bearnaise sauce and it is excellent.  As I write, I can almost taste that dinner!

Below left:  the Kratzede (crepe) and the sauce in particular.  This was my plate and I started with unsmoked Schinken.  On the right, a view of the table and Carol checking it all out.

This was a fitting ending to her visit with us and one we shall all remember for a long time. 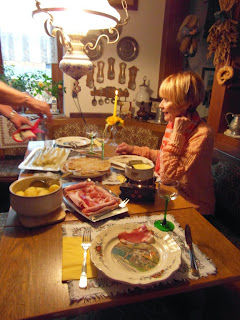 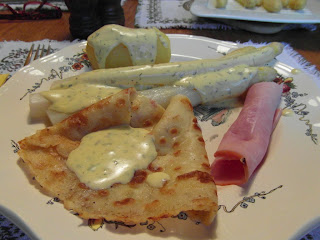 The following morning we three drove to Frankfurt for her to catch her flight to Boston.  She had a three-hour delay due to her Lufthansa flight being overbooked.  We didn't know that until later.  Her flight to Germany was also complicated because Lufthansa was on strike; that flight was cancelled shortly before she was to depart by car to the airport in Boston.  Luckily, Air Canada stepped in and found her one with them.  She and we were fortunate that she actually made it. No thanks to Lufthansa.

Late the following day, Jean arrived back.  For the next week, we ate well, did a little more driving in the countryside and enjoyed the time together.  As she always does, a little more shopping was managed.

One evening we had a spaghetti dinner at home.  Hans makes the best you'll have I think (as do many others!).  Along with it, the traditional garlic bread and a salad.  The wine was a bottle of Chianti from the Toscana, one we usually have with a spaghetti dinner as we find it compliments Spaghetti Bolognese best. 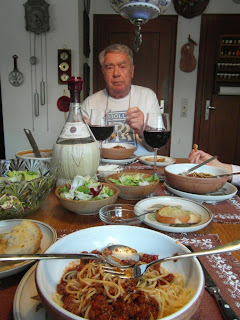 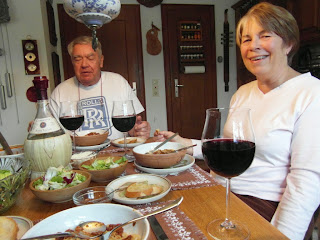 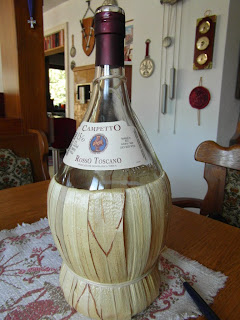 On another evening, we had Spargel once again, as Jean loves it.  Hans was again lucky to find it.  In the interim, after our first meal with Carol, he had seen no German asparagus in the stores. 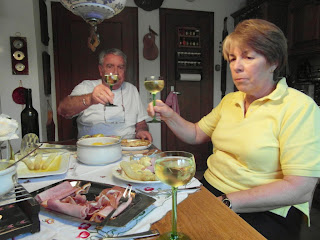 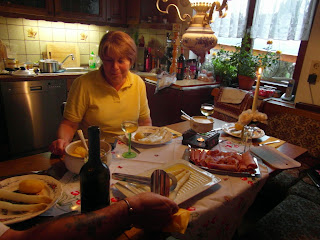 During Jeans stay, she and I headed to Wittenweier to see the Easter display as she had never been.  The sign above the well says: Water is Life and it surely is.  The town dates back to the year 1270. 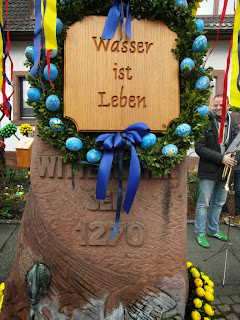 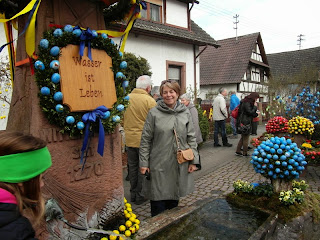 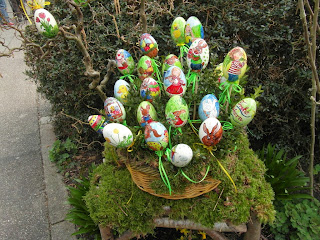 We had noticed a few benches set up and a table with a tenting above it.  The table was filled with cakes, so we decided to have a look and perhaps purchase a piece.  The lady serving said that there was no charge for the cake and coffee, but if we wished to make a small donation, just to put it in the can that they had attached to a fence.  The cakes were all made by the ladies in the village to raise a little money for the Verein (an organization that helps out at various Fests and so on).  So, we both asked for a piece and some coffee and, of course, added some money to the can. 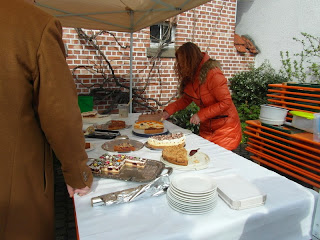 We had one last dinner out that evening as Jean departed the following morning.  Jean, Hans and I went back to the Linde for one more time for Jean to have their chicken, as she loves it as much as I do. 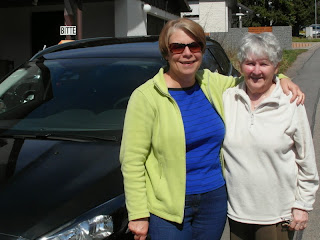 And down the hill she went! 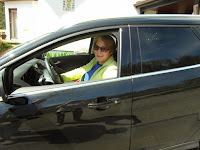 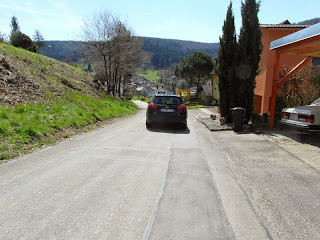 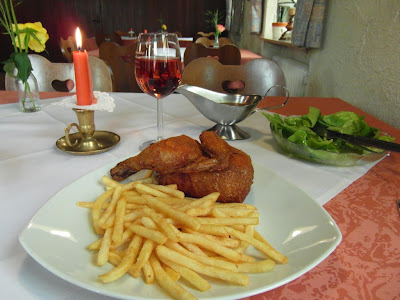 Posted by Janet MacDonald at 2:45 AM