To Tempt the Appetite: Schnitzels and Other Offerings 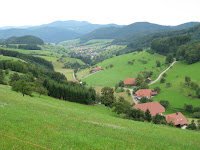 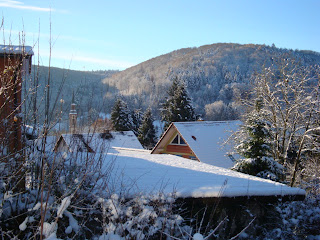 A summer day at left in the hills and mountains and first snow as seen from our patio this weekend, on First Advent.
The province of Baden-Württemberg is renowned for its food, its wine and its scenery.  It is the second most visited part of Germany--the capital Berlin being number one.  We can find elegant restaurants and simple Gasthäuser in all directions, some within a few minutes and others within half an hour's drive.  Mostly we look for the simpler places:  family-run, friendly and with "gut bürgerlisches Essen"--meaning non-pretentious, home-style cooking.  From time to time, though, we eat at a fine restaurant where the food is excellent, the menu is large and interesting, the decor and ambience are gemütlich.  Above all, we look for friendly service wherever we go.  We might return to a Gasthaus or restaurant where the food was not exactly as we thought it would be, but rarely will we return to one where the service was unfriendly, seldom though that is.  We do tend to give such a place a second chance, however, as anyone can have a bad day--just not two in a row!
The three pictures below are of Gasthäuser we frequent:  The Waldlust, Lieberatsbergstube and a Vesperstube in Yach, southeast of us, all of them in the countryside. 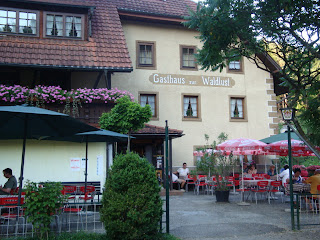 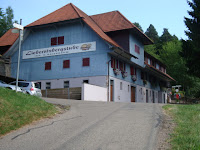 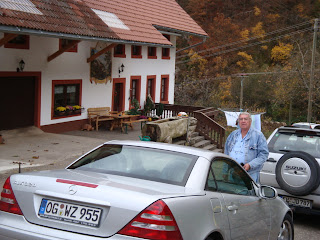 German housewives are very good cooks and most cook according to their local specialties and the seasonal produce.  Farmers' markets abound.  Many of the supermarkets buy from the local farmers as well.  Many housewives, especially in the towns and villages, have their own gardens, with some produce lasting well into late fall or early winter.  Right now, Feldsalat is in season and available everywhere, including in those gardens.

Sprigs of Feldsalat, the left one right side up, the sprigs on the right, showing the stem side & right side. 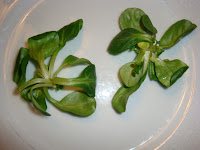 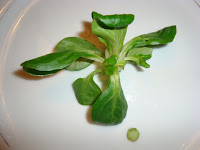 The bowl of salad below is without dressing, just with washed and ready leaves awaiting our supper last evening. 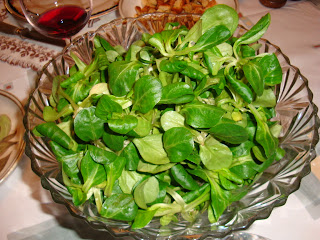 This is my favourite of all salads and it is offered at most Gasthäuser and restaurants at this time of year.  It is a green that requires cold weather and will be available until early spring.  The small leaves, tender and mild, form a circle around a stem.  It is usually served with a dressing that is made with mild vinegar, oil, minced onion, fried Speck (bacon cut into dice and fried) and herbs of one's choice (though sometimes no herbs), topped with croutons that are sauteed first in butter and sometimes in garlic.  Below is our salad of last evening, with dressing and croutons. 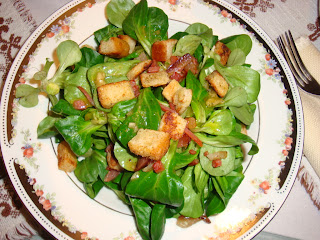 We had a simple meal along with a bottle of Beaujolais Premier 2010, which was very nice with the Feldsalat.  That wine will last perhaps a year. 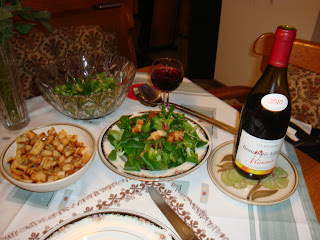 Schnitzels
The picture below is at the Zum Schwert in the hills outside Seelbach, a small town near Lahr.  This was from a year or so ago.  Helga and Wolfgang ordered Schnitzels with Zwiebeln (onions) and I ordered a regular Schnitzel paniert (breaded).  The portions are large as you can see.  Hans's Vesper can be seen at the edge of the picture. 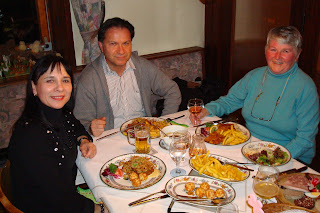 Gasthäuser serve mostly local dishes or typical German dishes known around the world, such as Schnitzel in all its many varieties.  Restaurants offer local specialties but also specialties from around the country and the world--though not always Schnitzel.  I am a Schnitzel fan.  Hans complains that I order it too often and don't try some of the other offerings; I do, though usually just not the ones he particularly likes, such as his favourite, a Vesper.  That is a cold meal--usually eaten in the evening, which is served on a wooden board covered by various sausages and Schinken (ham), some raw onion slices, a pickle or two and perhaps a wedge of cheese, all accompanied by a hearty bread.  A good Pils and a Kirschwasser (cherry Schnaps), both served at the same time are the preferred liquid accompaniments (helps the digestion is the excuse for the latter!).
I did have a Vesper this fall at a Vesper Stuben down a long, country road outside Elzach and the village of Yach. Below shows my board in front with a selection of cheese and Wurst.  Hans' board is just beyond.  This was a farm that also offered food, all made or produced right there, except for the cheese. 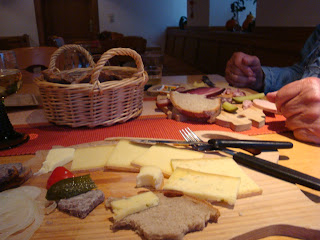 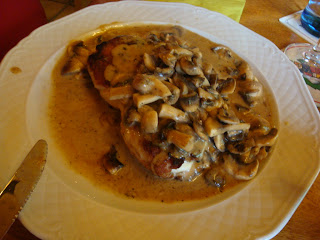 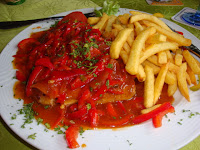 In our area, most Schnitzels are made from pork (unless otherwise specified).  They can be breaded or unbreaded ("paniert" or without "paniert").  Pork in Germany is of high quality and rigidly inspected.
A Wiener Schnitzel is always breaded and always made from veal.  If advertised as Schnitzel Wiener Art, it will be breaded but not necessarily veal.  We prefer the pork Schnitzels as they have more flavour we feel, though a Wiener Schnitzel in Wien (Vienna) is special and a must to have when visiting that beautiful city.
If you visit Germany, you will find that each type of Schnitzel will be somewhat different at each Gasthaus.  They all have their own way of making it, though all will follow the standard method.  Those with toppings or sauces, like Jägerschnitzel, Paprika Schnitzel, Zigeunerschnitzel or Schnitzel with a cream sauce will be different everywhere, as the quality of the meat is a factor, along with each cook or chef who will add his or her own touch to them, especially to the sauces.  Breading can also be somewhat different as an herb may be added (or not) to it before frying.  Below, my meal one evening last spring at the Lieberatsbergstube (picture of that Gasthaus at the very top).  This was a Schnitzel with sauce and Krauter butter (herb butter). 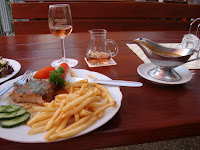 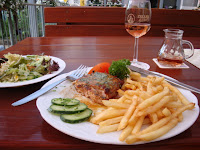 You must drive up the side of the mountain to reach this farm Gasthaus.  Luckily I met no other car on the way up or down, though the Gasthaus outside, where we all were, was packed.  Most had walked up!
I stopped on the way up to take this picture, looking back to the Schutter valley below 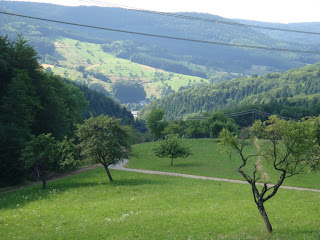 Martin, the chef and Wirt (owner) at the Gasthaus Engel in Dörlinbach--as well as being a friend of ours--cooks a special Schnitzel for us, a Zigeunerschnitzel (Hungarian style) paniert, which is covered in mushrooms, green peppers and onions and a delicious sauce.  We had asked him long ago if he would bread it first, rather than preparing it without breading, as is the norm and served that way at the Gasthaus and others.  He agreed.  Many years later, that is the way we still order it.  (In the early 1970s, at a Gasthaus just north of Lahr--now closed--I had breaded Jägerschnitzel, which was unusual, as that Schnitzel is also served without breading, just with the mushroom sauce.  It was delicious.  I never forgot it--nor the huge mushrooms with which they covered the Schnitzel.)
On the left, a platter of Zigeunerschnitzel (4 Schnitzels on it, covered with vegetables and sauce, for two people).  The plate on right shows one helping with some French fries and potato croquettes. When my sister Carol visited us from New Hampshire in the United States, this was her favourite meal.  Ours, too! 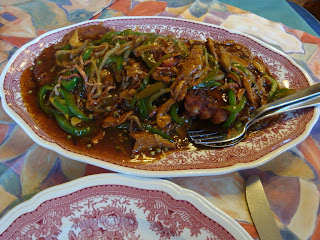 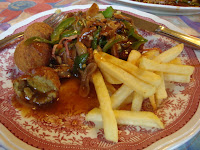 Another favourite of mine is Schnitzel with a cream sauce and the very best one I've had is at the Deutscher Hof in Biederbach.  Ruth's is superb, the sauce rich with cream and full of flavour.
One that has stayed in my memory from the mid 1970s was served at the Gasthaus Löwen in Mahlberg, a Gasthaus that is now closed, run then by a lady who was close to 80 years old.  Hers was much like Ruth's is now, with a delicious, creamy sauce.  It was her side-dish of potatoes that brought many customers there as well:  Bratkartoffeln (pan-fried potatoes) that were served in individual small casserole dishes.
One gets to know where the best Schnitzels are served, including where the best regular Schnitzel is served, the one that is breaded and fried in the pan, without any embellishment other than lemon and parsley.  A Cordon Bleu is really two pork Schnitzels making a sandwich of a slice of Schinken (ham) and a slice of Swiss cheese.  It is usually made from veal (though I generally prefer a pork or chicken Cordon Bleu).  The best is served at the Gasthaus Grünen Baum in Keppenbach where they also have the best Vesper, according to Hans.  Unfortunately it is now closed due to illness of the Wirtin (lady owner).
The picture below shows a Cordon Bleu in the background and a Paprika Schnitzel in the foreground. 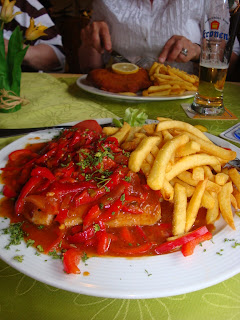 Another excellent Cordon Bleu, going back to the early and mid 1980s, was at the Kaiser in Sulz, now closed.  That was Hans' and his son Heiko's favourite Gasthaus.  Many of these closings are due to the children of a Gasthaus owner not wishing to carry on that family tradition, thus the Gasthaus discontinues as such.  Often they are taken over by foreigners who offer Italian, Turkish, Greek or Chinese food instead, which means one less German Gasthaus in the town or city.   Also, the many fast food outlets everywhere mean fewer customers at the regular German Gasthäuser.  Luckily we still have plenty of the latter in which to eat, particularly in the country and away from the big cities.
To Cook a Schnitzel
You will find a recipe on how to prepare and cook a Schnitzel in many cookbooks.  Here is one way:
Pound a boneless pork cutlet until it is fairly thin, though not too thin.  Dry it well.  Season with salt and pepper.  Dip each cutlet into some flour and then shake it gently.  Dip it into a mixture of a slightly beaten egg and a little water.  Then dip them into fine breadcrumbs.  Let them rest for 15 to 20 minutes.  Heat about 1/2 cup or so of butter or other fat (butter gives the best flavour) in a frying pan.  (Clarified butter is best as it doesn't burn as easily.  Melt butter in a pan over low heat.  When completely melted, remove from the stove and let rest until the sediment has gone to the bottom.  Skim the butter fat from the top and strain what remains into a dish or jar.  Use that butter for frying.)
Fry the cutlets in the butter until golden on one side; turn and cook the other side until it is golden and the meat is cooked.  Place them on a platter and top with lemon slices and parsley.  Serve individual lemon quarters with each Schnitzel.  (Many deep-fry their Schnitzels rather than pan-frying them, especially when cooking a Wiener Schnitzel.)
First Advent and the lighting of the first candle on our Advent wreath.  We enjoyed a glass of Sekt (German Champagne) and some special German sweets.  Enjoy the Advent season! 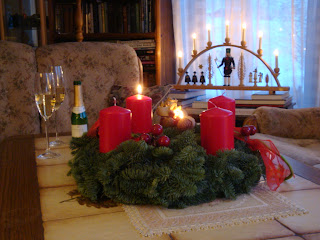 I shall have another blog posted  soon, once again on food specialties we enjoy here.  Click on any picture to enlarge it and then click on the arrow at the top left corner to return to the blog.
Guten Appetit!
Posted by Janet MacDonald at 6:14 AM