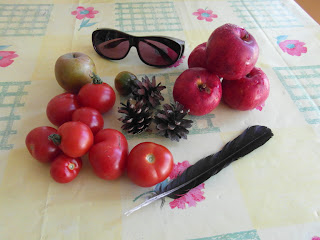 This has been a busy summer here in Nova Scotia and soon I shall be leaving and heading back to Germany.  I had car problems and mower problems most of the summer.  One car almost burned up and was a write-off and another had a dead battery--as did both mowers.  Now, when almost time to go, those things have been solved.  All I can say is "Thank heavens!"


A blue jay checking out supper! 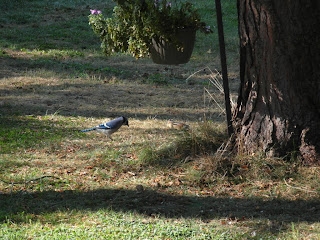 The birds are getting ready to fly south; in fact, some of them already have.  A large flock of blackbirds stopped here a day or so ago and robins are also stopping by enroute south.  Whenever I see them, I think of my childhood in Charlottetown and awaiting their arrival.  We always thought of the robins as the harbingers of spring.  I hadn't seen the humming birds for over a week but just five minutes ago, one was at our humming bird feeder.  I shall keep the feeders out until I leave in case any others stop by.  I throw bird seed out on the ground and into the other bird feeder during the summer, but I shall slow that down gradually over the next week.  The crows are always waiting as are the blue jays and doves, but it's now time they headed elsewhere for their sustenance.
﻿ 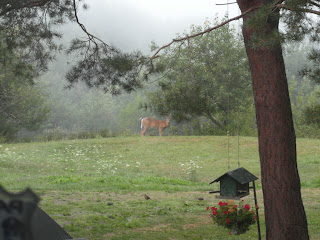 Yesterday Laurie--my brother-in-law--saw a large buck deer in a nearby meadow.  Many others, mostly doe, have been seen as well.  They love apples.  I have had a couple here this summer eating them right off our trees.  You can see one of them at right!  We didn't have many apples this year and those that we had were small due to the dry weather.  Laurie took some of his fallen ones over and spread them on the small crest of the hill near the house.  If the deer come, and I have no doubt that they will, I shall be able to watch them--always a beautiful sight.  I shall never understand how anyone can shoot them. 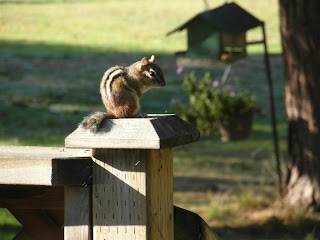 The chipmunks and squirrels are busily gathering their food to store for the winter months.  I have found some of it under the hoods of our cars, so I shall have to check there before putting them into the garage.  This little chipmunk is thinking it over on our deck!

When Hans was here in late spring and early summer, he had raccoons coming every evening.  I saw them only once.  He fed them; I didn't.  We didn't see or hear any coyotes, but Paula and Laurie heard them howling at night at their place.  A couple or so years ago I did see a couple of them at the edge of our property. 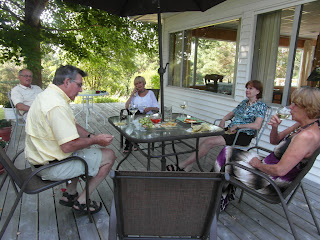 I don't think I've cooked as much in years as I did this summer.  Hans does the majority of it, but this year we came separately; so with lots of company coming and going, it was up to me.  We had many family get-togethers both here and at my sister Paula and Laurie's just up the road.  At one point, they had 12 people at their house for several days and that included six children and three dogs.  Glad I was here at mine!

The picture at right:  My three sisters and two brothers-in-law on our deck enjoying drinks before a casual supper.  It was Buletten night. 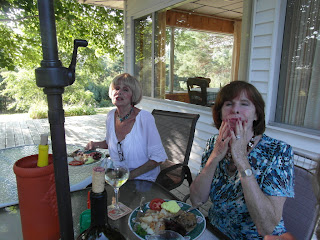 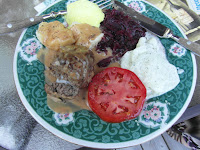 On the plate, Buletten (large beef and pork balls, which Hans had made for me and left in the freezer); red cabbage which he also left but which I added to, plus cucumber salad with fresh cream.  (The three recipes I have given previously on my blog.)  They were accompanied by mashed potatoes with gravy and a tomato for taste and colour contrast.

I served my pineapple squares for dessert (shown in the picture following), a favourite of my sisters, all of whom cooked and contributed wherever we happened to be, whether at Carol's in Hubbards, at Paula's or here at our house.  Anne, who lives in Toronto, and doesn't have a house in N.S., certainly did her fair share. Wine and beer flowed no matter where we were.  I'm surprised that I haven't gained any weight!

Dieter and Rosie, who live in Nuernberg, Germany but have a cottage on a lake near us in Nova Scotia, came one afternoon for coffee and cake. Rosie brought muffins and Alsatian Apfel Kuchen she baked--shown on the far side of the table (not really a cake, more like a pie; not really a pie either, but very good!). In the forefront are my pineapple squares (made for the second time). We are in our front porch. 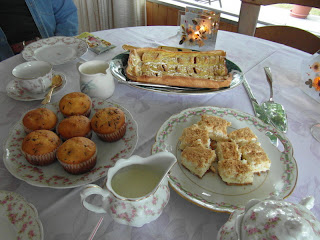 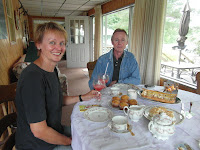 We celebrated a couple of big events in mid August--one day apart--at Paula and Laurie's: our sister Anne's and Laurie's birthdays.  Carol has a house in Hubbards on the Atlantic shores in the summer, so she was here as well for a couple of days, staying with me.  (I also spent an overnight with her in Hubbards.)

Below, Laurie and two of his granddaughters with his cake. 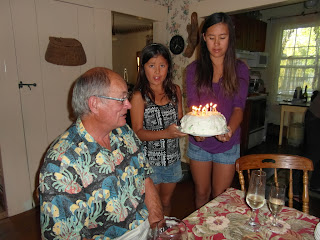 The birthday girl and her cake!  Carol watching and Paula doing the honours for Anne. 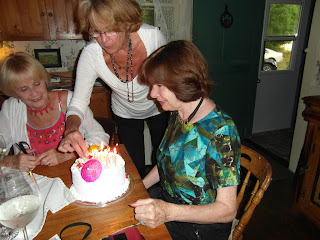 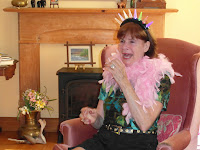 Below, shepherd's pie with ground beef and pork with herbs, vegetables and pureed potatoes.  This is a Canadian/British casserole that is a great supper or lunch dish.  Many pubs in Great Britain have it
on their menu.  I served this at lunch time to Paula, Laurie and our German friend, Dieter.  Rosie was back in Germany. 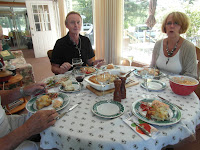 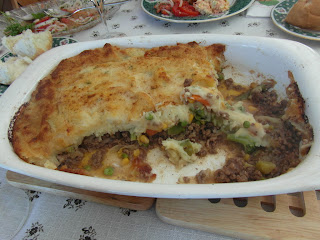 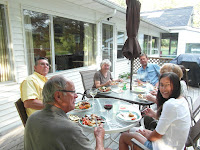 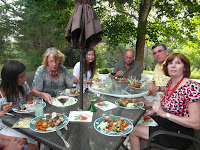 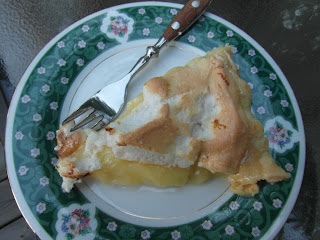 One of the super meals was hosted by Anne and Stephen at Paula and Laurie's:  a lobster feed! Note the lobster bibs on second picture below.  The lobsters were between 1-1/2 to 2 lbs each. 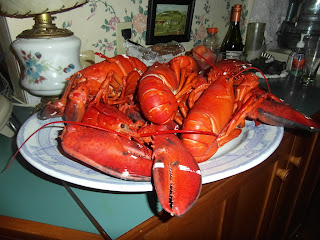 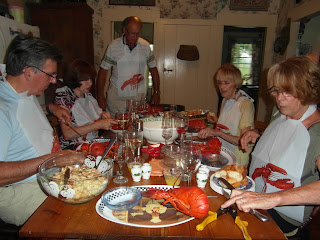 Another casual dinner I hosted here included spaghetti with sauce Bolognese, tossed salad and garlic French bread.  I followed Hans' recipe for the sauce and it was excellent.  It includes tomato sauce, red wine, herbs and spices, olive oil, Italian spices, a touch of sugar and Tabasco, garlic and onions.  Dessert was Alaska mint pie, a recipe I have had since the 1970s and one my sister Paula remembered having, thus the reason for it as a surprise.

In the two pictures below, we are sitting at the other end of our porch and enjoying the spaghetti. 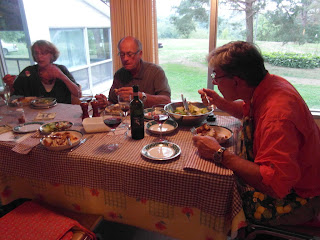 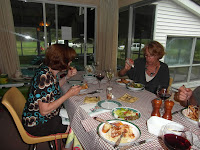 Cutting the Alaska Mint Pie.
It includes ice cream, whipped cream, Creme de Menthe, shortbread cookies and pecans among other ingredients.  I shall give this recipe and my pineapple squares at another time. 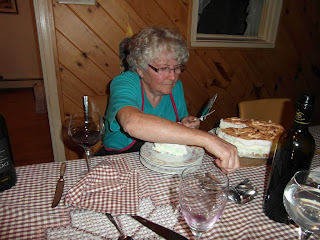 Most of the problems I have encountered have been solved.  It has been stressful at times as I don't usually have to tend to cars--and I don't want to either!  But it has been a great summer (minus the car and battery problems!) and one that is coming to an end.  All in all, lots of eating and good times.  I was so busy most of the summer that I hardly had time to get in touch with friends and family in the province.  I just began calling this week.

I look forward to being back in Germany, driving my car and being driven in Hans' but not having to worry about either of them.  The Oktoberfests are about to begin there and our first one will be two weeks after my return.  Friends will be arriving from Canada to join in the festivities.


A late summer's morning by our house 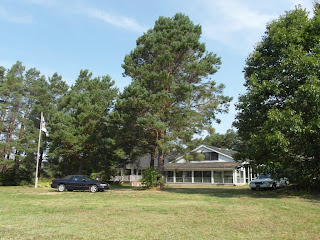 ﻿
Before I leave I hope to see a flock or two of Canada geese flying overhead enroute to their winter home. They land in nearby water and rest a while.  I'm not quite sure how early or late they leave their summer habitats, so I may not be that fortunate. We shall see.


The girls enjoying our pool on a warm summer's evening. 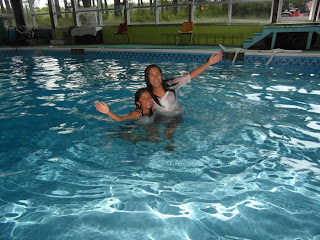 Enjoy the lovely fall days that are not far off.  I shall get to more blog writing and already have a couple in mind--but that will be after Oktoberfest time!