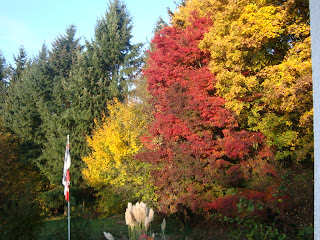 The beautiful days of spring with new growth soon become the lovely days of autumn harvest.  The leaves are just starting to turn here with rust, orange and yellow being the main colours.  We do get some reds, but nothing like in Eastern Canada and the USA as there are not as many maple trees here.  Nonetheless, it is still magnificent.

The picture at left is of the trees in our yard, taken last year in early November.

It is the time of year when one contemplates the outdoor work to be done before the colder weather is upon us.  Everyone, including us, is now readying the gardens for next spring, making sure bushes and hedges are trimmed and house plants come back onto the window sills inside.  I do look forward to winter here as it is relatively mild and rarely do we need snow boots or even snow tires, although the latter are required by law in mountainous areas after a certain date in November.


The trees shown are across the street, also taken last November. 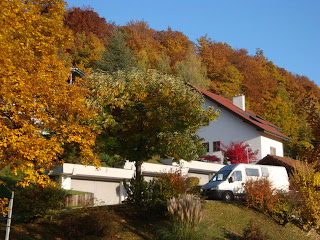 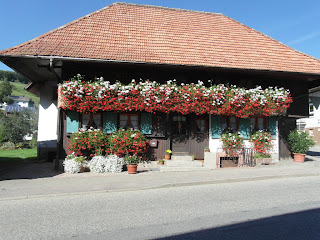 The mid October weekend is when most geraniums--the plant that symbolizes the Schwarzwald in summer--disappear from the outdoor boxes, hanging baskets and ledges.  It is a glorious sight as one drives through villages and towns in what is known around the world as the Black Forest.  Of course, geraniums fill boxes throughout Germany and France and many other countries as well, but the flowers along with the typical Black Forest houses add charm and atmosphere.  The house at right is in the town of Schweighausen, not far from where we live.  I took the picture in late September and it looks exactly the same today, flowers still blooming.
Our friend John heading to the fest hall﻿ 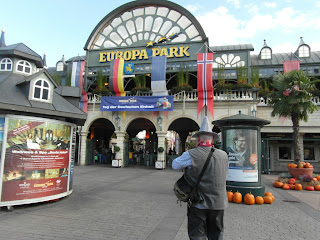 Of course, autumn means festivals, in particular October beer fests and wine fests. There are many, sometimes almost too many. We have been to three thus far, two of which I wrote about in my blog last fall. Friends from Canada joined us then as well as this year. We sang, clapped and swayed to the band from the Hofbrauhaus in Munich, where they play each year at Europa Park in Rust and to the band called "The Lustige Fünfziger" at the Linde in Wallburg.  ("The Happy Seniors," most of them older than 50 now--including a couple of members in their 80s.) 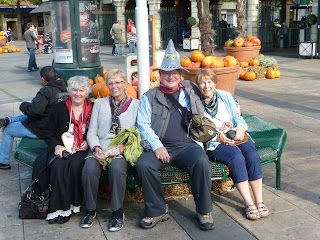 ﻿
John with a liter of beer at the Oktoberfest at the Linde in Wallburg, along with his Oktoberfest hat
﻿
﻿ 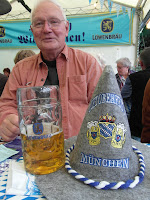 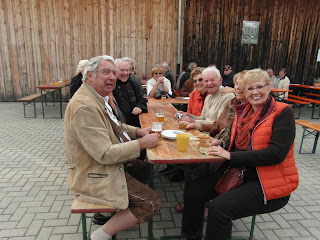 After we left the Linde, we all joined German friends at a small fest in Münchweier, our next village.

Hans in his Trachten is on the left and Leona, John's wife, is on the right.  Jean is partly hidden beside Leona.  Our German friend Adolf, who is 87, is beside them.

A couple of days later, Jean, Leona and I sat far above the vineyards of Durbach on a beautiful early afternoon and enjoyed Flammenkuchen (tarte flambe) and a glass of wine.  We sat on the terrace of a former Schloss and one renowned in the area for its wines.  Below, Jean and Leona as well as a view of the vineyards, hills and the town far below. 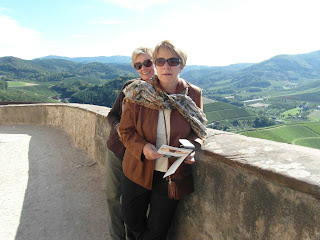 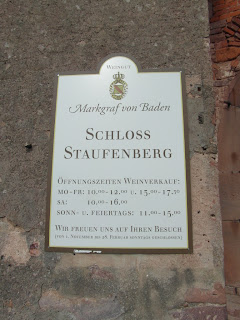 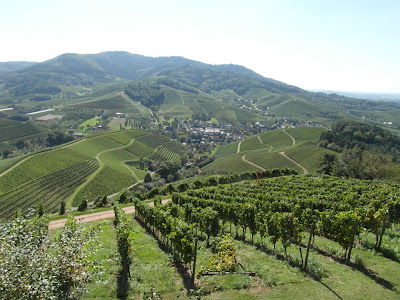 On that same day, the men--Hans and John--drove over to France and toured some of the WWI and WWII battle areas in Alsace.  Enroute, they stopped at a cheese maker's in the Vosges mountains to buy the farm's fresh Munster cheese made from unpasteurized milk (superior to using pasteurized milk).  Hans and I enjoyed ours a few nights ago for supper. 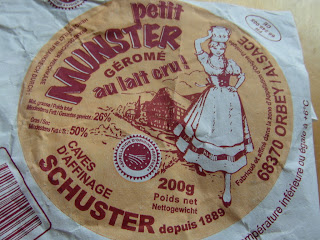 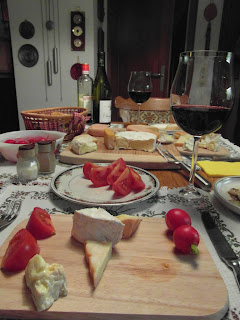 Below, a vineyard in Alsace.  Crosses are seen throughout Alsace and also in our area as well. 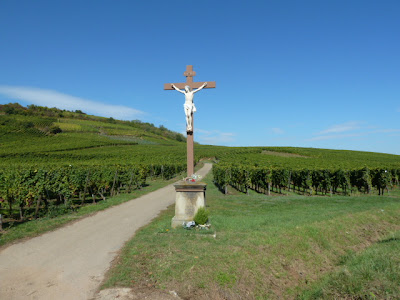 A war cemetery in Alsace 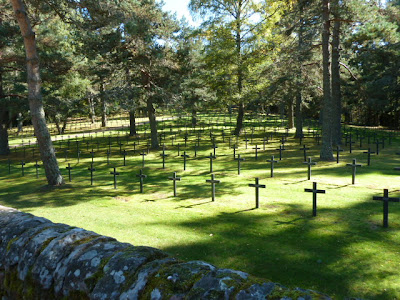 Gasthäuser add specialties on their menus from time to time throughout the year.  Spring and fall especially denote the changing seasons.  In spring, it is Bärlauch soup and many other Bärlauch specialties as I noted in one of my spring blogs.  Fall brings pumpkins and pumpkin soup.  The latter is offered everywhere, from the simple Gasthaus to the more expensive restaurant.  It is a fairly new trend, as a few years ago we never saw a pumpkin dish offered.  Today, pumpkins are ubiquitous.  Now one sees them sitting on doorsteps and ledges and in the stores and markets as in North America.

I have never seen canned pumpkin here although I haven't looked for it in a supermarket in Alsace.  All Germans I know who make pumpkin soup start by removing the flesh from a whole pumpkin.  A lot more work.  Something to think about, though, when carving out the pumpkins for Hallowe'en.   The pumpkins below were part of a display at the Super Store in Kingston, Nova Scotia in early September before I left. 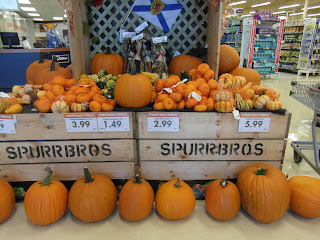 Hans recently had a bowl of pumpkin soup at the Linde in 'Wallburg, where I go nearly every week for chicken.  It was creamy and delicious.

Here is my friend Monika's daughter Petra's recipe for Kürbiscremesuppe:

Place first four ingredients in a good-size pot.  Add some water to just barely cover the vegetables; don't overwhelm them.  Add some soup bouillon or a cube.  Bring to a boil and simmer until soft.  Puree in a blender.  Add some salt and pepper to taste and sour cream or whipping cream, depending on which you prefer.  Monika prefers sweet cream as do I.

If wished, saute some diced bacon and then add diced onions to the bacon fat and saute until crispy. Add them to the soup bowls before serving. 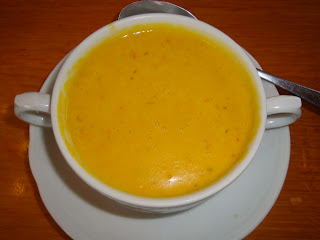 Here is a recipe from a German magazine for Kürbissuppe that is somewhat different.

Chop finely the pumpkin flesh, the onion, the ginger and the chili pepper.  Saute the onion, ginger and chili pepper in the butter.  Mince the garlic clove through a garlic press and add it to the pan.  Saute the chopped pumpkin briefly in the pan.  Add the broth.  Simmer 20 minutes or until the pumpkin is soft.  Blend it in a blender or mixer.  Add the cream, salt, pepper and nutmeg to taste.  Sprinkle with parsley.  Serve.

Note re pumpkin soup:  You can also use canned pumpkin for these recipes, but then you might have to adjust the amounts used of the other ingredients.

The grape harvest is almost completed and the barrels are filled with the wine that will be ready next spring.  We are fortunate to live in an area where breweries and wine cellars are abundant, with both wine festivals and October beer festivals celebrating the harvest. 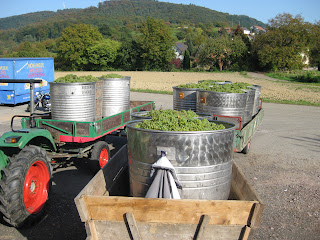 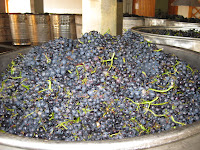 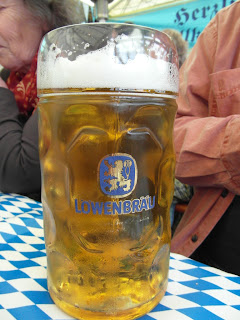 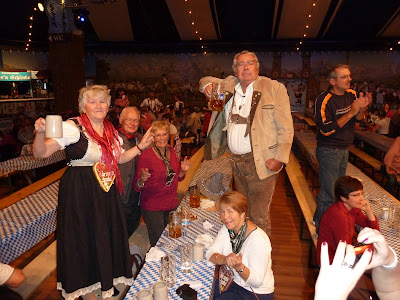 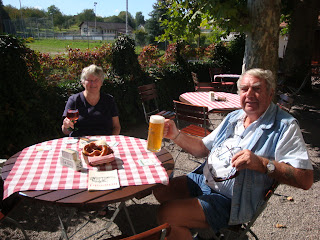