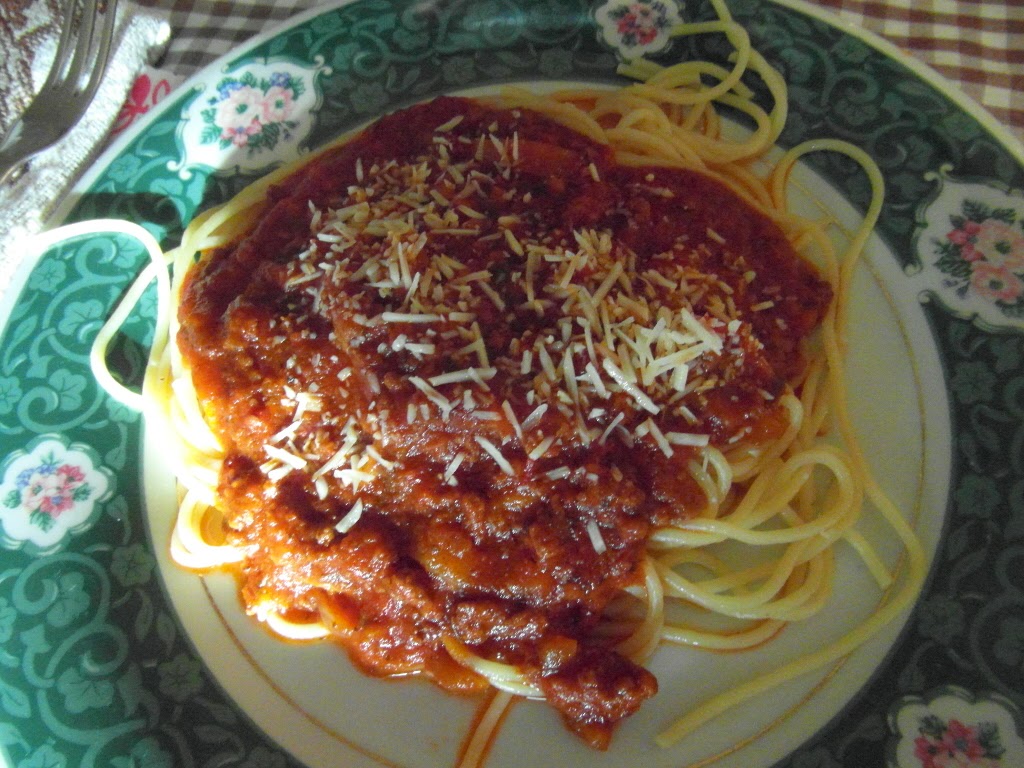 August began with a spaghetti dinner. This was really Hans' dinner, as he had made the sauce and had frozen it before he left for Germany.  As always, it was excellent.  Part of his secret is using lots of Italian seasoning and plenty of red wine.  Hans had made enough for almost two dinners.  My brother-in-law, Stephen, liked it so much he didn't want me to eat the remaining spaghetti but take it with us to Prince Edward Island where we all would meet a few days later.  And that is what I did.  I carried it in an ice box in the trunk of the car on a five-hour plus drive to the Island. 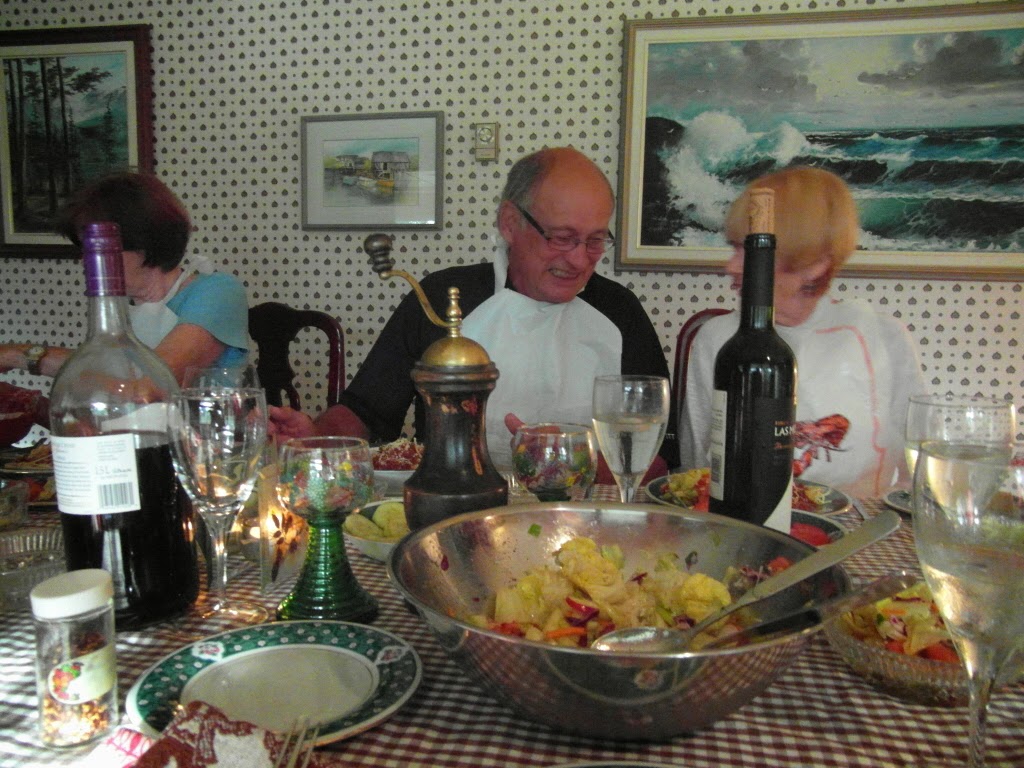 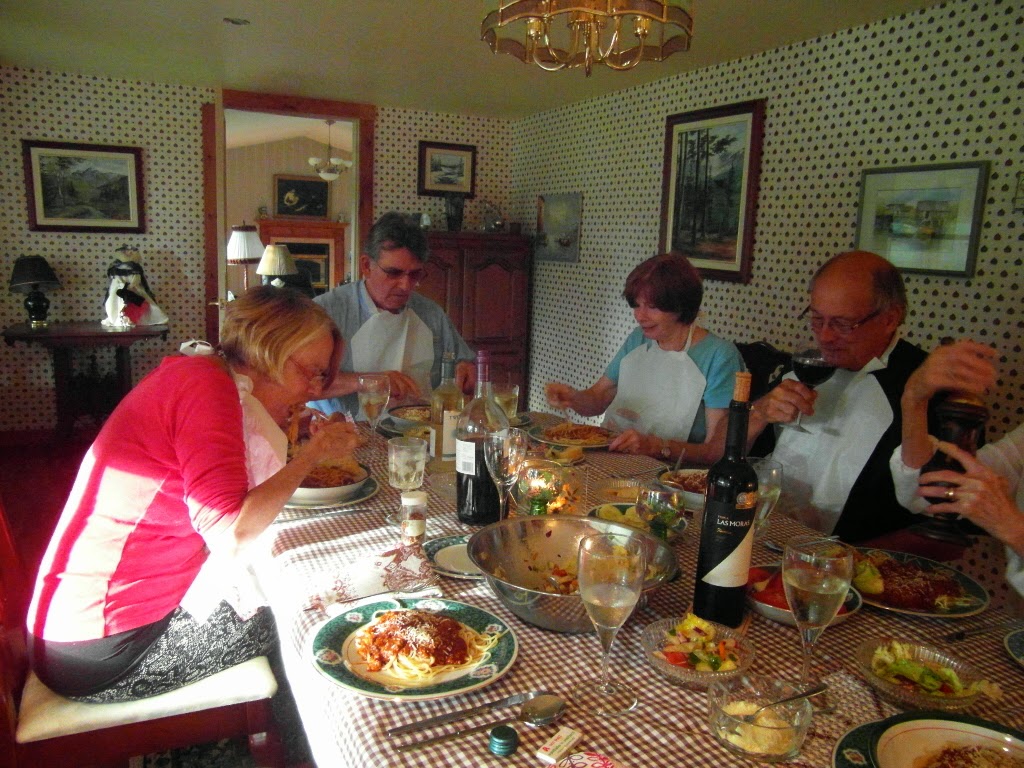 Along with the spaghetti that evening, I served a salad and French bread.  For me, that latter is essential. I spread each partially attached slice with garlic butter before heating it in the oven.  Spaghetti is not that easy to eat, so bibs were the order of the day. 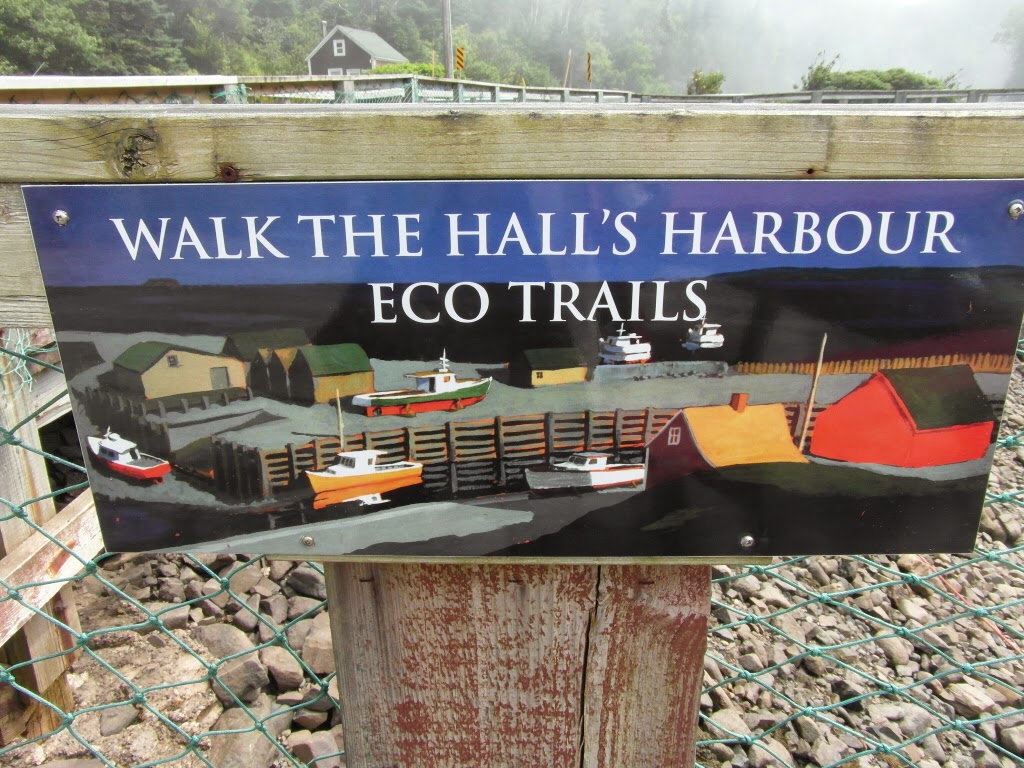 My sister Carol was visiting me from the U.S.A., so the following day she and I drove to Hall's Harbour, a delightful small village north of Kentville, directly on the Bay of Fundy.  That day the tide was out as usually seems to be the case whenever I visit it.  It was also foggy, as is sometimes the case.  The restaurant there is basic but has indoor and outdoor seating. 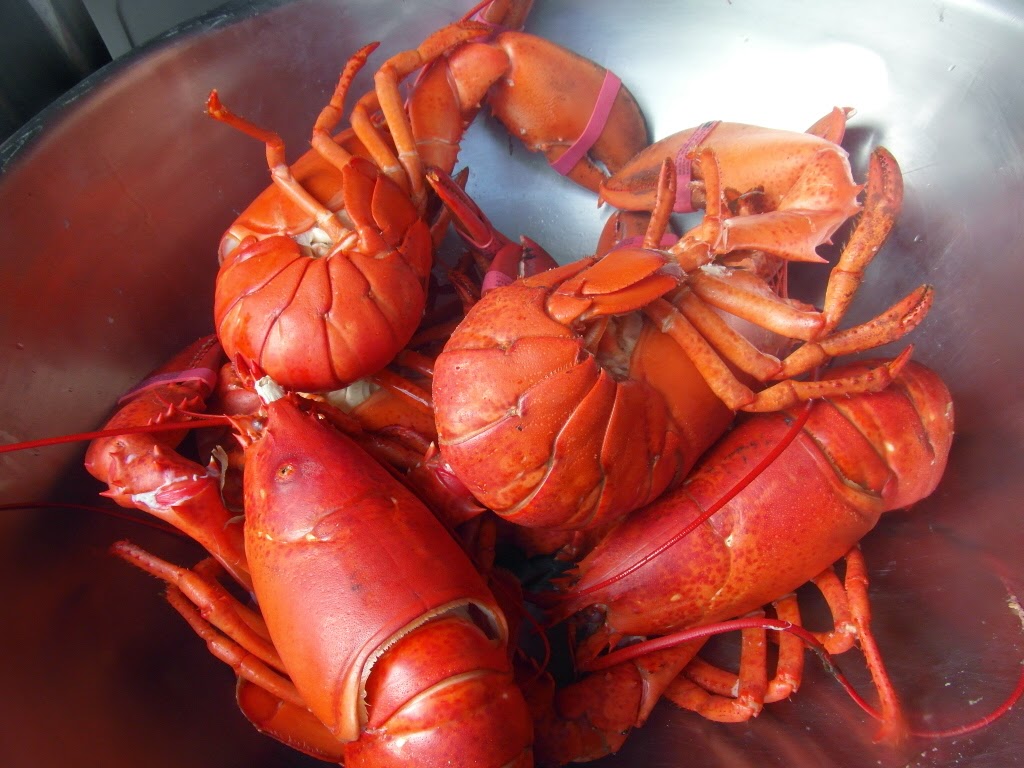 Fresh lobster is available: to eat there or to take home.  A small store is located beside the restaurant where one can buy souvenirs, including plastic lobster bibs, which we both bought.  Sometimes hard to find unless in a tourist area.  They are almost a necessity when eating your own whole lobster with juice running down from it as you break it apart.  They are also perfect to wear when eating spaghetti, which we did the night before, as I had a few that I had saved.

Below, boats moored on dry shore until the tide comes in; the restaurant with my sister Carol in the forefground; lobster traps below right 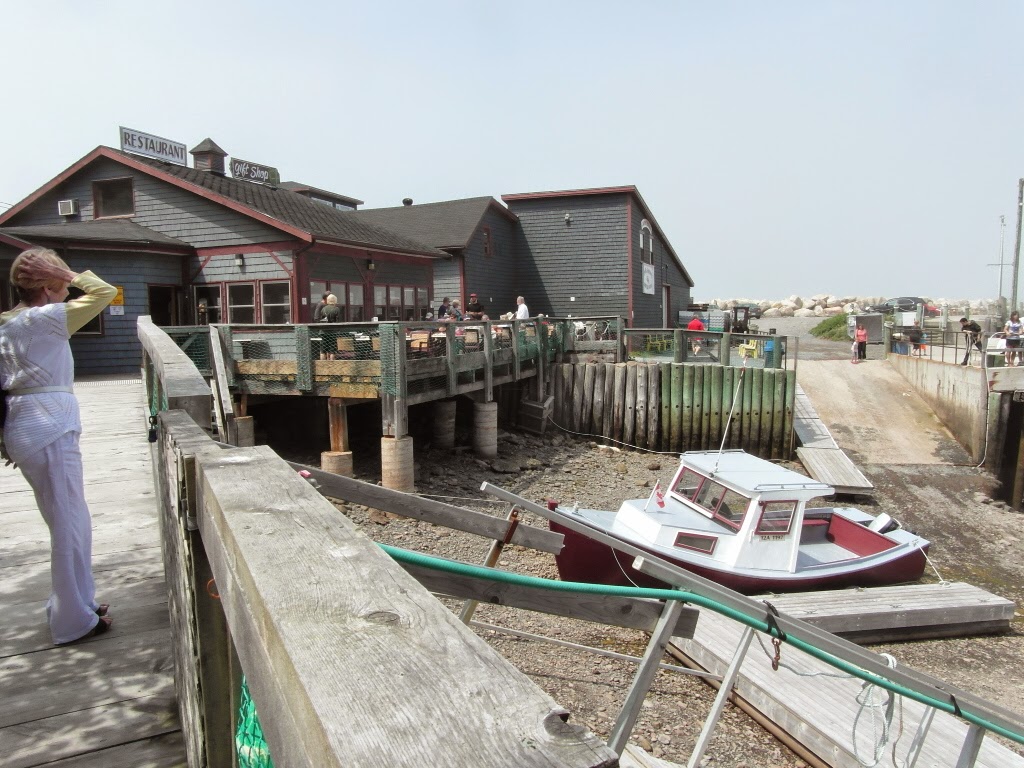 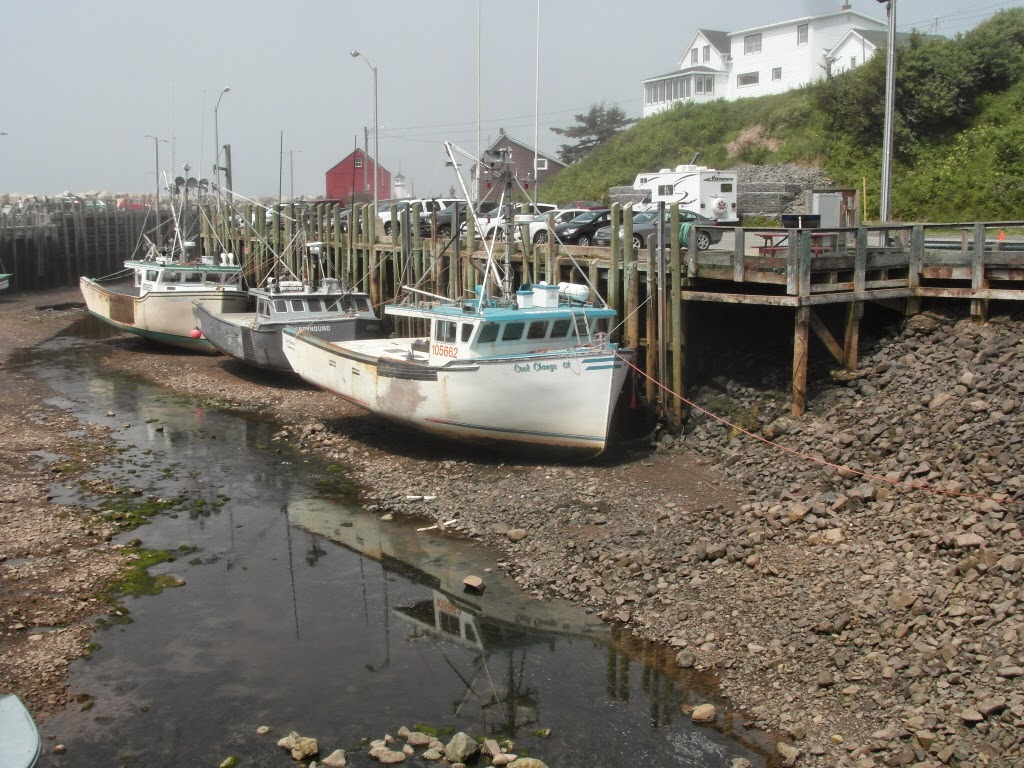 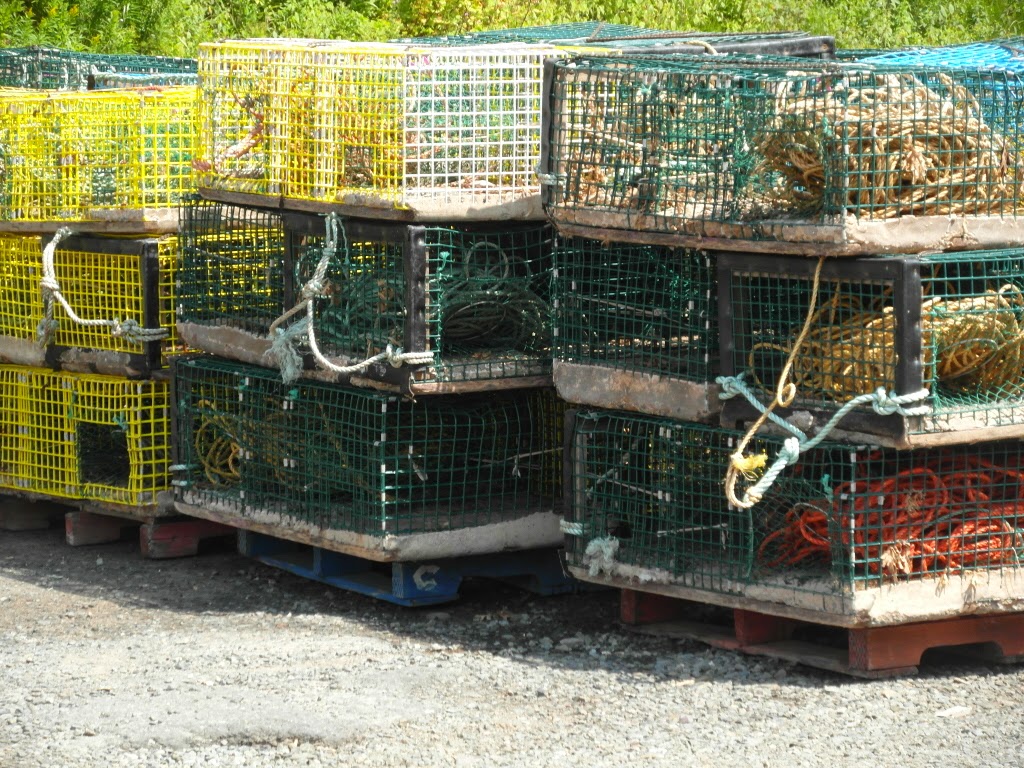 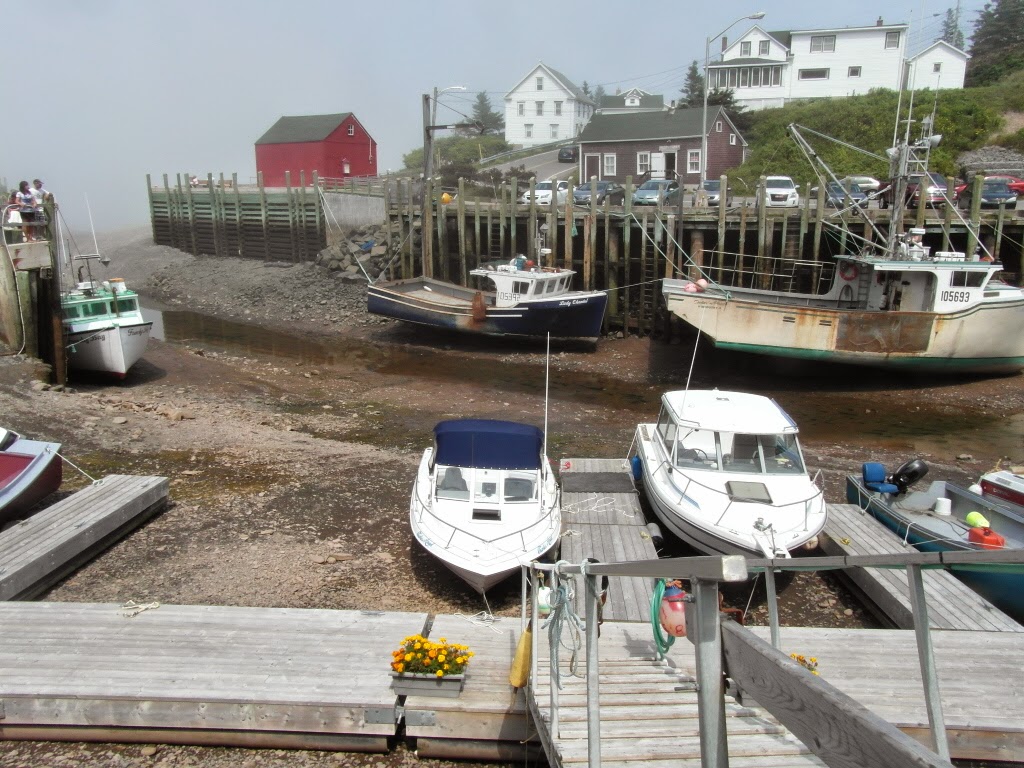 
﻿
﻿
The sun appearing, with guests enjoying their lunch. 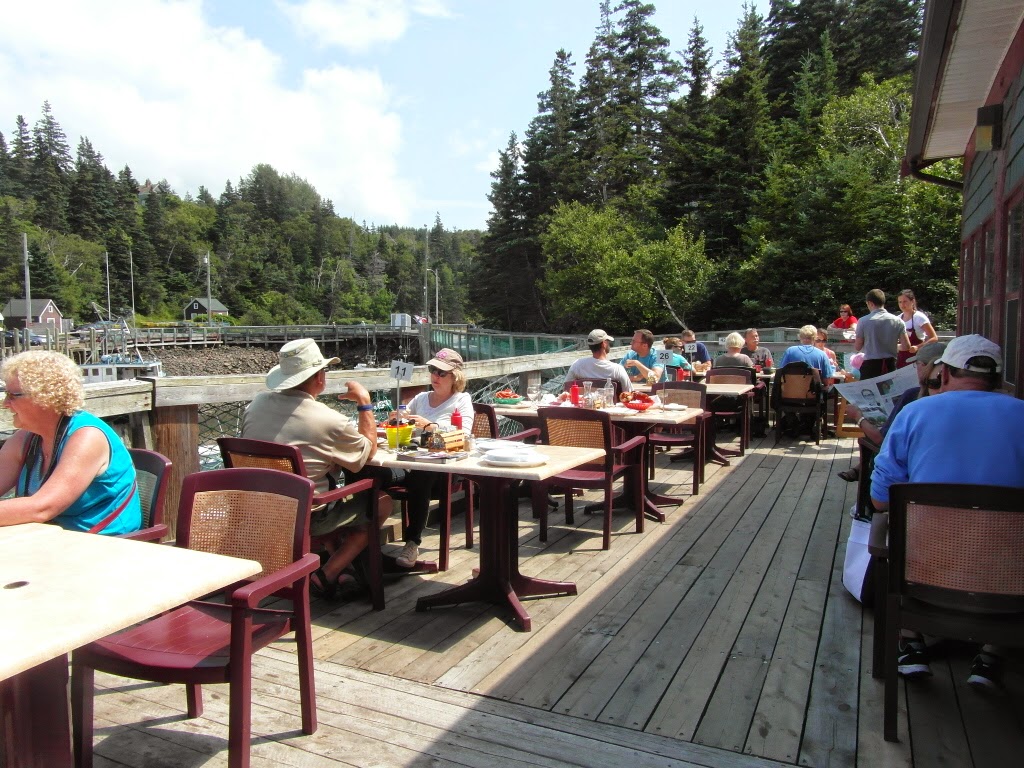 ﻿
Long-time friends from Germany visited me in mid August.  Sylvi and Hans live in our area of Baden-Württemberg.  They were on a trip to both the United States and Canada.  This was their first time to Nova Scotia.  We laughed, ate, enjoyed some wine and beer and also fitted in some sightseeing during the two days they were with me. That included driving up the North Mountain to Hampton on the Bay of Fundy. 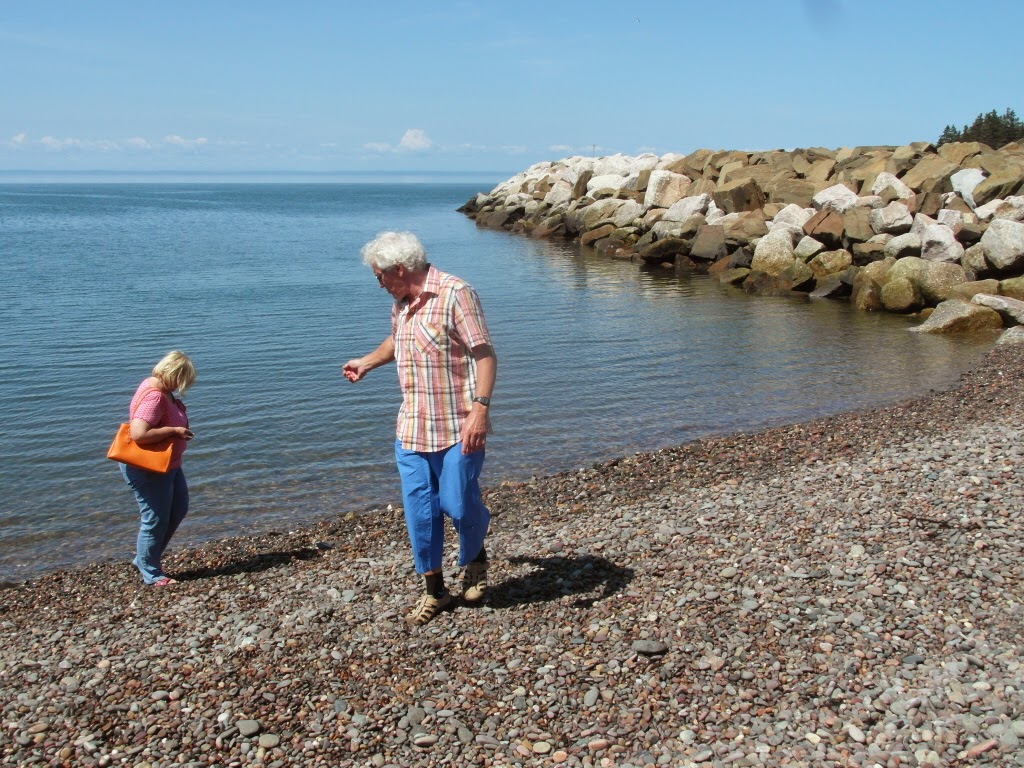 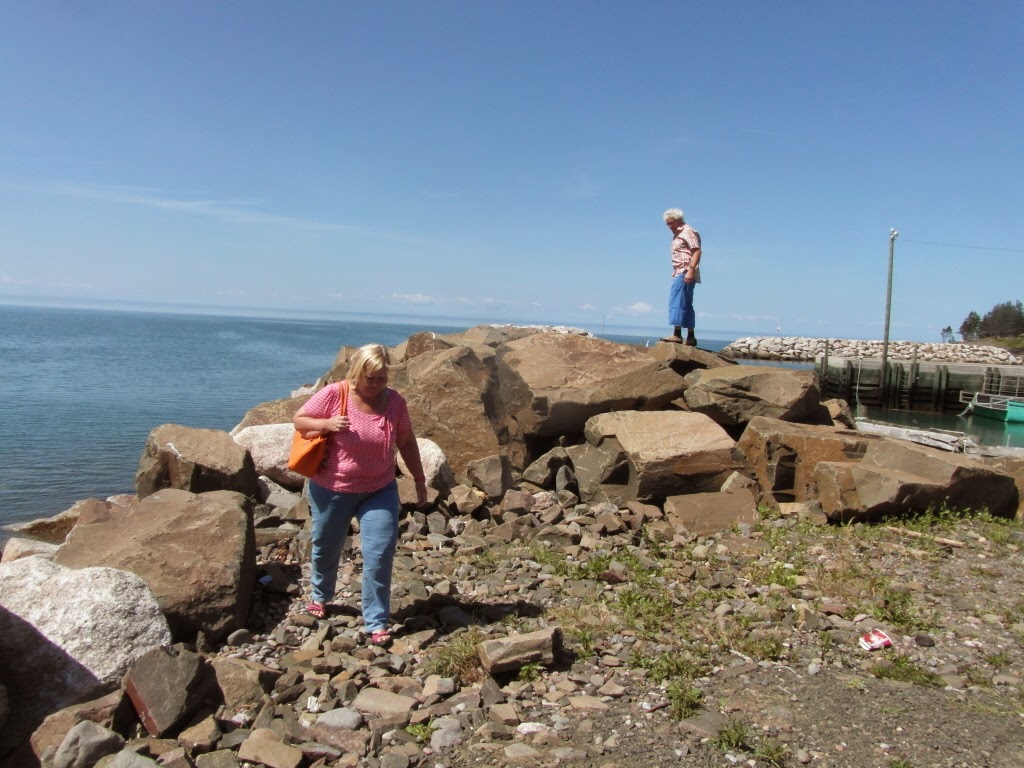 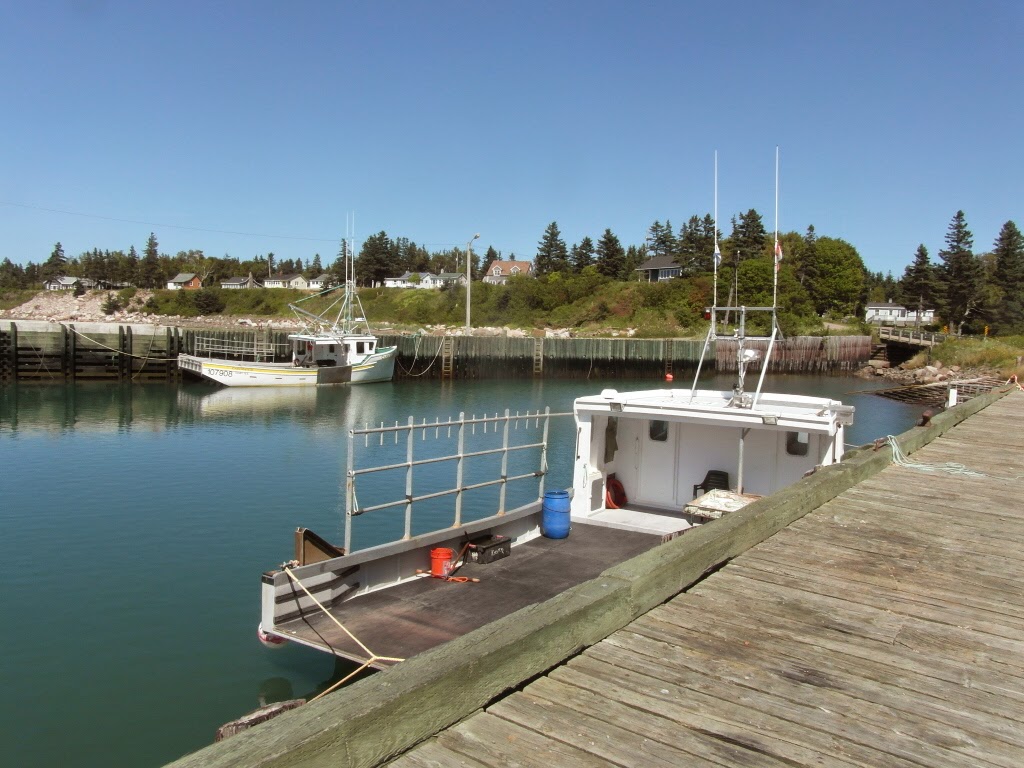 The Bay of Fundy stretches for about 270 kilometers between the provinces of New Brunswick and Nova Scotia, two of the Canadian provinces bordering the Atlantic Ocean.  It has the highest tides in the world, with 160 billion tonnes of sea water flowing in and out of the Bay each day.  That water is very cold so one wouldn't last long if falling into it from a boat.  Many fishermen have lost their lives during fierce storms in the Bay of Fundy.   But, a positive note:  because of the cold water, some of the best scallops and lobster in the world comes from it.  As well, some beautiful stones can be found along the rocky shore if one wishes to look for them.

From Hampton we headed along that coastline for a time before driving back down the mountain and into Annapolis Royal, Canada's oldest town.  It dates back to 1605. I have written several times on my blog about this lovely town . 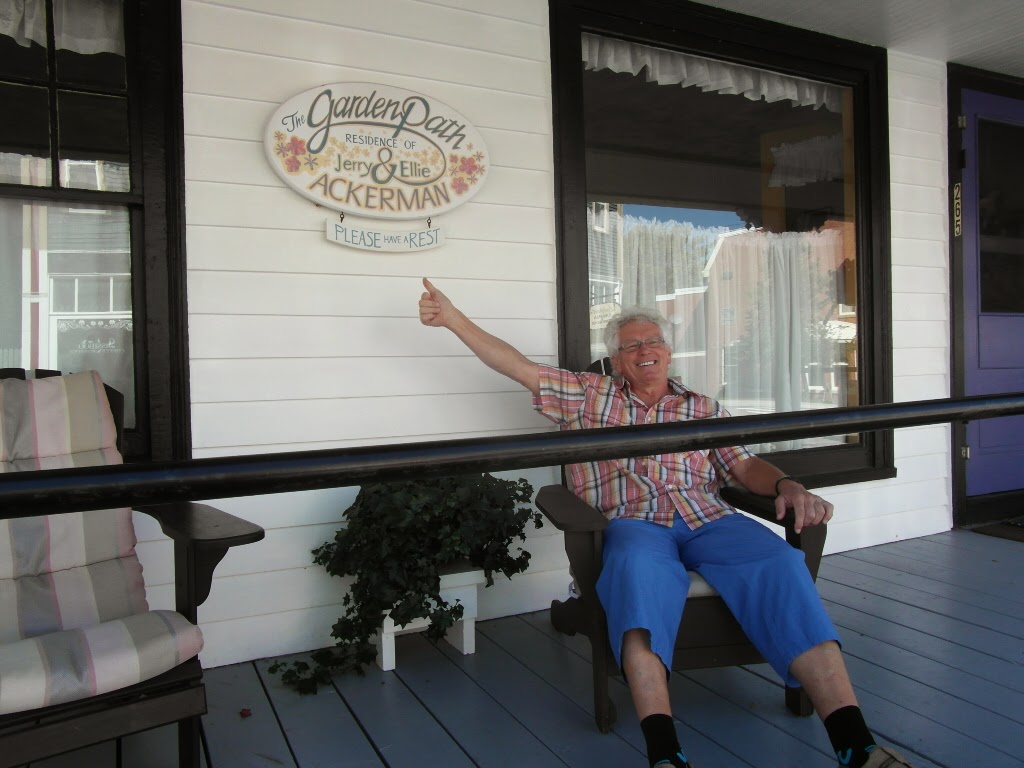 ﻿
﻿
Above, Hans Schlager in Annapolis Royal.  This is a private home on the main street offering a place to rest.  He took advantage of that offer.

The house on the left is one of the oldest in town. 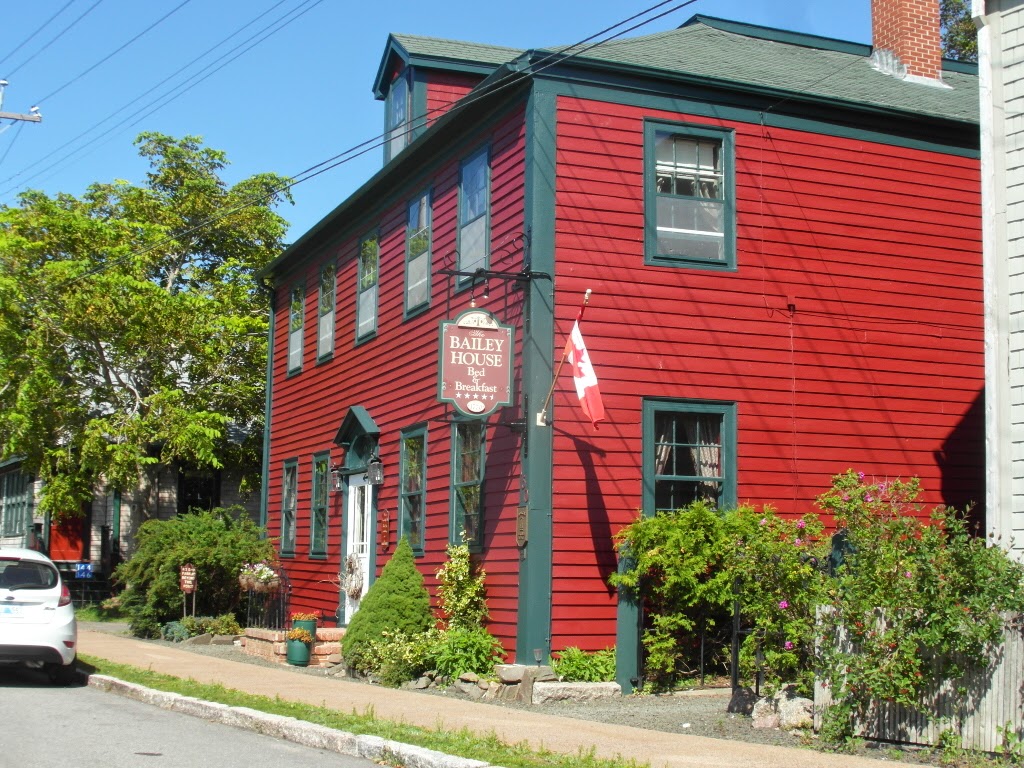 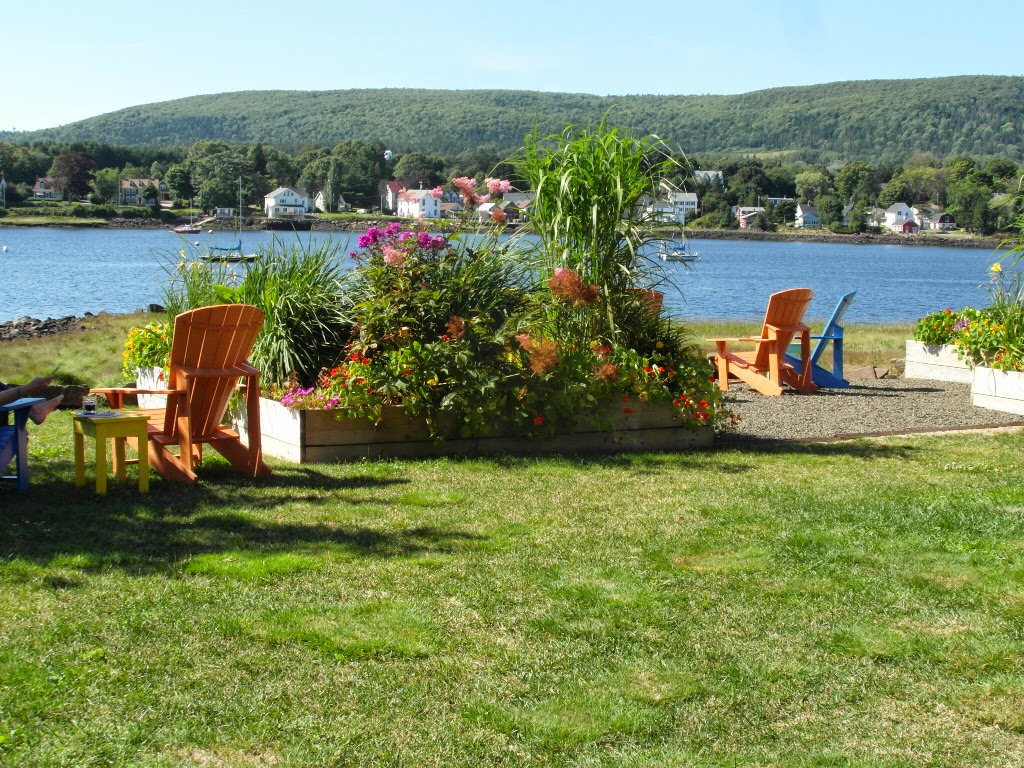 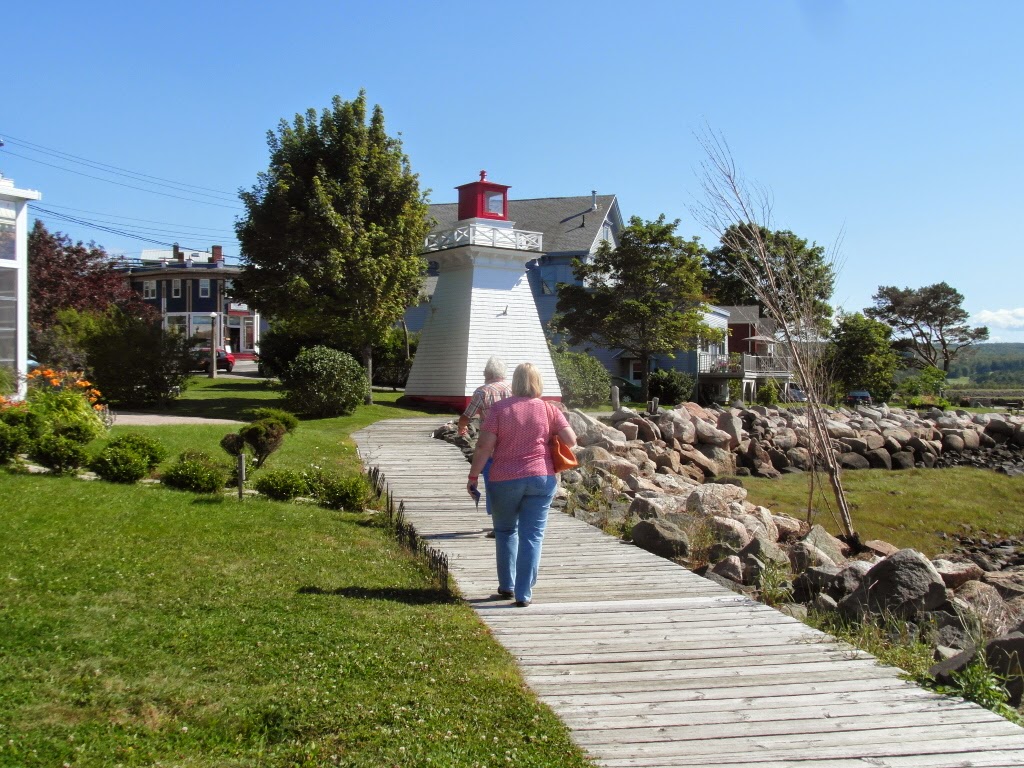 We arrived home at about 5:30 to 6 p.m.  I rushed around preparing supper.  My sister Paula and my brother-in-law Laurie would be joining us as would my sister Carol who had driven to Chester on the south coast for the day. 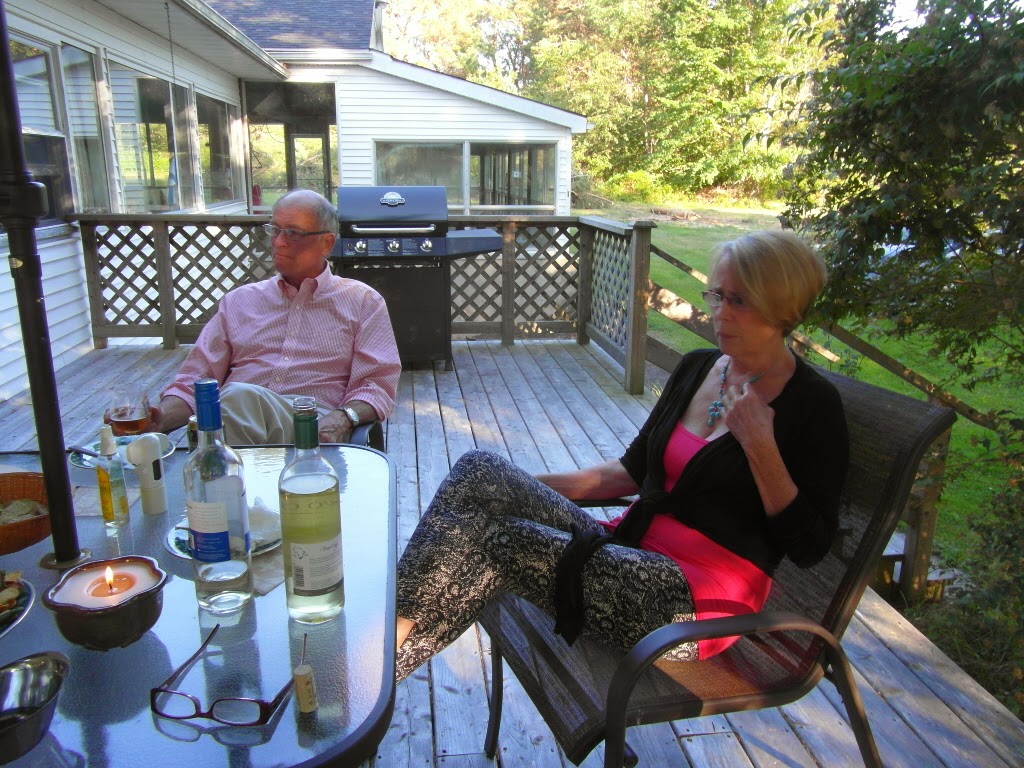 First would be appetizers and drinks on the deck.  All was great fun with lots of laughter.  I had placed dinner in the oven to bake:  pork chops in a sweet and sour sauce and potatoes.  A simple meal, with carrots on the stove top ready to go plus salad.  We were having such a good time with lots of talking going on that I forgot to check the oven in time.  I opened the oven door and smoke billowed out.  My chops were black, the potatoes like golf balls and the kitchen filled with smoke.  So now, what to do?  I was tired and there went our dinner! ﻿
﻿
﻿
﻿
﻿
﻿
﻿
﻿ 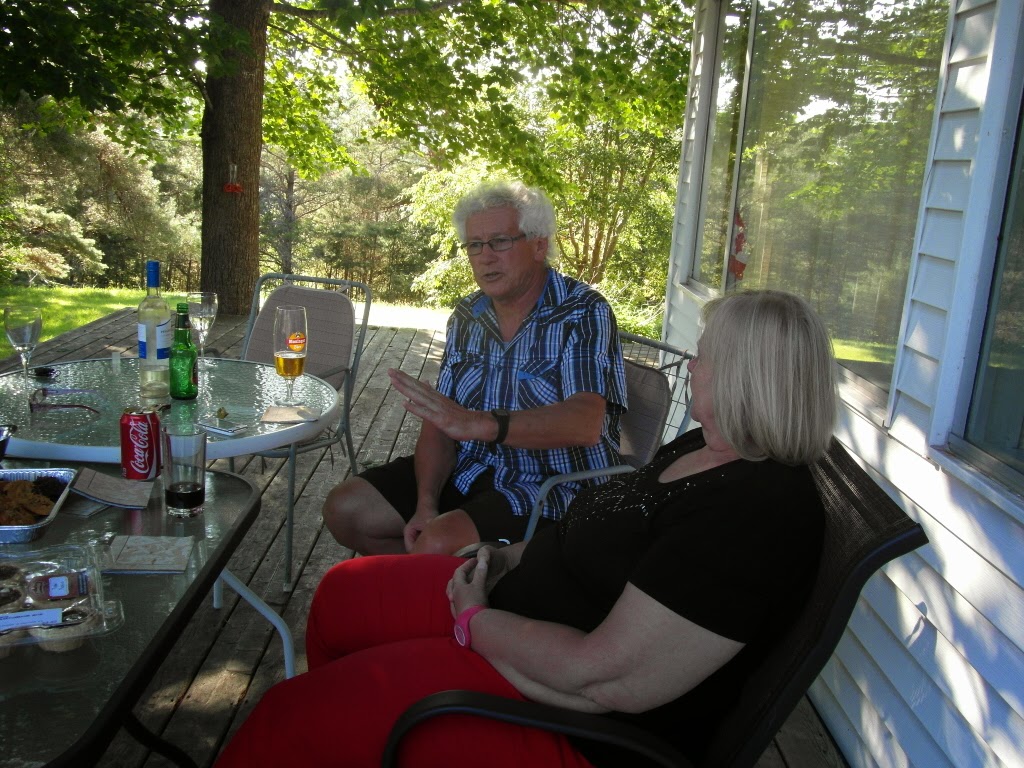 On the left below, my sisters Paula and Carol (in white) and Hans 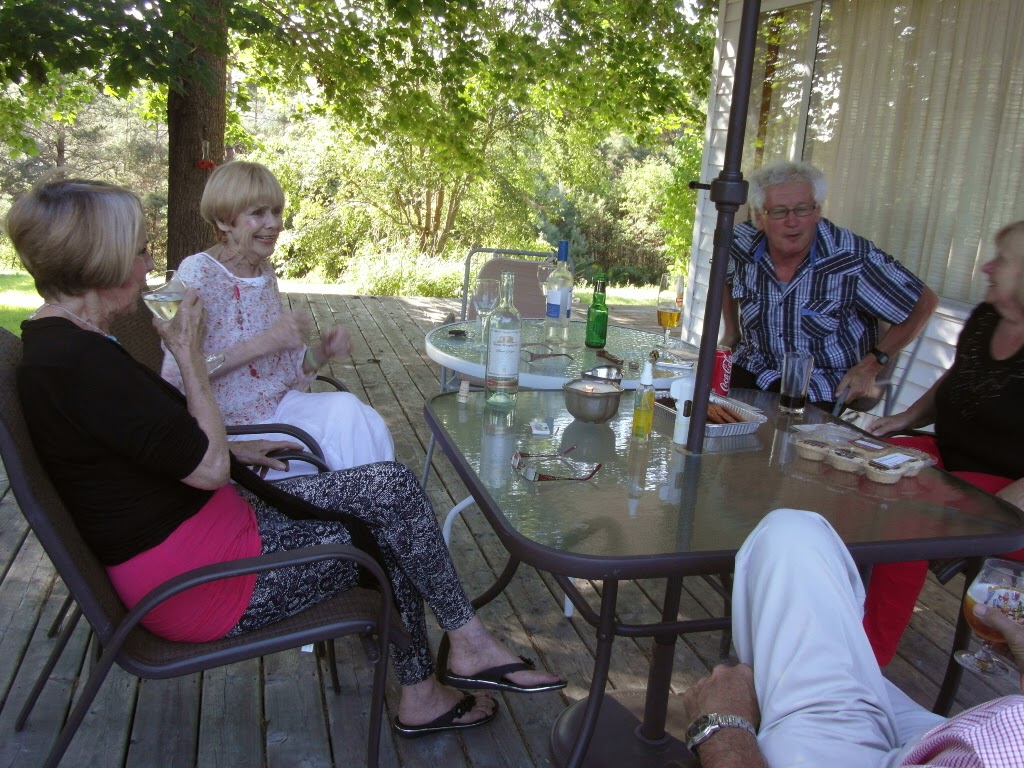 I had a day earlier thought of going to the pub but decided to cook instead.  A mistake!  Hans then said, "The pub it is!" so off we went to town.  It was now after 8 p.m.
A couple coming out of the pub told us that the chef had finished cooking for the day.  I went inside anyway to check and talked to Sheena, the owner's daughter, whom I know.  Sure enough, no more food.  She suggested we go to "Mama's Pizza" down the street.  So off we all went, along with the other couple, who happened to be visiting Bridgetown from Comox, B.C. and who also hadn't eaten. We did get pizzas and brought them home to eat (no tables at the pizza place).   They were good and so was the wine!
As my sister Carol said, "Look at it this way, Janet, you have no dishes to wash!"  True, I just had to clean the casserole dish that had pork chops glued to it!  We all had a good laugh and with the wine helping to soften the disaster, the evening turned out to be an enjoyable one.
﻿
﻿ 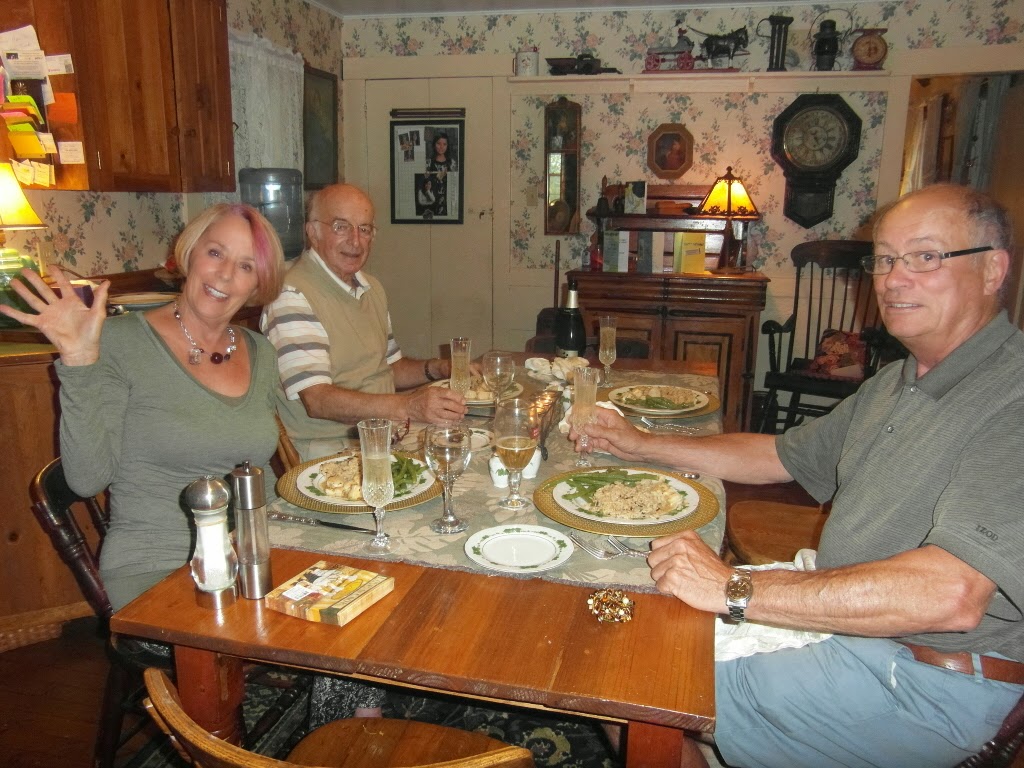 ﻿ A chocolate cake with candle glowing and the big 78 on top followed. 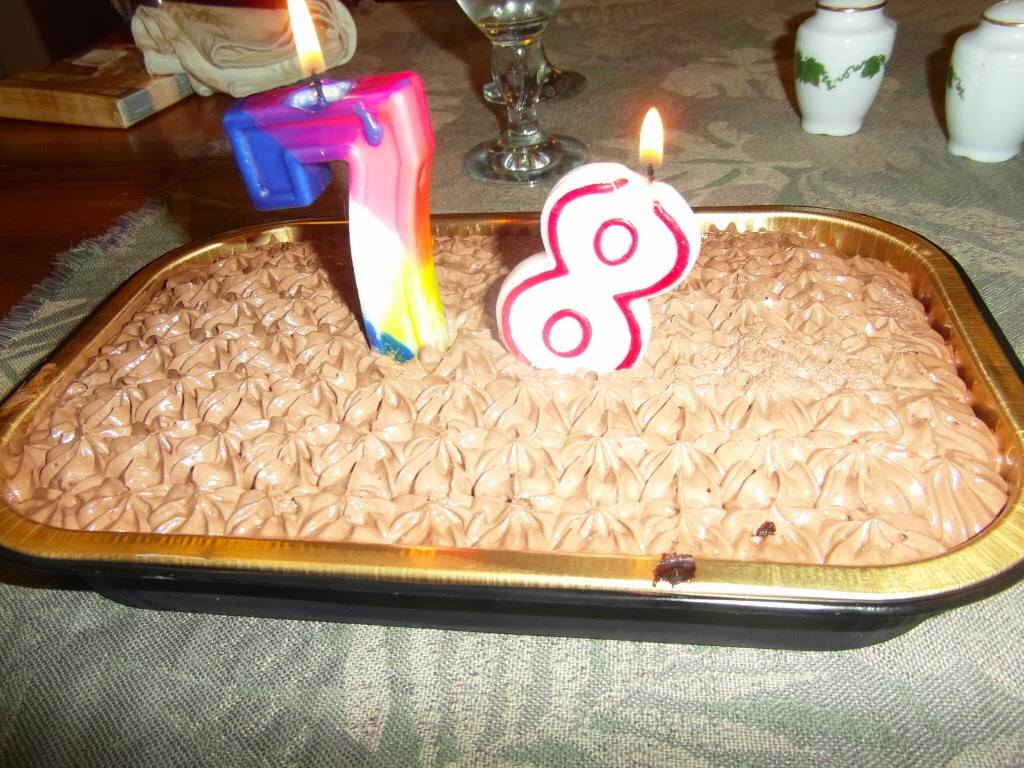 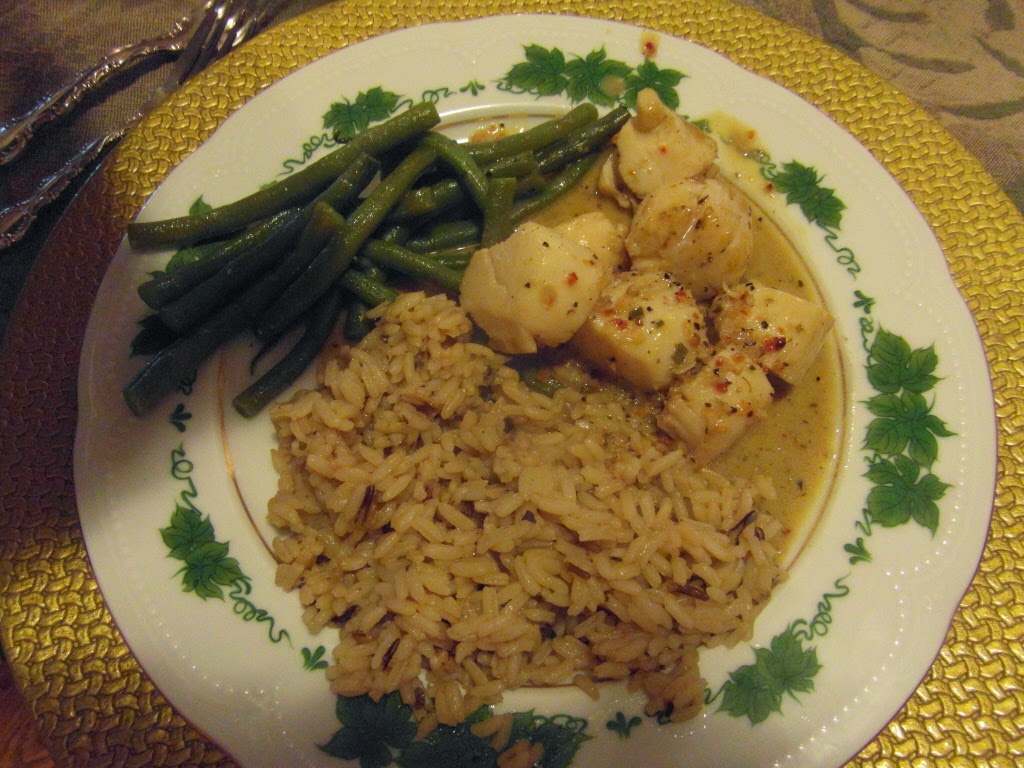 Paula's Scallops:  Here is how Paula cooked her scallops:  Saute the scallops quickly in butter and oil in a fry pan along with some minced garlic; when browned, remove from pan.  Deglaze the pan drippings with white wine; add a packet of chicken oxo.  Stir well.  Add whipping cream and Montreal Steak spice without the salt.  Check for seasoning.  Put scallops back into the pan for a second or two.  Serve with rice and the sauce. 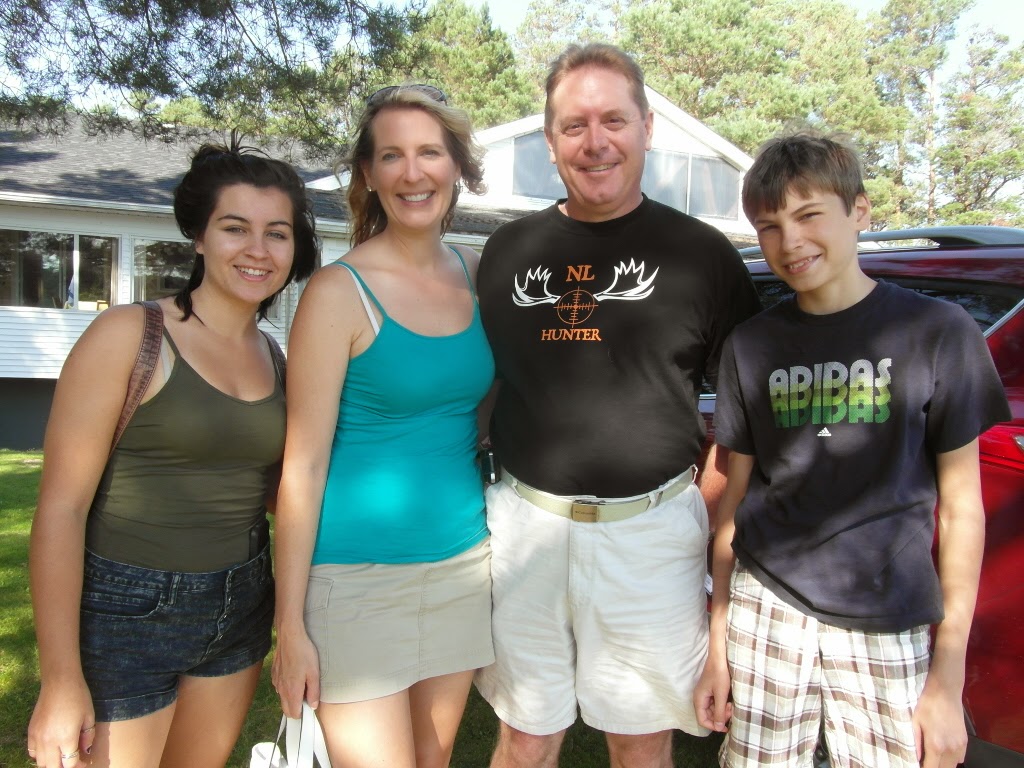 At the end of August friends arrived for lunch with their two teens.  Dave and Karen live in Newfoundland but visit Dartmouth, N.S. every summer to visit Dave's parents, Liz and Niel, whom I have known for many years.  I served a simple lunch after which all four enjoyed a swim in the pool.
A day later my friend Mary arrived from Ontario to spend a week with me.  She was my last visitor before I headed back to Germany five days later.  I shall talk about that visit plus a special celebration in my next blog.  The summer is gone but we can all remember the sunny, warm days.
Mary enjoying one of those summer days. 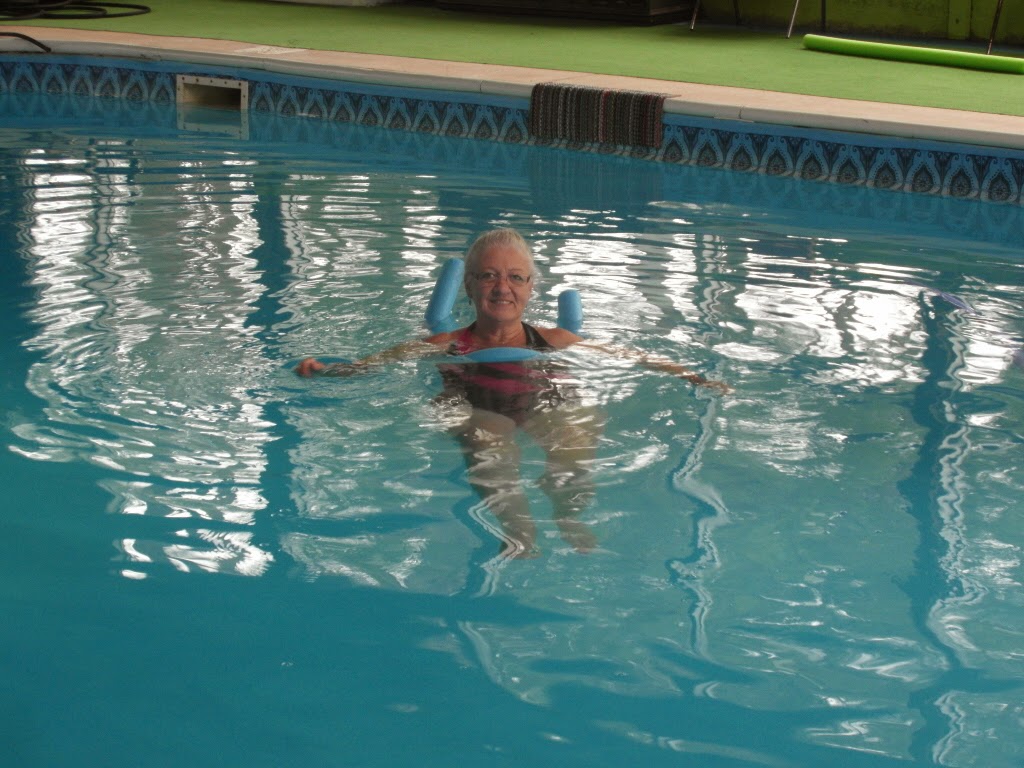 Posted by Janet MacDonald at 2:41 AM