The Waning Days of Summer 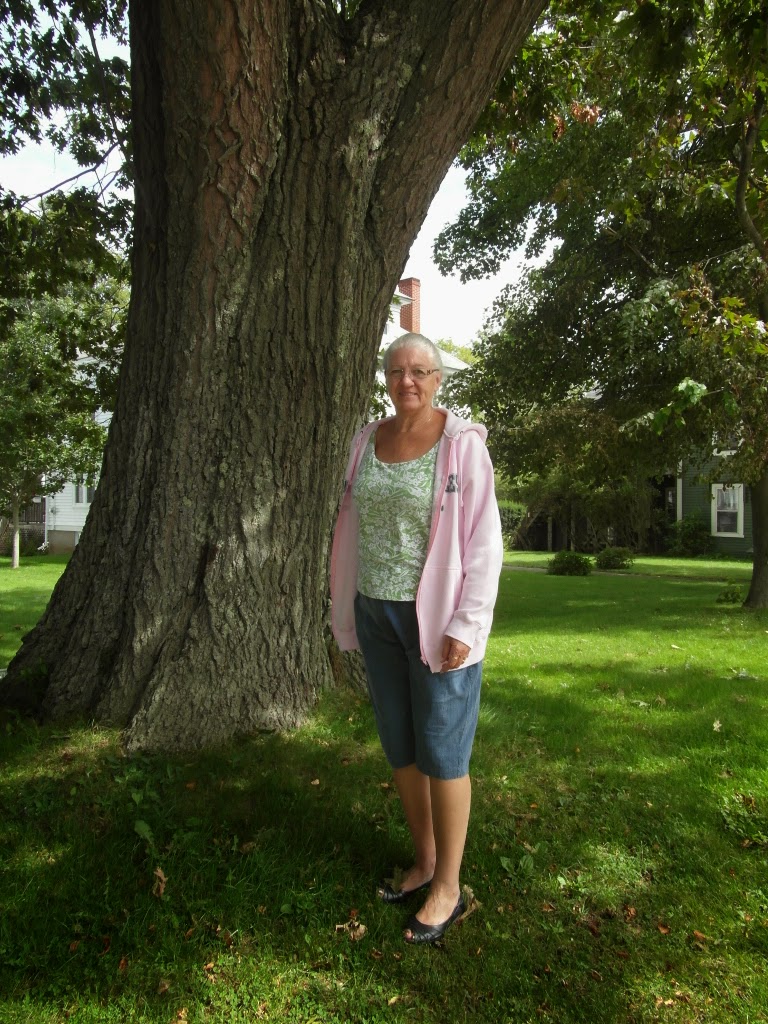 My last visitor in Nova Scotia this past summer was my friend Mary who lives in Ontario.  We first met in the mid 1970s in Lahr when both our husbands were posted to Germany.  Three years later we were all posted to Winnipeg, Manitoba, thus we have been friends a long time.

This picture of Mary was taken in Annapolis Royal where we spent some time meandering along the street and checking out the shops along the way.


The souvenier store, the Crooked Floor and the Fort Anne Cafe 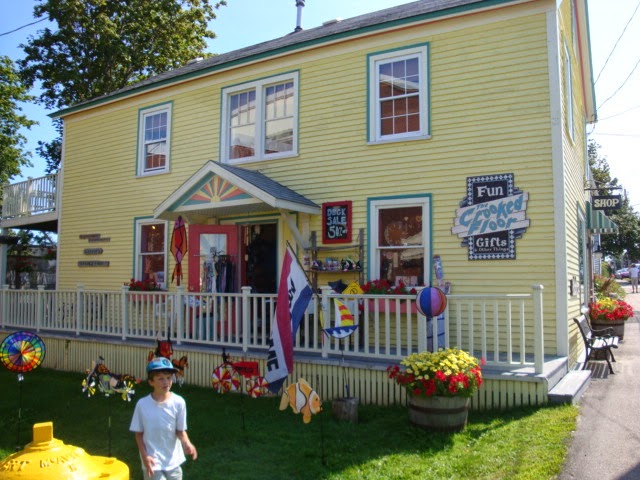 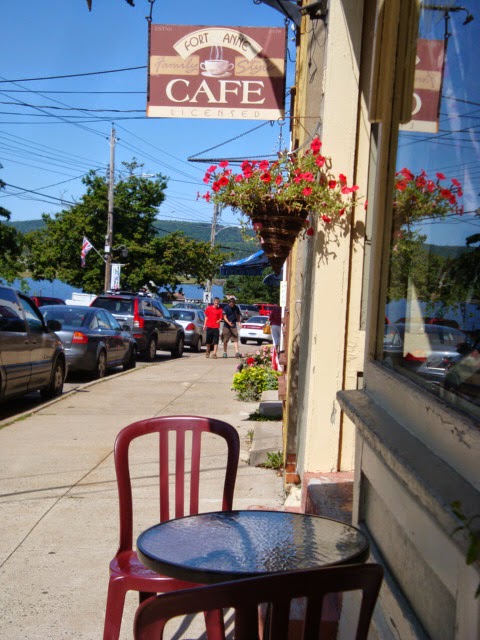 The boardwalk in town along the Annapolis Basin 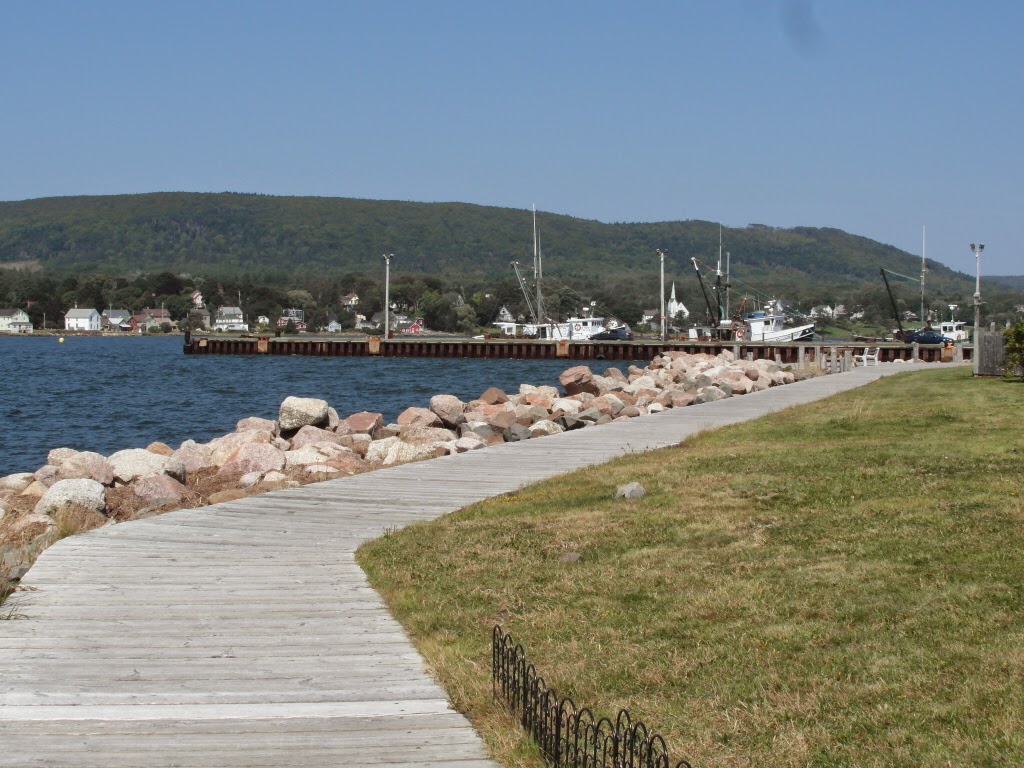 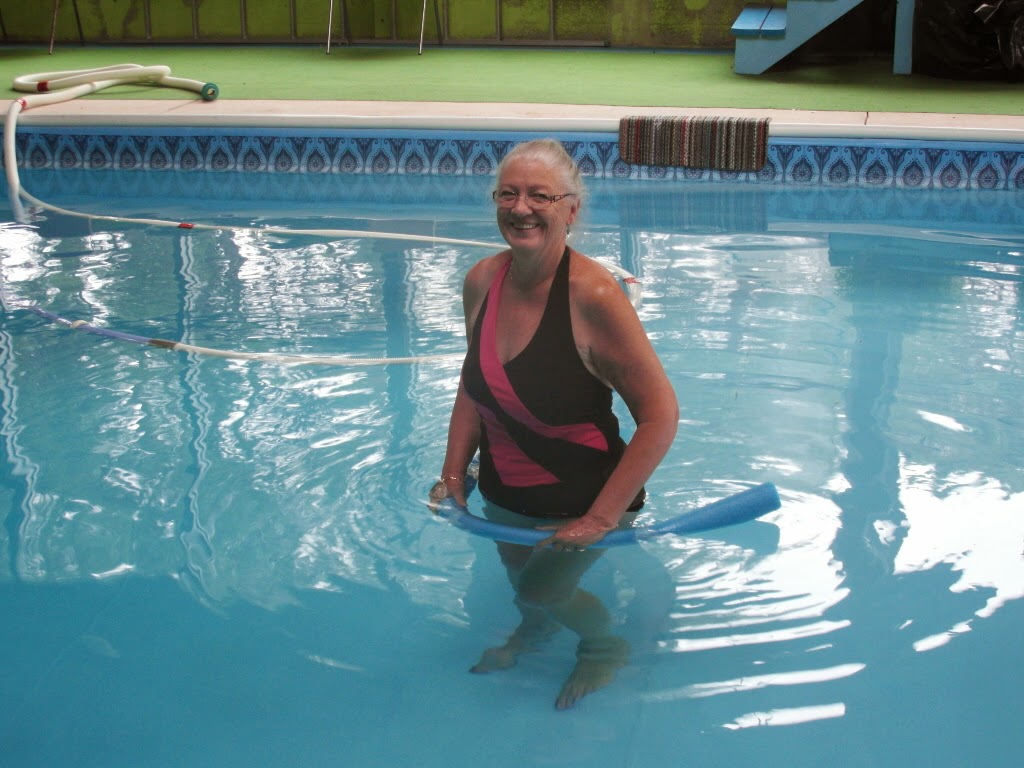 Mary and I swam, ate, drank some wine and beer and did a lot of talking.

﻿
﻿
On one of the evenings for supper we had Buletten, a German specialty.  (I wrote about them at length in my blog post "All About Buletten" on March 19, 2011.)  Paula and Laurie joined us as did our friend, John.  Hans had made them before leaving for Germany and had them in the freezer for me all ready to thaw and heat up.  He had also frozen his cooked red cabbage, which is traditional with the Buletten as is the cucumber salad, especially in Berlin and eastern Germany.  (I made the cucumber salad although it is Hans' recipe.) 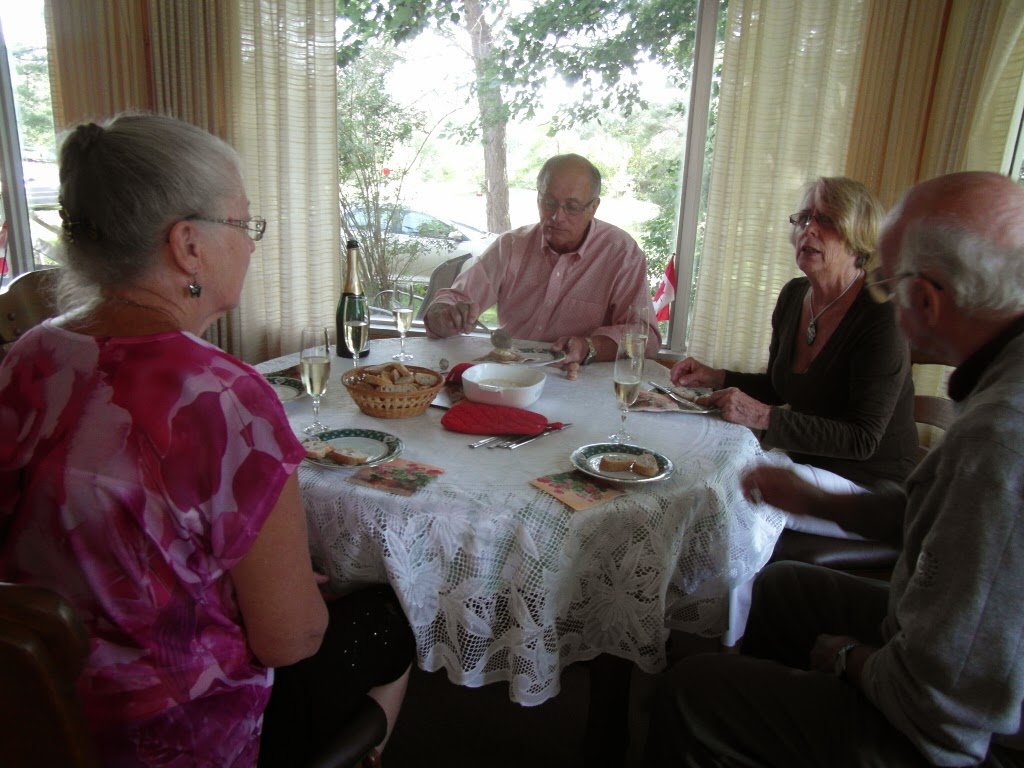 We began the evening in our front porch at the round table with Sekt/sparkling wine and melted Camembert, accompanied by slices of French bread.  The cheese is sliced in half and filled with a mixture of garlic, lemon juice and lemon zest.  (The recipe can be found on my post of Nov 25, 2013, "A Wedding Celebration.")  I have served this many times as it is not only easy and fast to prepare but everyone loves it.  I always serve cranberry sauce with the cheese but forgot that evening.  (In Germany, I serve my own cranberry sauce with Grand Marnier as one of the ingredients.)
Note:  I had already published this on line when I realized that it is not cranberry sauce that I usually serve with the Camembert, although that is very good with it, it is hot pepper jelly that I generally serve as it is a great contrast to the mild Camembert. 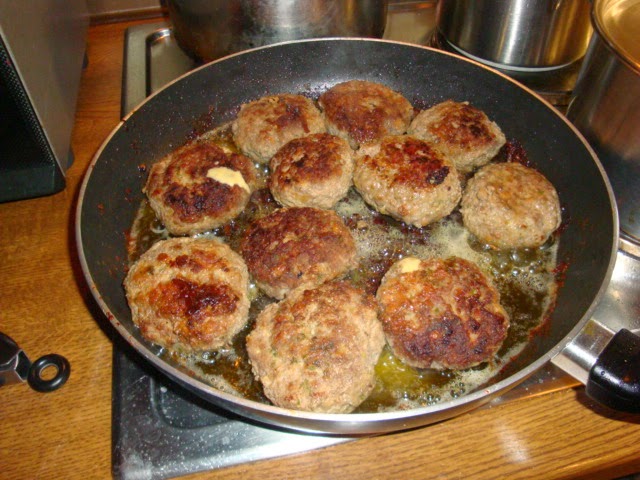 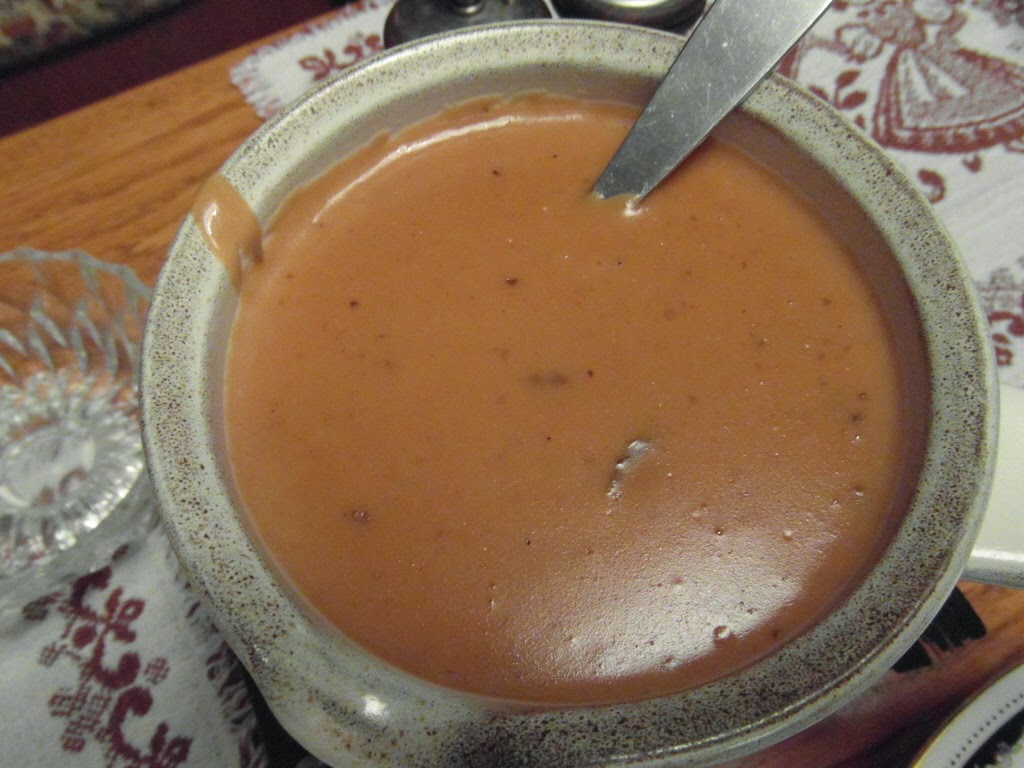 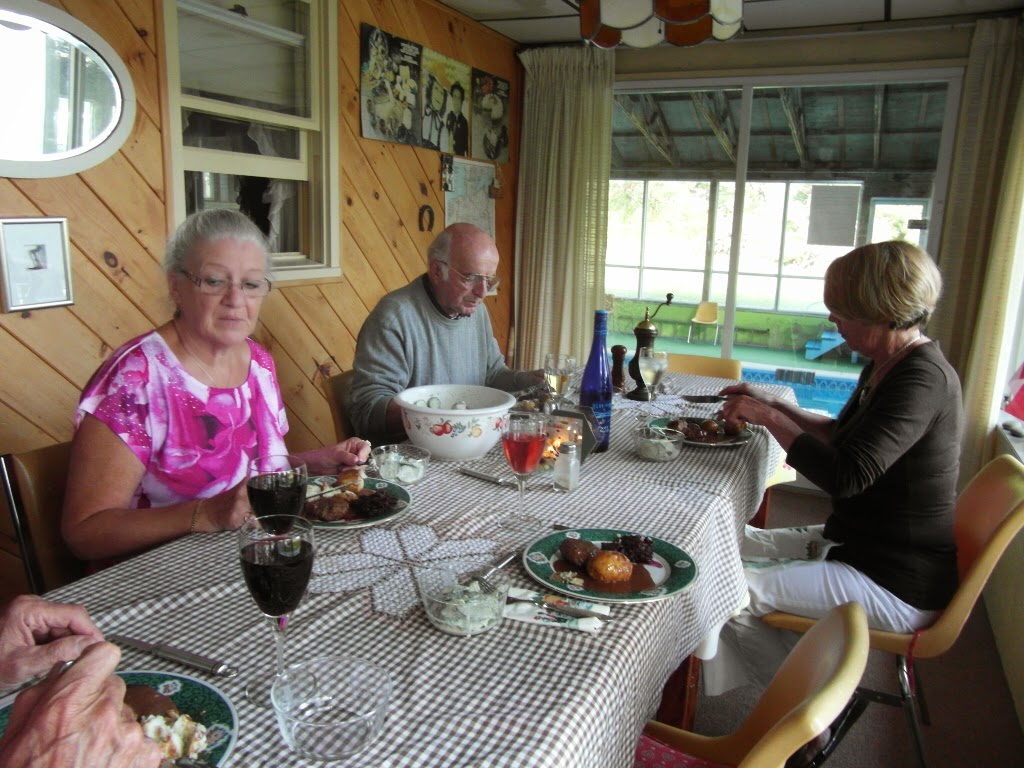 So once again, the meal was really Hans' dinner; he just wasn't there to enjoy it.  On this evening, I kept it casual, so everyone helped themselves at the stove and carried it out to the table at the other end of the porch, near the kitchen. 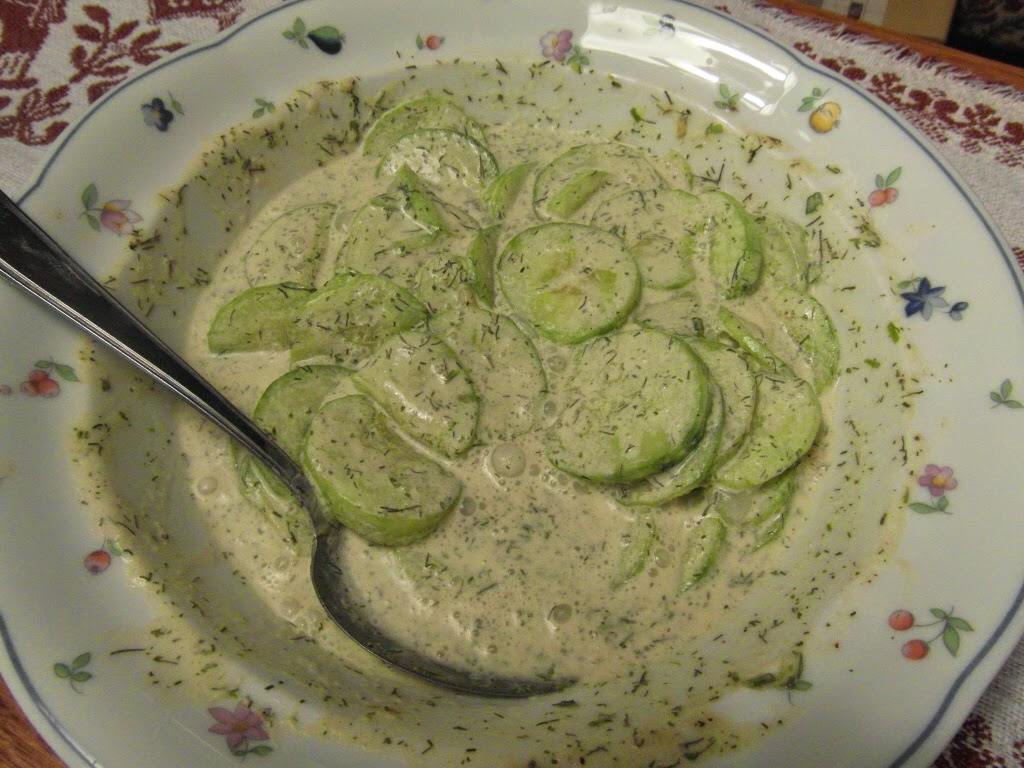 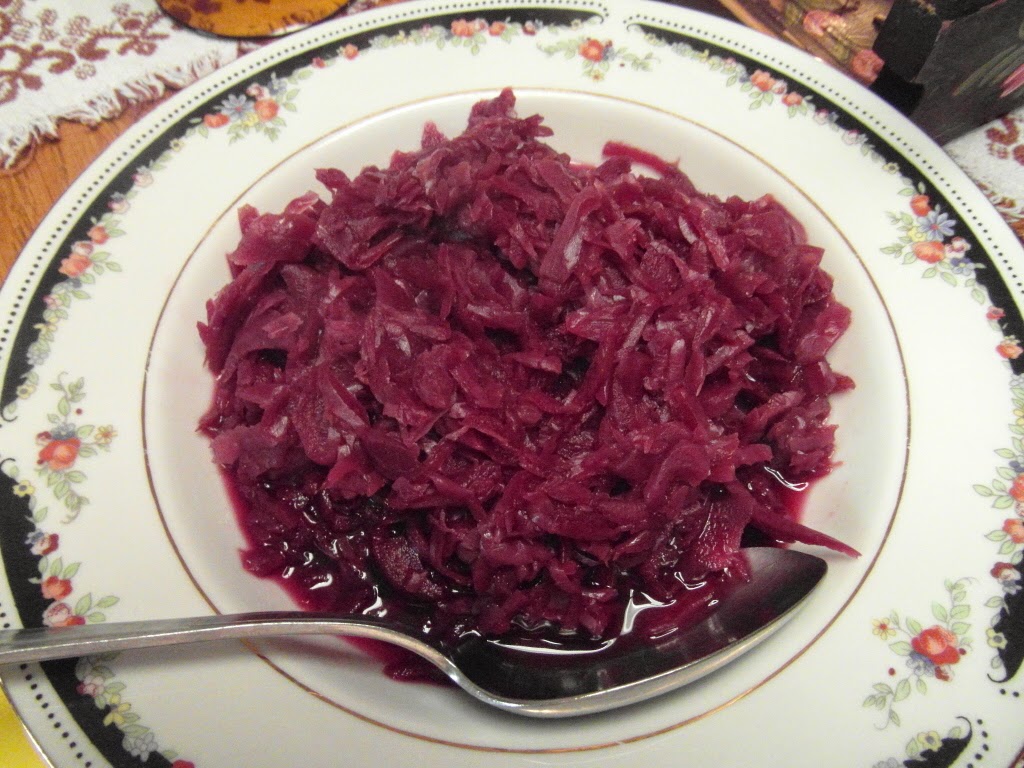 ﻿
﻿
A couple of days later I once again made those sweet and sour pork chops that I talked about in my recent blog post and which were so black we couldn't eat them that particular night.   This time, I did not forget them in the oven.  Paula and Laurie joined Mary and I and, thankfully, they were a success. 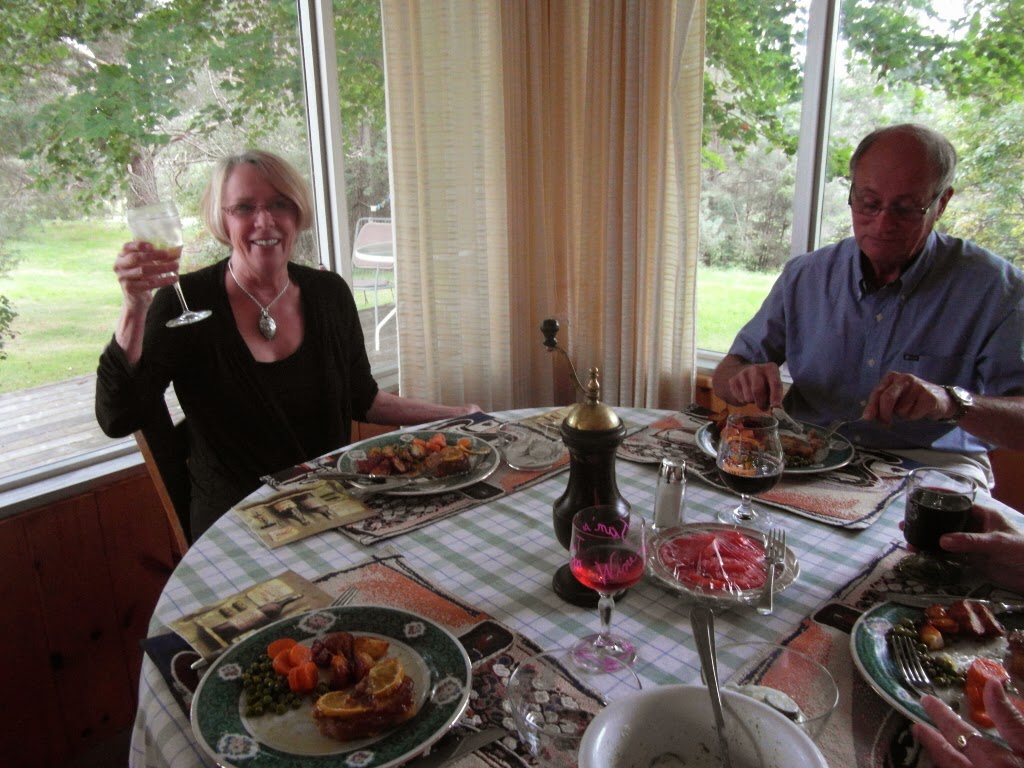 I served the chops with oven baked potatoes, cleaning them but leaving the skins on and cutting them into chunks.  I then rolled them in some oil and butter and sprinkled them well with minced garlic, salt, pepper, rosemary and some thyme.  If making them that way, turn them over occasionally so they do not burn and will cook evenly. 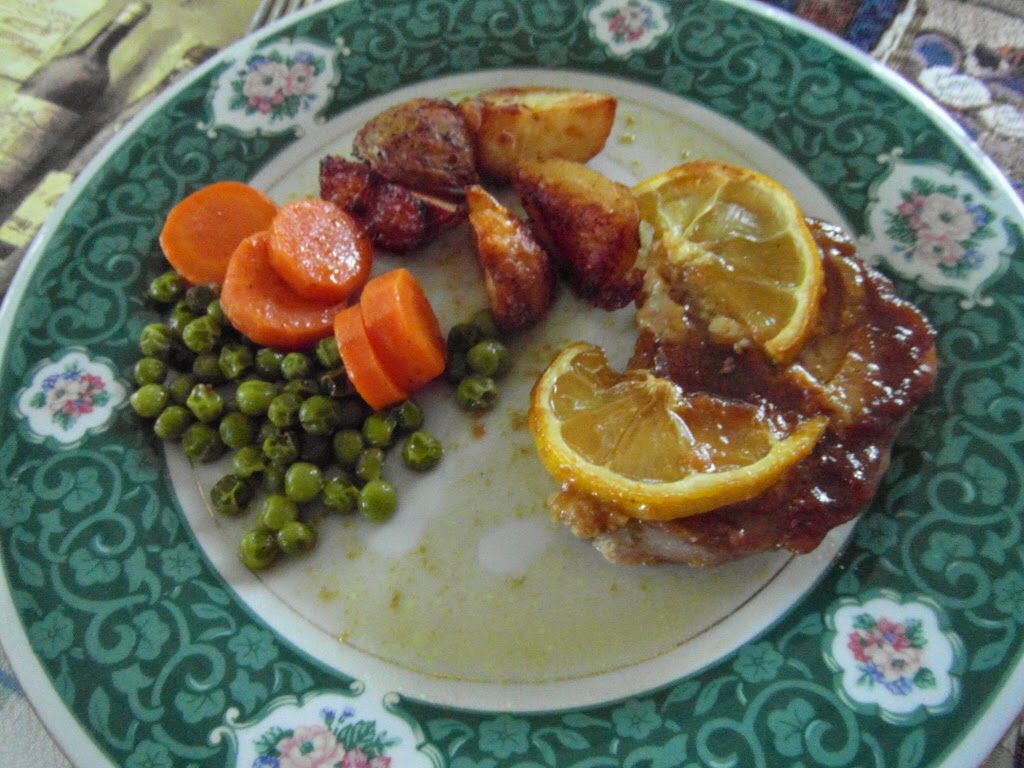 I have enjoyed this dish since the late 1960s.  The recipe for the chops came from the Star Weekly Magazine and was printed in their Star Weekly Cook Book in 1967.  I have made them throughout the many years since.
Preparation time is only about 5 minutes and baking time: 1 hour.  They can be prepared ahead and baked before serving.  Just don't forget to check the oven!
Sweet and Sour Pork Chops:  4 servings
4 one-inch thick pork chops
Salt and pepper
3/4 cup brown sugar
2 tablespoons prepared mustard
1 lemon
Heat oven to 350F/180C.  Arrange chops in a single layer in a casserole dish.  Don't leave too much space around them.  Sprinkle them with salt and pepper.  Mix together the brown sugar and the mustard and spread it evenly over the 4 chops.
Cut the lemon into 4 slices.  Place a slice on each chop.  Squeeze the juice from both ends into the casserole dish around the edges (not on the chops); add 1/4 inch water.  Bake chops in preheated oven about 1 hour or until tender.
I usually put whole potatoes into the oven to bake at the same time; both the chops and the potatoes will be ready in an hour.  If the potatoes are not done, remove the chops and keep them covered; raise the oven temperature to 400F/200C and check the potatoes for doneness in about 10 minutes.  (This time I had cut-up potatoes instead.)
Along with a vegetable and a salad it is a simple meal.  Teens like this as do younger children.
A day or so later Mary left for Ontario and home.  From then on, I was busy until I returned to Germany less than a week later.  Fall was closing in although the weather was still lovely.  I did capture on camera some of our animal visitors during that time and over the summer.
Yes, we see skunks every so often.  They come by but just keep going. 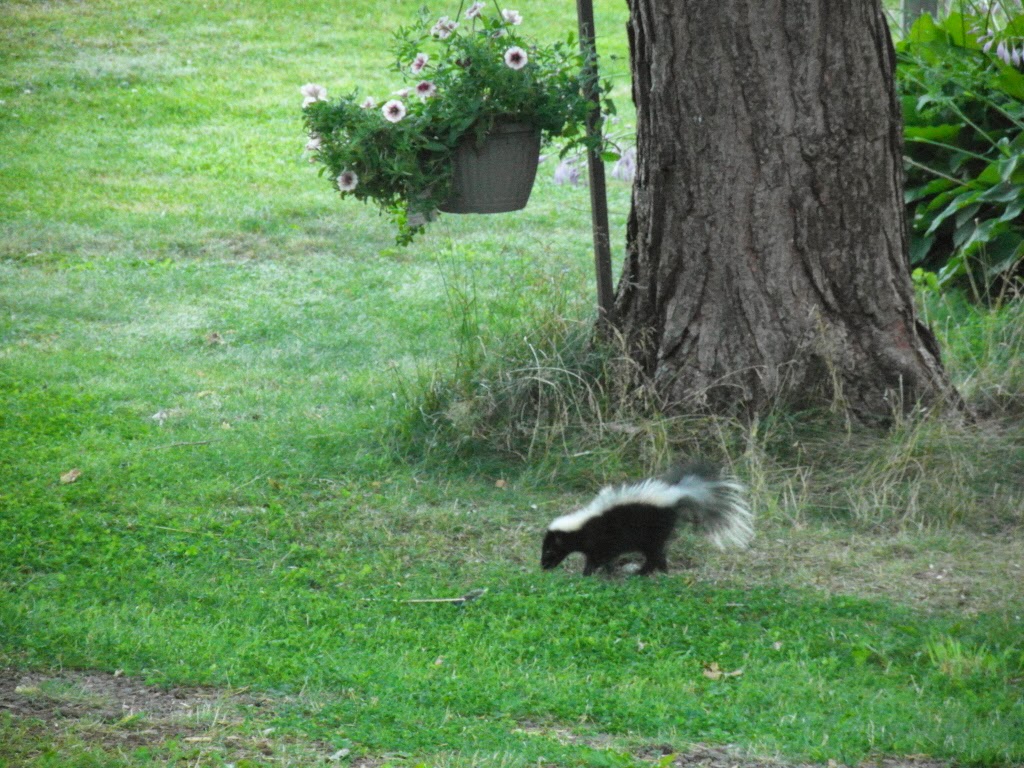 ﻿
The raccoons come around towards evening and thus far have done no damage.  Hans feeds them; I do not. 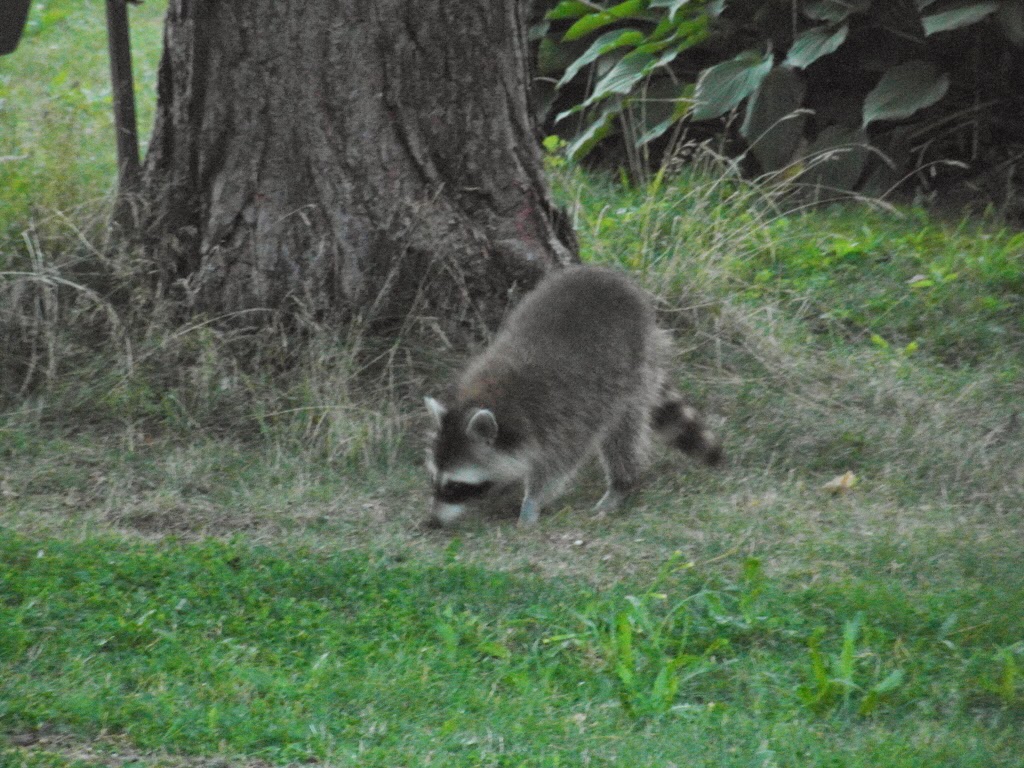 
These beautiful creatures are so timid that at the least sign of movement they are off and running.  I took these two pictures through the front porch windows (as I did the other two as well). 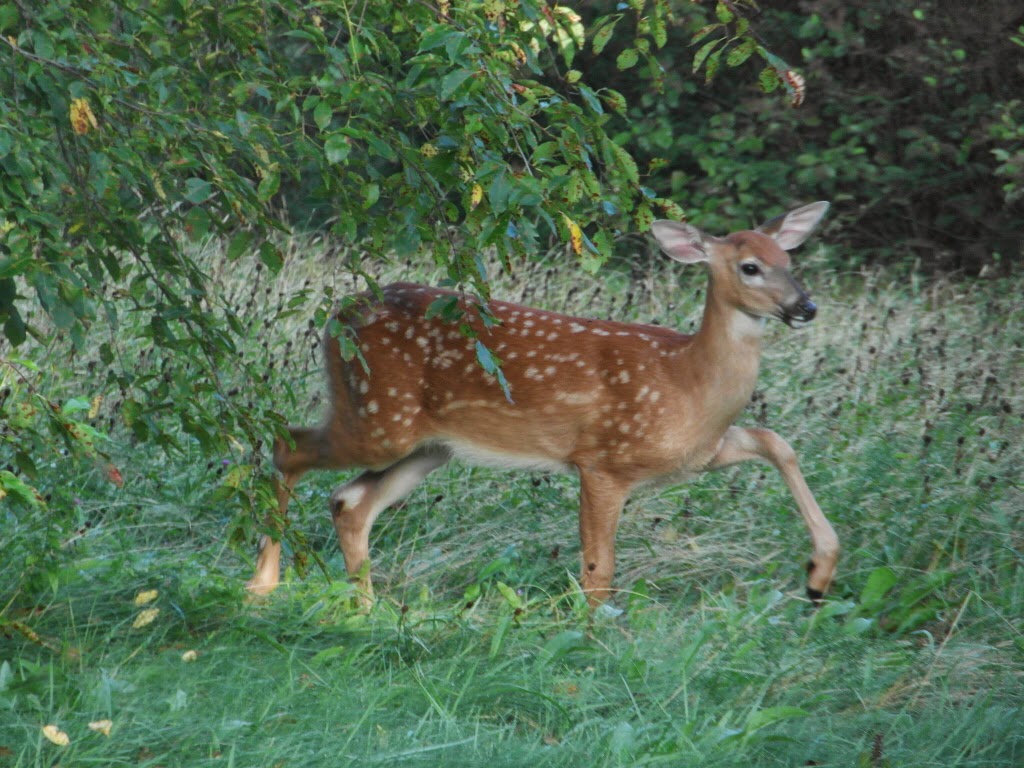 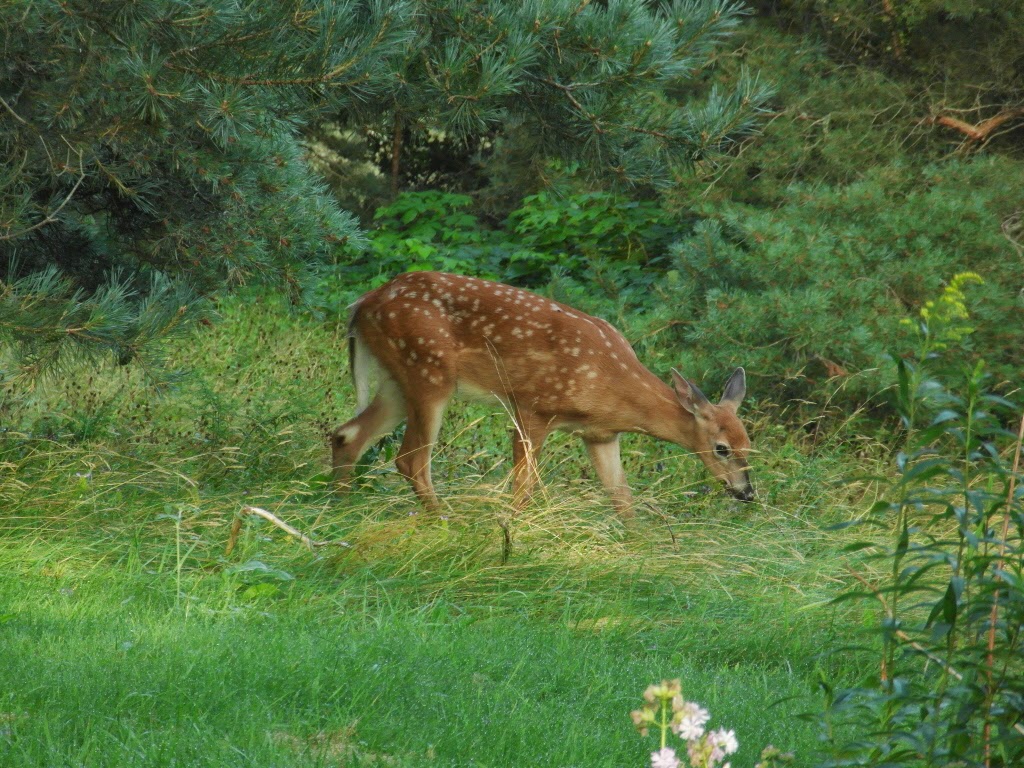 ﻿
To those in Canada and the United States with snow and cold temperatures, keep warm in a cosy kitchen and enjoy some home-cooked food and a glass of wine or a well-poured beer.
Cheers! 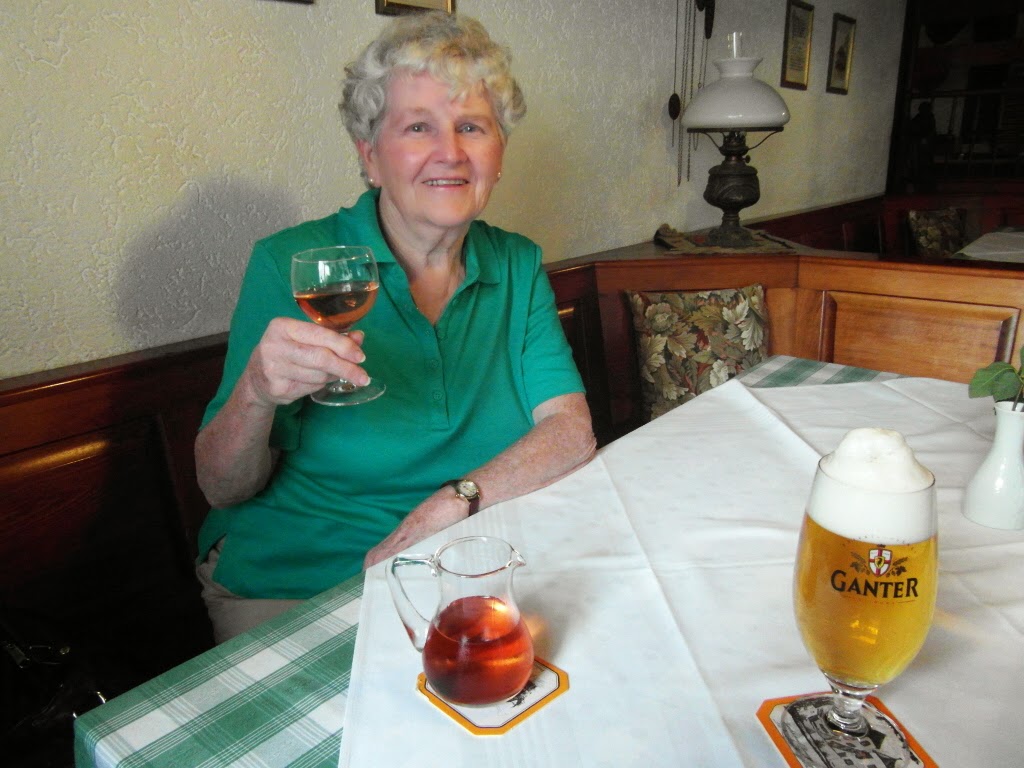