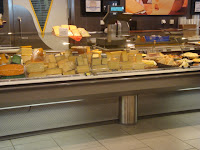 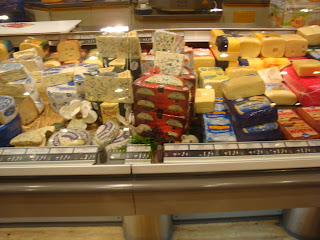 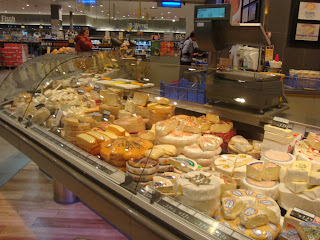 In Germany and across the Rhine River in Alsace, France, we are able to purchase so many varieties of cheese that one is hard-pressed at times to decide upon which ones to choose.  Cheese is reasonable in price here, which means one doesn't think twice about buying a large round of Brie, Camembert or Munster for example.  (The cost in Nova Scotia is two to three times higher, although this doesn't include Cheese Whiz or other similar processed types as they are sometimes cheaper in Canada.)  The above cheese was showcased at the Edeka, a medium-sized supermarket in Ettenheim, Germany, .  That below is a small sampling at the supermarket in Rhinau, Alsace, France. 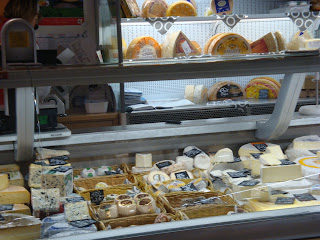 Recently we had Canadian friends for a "cheese board" supper. Hans had bought ten different types of cheese, some of them in the Alsace, some of them in Ettenheim.  All were excellent.  Along with the cheese, we had freshly baked baguette, which Hans bought in the Alsace at a small bakery in Rhinau that same morning.  With it all, we served cherry tomatoes, radishes, grapes and a small dish of caraway seeds--a must with Munster cheese.

Below, from top right and then clockwise:  Munster (from Alsace, France), Camembert (French), Coulommiers (French), Soumaintrain from Burgundy, France and Bavarian Bleu (Germany).  These are all soft cheeses. 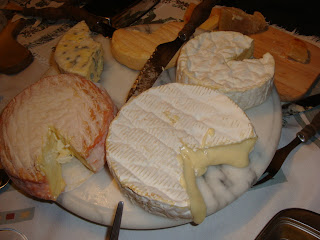 Below, from top and then clockwise:  goat cheese (France), Roquefort (France), Parmesan (Italy), English Cheddar (Shropshire, England) and Comte, the most often purchased cheese in France.  These are hard cheeses except for the goat cheese, which is semi-soft. 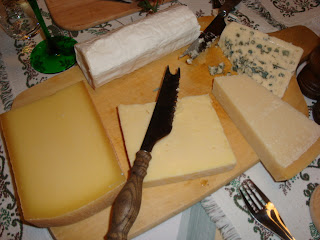 Some cheese requires a red wine, others a white; some require a wine with a lot of flavour, others a milder one.  The picture below shows the wine we had that evening.  The first, on the left, is a red Bordeaux; the one in the centre is a red given to us by a former Legionnaire, one that the French Foreign Legion members enjoys as a table wine.  The last is a German Gewürztraminer from the Kaiserstuhl--half an hour south of us--and one that is recommended for Munster cheese.  We had also had a Champagne-type wine, a German Sekt. 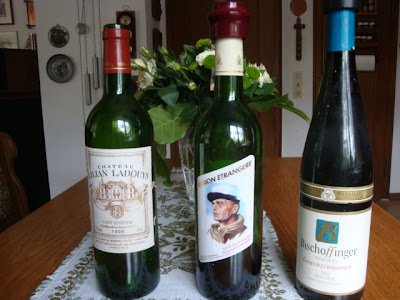 A few days later, we had a cheese board again with our friend Jean visiting from Nova Scotia, who proclaimed it to be her favourite meal.

According to the small book, The Cheese Companion, the production of cheese goes back at least 5,000 years, so for all those years since then it has been enjoyed by hundreds of thousands of people in many different countries around the world.  No one knows when cheese was first made.  Sheep were domesticated thousands of years ago and Ancient Egypt raised cows, with cheese being made from the milk once its potential was realized.  Later, Roman soldiers received a regular ration of cheese, so wherever the army went and set up camp, cheese making followed.  That included Germany as the Romans marched through here about 2,000 years ago, leaving behind their ways for not only cheese making but also for grape growing and wine making. 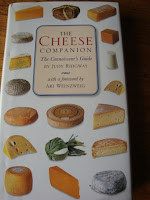 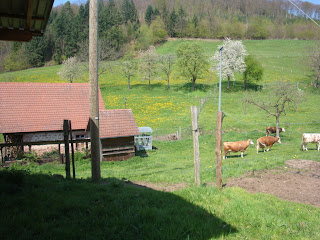 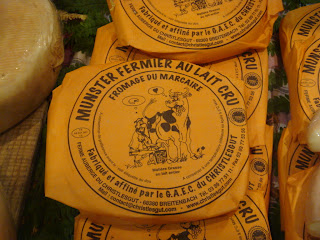 Cheese in those long-ago days was all made from raw milk.  When Louis Pasteur invented pasteurization in the1850s, the making of cheese changed.  Some cheese makers still do make cheese from non-pasteurized milk, but they must be careful as certain microorganisms can spoil the cheese as well as endanger the person eating it.  When done properly, most cheese connoisseurs prefer their cheese made from non-pasteurized milk; however, that cheese is becoming more and more difficult to find on the shelves these days, which is a shame.

Hans always looks for the raw milk cheese to purchase as it is far superior than the type made from pasteurized milk. We can find it in France, particularly at a farm fromagerie, but also at a supermarket there; in Canada, it is still produced and sold in Quebec, the only province I believe that allows it.

The Munster cheese above is from the Alsace.  The words "Au Lait Cru" mean it is made from non-pasteurized milk.

One of our favourite suppers is raclette, using an electric raclette device that we bought some years ago in Gruyere, Switzerland.  It is similar to the type used at the restaurants in Gruyere, where Hans and I had raclette on that same day trip.


The picture below shows a typical piece of cheese for raclette. 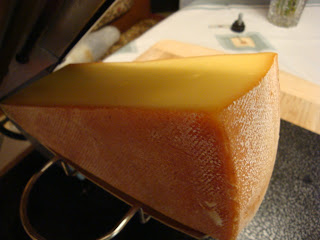 For raclette one needs a good-sized piece of hard cheese.  Many supermarkets or cheese counters sell cheese with the name Raclette; otherwise, buy a good-sized piece of Gruyere if you can find it.  With our machine, the cheese is set on a steel swivel that is placed against the hot burner.  As it melts, you lift the melted cheese off onto your plate of hot boiled potatoes.  You can, of course, add salt and pepper to the potatoes before the cheese. 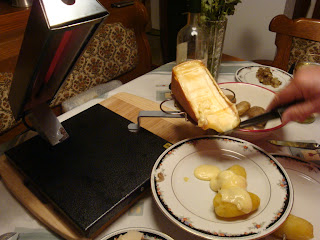 Along with the cheese and potatoes, we have a mixture of sweet pickles, small white pickled onions and finely chopped coleslaw.  You can also use mushrooms or vegetables of choice, such as cauliflower (which should be blanched or partially cooked first). 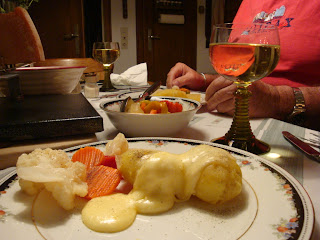 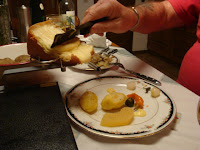 Wine for raclette is usually a white wine, although a rose or Sekt (Champagne style) is also very good.  Others might prefer a red.  One of our favourite wines is a Scheurebe which goes well with it; however, that wine is usually only found here in Germany.

Cheese is a mulit-faceted product and one that can be eaten by itself as is, baked or broiled with other food or added as an ingredient to many types of recipes.  Here is one of my specialties that we have a few times a year at home, usually accompanying peppercorn steak flambeed with Cognac, a Chateaubriand or other special beef or pork tenderloin dinner.  It also goes perfectly with roast lamb and is usually served with it in a good restaurant here in Baden-Württemberg. 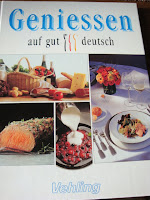 This recipe came from the cookbook, Geniessen auf gut deutsch.  I translated it from the German and made a few changes.  It is one of our favourite potato gratin dishes.

A 9-inch square baking dish is large enough for 2 to 4 persons.  For the two of us, I use a round 8-inch pottery casserole that can be put in the oven.
Preheat oven to 400F/200C.


First, rub freshly cut garlic all over the inside of the dish.  Butter the dish well.  Place the sliced potatoes (as many as you want to use, raw or partially cooked) into the buttered and garlic-rubbed baking dish.  Season with salt and pepper and sprinkle with nutmeg.  Sprinkle with minced garlic; I mince the garlic used for rubbing the casserole dish plus one or two more, depending on the size of the cloves, but don't overdo it as you do not want the garlic to overpower the flavour of the gratin.  (The additional garlic added is not part of the original recipe.  I did not use all the garlic cloves shown below.)

Note:  You can cook the potatoes first until they are almost but not quite tender (and then slice them), which means they will take less time to bake in the oven.  Or you can slice them uncooked, which means they will take about 45 minutes more to bake than the cooked ones.  Note:  When using uncooked potatoes, you can instead place the casserole dish in a slower oven, 180F/80C to 250F/180C for one hour; then raise the temperature to 400F/200C and bake for an additional 15 minutes or until the potatoes are tender and nicely browned.  I have baked mine from the cooked and the uncooked state.  It is definitely faster using cooked potatoes, but don't overcook them.  Last week I used them raw. 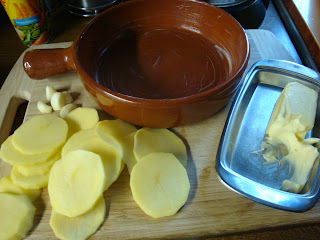 Pour whipping cream over the sliced potatoes until you can see the cream through the potatoes (the cream will not be covering them totally).  Gently, using your hands, mix the potatoes with the cream so that none are sticking to each other.  (I use half whipping cream and half creme fraiche; the recipe just calls for cream.) 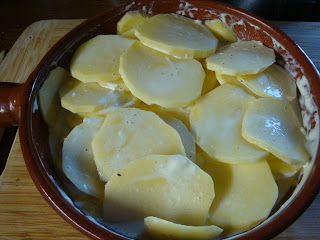 Sprinkle Swiss cheese (Emmental or Gruyere or half and half of each) over the potatoes.  I sometimes use half Emmental and half Cheddar, which is also very good.  Last weekend I used half Emmental and half Mozzarella, also tasty.  (The recipe just says Käse without saying which type of cheese.)  Cover it well with dabs of butter.  Bake in the preheated oven until the potatoes are tender, about 40 to 60 minutes.  Cover with foil if the cheese browns too quickly.  The time will depend on the size of the dish and the amount and type of potatoes you have used.  (With the dish shown, we always have enough left for a second meal.) 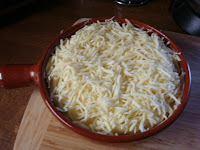 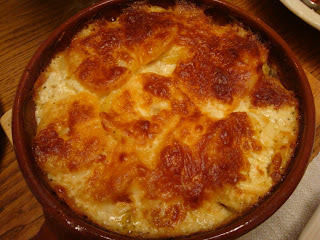 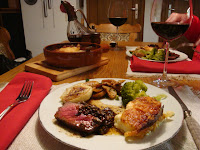 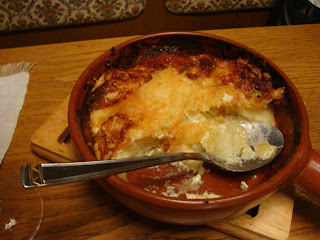 This was our dinner last January:  pepper steak flambeed with Armagnac, Steinpilzen (a special type of mushroom), broccoli, fennel and  potato gratin. 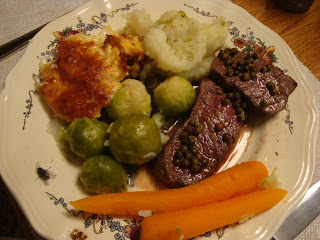 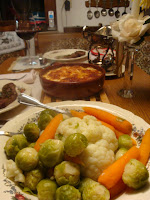 This was our dinner a week ago:  pepper steak flambeed with Cognac, gratin, caultiflower, brussel sprouts and carrots, with hollandaise sauce served separately.

For wine, we always have a red Bordeaux with a steak dinner.  This was a 1996 Grand-Puy Ducasse (Pauillac, Gironde).  The label had mold on it but the wine was perfect still. 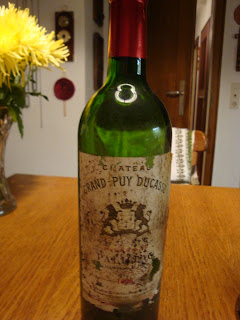 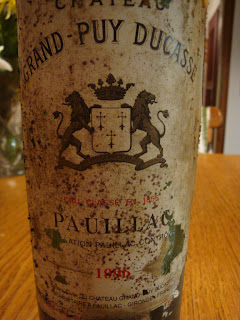 Posted by Janet MacDonald at 3:00 AM 3 comments: