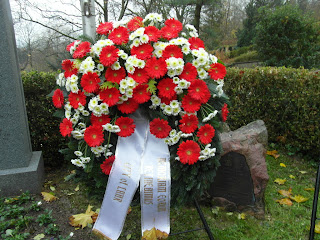 The City of Lahr Wreath in Commemoration and Honour of the Canadian Fallen
It was dreary and chilly last Sunday as it often is on Remembrance Day.  We stood at the top of the hill at the Lahr cemetery where the Canadian cenotaph is located.  All of us had gathered there just before 1100 hours for the service to remember and honour those Canadian military men and women who had died in battle.  The Canadian Legion with Colour Party along with other Canadians, Germans, members of the German-Canadian Club, the City of Lahr and a German band were represented.
Dipping the flag 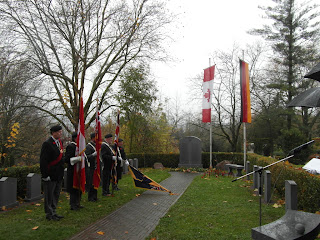 ﻿
I was only 17 when my eventual husband-to-be joined the Royal Canadian Air Force.  He served for 28 years (two tours in Europe) before he died--while still serving, although not in combat.  Hans also served for 28 years (including two peace-keeping tours in Cyprus and Egypt) and another 10 years at Command Headquarters Europe as the Command General Safety Officer.  I worked for the Canadian military myself for about 14 years, two of them at RCAF Station Lachine, Quebec, and 12 years at Canadian Forces Hospital Europe.  So I have been part of the Canadian military family for much of my life. 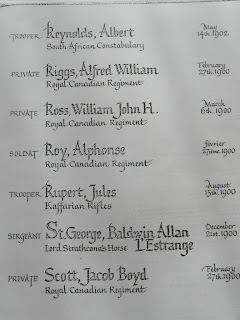 Long before I became a wife, mother and partner, I was a very patriotic young Canadian girl.  I already knew as a child of ten that many had died in World War II.  I later read much about that terrible first World War.  I also knew that my great uncle, Alfred Riggs, had died in the Battle of Paardeberg during the South African Boer War.  He was just 22 and a medic.  I had never met him, of course, and neither had his nephew, my father, as he was born several years after that.

At left, a list of men who died on the date shown to the right of their names.  My uncle's name is second from the top.
Alf, as he was always called in the family, was an artist (on his military papers he is listed as a painter) as was my father.  My uncle died on 27 February 1900, the last day of that famous and terrible battle.  He was part of the 2nd (Special Service) Battalion of the Royal Canadian Regiment and is buried in Cornwall cemetery, Paardeberg.  He received the Queen's medal with two clasps posthumously.
Today, the Boer War is rarely mentioned on Remembrance Day. So many young Canadians in our wars died far from home in service of their country and should be remembered always by that country, no matter the war nor how long ago it was.
﻿
A salute to the fallen 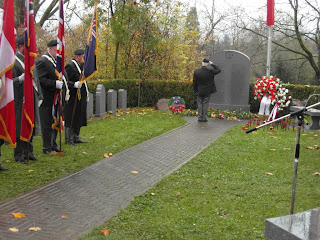 After the Service
﻿
We all met after the ceremony at the Legion meeting place--the Gasthaus Linde in Reichenbach--for clam chowder, a tradition on this day.  Bill Fairley, Past President of Legion #2 in Lahr, Germany, made the chowder as he has done for several years.  We all agreed that it was the best yet.
The half-empty pot of clam chowder and, in the picture at right, Bill at centre 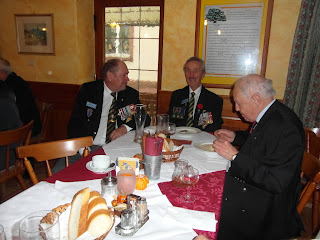 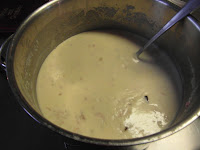 ﻿
﻿
On the right, below, Reg Bonner, Zone Commander, Europe; on the left, Bill Fairley, Past President of Legion #2
﻿ 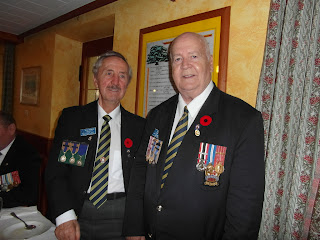 Following are a couple pictures of those who attended: 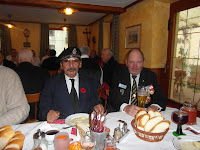 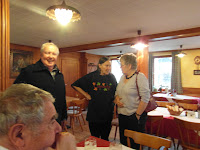 At left, Albert Schneeburger; on his right, Ken Gardener


At right, Fred and Barbara Lacombe with Trisha Cornforth in centre

Hans wearing the Queen's Own blazer and tie with crest and medals, the regiment he served with during his first three years in the Royal Canadian Army.  His next 25 years were with the RCA Medical Corps which later became the Canadian Forces Medical Services.  ﻿ 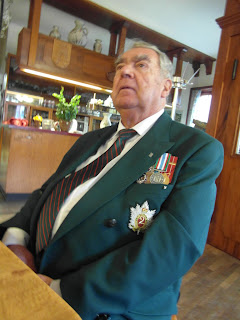 There have been, and still are, so many wars where thousands are dying.  Let us hope that one day peace will reign around the world.  I have always thought that all those who fought, on whichever side, did what they had to do.  They all were soldiers, fighting for their country, no matter their politics.  Hans and I will always honour and remember those who lost their lives as well as all who were badly wounded in their fight for freedom.


As always, the Remembrance Day Service is a solemn occasion and a time for reflection.  It is always a sad time.  So many everywhere have died for a cause--whether right or wrong.  Let us hope that all will soon fight for the cause of freedom and the rights of all without bloodshed. 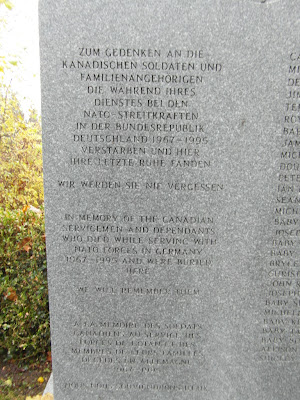 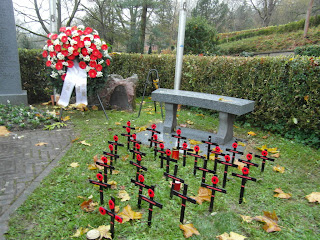