A Cooking Class at the Romantik Hotel Adler Post

This lovely family-run hotel is no longer in business, but the memories of those days and special weekends have lingered on.  So now, a small look back to those special times. 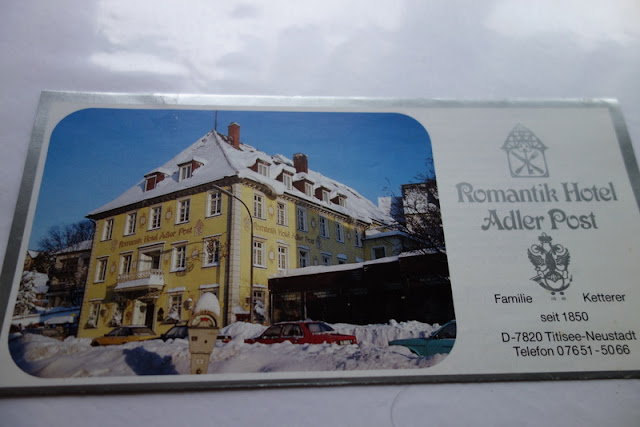 The hotel in summer 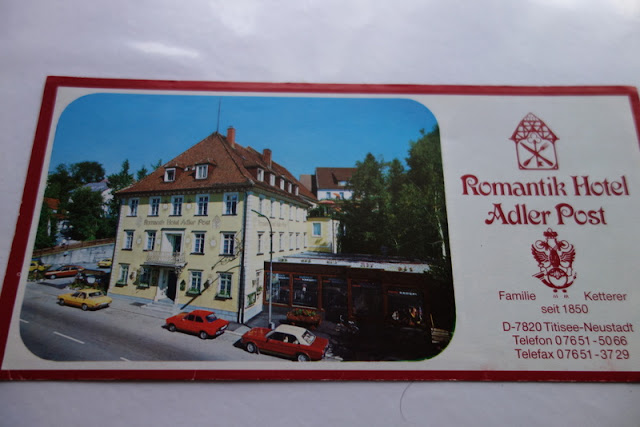 We were greeted with Champagne by Herr Ketterer and his wife.  That marked the beginning of a memorable weekend in April 1988.  We would be participating in a weekend cooking course at the Romantik Hotel Adler Post in Titisee-Neustadt, a small town east of Freiburg and not far from the skiing hills of the Schwarzwald or, as many know it, the world-renowned German Black Forest.

(Many of my pictures are in black and white as at that time the papers preferred it.  I was considering writing about the cooking course weekend later on.)


Below, Herr Ketterer and his wife on that first occasion 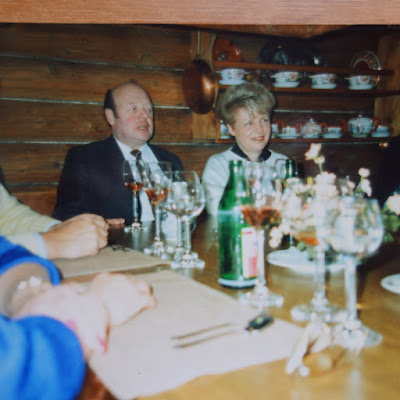 I had checked some brochures and saw something about the Adler Post re special weekends.  I wrote the hotel for a little information, receiving a letter back from Herr Ketterer, the owner, inviting me to attend one of their cooking class weekends.  I accepted.  He told me that some teachers from CFB Lahr had taken part in a cooking weekend there a few years earlier.

On this occaasion, all of the participants were special guests of the hotel, including me.  Several were journalists or writers.  I had written several articles for Der Kanadier, the Canadian military newspaper in Germany.  I had also had several articles published in Toronto's The Globe and Mail, thus I thought this might be a good opportunity for another.  As it happened, I wrote only a draft about that weekend but I did write one for Der Kanadier about Titisee -Neustadt. Thus I can rely on those as well as my memory as I write about it now.


Here I am in the kitchen on that long-ago weekend 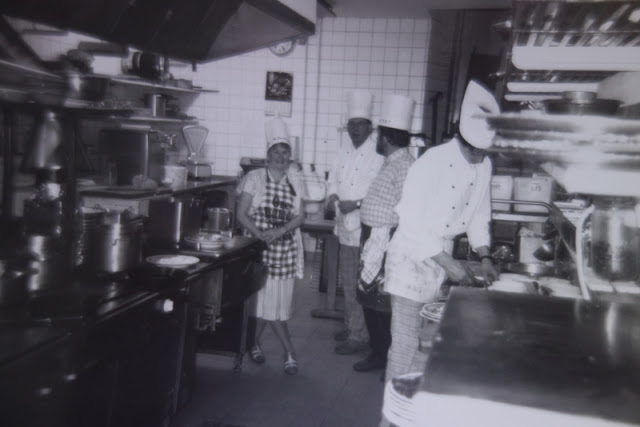 We worked in the restaurant's main kitchen under the guidance of master chef Herr Lipp with the restaurant's master chef, Herr Heim, offering tips as we chopped, simmered, stirred, sauteed and cleaned up.  (No food of any kind, once finished with, was to remain on the board and counter.  The rule:  clean as you go).  The ultimate was being served our five-course dinners in the main restaurant dining room as though we were royalty. 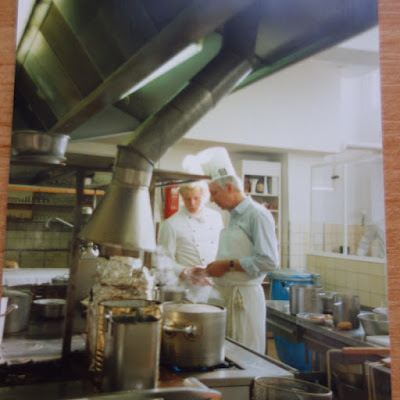 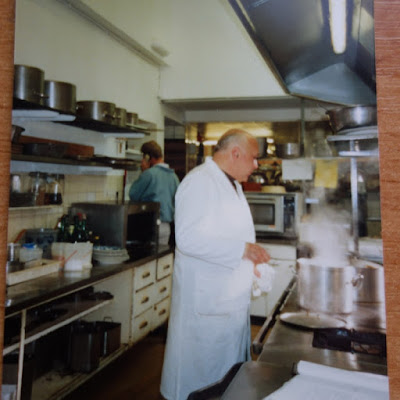 The kitchen, below, where we all worked, almost alongside the chef and cooks who were busy preparing for the main restaurant area guests. 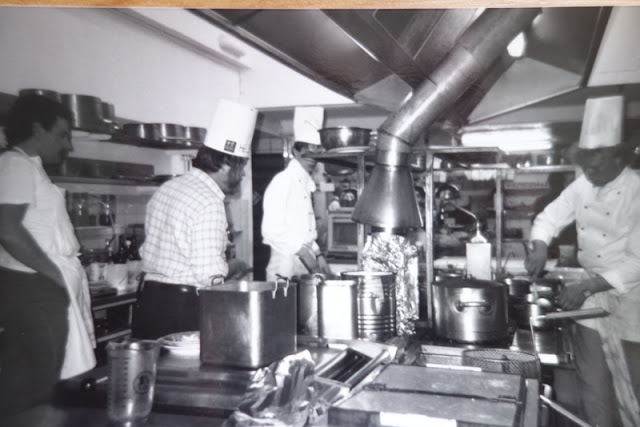 Upon entering the hotel that first evening, we were immediately transported back in time by its bygone-days' atmosphere.  The building dated back to the 1500s when it was a coach and mail stop between Alsace in France and Innsbruck, Austria.  Its cosy rooms, wooden beams, antiques and soft lighting reflected its age and the care given it by the Ketterer family, who had been carrying on the inn tradition since 1850 (no longer a coach stop of course).


The maitre d'hotel serving us one of the courses. 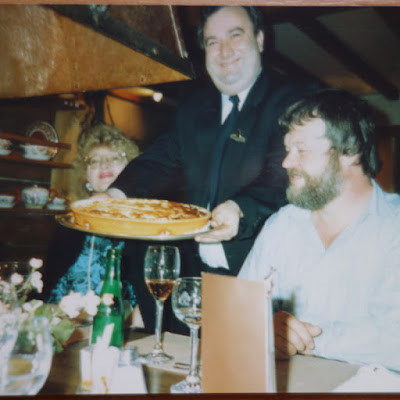 After our arrival that evening, we sat down to an unforgettable seven-course gourmet menu, accompanied by various wines.  All of this was "on the house."  From then on, though, we were the cooks and concocted such superb dishes as crayfish soup with snow peas, trout fillet with cream sauce and sorrel and an almond cake.

The maitre d'hotel showcasing the cake before serving it to us 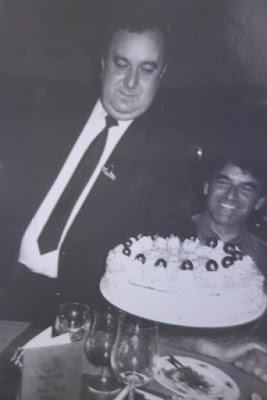 As an aside, everything we cooked was served to us for dinner by the waiters and waitresses of the restaurant, which meant a five-course meal each time.  Herr Ketterer dined with us.

The master chef instructor Herr Lipp (below), who was our chef that weekend (and the other weekends as well), was then the Master Chef Instructor at the Cooking Academy in Villingen-Schwenigen.  Prior to that, he had been the head chef in the Romantik Hotel Adler Post. 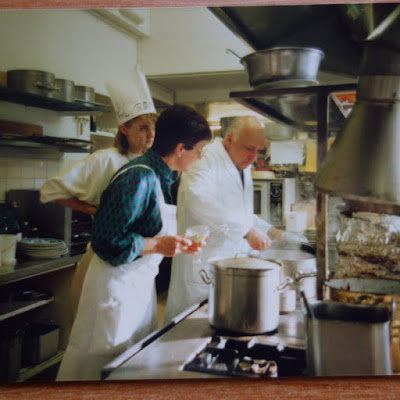 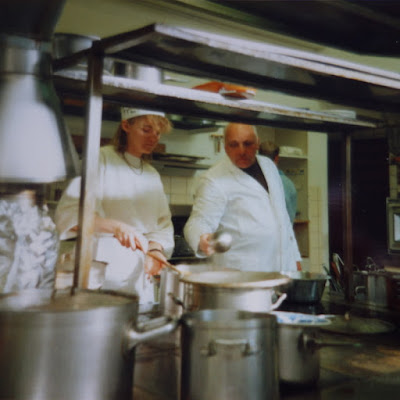 A group of us beside the stoves and getting some cooking advice.  I am on the left in front.  Herr Lipp is peeking between us from the back. 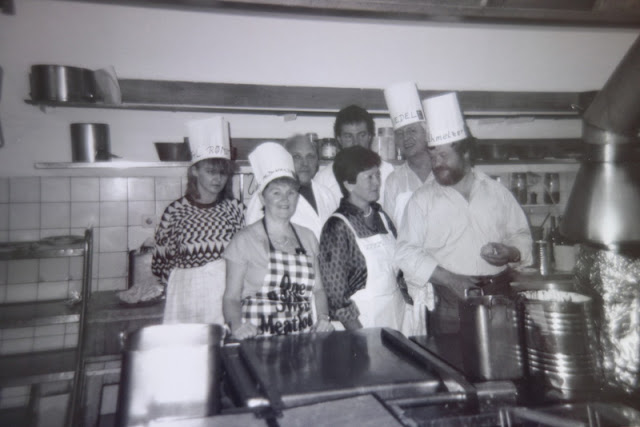 After that first cooking weekend, the following year, April 1989, I organized one for twelve people, all of us part of the Canadian military communities at CFB Lahr and CFB Baden-Söllingen in Germany.  Hans did all the translating and interpreting.   Of course, being a German restaurant, the chef, Herr Lipp, spoke German as did the rest of the staff.

Herr Ketterer did speak English however, but all the instructions from the chef were in the German language.  They sent me the menu ahead and Hans translated it into English, which we then used for our cooking and for the half hour prior to each class when Herr Lipp described what we would be cooking and how some things would be done.

Peter and Mary, below, participated in the first course I arranged.  They came down from Baden-Söllingen. 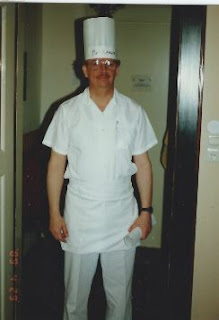 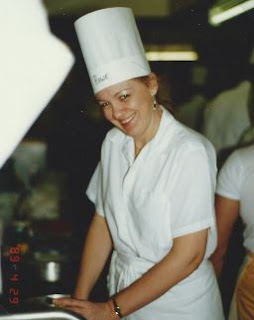 (Some of the next few pictures were ones they took on that weekend--including the two of them above--as I could not find any other than my black and white ones.  All of the latter I took.  I also took pictures of the ones I did have, including the brochures and post cards.)

The invitation and information, shown at left, I sent out.  The one on the right, with date and place, I received from Herr Ketterer 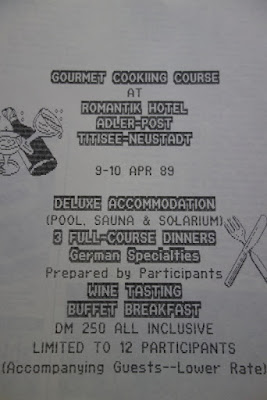 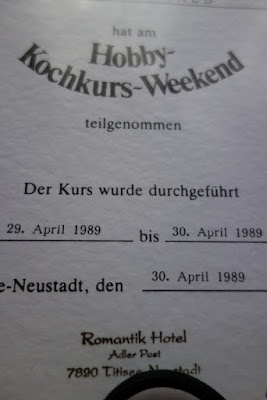 This was my hat and all of us wore one in the kitchen.   I am a "Mac" in case anyone notices! 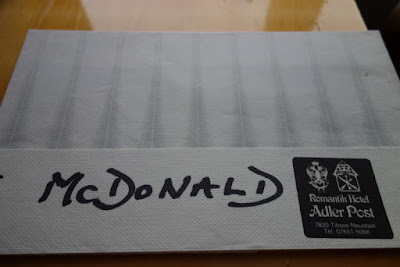 Below, left: Herr Lipp partially hidden on the left of the picture.  Mary is in white at the back. 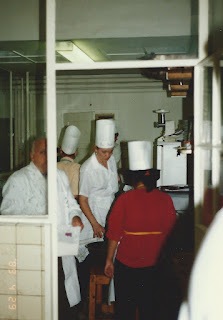 Below right: I am on the right and Hans to the left; Susan H. on the left of Hans 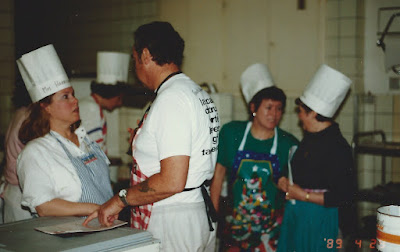 A good view of the kitchen below.  I am on the left and Susan, beside me.  Since those days, nearly all Gasthäuser and hotel restaurants have updated and modernized their kitchens. 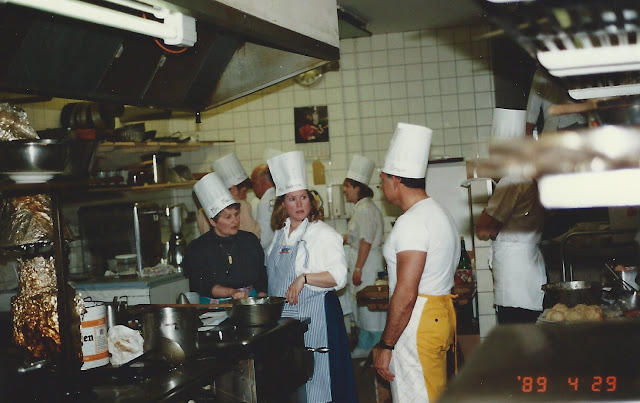 It was interesting watching everyone work.  The men dug right in without a problem.  We women were a bit slower getting used to things, partly, I suspect, because we were so familiar with our own kitchens and utensils at home.

Hans tells the story of us all preparing Spätzle, a type of pasta that is a specialty in Baden-Württemberg.  The men went right to work, slicing it and pushing it off the wooden board with a knife directly into the pot of boiling water.  We women (well, some of us, including me) were slower and likely just wanted to do it perfectly, whereas the men were not so fussy.  I am sure many of us understand that! 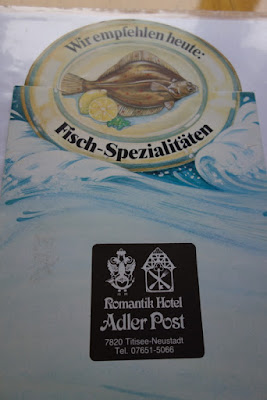 Here are three of the recipes we prepared at the cooking class I organized in 1992.  By that time, I had suggested, "no recipes please using brain or kidney!"  Europeans do like them but not I nor many Canadians I know, although some do like kidney and, perhaps, even brain.

Note:  In Europe, most recipes are given in metric, not ounces/pounds.  I have a small scale I use for such recipes.  You can, however, give it a try yourself.  If 500g = 1 lb, then 80g equal almost 1/5th of a lb or close to 3 ounces.  A few vegetables somewhat more or less should not affect the recipes.

Preparation:  Salt and pepper the perch/Zander and roll in flour.  Heat oil in pan.  Quickly fry fish on both sides and then lay fish on the belly, side down (back up).  Place pan with fish in 200C/400F oven for 20 minutes, basting frequently with oil.

Place onions and fennel or leeks at side of fish until yellow, approximately 10 minutes.  Remove fish and put on hot platter or separate hot plates and keep warm. Add cream to the pan fish had been cooked in, blending in, while constantly stirring.

Pour lemon juice over the fish on the hot platter and sprinkle with parsley.  Pour sauce and remaining vegetables around the fish.

The following recipe is for wild boar but it could also be used for venison or moose meat the chef mentioned.

Marinate wild boar steaks in oil and the spices forat least three hours.  Remove the steaks and dry them with paper towels.  Salt and pepper them and then roll them in flour.

Fry them to medium rare at medium heat in vegetable oil.  Remove from pan and keep warm.

Pour off the fat from the pan and add butter, allowing it to melt.  Saute the onions in the butter.  Add the chanterelles and heat.  Add creme fraiche and cook for a short period of time.  Add red currant jelly, stirring it in, and pour over the steaks.  Sprinkle with chopped parsley.
A typical Feldsalat 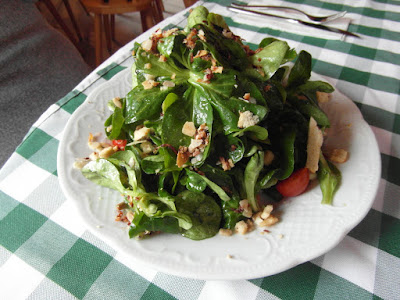 Here is the Adler Post's recipe for Feldsalat dressing.  I have mentioned this special salad a few times in my various blog posts.  It is still in season here in Germany as it grows from late fall until almost early spring.  Feldsalat is sometimes called lamb's lettuce in North America.

Mix all ingredients together except for croutons.  Pour over the salad leaves and toss them lightly until well moistened.  After sauteeing the croutons (can be done ahead), sprinkle them over the bowl of salad or over individual small bowls of the salad.

My suggestion:  Sprinkle, if wished, some chopped walnuts or other nuts over the salad as well.

The following recipe is from our cooking class in 1989.  It is quick and easy to prepare and it was very good.  Nice first course for a dinner party or as the main course for a small supper along with some good French bread.

Place snow peas in chicken stock and cook for a few minutes.  Then, remove from the stock and blend or grate them until fine.  Strain back into the stock and bring to a boil and let simmer.
Add cream, butter, and the salt and pepper to taste.
Place in preheated bowls and add cooked crayfish tails or shrimp.

PS:  I might place uncooked shrimp in the stock and cook until pink and ready to eat.  The recipe I have does not mention that and I have now forgotten.  As I love shrimp, I must try this recipe again myself!

Our diploma and got my name perfectly! 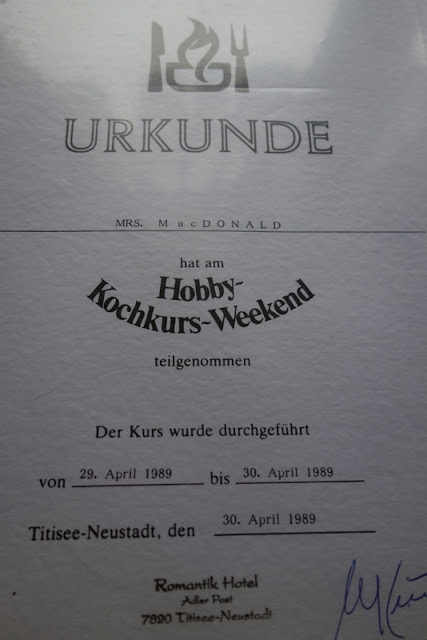 Between cooking stints, we relaxed in the pool and sauna or in our room where fresh flowers, fruit, chocolate and magazines awaited us.  At night, we pulled down-filled covers around us and sank into a deep sleep, lulled by our accomplishments and the warmth, wine and food.

At the end of the weekend, Herr Ketterer's 80-year-old mother wished us a safe journey home.  It was a fitting ending:  past and present melding.  We had come away with superb recipes, had drunk some great wines and had been catered to by a family and staff who believed their guests were special.

Prosit to you all and to those wonderful Romantik Hotel Adler Post Weekends! 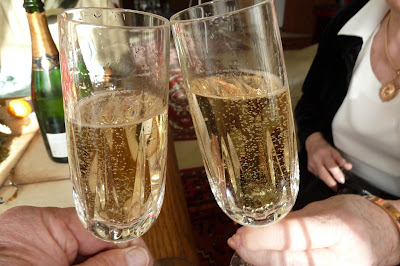 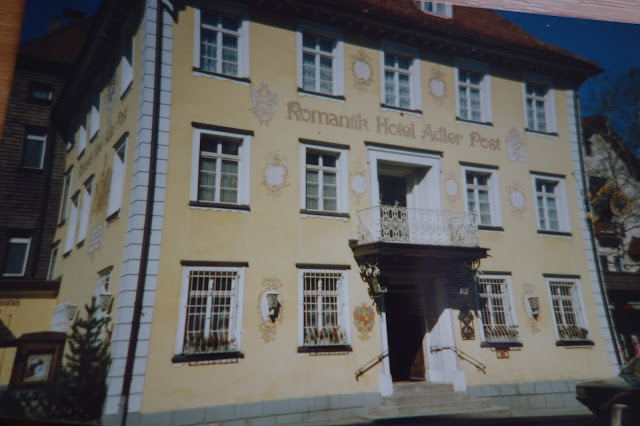 For those new to my blog, you can enlarge any picture just by clicking on it.  Just click outside the square to return to the page.
Posted by Janet MacDonald at 7:28 AM 1 comment: