Merry Days of Fastnacht and Quiet Days of Lent 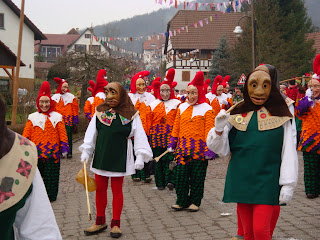 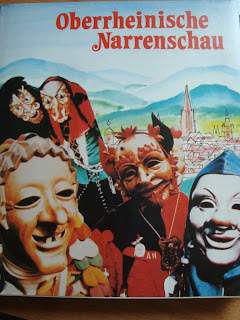 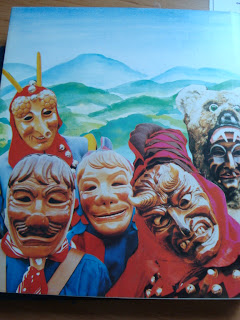 The pictures on the left and right are on the cover of a book about Fastnacht and show the typical masks worn during Fastnacht in the Upper Rhine area of Germany.  The Upper Rhine is actually in the southwestern part of the country as is the State of Baden-Württemberg where we live.

The pictures above and below those two I took in our own town two years ago.  We didn't get to any of the large parades this year as I had a cold and the weather was no different:  Very cold!  The costumes in each town are the same every year. Fastnacht is the precursor to the forty days of Lent.  It begins in Baden-Württemberg about six to eight weeks before Ash Wednesday.  In that period between, towns celebrate on weekends with parades and with musical evenings and skits in their sport halls.  In that last week, the young and the old go out on the town--the majority in costume--to enjoy the fun and camaraderie that accompanies it all.  The participants also fill the Gasthäuser to capacity and make merry into the wee hours in most instances.

We took part in one of those evenings, although we didn't revel past 10 p.m., being two of the early birds.  For one thing, I was suffering from a cold, which got worse as the week progressed, which meant I didn't get out to much else.  But that one evening--Dirty Thursday--was one of the biggest as it was the beginning of the celebrations of that last week. 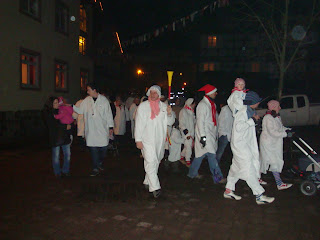 We, by the way, are not in the nightshirt parade shown.  These are all townspeople from Münchweier.

In the Alemannisch language--used everywhere in our area--it is called Schmutziger Dunschdig.  That is the traditional evening of the Hemdglunker-Umzug.  In Münchweier--as in many other towns--that is when the young women and men, babies, children and entire families dress up in their nightshirts and parade around the town after dark.  Anything supposedly goes when it comes to the young women and men! 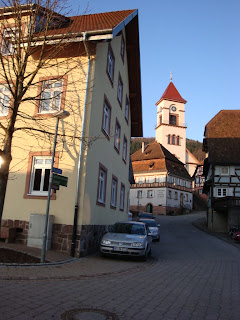 The Gasthaus Rebstock in Münchweier is at the left forefront.  The street down which the parade participants come is shown to its right, with the church just above.

The Rebstock is where many of the celebrants eventually end up, so we made sure we were early enough to get a table in the main room near the bar.

Some of the ladies, also in costume, who served the crowd 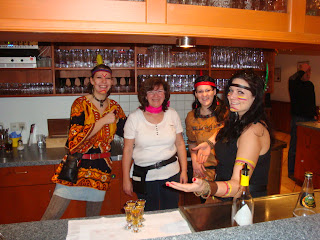 The back room filled quickly when the parade ended.  A sea of white greeted us with some blue, green and red stripes here and there.

A band arrived, playing as they entered, while children started dancing.  Overall it was a joyous and noisy occasion. 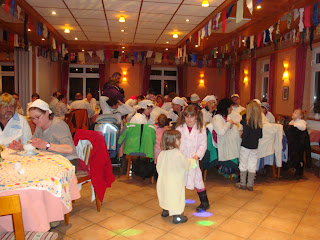 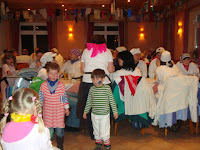 A couple of the dancers and children enjoying the fun.

The arrival of the band 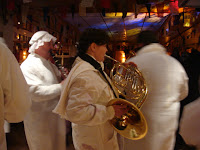 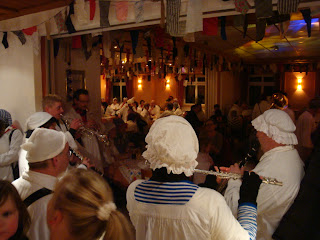 A group of young men grabbed a table across from us in the main room, drinking beer directly from a keg--though we did see them adding mineral water to the keg.  First time I have seen that.  They were in high spirits, enjoying the beer and the atmosphere, full of fun and always behaving courteously.  Not sure how they felt at the end of the evening! 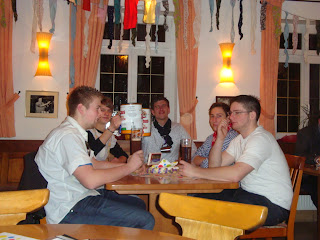 Just beyond them and also across from us was a long table with ten or so elderly people enjoying supper and their wine.  This was a group of wanderers (all in their 80s), although I don't know if they had been walking far that day.  It was the same group that had sat at that same table two years ago when we were there as well.  This is a Gasthaus we frequent so we know and recognize many who come there. 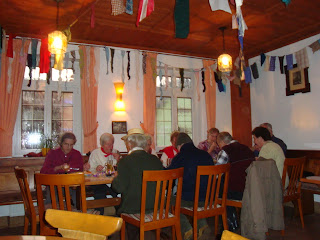 The Stammtisch, below, was well represented as always. 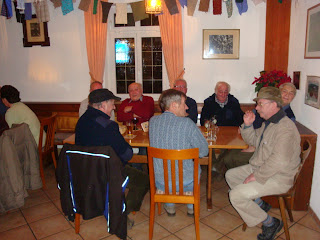 Directly ahead of us, at another table, a couple who, we think, were guests staying overnight at the Rebstock, were a little friendlier perhaps than the norm at a Gasthaus.  Their arms were wrapped around each other and more than the odd kiss was being passed between them.  Only during Fastnacht we said! 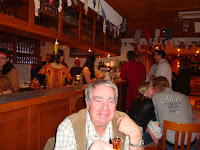 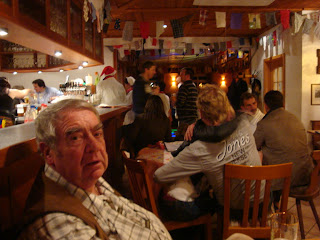 On that particular evening the menu was more restricted than usual, but still with plenty from which to choose.  I had what I nearly always have when I go there, the Zigeuner Schnitzel.  It is a pork Schnitzel without breading and covered in a tomato-based sauce that includes peppercorns, onions and some corn niblets.  It was accompanied by French fries.  Hans had a simpler meal:  Narren Suppe.  In other words, Fools' Soup!  My pictures for both came out too dark to show, but here is a picture of the Schnitzel that I had there last summer, which is what I had this time. 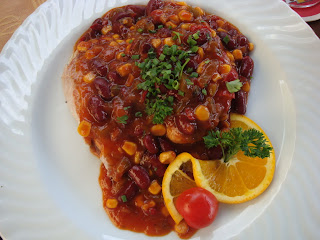 We left for home with the music going strong, the waitresses on the move serving a full Gasthaus of guests and everyone filled with merriment.  It was the start of that last week of Fastnacht with almost a full week of revelry still ahead.

Ash Wednesday:  The Beginning of Lent
The Metzgereigasthof Rebstock is shown below left.  The brothers Kollofrath at right: on the left, the Wirt (innkeeper) of the Gasthaus; on the right, the Metzger (master butcher).  Both work together for special events.  The picture on the right was a large advertisement on the wall inside the Gasthaus. 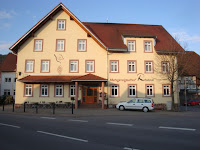 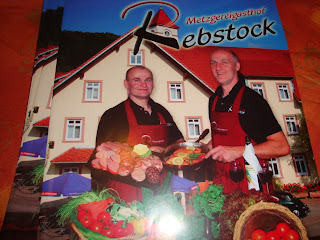 As happens every year on this day, we women join the men the day after Fastnacht ends for a traditional Ash Wednesday lunch.  Last year we met at the Krone in Allmannsweier where the men met every Wednesday.  This year, we met at the Rebstock, the same Gasthaus as on Dirty Thursday.  The Krone is unfortunately now closed as Elli and Peter have retired.  Hans organized the get-together for 14 of us.

Some of the group 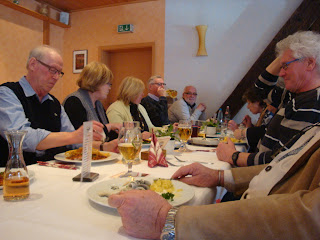 Our long table was in the large back room.  Except for one empty table--it had been set up, so presumably a group hadn't arrived--the entire Gasthaus was full.  This was at 12 noon.  Everyone was there to get over any hangovers from the preceding night and week or just to partake in traditional Ash Wednesday specialties.  Luckily none of us had a hangover.  We were all there to bid adieu to Fastnacht and to greet the onset of Lent.

Today was quiet compared to Dirty Thursday and no doubt much quieter than Rosenmontag, two days previously--the biggest day of celebration.  Stores and banks on that day close for the afternoon, factories close (sometimes for the entire week) and everywhere there are huge parades.  Tuesday, the evening before, ended the big celebrations with "the burning of the witch."  The burning is supposedly to get rid of any wicked spirits before heading into Lent.  Today:  no bands, no dancing children, no decorations and no costumes either.  Time to enjoy getting back to normal with more quiet days in the offing. 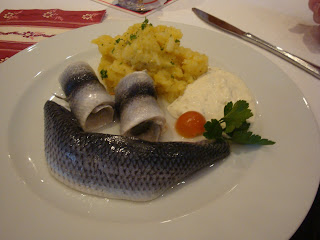 I ordered Zander in Riesling sauce (see below right) with a rice and vegetable accompaniment.  The perch had been poached and were partially rolled and very tender. 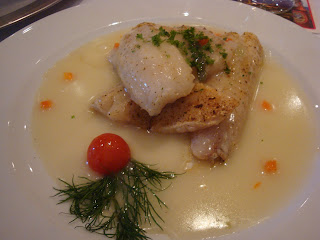 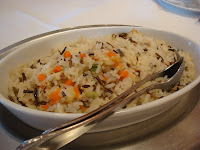 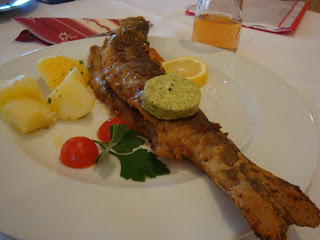 Jürgen, who sat next to me, ordered Forelle Müllerin, one of my favourite fish dishes.  We have special Gasthäuser we go to in the country for fried (or poached) trout.  It is almost time to have it myself!  It is traditionally served with boiled potatoes and with melted butter (as lobster so often is served in Nova Scotia).  On this occasion, they served it with Kräuter butter instead, which is herbed butter (also excellent with steak or pork chops).

Everyone enjoyed the food, the wine and the beer.  I had my usual Weissherbst, which seemed to help suppress my cough.  Something to remember!

Finally, some breathing time for Herr Kollofrath and staff, enjoying their own lunch in mid afternoon.
That, by the way, is the same table Hans and I sat at on Schmutziger Dunschdig. 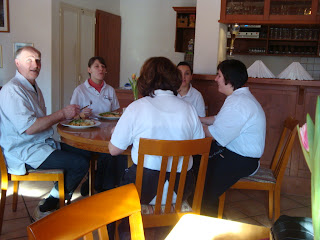 Three and a half hours later we all wandered out to our cars and headed home.  Luckily for us it is just five minutes away.  Although Ash Wednesday ends the noise and merriment of Fastnacht and heralds the beginning of Lent, spring is just around the corner:  with fests, sidewalk cafes and warm weather bringing on the glories of that wonderful season of the year.

Posted by Janet MacDonald at 7:11 AM No comments: