My Nova Scotia Summer: July Brought Family, Friends and Nature at Its Loveliest 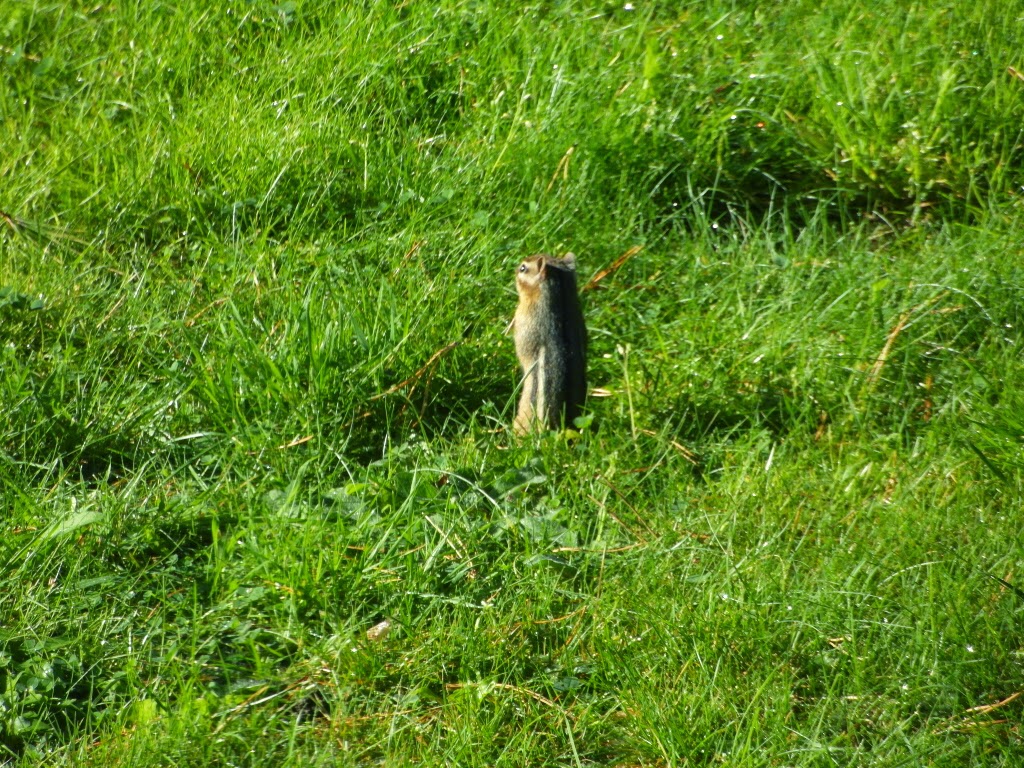 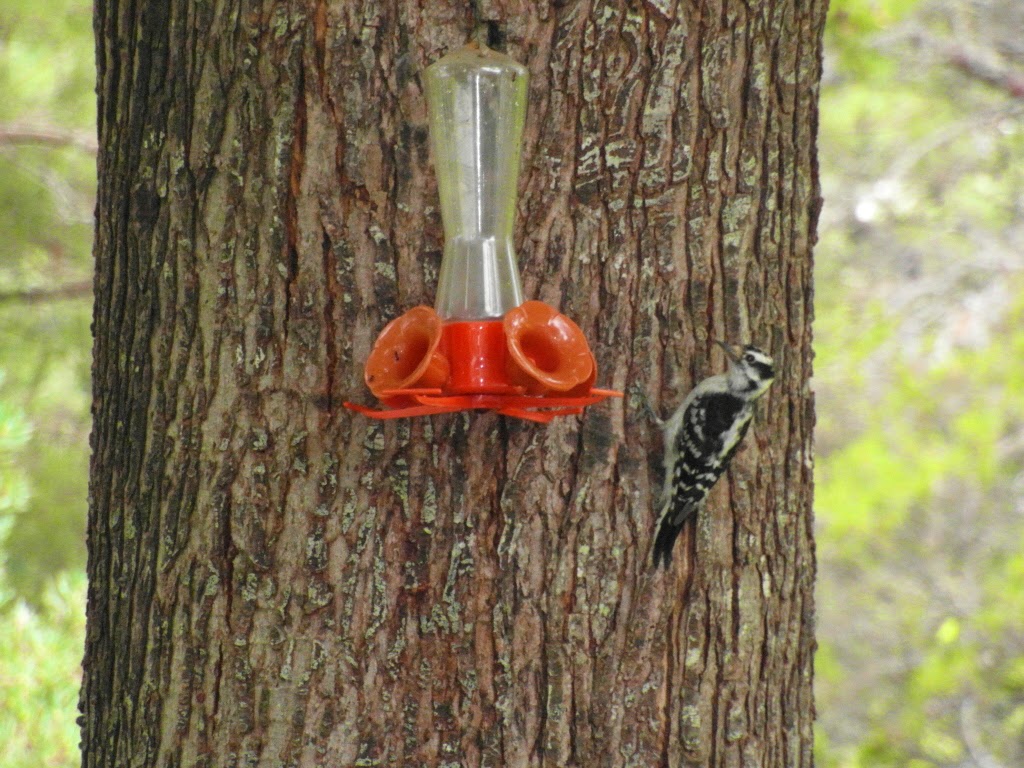 Above left is a Downy Woodpecker about to drink from the humming bird feeder; at the right, a small chipmunk about to come out of his bedroom:  a hole in the ground.  Both of these I watched from our deck.﻿
The lilies below I transplanted from the family cottage in Prince Edward Island to the house in Nova Scotia several years ago.
﻿ 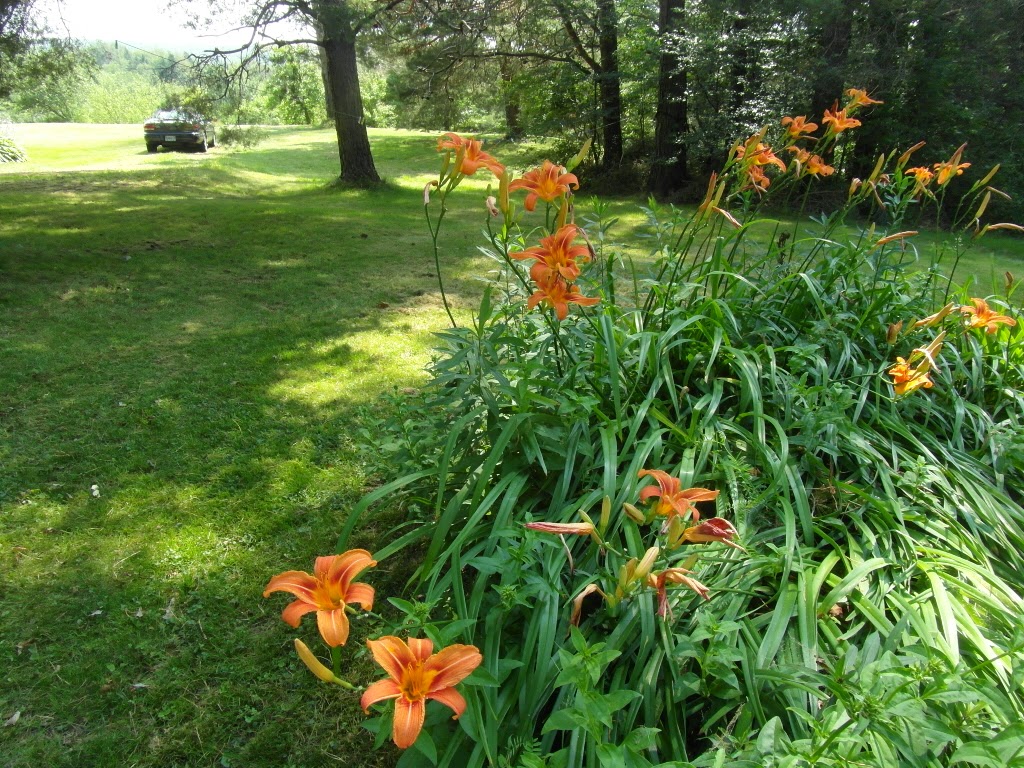 Summer is now officially over and the days of autumn are upon us.  The memories, though, of warm days, visits by family and friends and times together linger on.  This past summer was no different than those earlier years:  so many celebrations, laughter and special days in the sun, ones that will be remembered by us all. 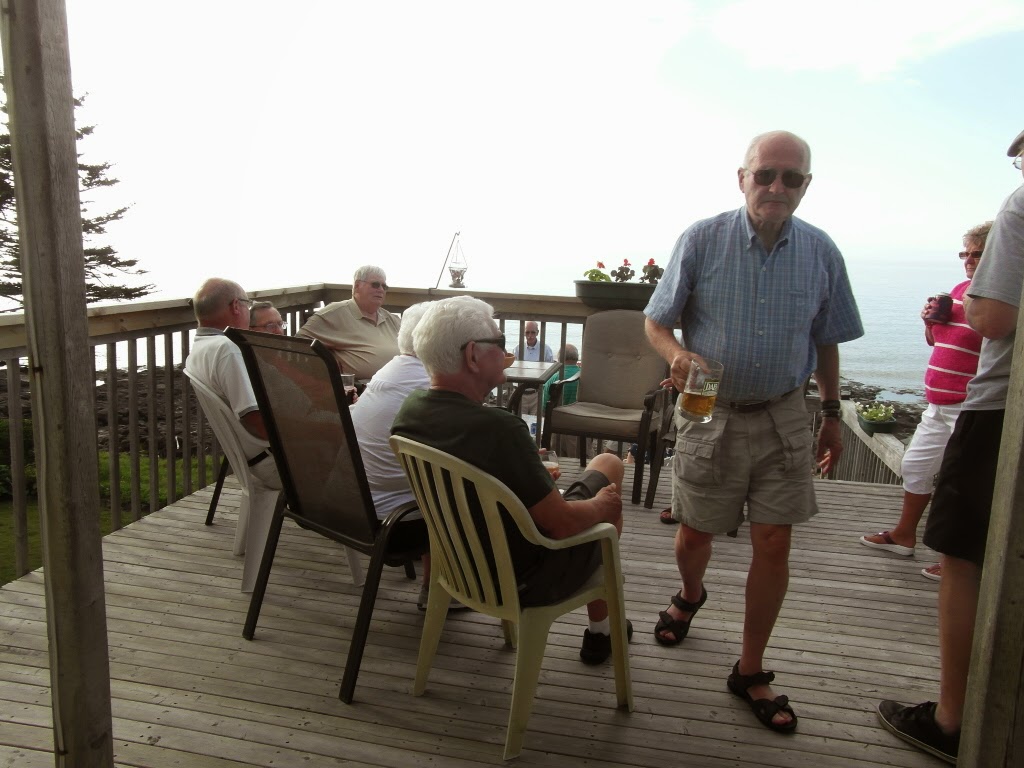 Two days after I arrived in Nova Scotia, the first get-together took place: a Friday TGIF at Mary and Jim's, whose house overlooks the Bay of Fundy.  This was with a group who have gotten together at each other's houses on a late Friday afternoon/early evening for many years.  A hurricane was forecast for the weekend.  That evening, though, the weather was calm and warm.
A few TGIF friends﻿ 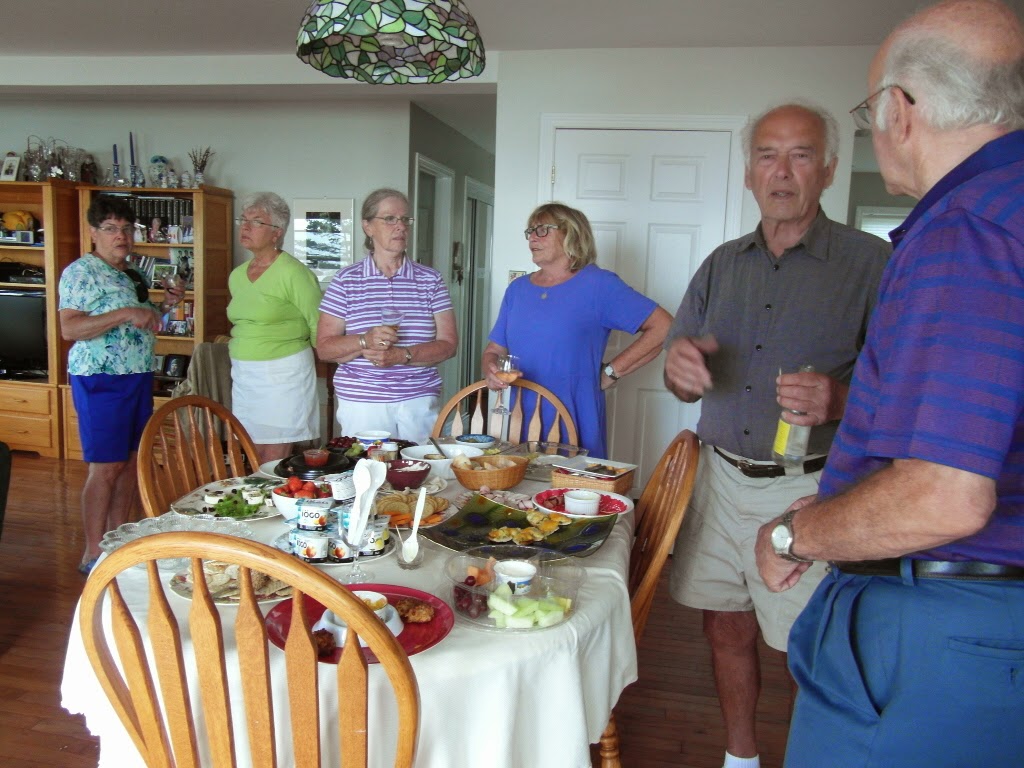 The storm would hit with a vengeance the following day.  That was just three days after I landed in N.S.  The next couple of weeks were spent cleaning up debris outside, mowing the grass which had grown considerably and unpacking things that I had put into bins the previous summer.
I was also organizing removal of several trees, including the one below, which came down in the storm.  It fell between the house and two cars.  Luckily, nothing was damaged.  After that storm, none of us had anything to complain about re the weather as it remained warm and sunny throughout the entire summer.  (Hans, who had been there earlier, had gotten the cars in working order and many other things as well, including the pool.) 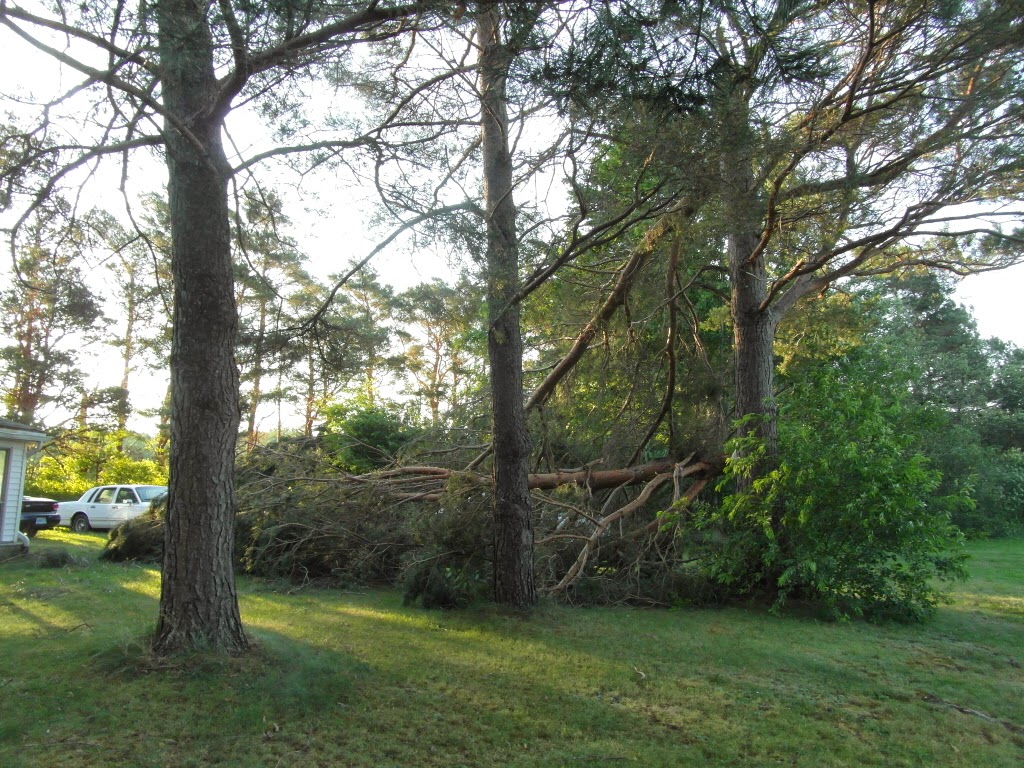 The weekend just before family started arriving I met with German friends, Rosi and Dieter, at the market in Annapolis Royal.  They live in Nürnberg, Germany but spend a month each summer near that oldest town in Canada that is also not far from us. 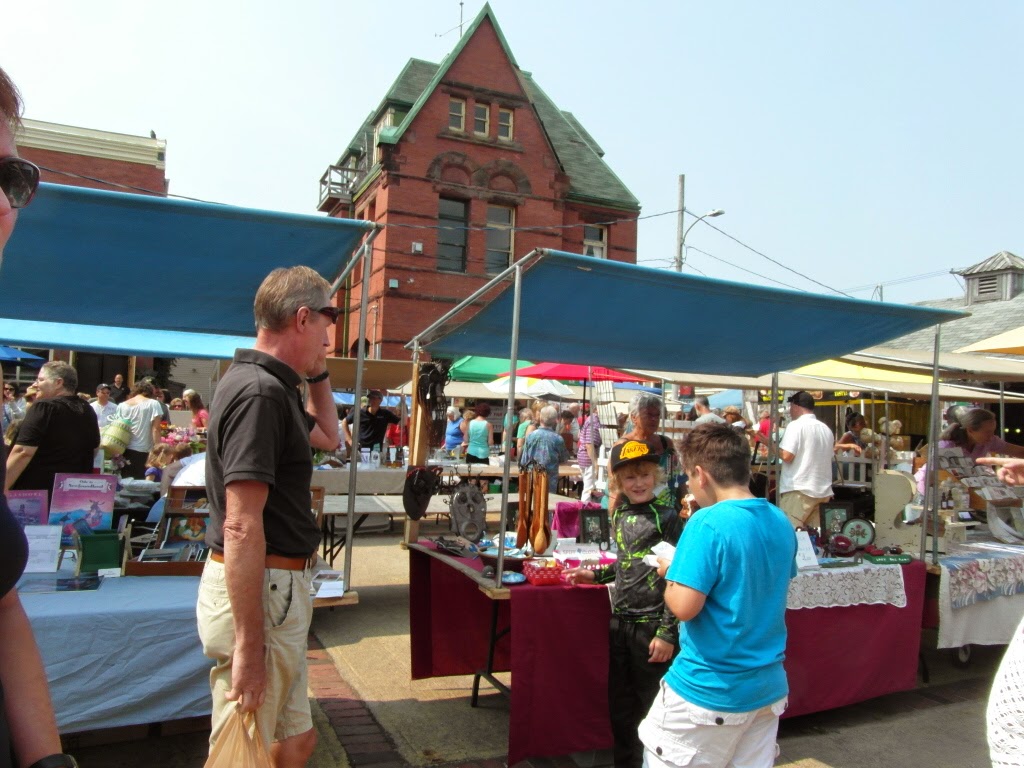 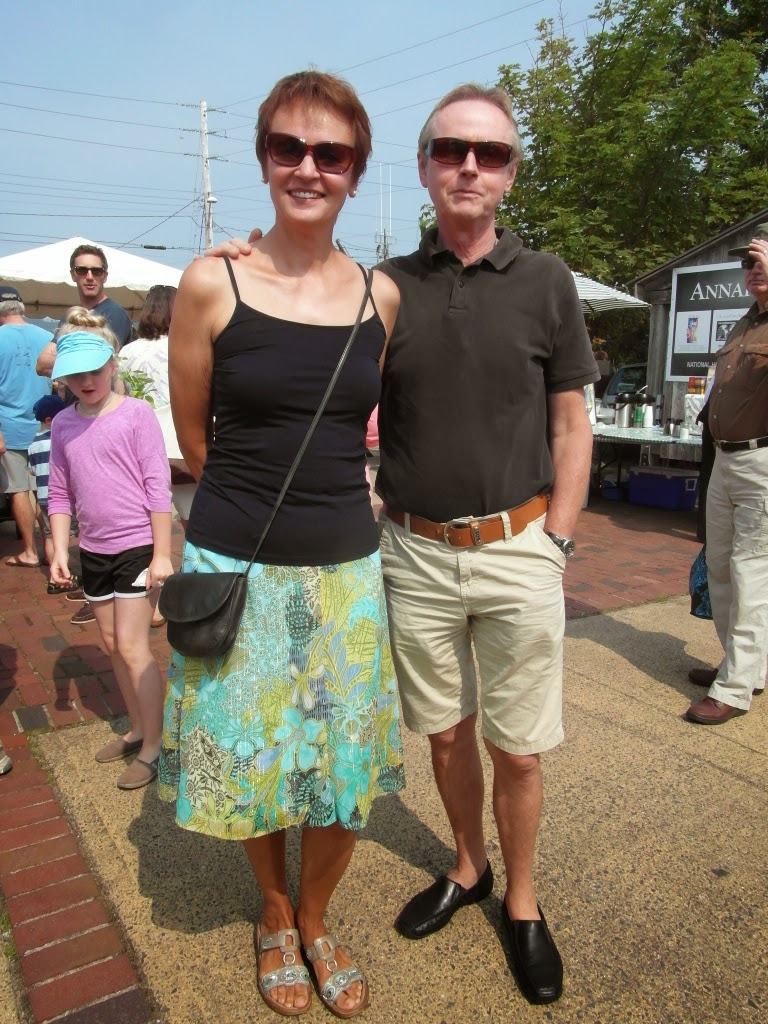 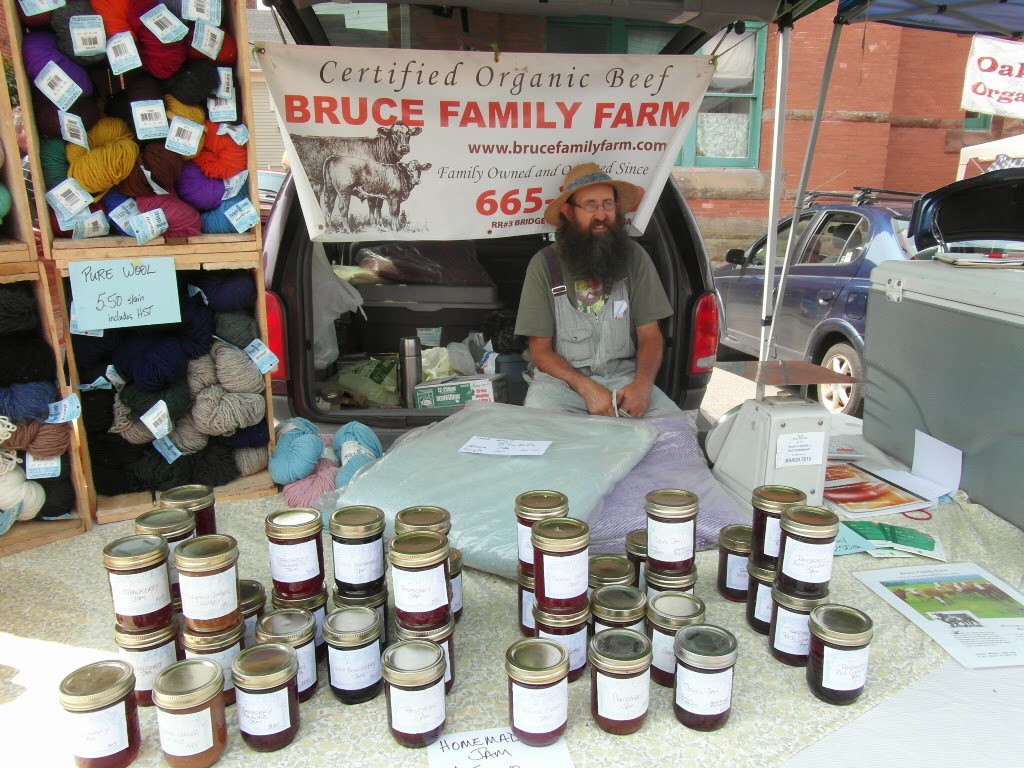 My sister Carol arrived from the U.S.A. at the end of July.  Our sister Anne and her husband, Stephen, arrived from Ontario shortly thereafter.  Thus the family celebrations began, divided between our house and our sister Paula and Laurie's, who live just down the road.  Many special dinners and times together followed with good food, fun and reminiscences.
Left to right:  Janet, Anne, Paula, Carol﻿ 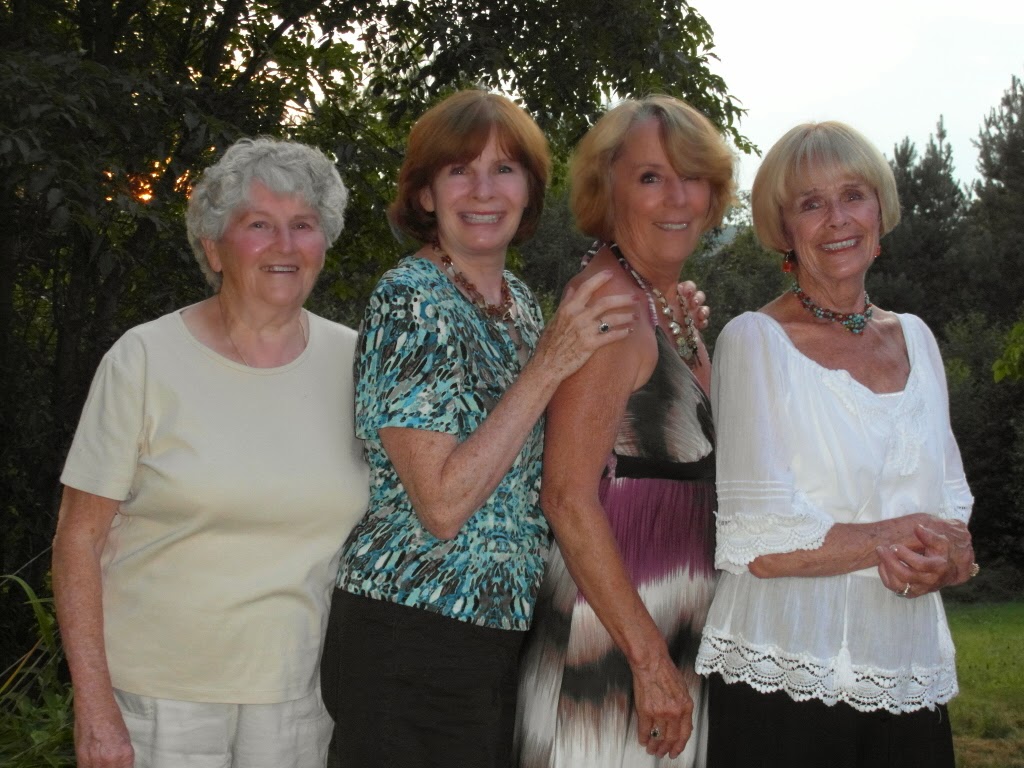 ﻿
I hosted my first dinner after Paula and Laurie arrived home from their cottage in Prince Edward Island.  It was the day our sister Carol also arrived from the States to stay with me. 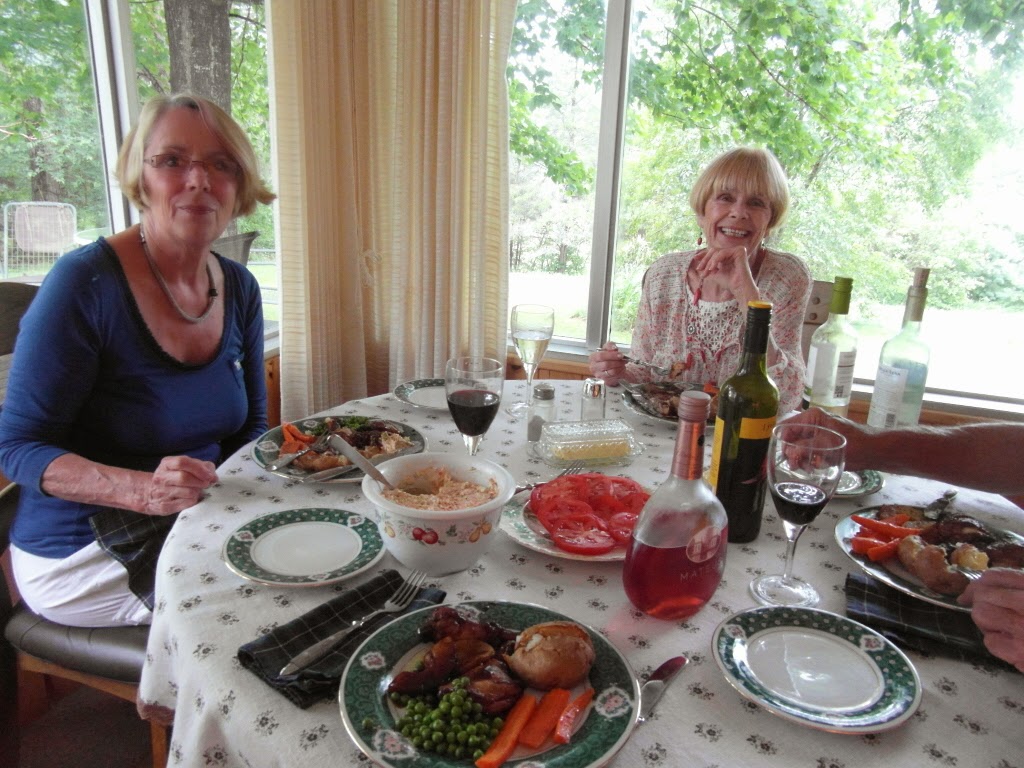 I served Hawaiian chicken, baked potatoes, carrots, peas, cole slaw and tomatoes.  The chicken is a long time favourite recipe, dating back to the 1960s.  Children usually love it (as do I!). 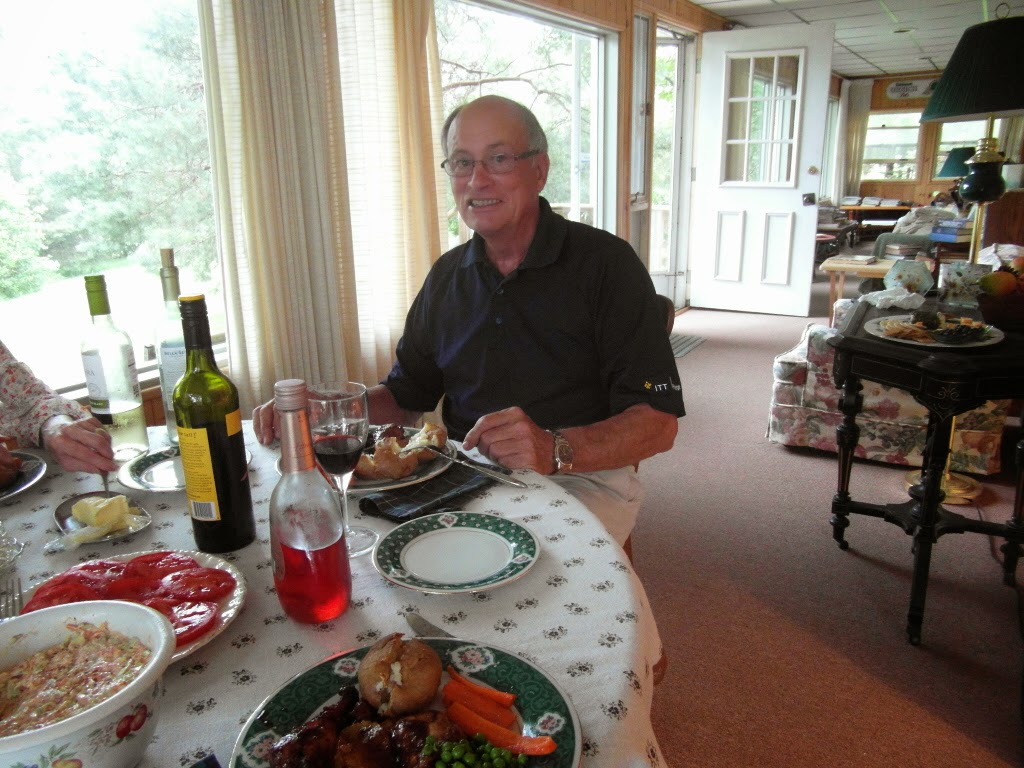 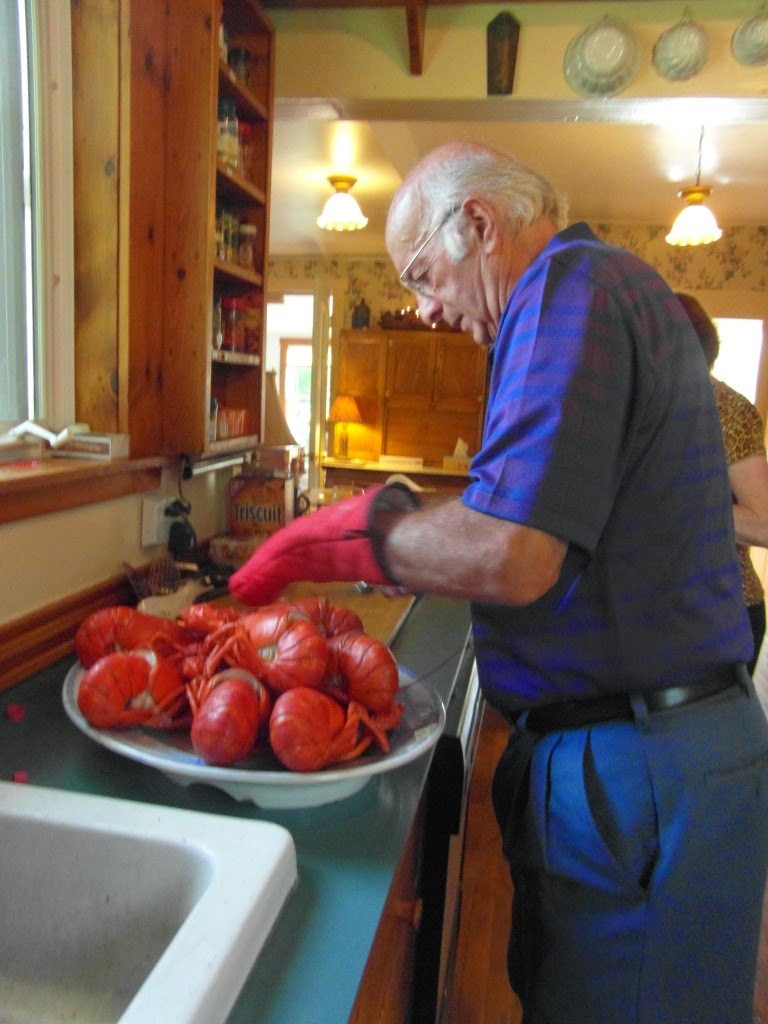 Three days later our friend John Brier hosted a lobster feed at Paula and Laurie's.  Our sister Anne and Stephen had arrived in the meantime to join the rest of us.  That lobster was divine!  It was the only time during the summer that I had a whole lobster. (I did have many lobster rolls and sandwiches.)  What a treat those lobsters were! 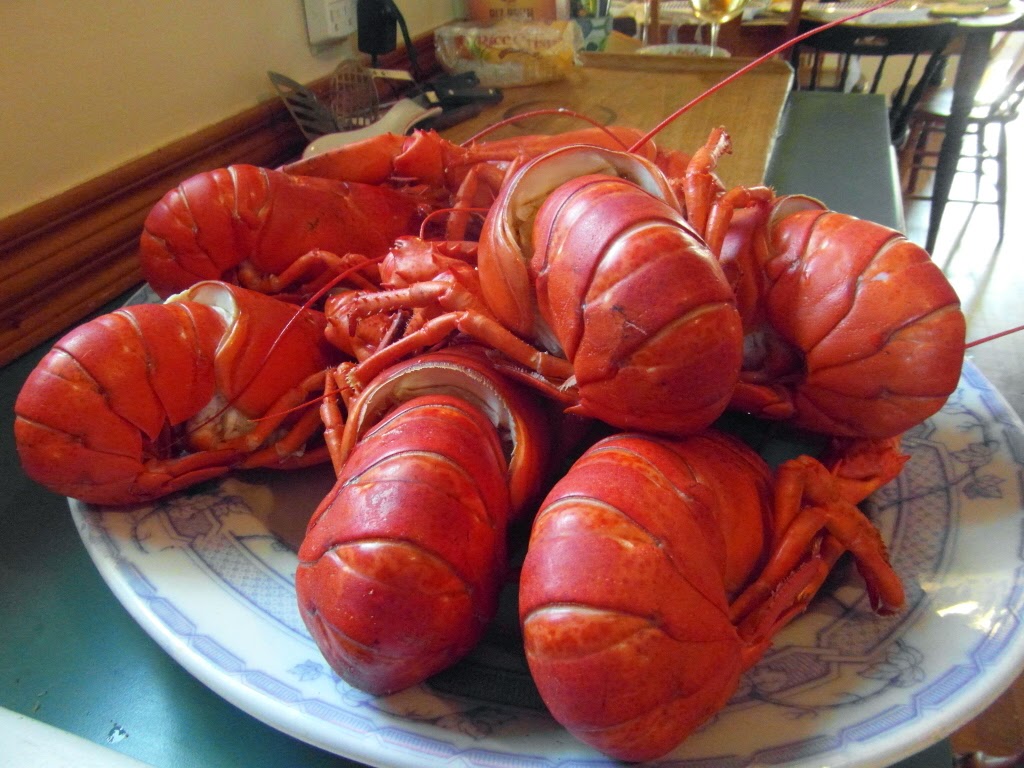 Enjoying drinks on Paula and Laurie's deck prior to the lobster feed (a term used throughout the Maritimes for a lobster night).﻿ 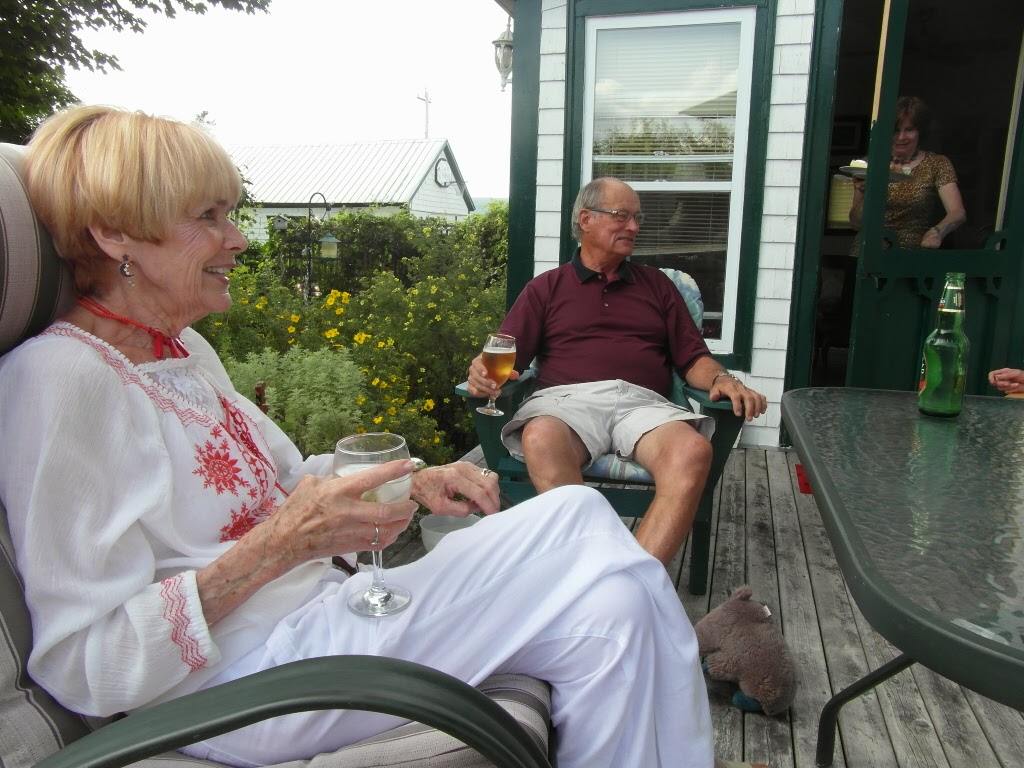 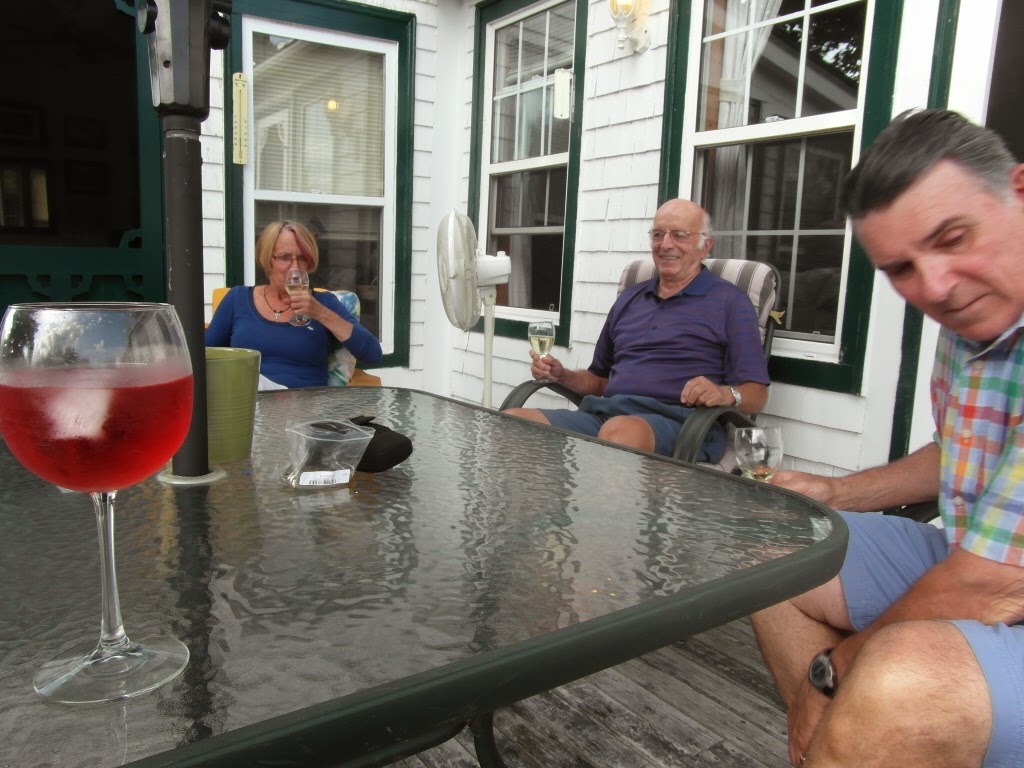 On Friday, 1 August, my sister Carol and I hosted TGIF.  The weather was absolutely perfect, so for most of the evening we all sat out on the deck.  Small conversations started here and there throughout the house as is always the case.
Paul and Ruth in the kitchen having a discussion 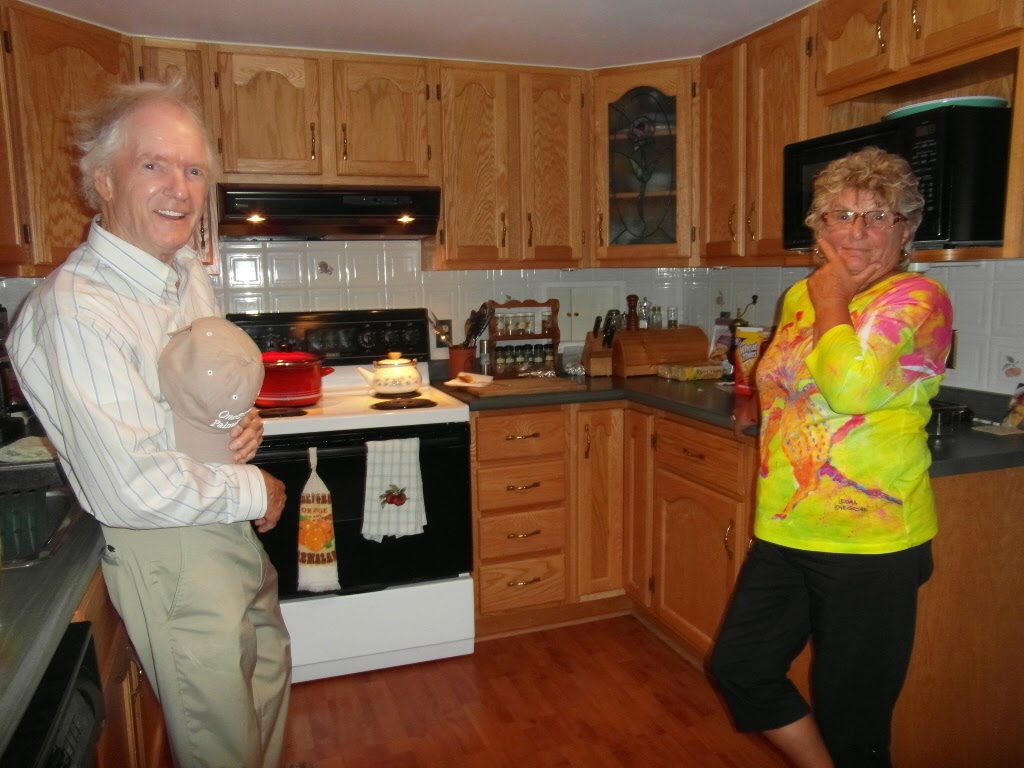 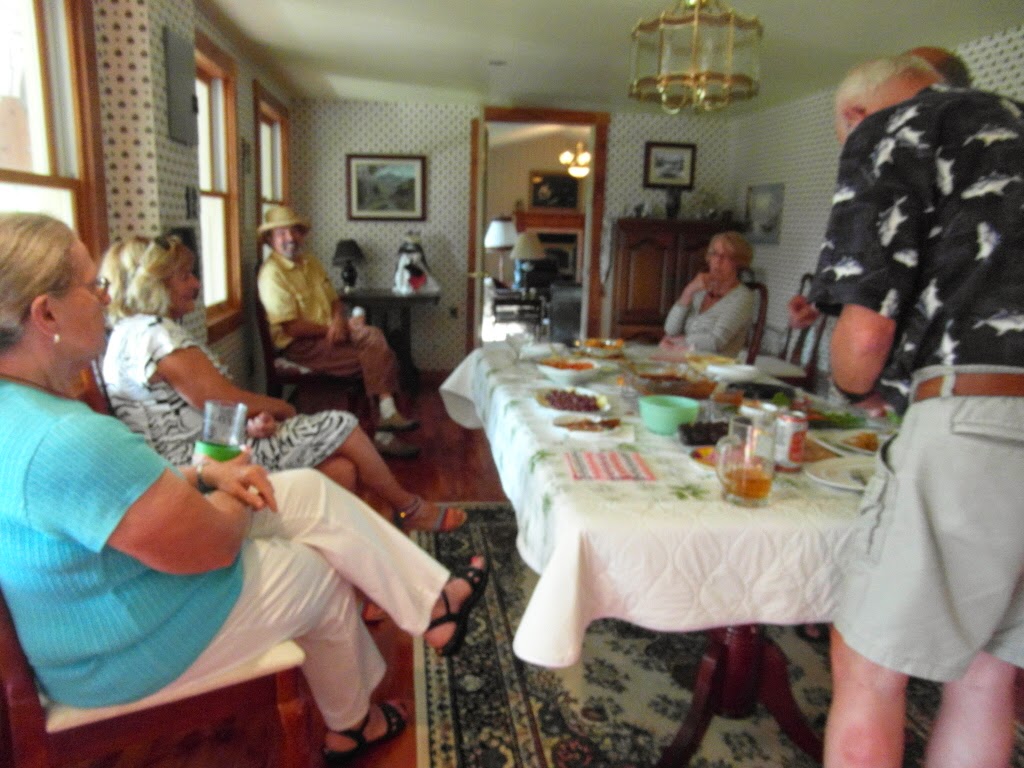 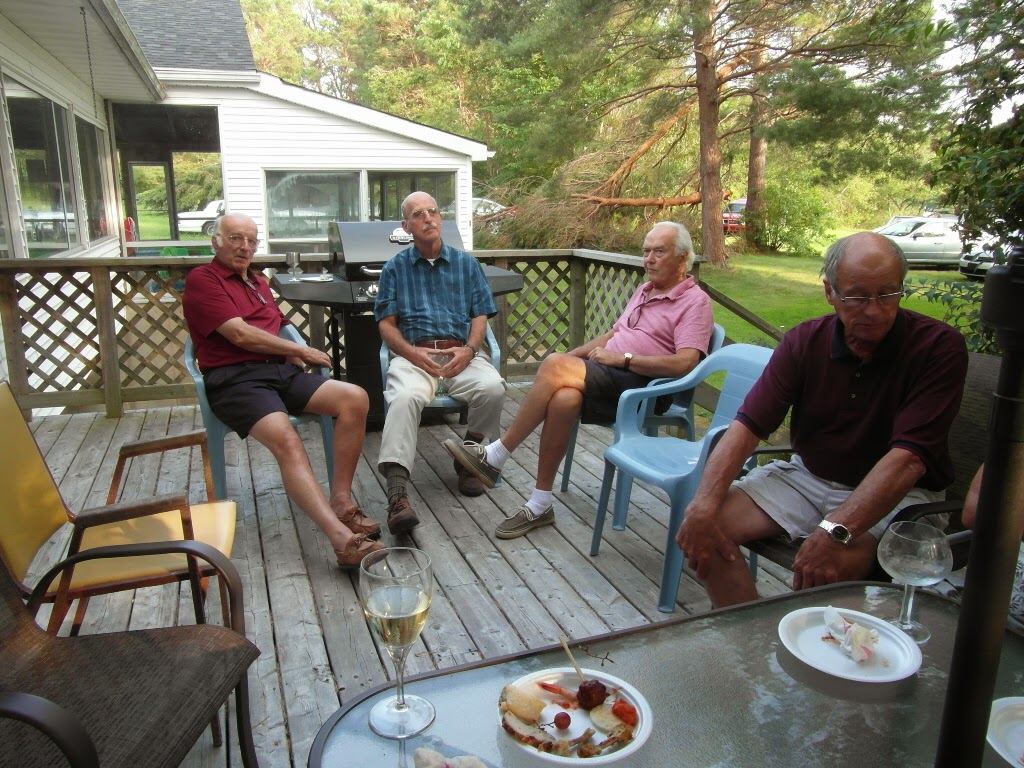 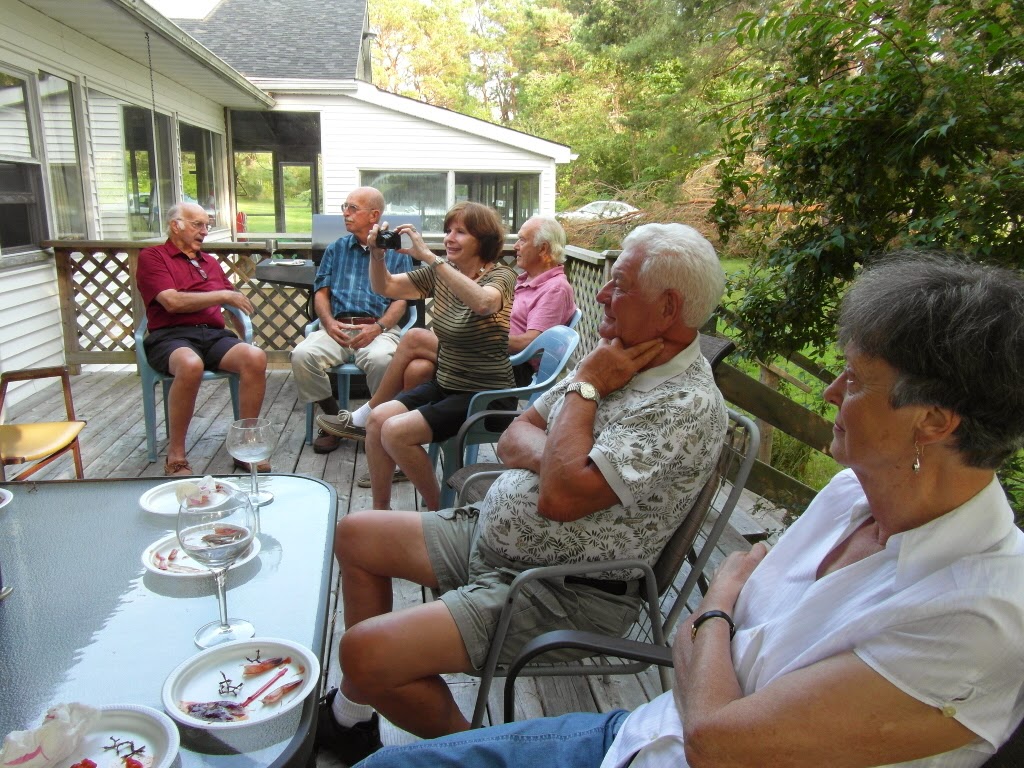 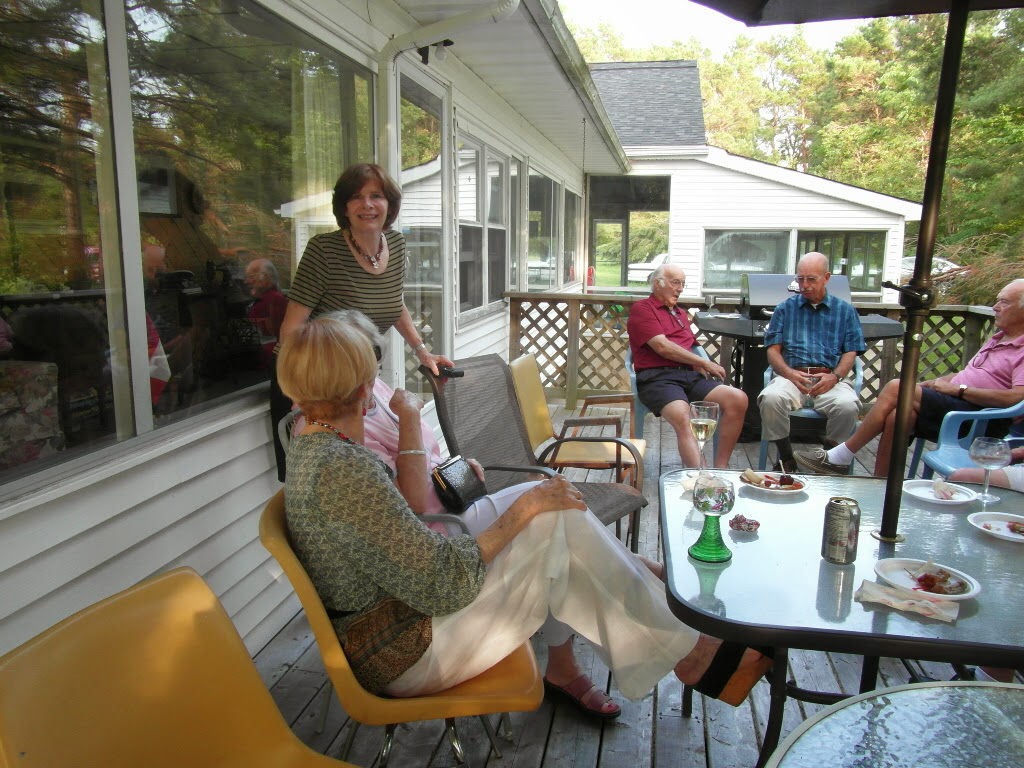 The following evening, on 2nd August, Carol hosted a wonderful dinner at the Falcourt Inn in Nictaux, just 25 minutes or so from Bridgetown.  The food and the ambience were superb.  The "bed and breakfast" still operates there, but unfortunately the restaurant has since closed.  The chef, a military wife, left Nova Scotia for a posting out West with her husband.  The owners have thus far been unable to find a chef to replace her.  Falcourt Inn, a large Victorian-style house, is on Highway 201, not far from Middleton. 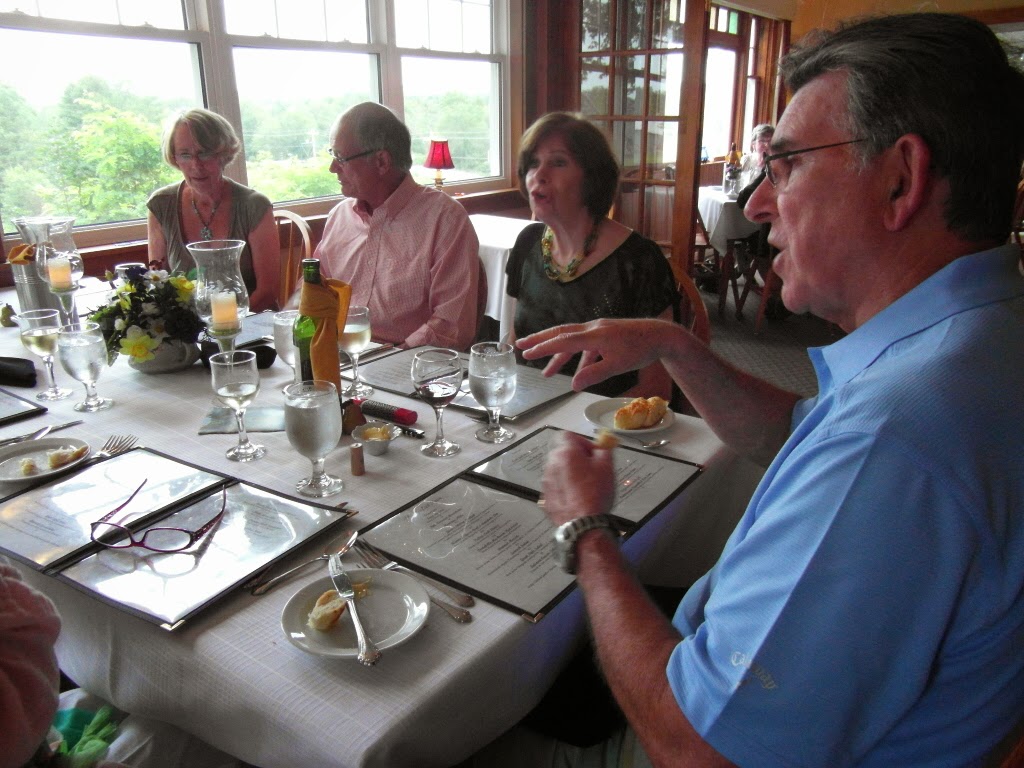 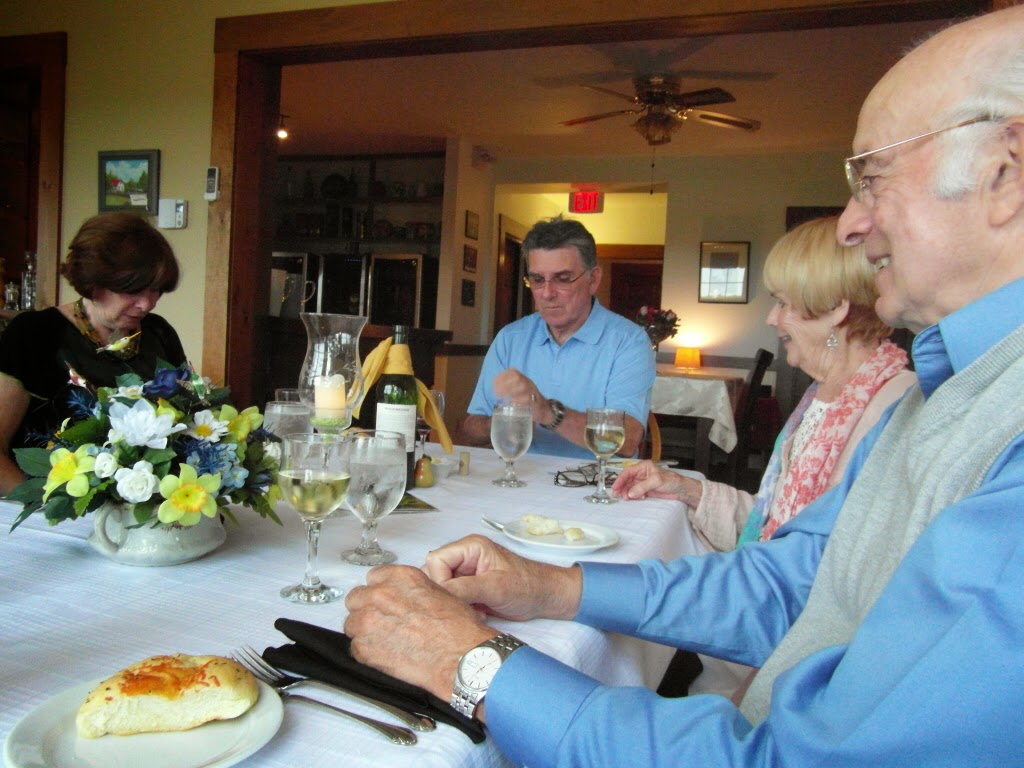 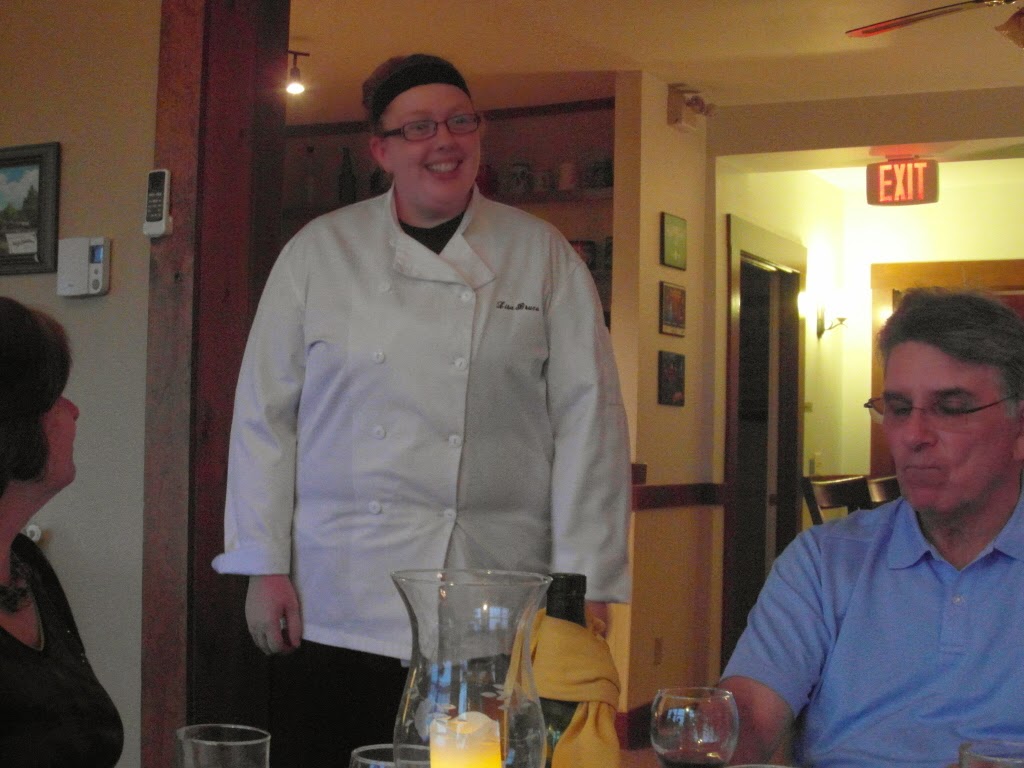 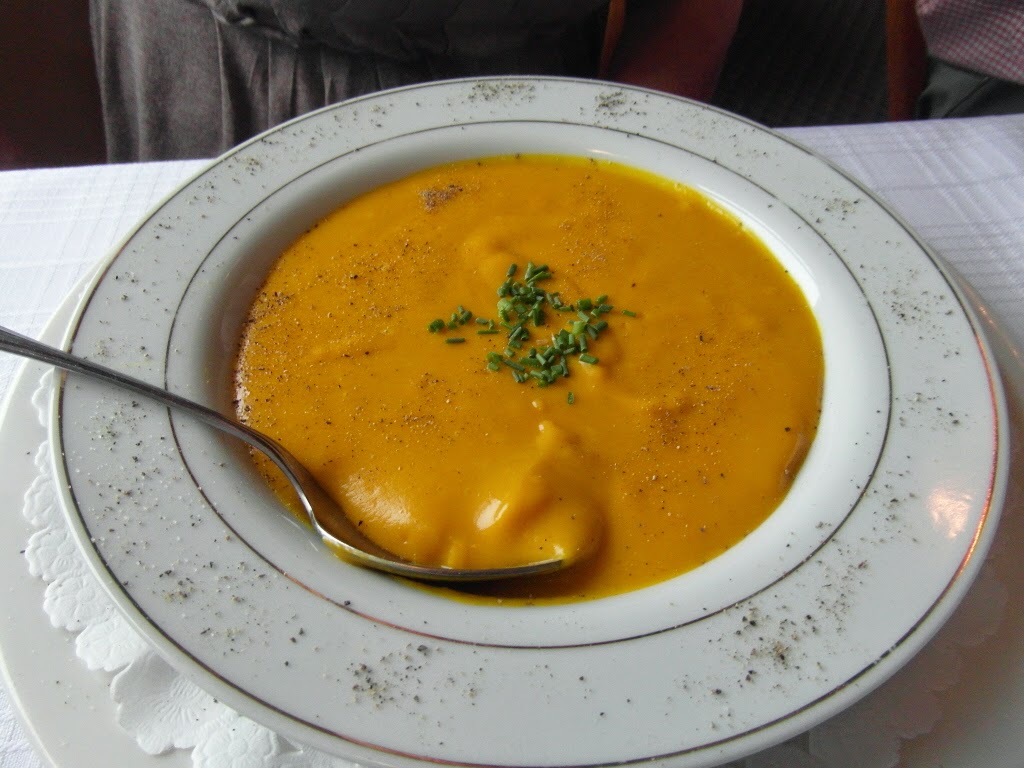 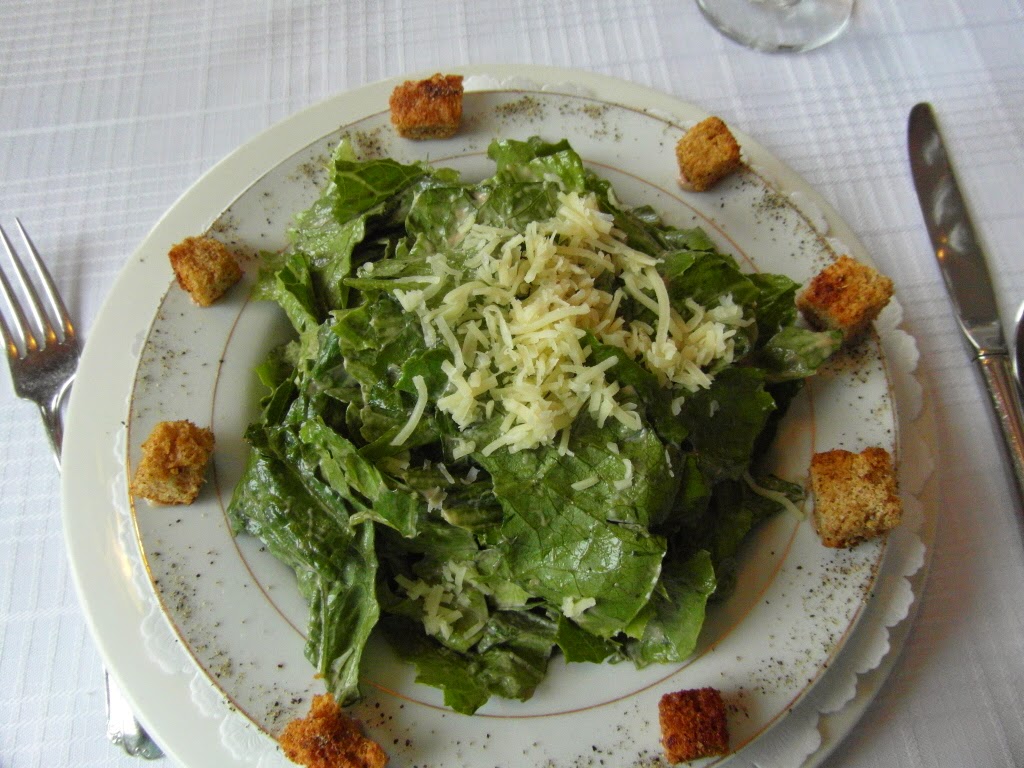 ﻿
My chicken, below, with a raspberry sauce.  This dish was beautifully prepared and cooked. 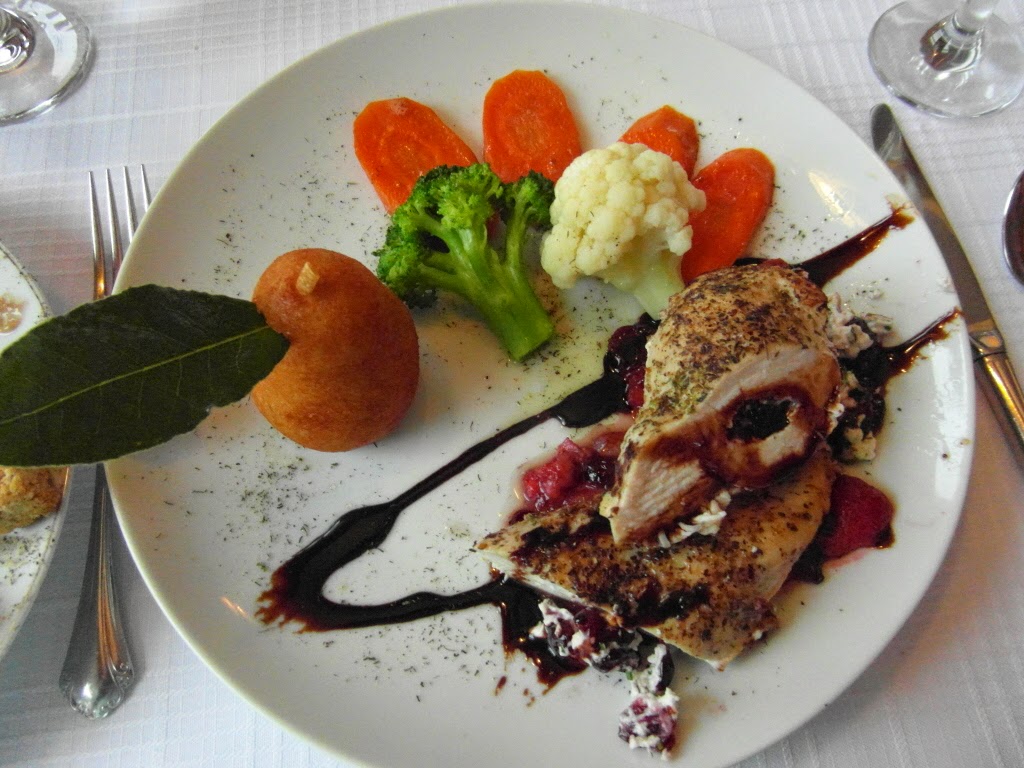 The following dish shows fish with rice on the side.  I was assured that it, too, was excellent. 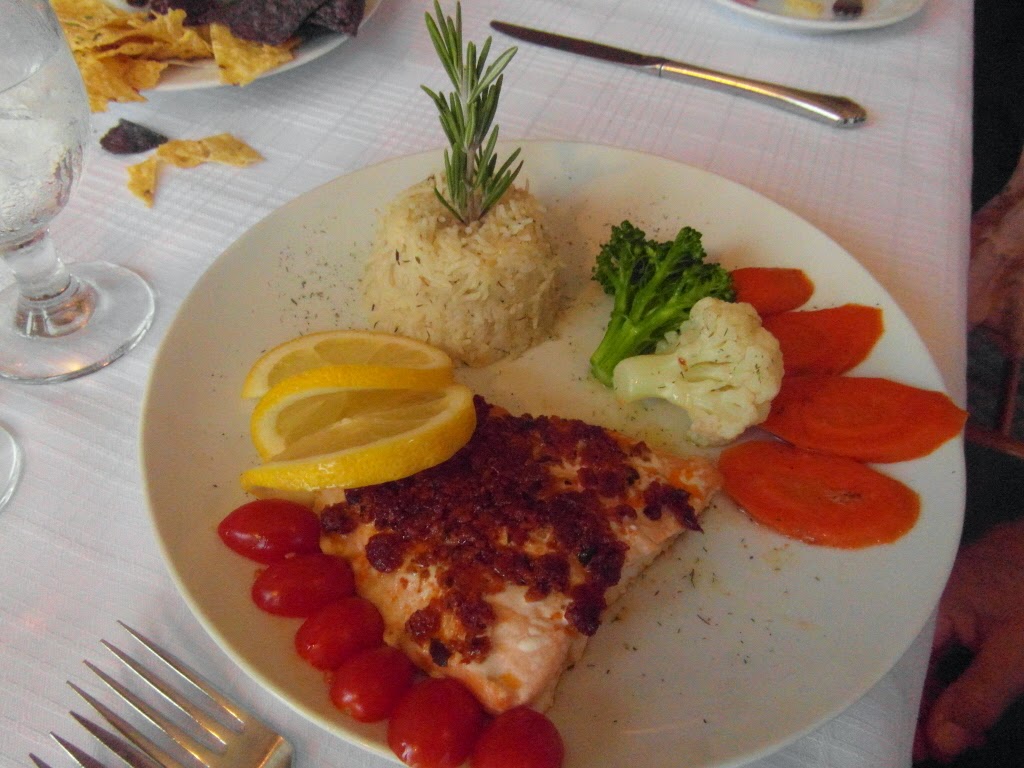 
All of the above took place in the month of July and the first few days of August.  My blog post to come will continue with the remainder of my summer in Nova Scotia.