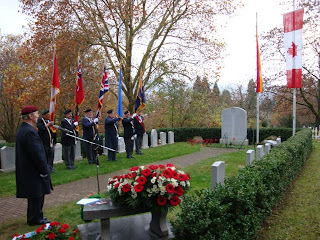 
My blog notes are coming from a village in southwestern Germany, where I live for most of the year. My village is only 25 minutes east of Alsace, France and about an hour north of Basel, Switzerland. This whole area is a wine region, so over the weeks ahead you will note that wine plays a big part in my life and the life around me. Because of the wine, food plays an important part to the life here as well--or, perhaps, it's because of the good food, that wine does!

But today I will talk about Remembrance Day. Last Wednesday, 11 November, my partner and I participated in the Canadian Remembrance Day service in Lahr. The German cemetery is in the heart of this small city and the Canadian cenotaph can be found almost at the top of the cemetery, which is fairly steep and a good climb. The Canadian Legion followed the traditional service with a German band playing the anthems (O Canada, The Queen and the German national) with a bugler playing taps. Wreaths were laid from the city of Lahr, the Legion and the German Canadian Friendship Club. Many of us there placed poppies on the cenotaph and grave markers.
The minute of silence was observed. For me, knowing how many Canadian soldiers have died in the war in Afghanistan made this service especially moving. But I also remembered my great uncle, Alfred Riggs, who died in the Boar War in South Africa in 1902. He was one of three Prince Edward Islanders who were killed in that war. My uncle was 20 years old and a long way from home.
During WWI two Canadian pilots were shot down over Lahr, thus the reason for the cenotaph in Lahr. In this same spot where the cenotaph is are the graves of several Canadian soldiers who died while on duty in Germany with NATO after WWII.

Many Canadians have retired in this area, thus there is a Legion (in fact, two), Canada Haus and the German Canadian Friendship Club. Since Canadian Forces Base Lahr closed in 1994, this service has taken place each year as, of course, it had during the years the military were here.
After the service, many of us joined together at a Gasthaus (inn and eating place) for clam chowder, which has been traditional for years in the military on that day. The Legion president, in fact, made the clam chowder at home and brought it in. Canadians far from Canada but never forgetting our heritage and German nationals joining us, all remembering the fallen and the soldiers on duty today.
Posted by Janet MacDonald at 9:41 AM