After six or more weeks of celebrating Fastnacht, it is quiet everywhere.  Lent has begun and during this period few fests--if any--will go on.  I must add, though, that every year we are surprised to find a fest somewhere.  During this quiet pre-Easter period, in order to keep business going, Gasthauses frequently advertise special meals on the weekends, things such as Schlachtplatte (sauerkraut with sausages) and game--venison or Rot Hirsch (a very large reddish-coloured deer, similar to an elk in size).  Many take their annual holidays at this time--before Easter and the summer season get underway.  (A note:  I have been using the Canadian way of spelling and saying Gasthaus in the plural.  The German word and spelling is "Gasthaeuser.") 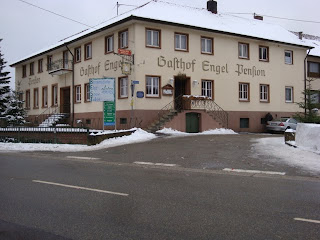 The Gasthof Engel in Doerlinbach at right
It was busy the last week prior to Lent with parades, dances and early-morning closings at various entertainment events.  On the last Sunday we drove to Doerlinbach (a 20 minute-drive) to watch a small, local parade.  It was different from most as it was strictly the town celebrating.  It wasn't fancy, though the town band led it with witches following.  Mothers and children walked along as well.

While awaiting the start of the parade, we sat inside the Gasthaus Engel, where Hans had a Pils and I, a glass of Weissherbst (rose) wine.  Hans says that Uli pours the best Pils (beer) anywhere, though he also says that about the Gruenen Baum in Keppenbach, where Hans had a Vesper recently and I had Steak Madagaskar.  Both Gasthauses take a lot of care in making sure of a perfect head on the beer. 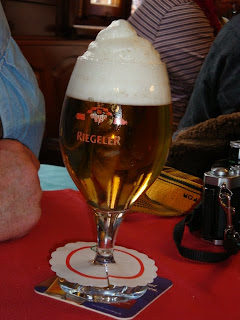 The Engel is a family-run Gasthaus where we know the entire family:  Martin, the chef; Uli, his brother, who looks after the Gasthaus; their mother, Frau Grimm, who ran it with their father for many years; Martin's wife, Monika, who works in the kitchen with Frau Grimm, who still helps, and Martin and Monika's four children.


You'll note that the lettering on the Engel says "Gasthof Engel Pension" while the sign below, which stands outside the Gasthaus, calls it "Gasthaus Engel."  The sign is fairly new.  The word "Engel" means angel. 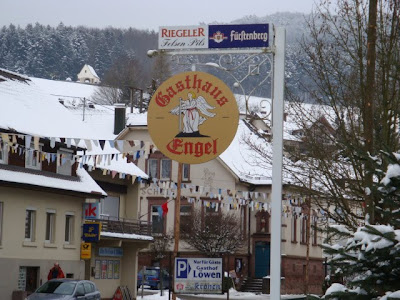 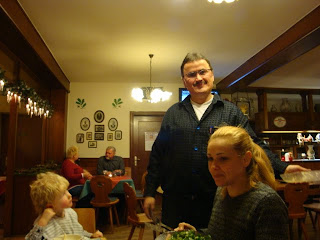 Uli serving our table.  He is proud of his Pils!  We were a group of six.


Martin and I and one of his famous steaks!  That's for another story. 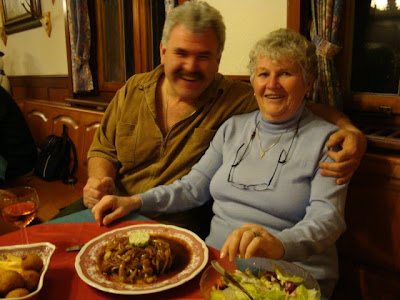 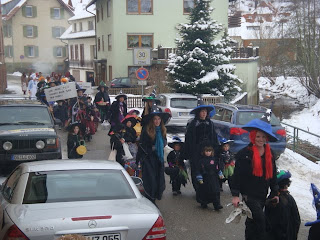 Moms and their children in the parade.
Below right, the band. 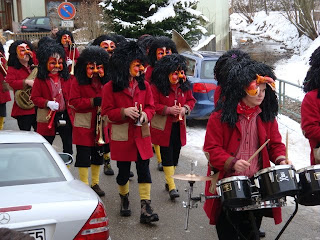 The picture shows a view of the town and the crowd below the church in Doerlinbach. 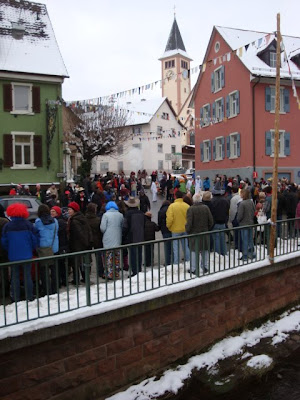 Rosenmontag is always the biggest day of Fastnacht, with parades in many towns and cities, including a large one in Freiburg, 30 minutes south of us.  On that day, stores and businesses close between noon hour and about 2 p.m.  Our bank closes for the entire day.                                                                                In northern Germany, the parades in Mainz, Koeln (Cologne) and Duesseldorf are shown on national TV.  They are colourful, with thousands of onlookers and thousands in the parades as well.  Candy and chocolates are thrown out to the crowds, and Schnaps is offered from the floats in the parade to adults lining the streets (another good reason to go to the parades!).
Fasching or Karneval up north dates back to the 1700s and 1800s.  Here in the south, Fastnacht dates back to the Middle Ages.  Thousands of wrapped candies are tossed to the children in our area.
No pancakes here for Shrove Tuesday as in North America or Great Britain.  Instead, it is more parades and the "burning of the witch" in some towns.  That supposedly gets rid of the evil spirits before Lent.  A huge bonfire of branches is lit, with a "witch" facsimile being thrown in.  Hard to imagine what it was like back in the 1700s and 1800s when that happened to real people in various countries.  Afterwards, everyone heads to the Gasthauses for one final night of revelry.
Aschermittwoch or Ash Wednesday officially ends Fastnacht and begins Lent.  The streets are quiet on that Wednesday, with many nursing their heads I have no doubt and also tired out from all the late nights.
Our group of German and Canadian friends traditionally meet for lunch at the Krone in Allmannsweier on Ash Wednesday, with traditional German Lenten dishes served that day.  Ellie, who runs the Gasthaus with her husband, Peter, is also the cook.  She offered pickled herring in a sour cream sauce and Bohnensuppe (bean soup), both typical dishes at the end of Fastnacht.  She also offered Bockwurst (a big fat sausage that looks like a chubby wiener).
Shown below, Ellie serving some of our group.  Even though she was suffering from a painful toothache, she maintained her usual friendly and pleasant manner and managed to prepare our food as well as ever. 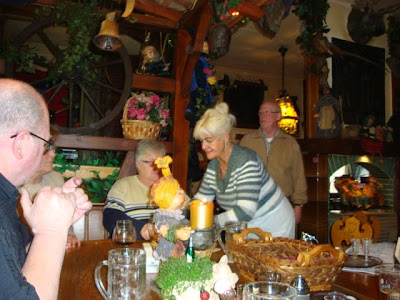 A few other dishes are also traditional, such as Matjes--herring fillets from immature herring.  They are very slightly pickled and salted (almost raw).  They are one of Holland's favourite national fast food snacks.  They can also be bought in Germany, but they are not as popular as the regular pickled herring.
Brathering (fried herring), minus heads, are fried in a batter and then pickled and preserved.  These come in shallow tins in Germany and are available everywhere.
Another favourite is Rollmops, where a cucumber pickel is placed inside a pickled herring fillet, rolled up and held together with toothpicks.
In the old town of Lunenburg in Nova Scotia, settled by Germans in the mid 1700s, herring pieces in a jar with slices of onion, vinegar, pickling spice and a little sugar is known as Solomon Gundy.  This is available in supermarkets in Nova Scotia.
Below, a plate with pickled herring in a sour cream sauce and accompaniments 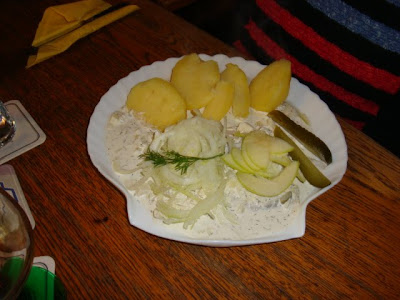 On this past Ash Wednesday, the pickled herring in a sour cream sauce was served with boiled potatoes (Hans says to buy the best you can find, such as Yukon Gold), sliced, raw onions, apple slices and a dill pickle.  The sauce, of course, is important as is using sour cream for it.  Most of our friends ordered this, including Hans, who said it was one of the best he's had.  The reason for eating pickled herring, it is said, is that the salt and vinegar restore the electrolyte salts from over-indulgence the night or nights before!
Below, a bowl of Bohnensuppe (bean soup) with a wiener on top. 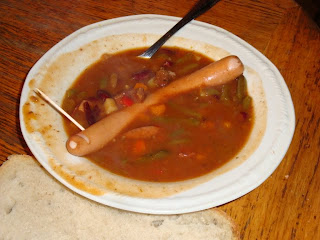 Several ordered the Bohnensuppe, which is served everywhere during Fastnacht and Lent.  It should be hot and well spiced.  It can also include peas and lentils.  The classic is made from fresh vegetables, kidney beans, Speck (pieces of ham) and a beef or vegetable broth.  It is served with a wiener on top of the soup (or sometimes a Bockwurst instead of a wiener).  Fresh hearty bread is served alongside it.
I had neither of the above dishes.  Three of us had the Bockwurst, served with potato salad and Feldsalat.  It, too, was excellent.  See it below. 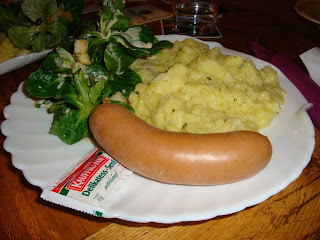 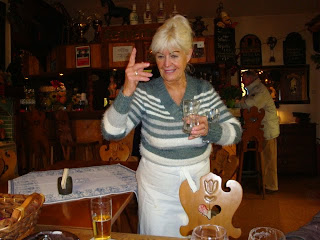 By now, we were paraded out and getting weary, and though we enjoyed it all over the weeks, it was time to settle down with no more celebrating.  There is always a bit of a let-down at the end of Fastnacht for those involved in it, but we are looking forward to Easter, fests and spring.
Posted by Janet MacDonald at 1:08 PM