A Grill Fest at the Gasthaus Kleiner Meierhof 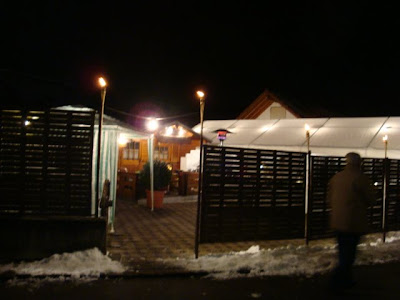 On a Saturday evening in early March we were off to Ettenheimweiler for a Grill Fest at the Gasthaus Kleiner Meierhof.  It was raining and cold, but Erich had set up a huge tent outside and another smaller and open-sided one for grilling.  As I had been suffering from a chest cold for nearly four weeks, we opted to eat inside the Gasthaus.  A few others did as well.  We remained outside for a while, though, to watch Erich at the grill and also to see what was going on in the tent.
Below, getting the grilling started 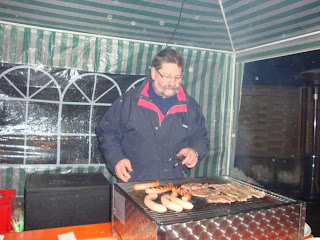 As Erich was doing the cooking, Sylvia had a little more time to do other things.  She made sure everyone had drinks inside and that tables were ready for any new arrivals.  Patrick and Stephanie, their son and daughter, served outside and inside--wherever needed.  Both were kept on the go all evening.  Friends of theirs helped out at the bar.
Below, a view of the outside of the large tent 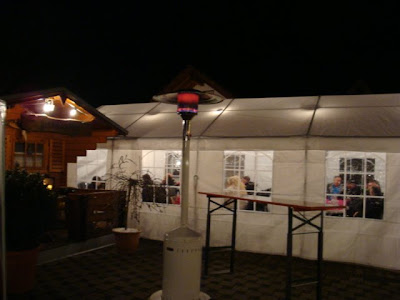 To start our evening, we had a choice of drinks:  I chose the Cremiger Eierpunsch (an egg punch with a punch!) and Hans, the Apfel Punsch (apple punch with Calvados).  Both were very good, but I liked mine best.
My Egg Punch 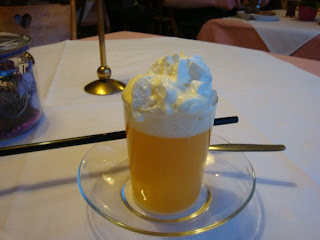 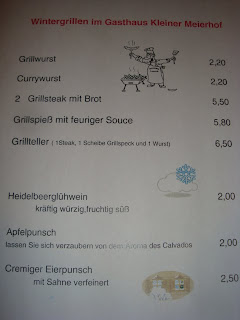 It was then time to choose what we wished to eat.  We had
looked at the menu and at the meats cooking on the grill outside.  Sylvia told us that she and Erich had marinated all the meat overnight.  On offer:  Grillwurst (Wieners), Currywurst (Bratwurst or other type of sausage cut up and covered with a curry/ketchup sauce), Grillsteak (pork), Grillspiess (meat on a spit or as a kabob), and Grillteller.
Hans and I ordered a Grill Teller (grill plate) each, which included one Wiener, one Grill Speck (pork with fat, crisp and tasty) and one pork steak with a spicy sauce.  On the side was fresh farm-type bread.  It was all tender and delicious.
Of course, with the meal, I had my usual Weissherbst (rose wine) and Hans, his usual Pils. 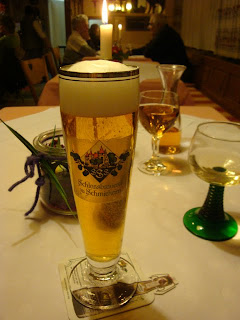 The Stammtisch (regular customers' table) was busy, which we were happy to note as that is an important part of Gasthaus life.  It is one of the mainstays of any Gasthaus and can determine how well the Gasthaus does financially.  Those who frequent that table are favoured customers.  Unfortunately, the Stammtisch is becoming rarer as the young men seldom go these days.  Without new Kunden (regular customers), these tables will eventually disappear as the older men become too old or too frail to go any longer. 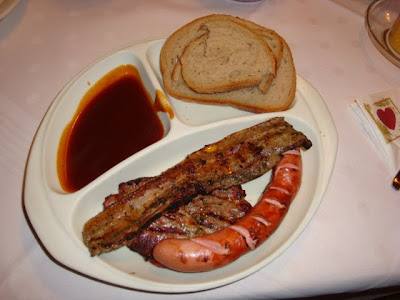 Above, the simple meal Hans and I enjoyed that evening.
Below, the Stammtisch 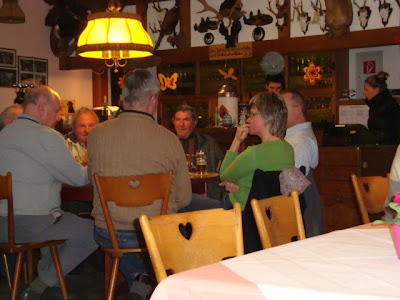 The Stammtische are really meant for the men, as in earlier times--and not that much earlier--only men sat there.  In those days women generally did not work outside the home.  Men worked long hours and would stop for a beer before heading home for Abendbrot (evening meal).  It was a time for them to relax after a hard day, to discuss politics, sports, and the news of the day.  Women sometimes go with their husbands or a male friend, but it isn't common even now.  We have on occasion sat at a couple of Stammtische, including at the Kleiner Meierhof, but I don't feel comfortable doing so, even though the men have always been polite and welcoming.  Hans sometimes joins one when he is out on his own.  If one is not a regular at the Stammtisch, then you must be invited to sit there.
Patrick waiting for his father, Erich, to finish up some grilled meat to be served inside the tent. 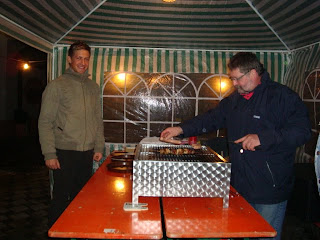 Later in the evening, the grilling was well underway, as the picture shows. 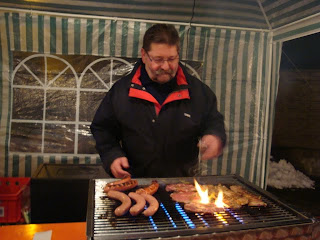 Tonight we enjoyed the atmosphere, our meal and the warmth inside on a cold night.  We talked a little with guests at the next table and with Sylvia when she wasn't busy.
When leaving, we stopped at the tent outside to say goodbye to Erich and looked inside the main tent; the tables were all taken, with perhaps just a few empty seats available.  No one seemed to mind the colder temperature.  They did, however, have two heating units inside so that helped to take the chill off it--as did the wine and beer and good cheer.

Thank you and a handshake before leaving 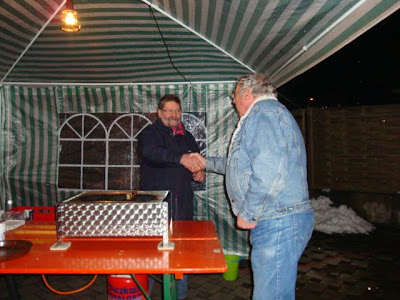 Below, Stephanie at the far left end of the tent, checking to see if anyone needs anything. 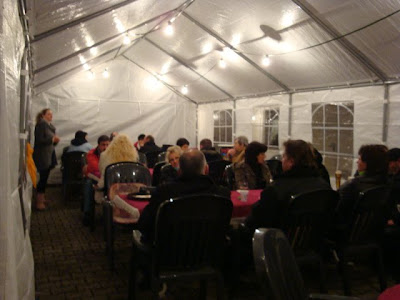 This fest and another one we went to the following day, as well as the Schlachtplatte on the Friday of that same weekend, were held during Lent, a usually quiet period.  We have found, though, that on most weekends during this time frame there are various things taking place.  It is impossible to say, "There's nothing to do!"
The two pictures below I took today in Munchweier, the small town near us.
Daffodils and forsythia in bloom 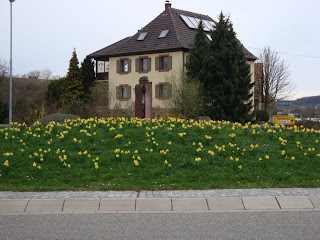 As I write, the weather has warmed up.  Before long, everything will be in full bloom.  Spring has been later than usual this year, although the daffodils and forsythia in their lovely spring yellow are in bloom, with many other flowers about ready to burst forth.  In another month, asparagus and strawberries will be in season.  Farmers are in their fields and vintners are in their vineyards making up for lost time.  Spring has arrived. 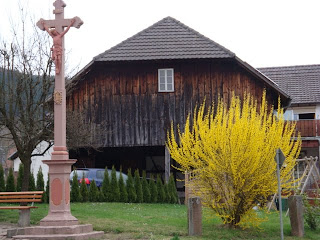 Posted by Janet MacDonald at 11:44 AM