Beer and Its Brewing Process--Part Two

We arrived at the Löwenbrauerei at 9 o'clock in the morning.  We had arranged with Johannes Dold, the owner and brew master, to have a tour of his brewery.  By then, the brewing had been in process for about three hours.  Herr Dold met us and spent the next hour showing us and explaining to us how they brew their beer and about some of the complicated machinery they use. 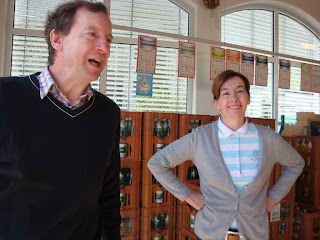 This is an old family brewery, dating back to 1856.  The picture below right is from an early era, with the brewery Gasthaus on the upper, right side of the picture. 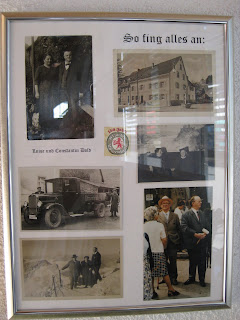 As mentioned in my last post, this brewery has remained in the same family for all 154 years and has won many prizes for their various beers over many of those years.  I will briefly explain the brewing method and though it may sound relatively simple, in fact it takes a lot of expertise and experience.

1.  The beer brewing process begins in the brewing kettle, where barley malt is combined with water.  It is then heated to various temperature stages in order to break down the starch enzymes. 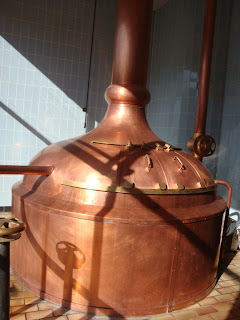 Below, right, it shows the brewing  inside the kettle.  It will remain here for about four hours. 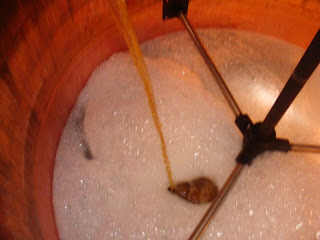 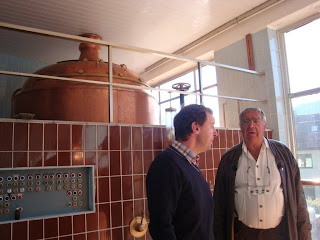 2.  After that process is completed, hops is added; in the case of the Löwenbrauerei, the traditional female hop cones are still added by hand in the proper proportions for different types of beer.  (Herr Dold does not use hop pellets, which are more commonly used in larger commercial breweries.)  It is then boiled for a specific time frame determined by the brew master. 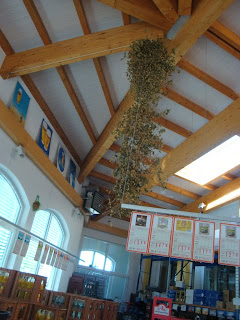 Pictures of hops(decoration) hanging from the ceiling inside the retail store. 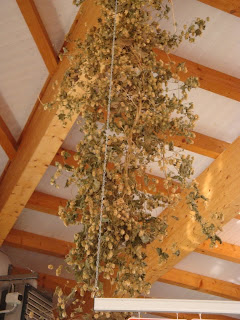 3.  After the brew master determines it is ready (it can take up to eight hours), the liquid is separated from the solids and cooled off.  That liquid is then transferred to large primary fermentation vats or vessels where the yeast is added, yeast being specific to two primary yeast types:  aerobic for top fermenting beers, such as ales and wheat beer; anaerobic for bottom fermenting beers, such as Pils and Export (in English, those are referred to as lager beers).


A picture of the primary fermenting vat, showing 4,050 liters of Export (lager beer) 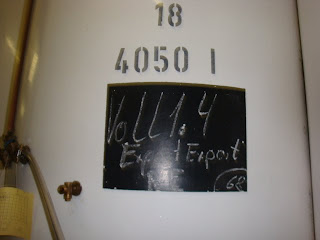 4.  After primary fermentation is completed (normally seven to eight days), the beer is then transferred into large--now generally stainless steel--tanks for the final fermentation process for a period of six to eight weeks.  This takes place at a very low temperature, about 2 Grad.  Aging at this low temperature allows the carbon dioxide to combine with the beer.   In the Elzacher Löwenbrauerei, as in most small breweries in Germany, natural carbonation takes place in the above fermenting process.  Excess carbon dioxide is released to the ambient air through pressure valves.


Below, pictures of the final fermenting lager vats 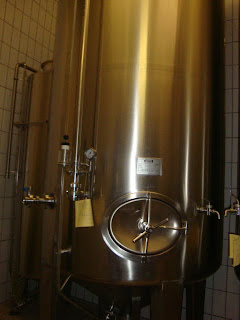 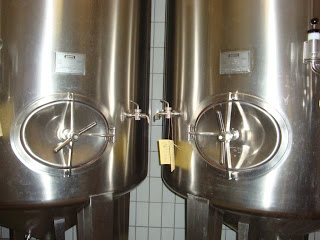 5.  After the maturing process is completed, the brew master will then filter the beer.  Pasteurization as practiced in North America is normally not done in Germany as the pasteurizing process removes much of the typical beer flavour and aroma.

6.  After filtration, beer is then bottled or put into kegs as required.

Below, the cases of bottles on the right; the kegs shown are now used for special occasions, such as festivals. The modern stainless steel "keg" type is now utilized. 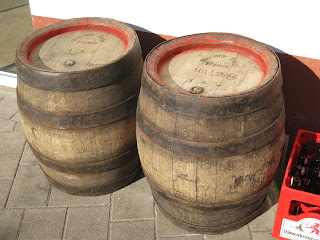 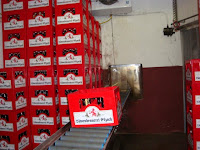 
This is a simplified version of a complex beer brewing process, which starts with the malting of the brewing barley.


Below, a glass filled with barley, along with one of  the Löwenbrauerei's various types of beer glasses 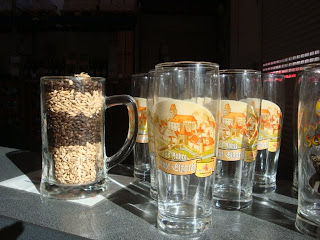 
A case of Weizen beer is shown below in the fermenting stage in the bottles.  Note the guage at the back 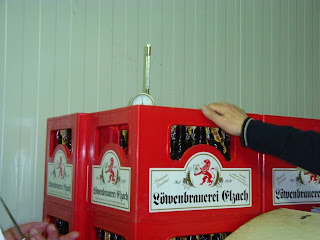 Germany is rightfully proud of still adhering (by law) to the oldest food regulation in the world.  That is the Reinheitsgebot (purity law), which was passed by Herzog (Count) William IV in 1516 in Bayern (Bavaria).  The reason the count passed this law was that he was thoroughly fed up with drinking the often abominable brew that was offered to the nobility but also to the general public at that time.  The fine for brewers who did not adhere to the new law was that they had to drink 10 liters of their own beer (or swill!) in one sitting! A punishment that brought the point home!

The Reinheitsgebot law stipulates that beer can only be made from three ingredients:  water, barley malt and hops.  Yeast, of course, must be used to start fermentation.  As that had not been discovered at that time (1516), the fermentation process then had to depend on natural wild yeast which is found in ambient air. 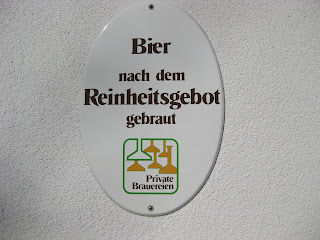 In later years, wheat malt was also permitted but never any rice or cereal grain malt as frequently used in North America.  Also, the common usage of invert sugar in North America is verboten (forbidden) in Germany.  Herr Dold's hops come mostly  from Bavaria and his malt from Lahr.  As a matter of fact, the Lahr malt plant is one of the few in Baden-Württemberg.  For those of you who are familiar with Lahr, the malt is produced in the large brick building near the Bahnhof (train station).

A Gasthaus usually carries the beers of only one brewery, which means that if you are a beer drinker, you will probably check for the beer sign outside the Gasthaus in order to see if it's a beer you like--or perhaps if it's one you have never tasted and wish to try.  When we are in an area of Germany not our own, Hans does just that.  Small private breweries don't ship outside their own area, and it's a chance to try another beer:  a new taste and a new experience as a beer drinker! 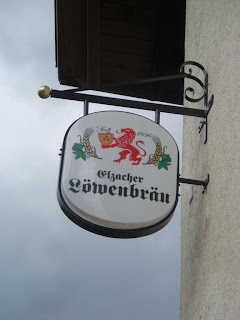 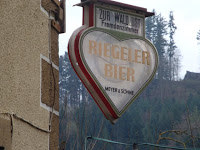 At left,  a rare pre-second- world-war brewery Gasthaus sign seen in our immediate area at the Gasthaus Waldlust.

The picture on the right does not show the name of the Gasthaus Pflug, but it does show the Elzacher Löwenbräu that it serves inside. 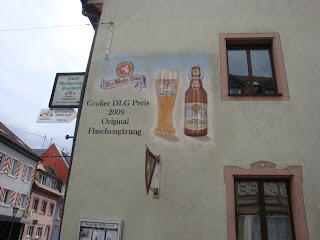 The plaque below is attached to the side of that same Gasthaus. 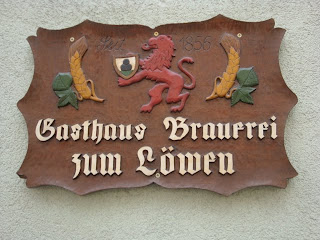 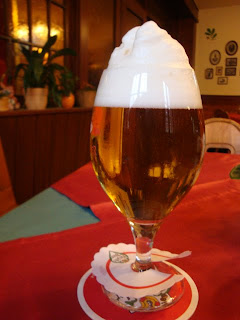 Both Hans and I took the pictures in my two blog posts on beer.  As well, all of the expertise is from Hans and from Herr Dold, both of whom I thank.

Posted by Janet MacDonald at 12:36 AM