All About Buletten: A Berlin Specialty 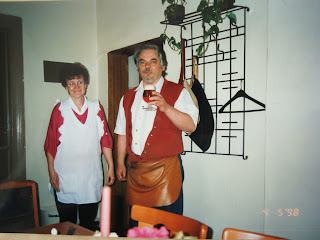 On one of our early visits to Joachimstal, Hans' home town, we stopped at the Bahnhof Gasthaus (Train Station Gasthaus) at noon and joined the regular clientele for dinner.  The place was small and every table was full except for one.  We were lucky.  The Wirt (innkeeper) poured and served the beer, served the food and kept the place going.  From where we sat we could see part of the kitchen.  No fancy counters there, but good home-cooked food was being prepared by a woman who enjoyed her work.

At left, Herr Herfurth, the Wirt, and his lady cook.  This picture is from 1998 on one of our later trips.

We each ordered the Buletten, which until then I had never eaten nor had I heard the name, but Hans knew them well.  Ground meat patties, they came that day accompanied by hot red cabbage and boiled potatoes, along with a delicious homemade gravy.  It was the kind of meal where you would like to lick the plate clean, as a child might before he is caught!  The Gasthaus always served Buletten on Wednesday, so every time we made that trip--and we made it many times over the years--that is where we ate at noon and that is what we ordered.  Unfortunately, the Gasthaus was closed when we were last there.  (Potatoes from that area, by the way, are the best you can get, as good as Prince Edward Island potatoes from years gone by.)

Buletten look similar to hamburgers, but that is where the similarity ends.  They are made from lean ground beef and ground pork and formed into patties the same way, although they are more rounded and thicker.  It is one of my favourite dinners and one that we have at home--or elsewhere--several times a year.  It is not a meal one will usually find in a higher-clss restaurant in Germany, just as you would not normally find meat loaf or shepherd's pie in a gourmet restaurant in North America--or hamburgers either, for that matter.  You would have to go to a pub or diner for those dishes.  You could call all of them, "comfort food."

Below, guests for dinner at our house:  Monika and Adolf along with Hans 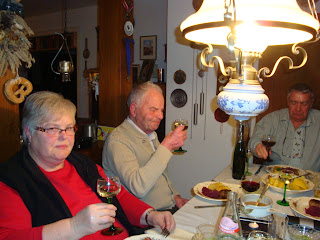 Our meal included Buletten, boiled potatoes, red cabbage and cucumber salad.  We served both white and red wine.  (The white was actually served with the first course, which was Schneckensuppe, a Baden specialty (escargot/snail soup).

The picture below shows the same table. The six of us are incognito. 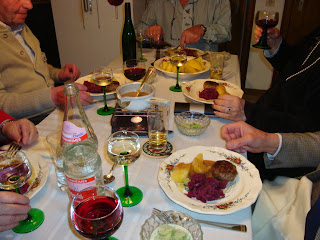 We have served that same meal to guests at a dinner party both here and in Nova Scotia and everyone has enjoyed it.  The red cabbage goes especially well with the Buletten, along with either boiled or mashed potatoes.  A great accompaniment with the meal, though not always served everywhere, is cucumber salad.  We always have it at home with this dinner as it adds contrast in taste and colour and is easy and quick to prepare as well.  We also really like it!
Last summer, before Hans returned to Germany from Nova Scotia, he made this dinner for my sister Paula and brother-in-law Laurie.  Paula asked for the recipe in order to serve it at a dinner party of theirs.  She said it was a huge success--but a lot of work!  It does take some time, but much can be prepared ahead, including the red cabbage and the Buletten.  When I said it was simple food, one would not expect to serve that at a dinner party; however, it is so delicious that it's a great main course anytime.

After the meal is finished and enjoying the wine and conversation:  Paula, Laurie and Mary 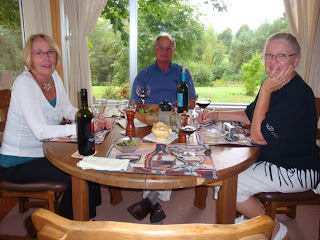 The above dinner I hosted in N.S. after my arrival. 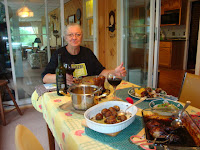 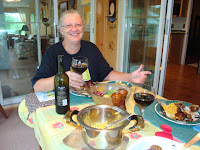 Hans made enough Buletten (they freeze well) before he returned to Germany so that I would have them to enjoy during my stay in Nova Scotia (we were there separately last summer).  When my friend Mary from Ontario visited me in early September, I served them, along with Hans' red cabbage and gravy--both of which also freeze well--to her, Paula and Laurie.  The following day, Mary and I had a relaxed meal (as shown above)--more Buletten--in our front porch off the kitchen, thus the informal setting.

Buletten can also be found on the menu from time to time in Gasthäuser in Baden-Württemberg, but I didn't realize that until much later.  Here in southern Germany they are called Frikadellen or Fleischküchle (literally translated:  little meat cakes).

The first time I had those large patties accompanied by potato salad--rather than boiled or mashed potatoes--was at the Brauhöfers Braustübl  (the brewery Gasthaus), in the small town of Ulm, near Achern, about a 40-minute drive north of us. 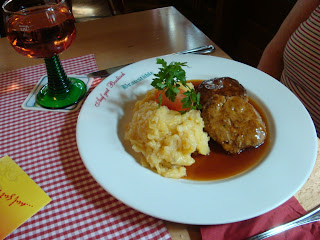 The Fleischküchle were excellent and that potato salad was and is the best we have ever had.  That is saying a lot because we have had some great potato salad, including our friend Monika's and Hans'.  He has tried to duplicate the Braustübl's and has come close, but he has not equalled it as yet.  He asked the chef how he made it, but he would not divulge his secret.  He did tell Hans, however, where he bought his potatoes.  So now, whenever Hans goes up there, he goes to the same farm for our potatoes.  I drive to Ulm with him most of the time and on each visit I order the Fleischküchle and potato salad--in the middle of the afternoon because that is when we are always there. 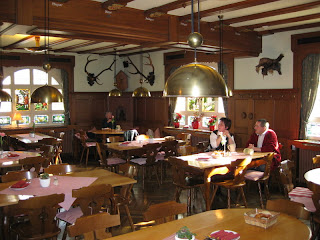 The Brauhöfers Braustübl is one of the loveliest brewery Gasthäuser in the region.  There are several others that we know as well and all of them are gemütlich, but this one is our favourite.  It is rustic, historic and beautifully decorated with stained glass windows, wooden beams and wood panelling.

In the summer, they have a large beer garden under the plane trees.

Elli, the Wirtin (lady innkeeper) at the Gasthaus Krone in Allmannsweier, occasionally serves Fleischküchle at noon.  A few weeks ago that is what she had on her menu.  Hans and a group of men friends meet there each Wednesday at 12 o'clock, and knowing how much I liked those meat patties, he brought me a serving home, along with her potato salad. 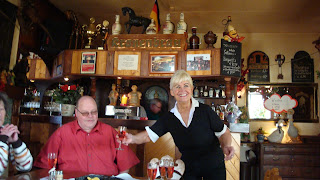 This picture of Elli was at her Gasthaus on Ash Wednesday, the 9th of March, which also happened to be her 71st birthday.  We ladies had joined the men for lunch that day, though not for Fleischküchle but for a traditional Ash Wednesday meal, similar to the one I wrote about last year.  Elli served us all a glass of Sekt (German champagne) to celebrate her special day.

Many Metzgereien (butcher shops) and supermarkets sometimes have ready-made fresh Fricadellen (another name for Buletten).  A customer buys one and, along with a piece of bread or a Brötchen (a crusty roll), has it for lunch.  They taste great cold with hot mustard.  It is similar to having a cold meat loaf sandwich, something many men like.

Our recipe for Buletten comes from a cookbook of mine called Die echte deutsche Küche.  Hans has made a few changes and additions and has translated it into English. 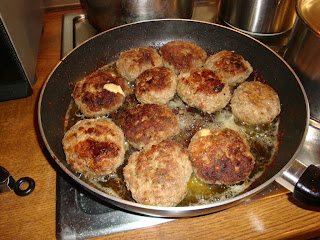 We always want more than the recipe calls for, so I suggest you double or triple the recipe.  Any you don't use for your meal will freeze well.

Melt the butter in a small frying pan; add the chopped onion and garlic and cook them until glassy.  Soak the day-old Brötchen or day-old French bread one half hour in cold milk and then drain it well in a sieve, squeezing out the liquid.  (The recipe calls for hot water, but Hans always uses cold milk.  You can use either.)  *Note: do not use a regular bun or roll as they are too soft.  You can often buy Brötchen in a German bakery.

Place the ground beef and pork in a large bowl; add the cooked onions and garlic, squeezed out Brötchen (it will break apart), egg, parsley, Maggi and seasonings.  Mix well together.  With damp hands, form the mixture into balls; press down a little until flat on both sides, but still rounded.  Note:  The recipe says form into small balls.  Hans makes his Buletten fairly large and so do most Gasthäuser.

Heat the Schmalz or butter/oil in a large frying pan; brown the Buletten slowly (on both sides) for about 15 to 20 minutes, or until cooked through and crisply browned.  It is better to have them too brown than not brown enough.  Serve with gravy on the side.

No directions for sauce were given with the recipe in the cookbook.   Hans makes his own.  The sauce or gravy adds greatly to the dish.  Make your own favourite beef gravy or as Hans makes his.  (It's important to make it from the same pan the Buletten were browned in, scraping up all the bits.)

Hans' Sauce/Gravy:   He often starts off with a package of Knorr dry sauce mixture (mushroom or Jägersauce--Hunter's sauce--or a similar beef-based sauce package) using about 1/2 cup of water with it (or as the package directs).  Stir both together and then pour it into the hot frying pan in which the meat patties were cooked (set the patties aside and keep them warm).  Hans adds some Knorr Delikatess Bratensauce, which comes in a tube.  (You may be able to buy it in a German Deli or in a supermarket.  This thickens the gravy, adds flavour and helps to brown it as well.)  Or, instead, you can add a good beef cube or so if wished.  Stir well.  Then add 1/2 cup cream, 2 to 3 dashes Maggi, 1/2 teaspoon sugar, a shake or so of Tabasco, about 4 tablespoons red wine and 1 tablespoon Cognac or brandy.  (When using a  package of dry sauce mix, you can use less water than called for and replace the water not used with red wine; add more wine if needed or desired.  You don't want the gravy to be too thin, however.)  Serve the gravy in a sauce boat and keep hot over a candle if possible. 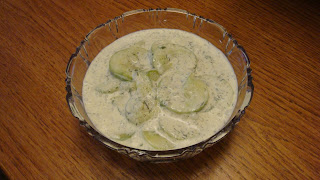 Cucumber Salad - Serves 2 (with a little left over)

Posted by Janet MacDonald at 12:38 PM