Throughout the year we go to special Gasthäuser for dinner knowing we shall have a delicious meal.   Recently we had two superb dinners celebrating our birthdays--nine days apart.  Hans had suggested cooking at home for one of them; I opted to go out on both days so that we could each enjoy our day without thinking about the meal to prepare.  So that is what we did. 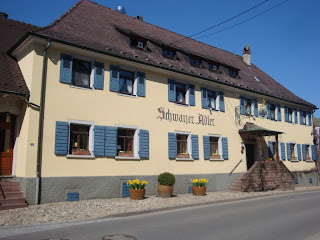 Hans' birthday came first and on that day we went to the Schwarzer Adler in Oberbergen.  I wrote about this Gasthaus last year as that is where we went on my birthday in 2010.  This year was Hans' turn.  That beautiful old Gasthaus is family-run and owned by the Familie Franz Keller.  Franz Keller's son, Fritz, along with his wife, took over the Gasthaus upon the death of his father a few years ago.

As always, it was a superb evening. We--well, more I--watch what is going on at the other tables:  the food that is brought out; watching a beef fillet or a whole chicken being carved at the tables; wine being decanted; silver serving trays and sparkling glasses placed on side tables; silverware carefully placed and replaced after each course and, of course, our meal arriving at our table with the bottle of white wine placed in an ice bucket and the red wine decanted at  the small table beside us. 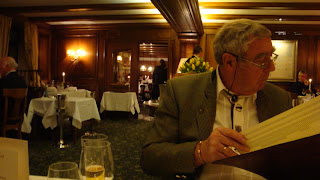 Hans at left reading the wine card and on the right, sampling the wine while the sommerlier awaits his verdict.  "Very nice," Hans says.

The wine was a 2008 Franz Keller Selection S. Spätburgunder Rotwein.  The Sommelier decanted it, more for the appearance than necessity--as the wine was young, there was no sediment.  A wine decanter, though, adds to the ambience of the setting.
We ordered the gourmet five-course "Feinschmeckermenü" as we usually do.  Veal with a Spätburgunder sauce was the main course.  (Spätburgunder is a type of red grape grown in our state of Baden-Württemberg.)  As Hans does not eat veal, he asked for steak instead, which also came with a sauce, but a different one than mine.  (We have found that most Gasthäuser and restaurants will offer something else other than what is on the menu if you ask them--as long as they have what you ask for of course.  That goes for local and smaller Gästhauser as well as the larger places.)

Once again, as last year, I forgot to take pictures of our main course, being in too great a hurry to taste the food placed in front of us!  So you can understand that we do look forward to our evening and the wonderful meal to come. 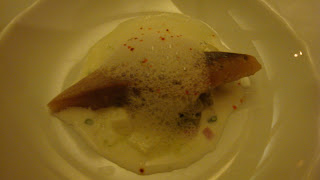 There were two small "on-the-house" offerings before our menu began, including Matjes, nestled in a frothy sauce.  Matjes (Holland's national seafood) is brine-cured fresh herring and I must say it was excellent, even though I am not a fan of brined fish.  Various types of bread were offered with each course other than the main one, although it was certainly available if wished.
The first course on the menu was Fenchel Gateau, which was fennel with smoked trout.  The second was Atlantic scallops Beurre Blanc with another frothy concoction that included truffles.  Both these courses were excellent, but the second, the scallops, was superb. 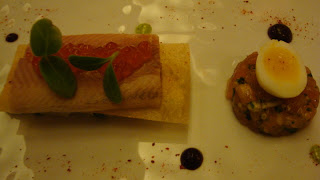 The smoked trout served on French bread with the fennel gateau topped with half a boiled egg. 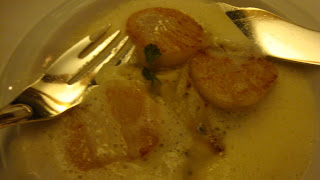 Lightly sauteed large scallops in a superb truffel sauce shown at right.  (I wonder if the scallops came from Nova Scotia?  I have seen them at the supermarket in Strasbourg, and as Digby scallops are world renowned, it is possible.)
Dessert was a delicious--and rich--dark chocolate mousse with caramel, topped with a passion fruit sorbet.  Then, once again on the house, petits fours, shown in the picture at right. 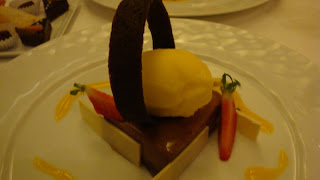 At the end of our meal, the maitre d'hotel brought Hans a Kirschwasser on the house.  Herr Pfingsttag actually brought two  for him to try:  one of the restaurant's own (distilled on the premises) and the other, an Alsatian cherry Schnaps.  Hans preferred the Schwarzer Adler's.  I declined as I seldom drink Schnaps.  Many years ago I had my first one with friends who were visiting from Canada.  Jerry and Marina never let me forget that event as they said my eyes doubled in size as it was so strong and I was so surprised.  I am much more careful these days!

The restaurant was full that evening as it usually is, with guests from various places in Germany, the Alsace, Switzerland and the Netherlands and some, like us, from within a few kilometers.  That is part of the pleasure, that warm yet international flavour, thus contributing to another lovely evening to remember. 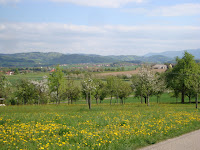 One of our favourite destinations for an afternoon drive is through the hills to Freiamt, a large region--partly on a plateau--with many small villages and no large towns or cities.  It is a beautiful area, with rolling hills, green meadows and narrow country roads.  It is anywhere from a 15-minute to a 35-minute car drive from where we live.  We know it well, along with many of its Gasthäuser.  The pictures above show that spring has arrived, with the dandelions and the apple trees in bloom.
Mussbach in Freiamt and the Gasthaus Zur Krone 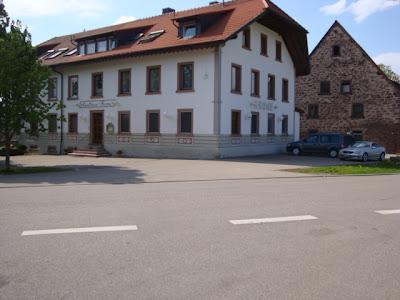 On my birthday we chose a simpler place than on Hans' but nonetheless a lovely Gasthaus.  The food was superb!  One expects that at a Michelin one-star such as the Schwarzer Adler, but not necessarily at a country Gasthaus.  We had been to "Zur Krone" a few years earlier and many times for a drink on a Sunday afternoon.  We knew the food was good, but we had forgotten just how good it was.  Every single thing we ate had so much flavour that I am still thinking about that meal almost four weeks later!
The Gasthaus is owned and run by the Familie Manfred Kern, the son--a trained chef--having taken it over from his parents a few years ago.  His wife greets the guests and looks after the dining area--doing some of the serving as well, along with a female waitress.  Before the son took over the Gasthaus, his father--who farmed during the day--ran the Gasthaus in the evenings, his mother doing the cooking.  On Sundays they
were open all day. 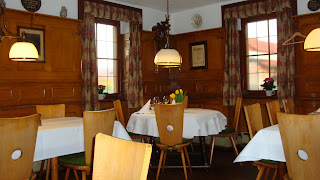 That is still the case:  open evenings only, except on Sundays.

On the right, a view of one end of the dining area.
We stopped here several times over the years on a Sunday afternoon for their dessert specialty of the house:  homemade meringues filled with their homemade ice cream and their own whipping cream.  That is when, of course, they had cows and had their own milk, cream and butter.  The father, Herr Kern, had also been known for his Bibiliskäs (the Allemannisch word for Quark, which is somewhat similar to cottage cheese), but when some bureaucrats decided that Gasthaus owners and others could not make their own to sell, he eventually had to stop serving his in the Gasthaus.  He was a rebel, however, and he did offer it for some time.  He and Hans had many conversations over that, with Hans being almost as annoyed as Herr Kern, who still lives in the house but no longer comes into the Gasthaus as he is now 85 and does not get around easily these days.

Below, awaiting dinner over a glass of Weissherbst wine. 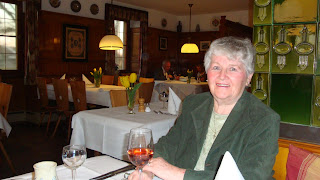 We ordered beef tornados with a Kräuter or herb sauce for dinner, which had been on the menu as Rind Geschnetzeltes (small slivered pieces of fillet steak in a sauce).  The Wirtin, Frau Kern, asked if we would prefer tornados, so that is what we ordered instead.  Along with it, came a wonderful assortment of fresh vegetables and Brägele (the Allemannisch word for Bratkartoffeln or pan-fried potatoes), all served in ceramic dishes and kept warm over a hot plate. 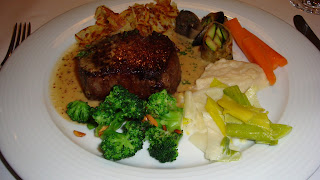 Those pan-fried potatoes were full of flavour and crisp on both sides, different than any we had ever had and some of the best I can remember--not Rösti, the Swiss pan-fried potato or potato pancakes, but they reminded me somewhat of both of them.  They had been fried in butter and perhaps a little oil and were perfectly seasoned.  The potatoes were all in one large joined piece, very thin and lacy and easily cut apart.  We shall have those potatoes there again! The steak was outstanding and so were the vegetables, everything beautifully seasoned and flavourful. 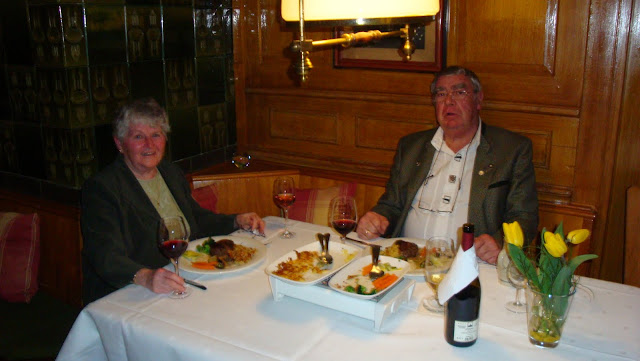 The wine we had was a 2008 Waldulmer Pfarrberg Spätburgunder Rotwein Kabinet.  That wine comes from the region outside Offenburg, just a little north of us.  Most German reds are not decanted, nor was this one.  It was not necessary to do so.  Wines are decanted because of the sediment that sits at the bottom of many bottles of older red wines, mostly French, Italian or Spanish wines.  We have not seen many old German wines, as most are drunk when quite young still.  If there is sediment in the bottle and then poured into the glass without decanting it first, that sediment will then end up in the glass along with the wine, thus tasting of the tannin and with a pelty feel to it, ruining the true taste of the wine. 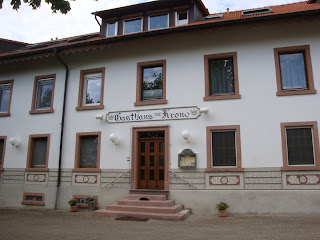 This evening had been another memorable one and a Gasthaus we shall return to before too long I hope.  With all the many Gasthäuser, restaurants, Vesperstuben and Weinstuben from which to choose, it might be a while though.  But it will be on my mind until then!

Note:  The Schwarzer Adler is closed on Wednesdays and Thursdays.  As it is a one-star Michelin restaurant, prices are accordingly higher.  The Gasthaus Winzerhaus Rebstock, across the street, also belongs to the Franz Keller family.  It serves regional food and is less expensive.  The Krone in Mussbach is also closed on Wednesdays.  Both Gasthäuser take annual holidays and will be closed at some point in the year, but not during the tourist season.  To access their web sites, go to "Google" and give the Gasthaus name, the name of the town and the region it is in.  (The region would be Kaiserstuhl or Freiamt, for example.)

Posted by Janet MacDonald at 2:07 AM