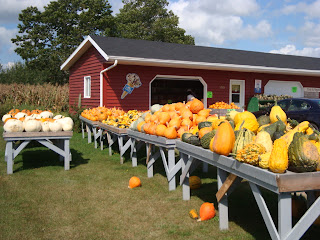 September and October herald the autumn celebrations in both Canada and Germany.  For young and old it is a time to be thankful for the bountiful harvest, for the trees changing colour during usually sunny, beautiful days and for fresh root and trailing above-ground vegetables in all the markets.  Thanksgiving in both countries is in early October, just one week apart; in the United States, about six to seven weeks later.

The picture at left shows the fall vegetables at a market near Berwick, Nova Scotia, taken the day before I returned to Germany in mid September.

The picture of the grapes on the vine was taken by Hans in the Kaiserstuhl, south of us here in Germany, in September.  The forecast for the grape harvest this year is that it will be both plentiful and of good quality. 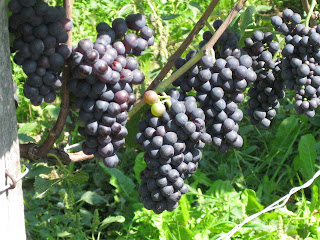 The market below, one of our favourites, is held in the countryside in Freiamt--about 30 minutes southeast from us--every Friday afternoon. 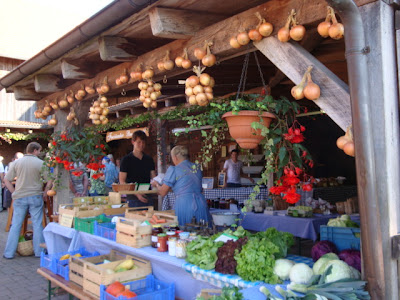 Onion tarts and new wine are traditionally served together.  The onion tart has a pastry crust, with sour cream or creme fraiche (sometimes sweet cream) mixture spread on top and covered with onions and Schinken (similar to bacon).  It is then baked in a special oven. That first new wine is sweet and with each week that passes it become drier and clearer (note the colour of the very new wine in our glasses below).  Some of that wine is kept for the fall harvest period and onion tart time; most of it goes into barrels and will not be sold until the following year.

Below is the Zwiebelkuchen we had at the Freiamt market with our glasses of Neuerwein from the newly pressed grapes.

Zwiebelkuchen (Onion Tart) - The pastry for onion tart is not like North American pie crust.  There are various recipes for it, depending on where it is made.  The crust will be made with flour, sometimes yeast is added, salt, milk or water or sometimes light cream, sometimes an egg, butter and sugar.  The topping will include either sour cream or creme fraiche (often a combination of the two) or sweet cream.  One that the German cook at former Canadian Forces Hospital Europe made had fresh cream and eggs in the topping. 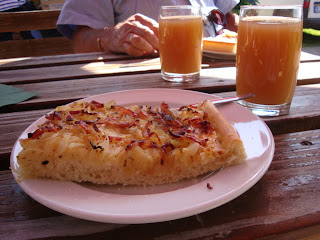 Our friend Monika uses flour, yeast, salt, a little water and a little oil for her crust.  For the topping, she mixes together 200 grams of sour cream (about three-quarters of a cup), 1 egg, salt and pepper.  She cuts smoked Schinken (or smoked bacon)--amount wished--into narrow strips.  She slices about a pound of onions (or the amount wished) and  puts them into some sour cream to soften them, leaving them in the cream for two to three hours in the fridge.  (Or instead, as some recipes call for, saute the sliced onions in a little bacon fat until soft, but not browned.)  Note:  Sour cream in Germany is naturally soured, not artificially as it is in North America; therefore, it is much milder in taste.

Autumn also heralds many Oktoberfests, one of which is our favourite and it takes place each year on the last weekend of September.  Those celebrations are held at the Gasthaus Linde in Wallburg, just seven or so minutes from where we live.  Now we make sure that each year we return from Nova Scotia in time to attend.  This is the same Gasthaus where I go for chicken every week, so I know it well--and they know me well, too!

Albrecht and Waltraud:  the Wirt and Wirtin at the Gasthaus Linde 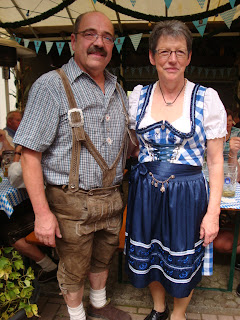 The Oktoberfest at Rust, which I wrote about a week ago, and the one at the Linde are a contrast in size.  In Rust, it is a huge hall with a thousand people in it.  In Wallburg, it is small, friendly, warm and personal.  As we would say in Germany:  Gemütlich!  Both fests have good food, lots to drink and great live music.
Below, a view of the area, showing Hans in both. 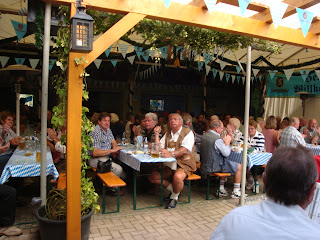 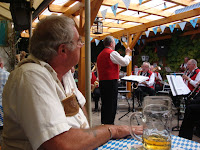 The Linde set up for their fest in a covered area behind their Gasthaus, with the traditional benches and picnic-style tables covered in the Bavarian blue and white colours.  Red geraniums (still perfect from spring), hung from the walls as did blue and white banners.

Below, a good view of the area (geraniums in the back) with the band master (forefront) taking a break 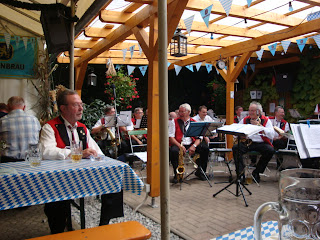 The table service was excellent, with the servers or waitresses in Trachten as was the case at Europa Park's Oktoberfest.  (I did err in my blog post about that when I said the servers at Europa Park wore Black Forest Trachten.  They actually wore Bavarian Trachten as did those at the Linde and as did I.  These two fests are, after all, Bavarian-type fests.)  What stood out at both was the number of people wearing the traditional dress, more than we have seen in the past few years.  This, too, added to the Gemütlichkeit.  My own dress I bought two years ago, wearing it on a number of similar occasions.
Here I am with Hans' beer stein in front of me and my own glass of Weinschorle, a mixture of half white wine and half carbonated mineral water.  I find that at fests the white wine is not to my particular liking as it is generally just a normal table wine or everyday wine.  Weinschorle is a good substitute and has only half the alcohol content. 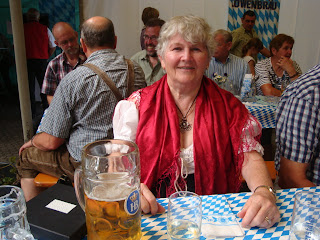 The Oktoberfest weekend at the Linde began on Saturday evening with food and live music; then, again, on Sunday morning for Frühschoppen; once more on Sunday evening and, lastly, on Monday evening.  Live music, food and beer were part of all the celebrations.  (Bavaria is known for its beer and Oktoberfest is traditionally a beer fest!)  Waltraud told us later that on every single day or evening all the benches were filled.  One night they had to bring in more tables to accommodate the crowd.  Each year, as it becomes more and more known, it becomes more and more popular.
Here I am (centre) in mid morning, with things just getting underway 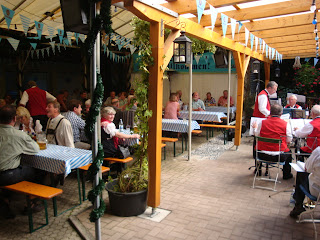 Hans and I went for Sunday morning Frühschoppen at around 10.30, which traditionally begins after church services.  Throughout the year many Gasthäuser have Frühschoppen on Sunday mornings, although it is usually just the men who go after church, sit at the Stammtisch and enjoy a beer and conversation, while their wives go home to prepare the traditional Sunday Mittagessen or noon dinner.  For a fest, everyone goes to Frühschoppen--men, women and children--and partakes in the food that is offered along with beer and wine and, of course, soft drinks and mineral water. 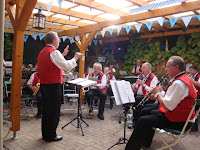 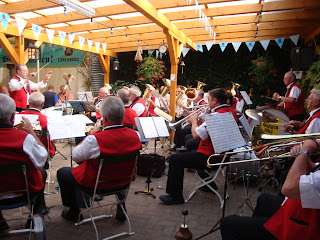 The band started playing at 10 a.m. and they continued until 3 p.m., with breaks just every half hour--and not for long.  That band is also one of the reasons that brings us there.  They are fantastic.  They call themselves "Die Lustige Funfzigers" (The Happy Fifty-Year Olds) and all, with the exception of perhaps three or four, are now well over 50 (there are more than 25 of them altogether).  The average age is 66, which means many of them are now in their 70s, one of them being in his late 80s.  They play the music we love:  marches, folk music, popular songs, polkas and drinking songs.  Clap along music!  And, as at the Europa Park Oktoberfest, lots of "Prost, Prost, Prost!" ringing throughout. 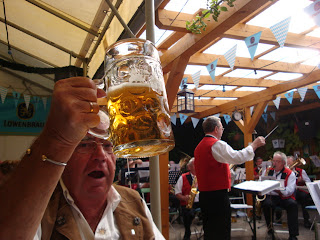 Hans' favourite piece of music at a fest and one of his favourite at any time is "Alte Kameraden," military marching music.  Below, this was the piece of music on their music stands and it was played specifically for him as he had requested it, something he does each year.  It is all about "old or former comrades."  Everyone clapped to that wonderful marching music. 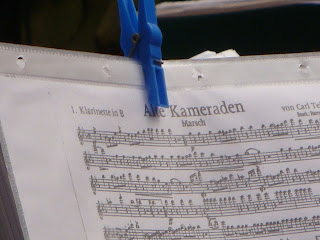 The cost of the food and drinks at a fest is always reasonable--usually less than at the regular Gasthaus prices--although with less choice than if ordering from a regular menu inside the Gasthaus.  (At a fest, it will nearly always be a special menu outside and also inside if the fest is taking place there as well).  Here, at the Linde, as at Europa Park, Bavarian specialties were the order of the day.
Below is the food I ordered:  Schweinebraten and Sosse, Rotkohl and Kartoffelbrei (roast pork and gravy with red cabbage and mashed potatoes).  That is a typical Bavarian meal and also one found all over Germany.  Delicious!  I gave Hans' recipe for red cabbage in my blog of December 16, 2010. 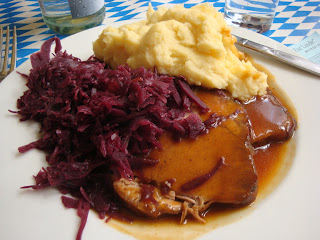 Hans ordered Haxen mit Kartoffelsalat und Brot (pork hock with potato salad and bread).  The potato salad was not made with mayonnaise but with broth.  Hans said his meal was also excellent. 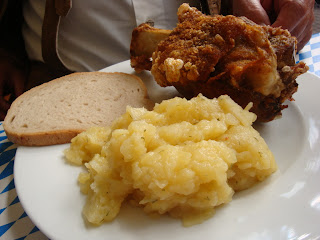 The beer came from Bayern as it did at the Europa Park.  At the Linde, they had Löwenbräu, another well-known Bavarian beer. 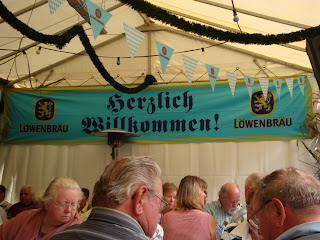 As a note of interest, the original (first) and largest Oktoberfest is still at the "Wiesn" in Munich.  This is and was a great Oktoberfest, one to which we shall return, next year perhaps with friends from Canada. 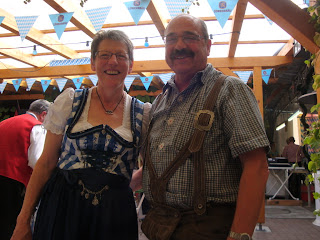 Autumn is a time to enjoy nature and the bounty from the fields and gardens; a time to visit the markets and to sit in the sun with a good glass of beer or wine.  It is also the time to reflect on life's pleasures and one's own life, to think about family and friends near and far, present and past and, most of all, to be thankful for all that we have.
The Thanksgiving display at the beautiful  350-year-old pilgrimage church in our small town 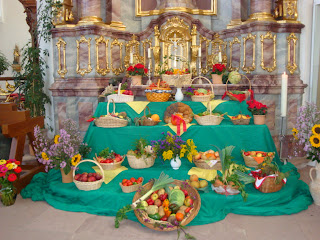 May you all have had a wonderful Thanksgiving and beautiful autumn season and may our friends and relatives, who live in the United States, enjoy theirs in November.


Posted by Janet MacDonald at 7:06 AM