All About Rouladen: A German Specialty 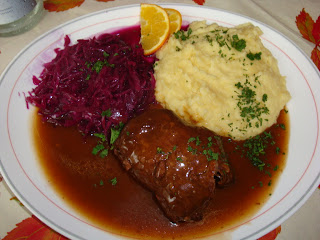 Two of Germany's specialties known around the world are Rinderrouladen and Sauerbraten. The latter, which I wrote about recently, is well known by its German name. So is Rinderrouladen--or just Rouladen, as it is most often called. In some English-language cookbooks, however, they are called beef rolls as that is what they are: rolled up slices of beef wrapped around a filling.  They are also called beef olives.  (The picture above shows a Roulade, red cabbage and mashed potatoes. This was the specialty of the day at noon hour at the Gasthaus Edelweiss in Hugsweier the day I was there.)

I have cooked Rinderrouladen both here and in Nova Scotia.  As is the case for Sauerbraten, recipes vary from cookbook to cookbook and place to place.  Neither one is a Baden-Württemberg specialty, but they are both made by housewives throughout the country and both find their way onto Sunday menus, to Fests and as a specialty of the day at a Gasthaus.

According to Wikipedia.org, Rinderrouladen usually consist of bacon, onions, mustard and dill pickle, all wrapped in thinly sliced beef and then cooked.  (This is traditional in most recipes for it today.)  Beef or veal is used as the meat, although, they say, food scholars believe the original version was venison or pork.  That makes sense to me as in those long-ago days, hunters shot deer and wild boar (as they still do), with various recipes evolving from game.  Pork is still popular in some areas, although beef is the preferred overall.

Beef Rouladen, as we know it today, became popular over the last century.  I don't know how you would feel, but I can say I would not be using pork belly in the filling (mentioned in Wikipedia).  Other things added in earlier years were minced meat, sausage meat and pine nuts--none of which are the usual today.  It can vary from region to region, however, around the world. 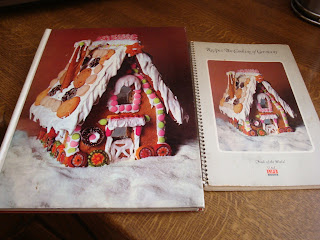 Time-Life's The Cooking of Germany, was published in 1969.  It was written by Nika Standen Hazelton, the daughter of a German diplomat.  I subscribed toTime-Life's series "Foods of the World" in the late 1960s.  Each month's edition came with a large-sized book (shown at far left), giving information about the country, its culture, traditions, food and some recipes.  A small-sized one accompanied it (shown on the right)--one to be used in the kitchen--which included all the recipes.  Today, these books are out of print I believe, but you can find them at secondhand book stores and flea markets still.  They are favourites of mine.

The recipe I used when I first prepared Rouladen came from that book.  I now make another, but some of the ingredients and preparation is from this one still.  One of the things it calls for that adds a lot of flavour to the gravy is chopped parsnip.  I usually do not eat parsnip as I don't like it as a vegetable, but it is excellent in this.  I have not seen another Rouladen recipe using this ingredient, but I recommend doing so.  (My mother always used parsnip in her stews as she said it added so much to the taste.  It also makes wonderful soup.)  As an added note, the last time I made Rouladen I did not use parsnip because I couldn't find any at the market.  The dish missed it and so did I!

There is no red wine in this recipe and, in fact, on checking many of my cookbooks, broth from the vegetables is often used instead.  This recipe is quite traditional other than for the parsnip.  Here it is, from Time-Life's The Cooking of Germany.

Cut the steak into 6 rectangular pieces about 4 inches wide and 8 inches long.  (*You should be able to buy beef Rouladen already cut into thin pieces and ready to be used.)  Spread each rectangle with a teaspoon of mustard, sprinkle it with 2 teaspoons onion and place a slice of bacon down the centre.  Lay a pickle across the narrow end of each piece and roll the meat around it, jelly-roll style. 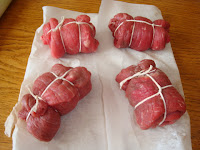 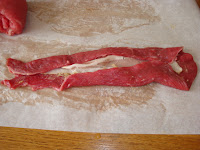 I fold each long side towards the centre and then roll it from the thick end down towards the narrow end, making sure to tuck that end in well.  Then either use picks to hold it together or, as I do, tie it with string at both ends and down the centre if you wish to make sure it is secure.

Add the fat to a large deep frying pan and melt it over medium heat until it begins to sputter.  Add the beef rolls and brown really well on all sides. Watch the temperature of the burner so that they brown well and evenly without burning.  Remove the beef rolls to a dish.  Add the water to the pan and bring to a boil, scraping in any brown particles in the bottom and on the sides, as that will add to the colour and the flavour of the gravy.  Add the celery, leeks, parsnip, parsley and salt.  Return the Rouladen to the pan.  Cover and reduce the heat to low; simmer for 1 hour or until the meat shows no resistance when pierced with a fork.  Turn them a couple times during the cooking.  Transfer them to a platter while you make the sauce.

Sauce:  Strain the cooking liquid through a fine sieve, pressing down hard on the vegetables to get as much of it through into the dish below (that adds to the thickness of the sauce and to the flavour).  Discard the vegetables left in the sieve.  Measure the liquid, return it to the frying pan and boil it briskly until it is reduced to 2 cups.  Remove from the heat.

Melt the butter in a small pan over medium heat; when the foam subsides, sprinkle in the flour, stirring constantly, until the flour turns a golden brown.  Do not let it burn.  Gradually stir in the reduced cooking liquid, stirring quickly and continuously with a whisk until the sauce is smooth and thick.  Remove from the heat and taste for seasoning.  Add the Rouladen to the sauce in the pan and simmer it over low heat only until the rolls are heated through.  Serve the Rouladen on a heated platter or casserole dish and pour the sauce over them.  Accompany them with red cabbage, dumplings, boiled or mashed potatoes.  Beer or a Rhone red wine goes well with this.

I now make Rouladen somewhat differently.  I use a combination of two recipes:  the one from Time-Life; the other from Gourmet Cookbook, Vol. I, plus changes of my own. 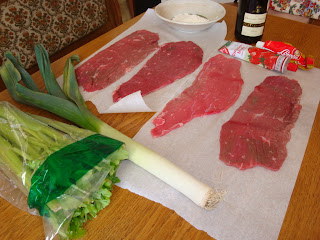 Rinderrouladen - Beef Rolls:  Serves 4
I used a pottery casserole on one occasion throughout the cooking and then set it directly on the table for serving.  You can also use a heavy iron fry pan for cooking, but I would suggest serving the Rouladen and the sauce in a casserole dish for the table.

Spread the beef rolls out (they should be fairly thin).  Sprinkle them with salt and pepper.  Spread German mustard over the length of each (not too thickly and slightly in from all the edges). 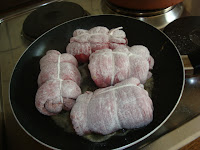 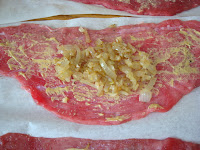 In a large fry pan (heavy iron one for example), heat some oil and butter until hot; saute some onions and mushrooms; add chopped garlic and saute until softened, but not too soft.  Season a little.  Spread over the Rouladen (not too close to the edges).  Place a strip of bacon lengthwise on top of each.  Roll the beef up, closing in sides and then ends as well as you can.  Tie ends (I tied along the length as well, though the ends should be enough).  Dredge the rolls in flour and then shake off the excess.

Add some butter and oil to the pan in which the onions, etc. were sauteed.  Heat until the fat is sputtering.  Add the beef rolls and brown well on all sides.  You don't want them burnt but you want them really brown.  Mix the tomato paste with a little of the red wine.  Pour the remaining red wine over the Rouladen and then stir in the red wine-tomato paste mixture.  Simmer this slowly on top of the stove for about 20 minutes or so.

In the meantime, in a small fry pan, add the 5th slice of bacon and melt it down.  Remove the bacon (you can crumble it and add it later or use it another time).  In that pan, saute the leeks, celery and parsnip a few minutes; add some finely chopped parsley and season with salt and pepper.  Add 1/2 cup or so of water and simmer a few minutes.  Add a little more water.  Pour over the Rouladen and wine mixture; stir it carefully.  Cover it well and simmer it for about 1/2 hour or until the beef rolls are tender. 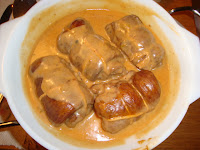 Before serving, remove the Rouladen from the pan and set them aside.  Don't forget to remove the string or picks as I did!  Pour the liquid and remaining ingredients through a sieve into a bowl.  Strain well, pushing the vegetables through as much as you can.  Discard the vegetables remaining in the strainer.  Simmer the liquid for a few minutes in a small saucepan (or use the pan the bacon was fried in) to reduce it and thicken it somewhat.  Taste for seasoning.
Place the Rouladen back into the casserole or fry pan and pour the sauce over the top.  Warm it up by simmering it a few minutes or until the beef rolls are just heated through.  Note the light colour of the sauce. I added cream to the sauce, which turned it a golden colour.  The dark sauce is traditional and without cream.

Serve the Rouladen with red cabbage, brussel sprouts or carrots along with potatoes of your choice.  A good Rhone or Burgundy red wine is excellent with this dish. 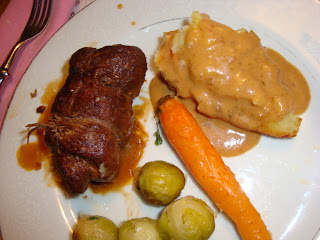 Rinderrouladen and Sauerbraten take time to prepare and cook, but some of the preparation can be done ahead.  Both are perfect for a Sunday dinner or entertaining close friends at home.  They are dishes you can make your own by adding a different ingredient, deleting one you may not like or by adding an herb to the sauce.

Posted by Janet MacDonald at 3:28 AM