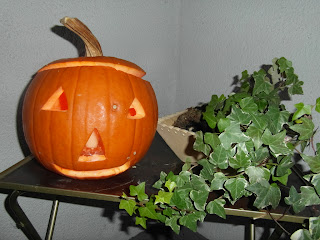 Here in Germany Hallowe'en is not celebrated as it is in North America.  Children here do come around to the doors in their neighbourhoods at a different time of year, however, and are given cookies, candy and usually a little money.  One of those times is shortly after Christmas for Three Kings' Day.  It is definitely not the same huge affair nor with large numbers of kids.  They come in small groups of four, chant a verse and then mark the year in chalk beside the door frame, after which we pass out the good things they hope to receive plus money for the poor.

I don't miss Hallowe'en at all although I loved it as a child myself as did my own children.  In those days we had loads of candy ready to give out.  I also made candy myself for the kids and after they finished "trick or treating" and came back in with bags of sweets, they and their friends bobbed for apples on a string hanging from the ceiling and/or apples placed in a large pan of water, picking them up by grabbing onto the stems using their teeth only.  It was a fun evening for them all.

This year, no children at the door, but Hans carved the above pumpkin and tonight I set it outside.  I placed a candle inside and lit it.  The lighted candle glowed in the dark and reminded me of those earlier pumpkins on our doorstep many years ago. 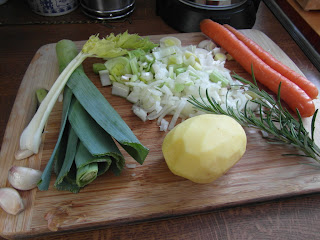 The flesh that Hans removed we turned into pumpkin soup.  I used Petra's recipe (see my last blog post) and one we came across of Jamie Oliver's, the well-known British chef.  I did make some changes and we made some additions.  The main ingredients I used along with the pumpkin flesh are shown in the picture at right: 1 leek, 2 carrots, 2 to 3 garlic cloves, 1 celery stalk, 1 small onion, 2 potatoes and 2 fresh rosemary sprigs.


I used a tip of Oliver's in that I sauteed several bay leaves in olive oil for about a minute.  I then removed them and added the remaining ingredients, except for the 2 potatoes, all of them chopped first.  These vegetables, which I seasoned with grated pepper and salt, I sauteed for about 10 minutes.  In the meantime I had chopped all the pumpkin flesh and placed it in a large pot along with the chopped potatoes.  I then added the sauteed vegetables to the pumpkin along with 1-1/2 to 2 liters of chicken broth and some vegetable broth.  It simmered for a good 30 minutes until the pumpkin was soft.  Then into the blender it went in stages until all was finished and poured into a new pot.

I had earlier sauteed fresh bread cubes in butter and served them over the soup.  I would have sauteed the bread in some garlic as well, but I had no garlic left.  It was a mild-tasting soup so not too strong a flavour of pumpkin due to the many other vegetables used.  But the pumpkin taste was still there nonetheless.  Excellent.  See a bowl of it below that we had for supper. 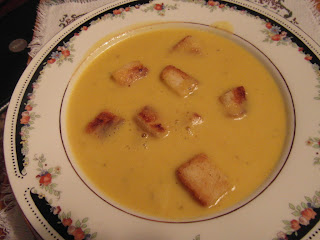 Next time we have it, we shall try some creme fraiche instead of cream to see how that would taste.  We shall also add some Parmesan.
My friend Monika told me today that the pumpkin flesh can be frozen as can the soup itself. That is a good thing as we have lots of it!


Posted by Janet MacDonald at 4:51 PM