Advent and the Christmas Season

Christmas has arrived but today I am writing about the period leading up to that magical time.
﻿ 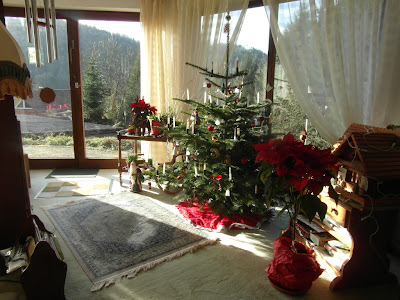 The month of Advent is a busy time for everyone, us included.  We make the rounds of several of our local Gasthäuser, celebrate with friends over a special meal at a restaurant or party, entertain at our own annual Christmas party, browse at some of the Christmas markets and, as always, drive into the country for our Christmas tree.  Along with some baking and shopping, the days are filled.  Family is missing--the only down side--but we enjoy immensely this time of year regardless.  It is a special part of our life here.

Here are a few of the things we've enjoyed and places we've been this December during Advent, starting with our pre-Christmas party on 1 December:


Two pictures showcasing our guests around the coffee table 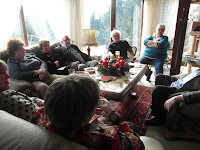 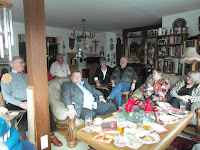 For the first time, we held our party in the afternoon.  It was 1st Advent weekend. That worked best for many, including us.  A lot of our friends no longer enjoy driving at night, especially in the winter, as one never knows whether there will be snow or perhaps fog.  We live at the top of a fairly steep hill, so that can be a worry.  For us, it was somewhat hectic on that day itself, but overall it worked out well.  Everyone seemed to enjoy themselves (as did we), and our feet were up by seven in the evening.  As it happened, there was no snow or fog.  It was a bright, sunny day.

As usual (this is a tradition), Hans welcomed everyone with a glass of "moose milk," better known as eggnog. This goes back to military days.  He makes this from scratch each year.  He has, though, occasionally served Glühwein instead.  The buffet is simple:  a huge pot of chili and lots of garlic French bread. 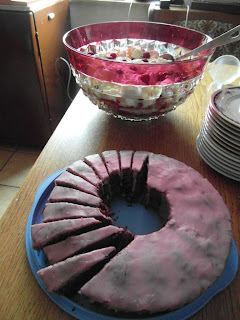 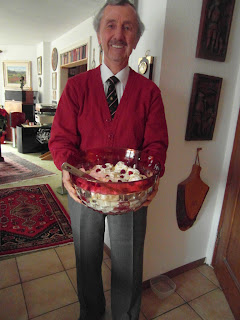 Dessert is also traditional:  trifle.  I swear every year that I'll make something else, but thus far it has always been the same, including this year.
The trifle being displayed by Bill Fairley.  On the right, the wonderful red wine cake made by Sylvi Schlager.
Of course, lots of wine, beer on tap (Hans has a beer fridge which holds a 15-liter keg of beer) and mineral water are offered.  We don't offer hard liquor during the party, although
occasionally a Schnaps after eating materializes.
Hans and I at the Christmas party held in a Gasthaus near Freiburg. 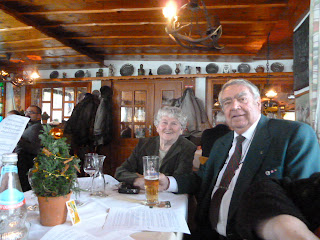 The following weekend, also on a Saturday afternoon, we attended the annual Christmas party that our German veteran friends put on, all now in their 80s.  Hans and I have been included in this for many years.  This is a sit-down dinner in a small town outside Freiburg.  A gentleman entertained us musically on an accordian throughout the afternoon.  A few years ago, a lady pianist did the same.  Some wonderful Christmas music and always, "Alte Kamaraden," in memory of old comrades. 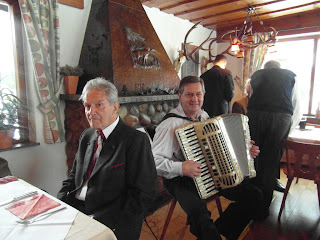 That same weekend on 2nd Advent Sunday, in late afternoon, we wandered through the Christmas market in Münchweier.  It was filled with atmosphere: old houses, the church and stalls that lined the hilly street on both sides.  There, we each had a mug of Glühwein.  It not only warmed our stomachs but also our hands, as it was a cold and frosty day. 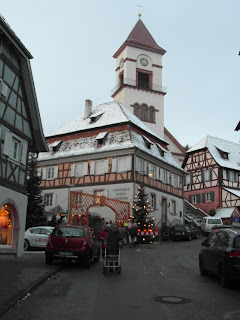 The Gasthaus and Metzgerei Rebstock traditionally open their shop on this weekend with complimentary glasses of Sekt (Champagne-like wine) for those who go inside.  These are two views from outside through the glass.  Some booths and scenes along the street follow. 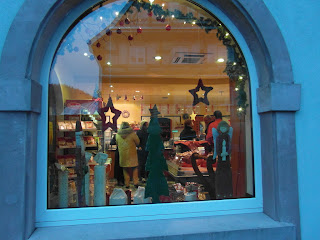 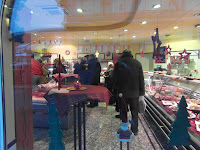 St. Nicolas on the left and a wine booth on the right 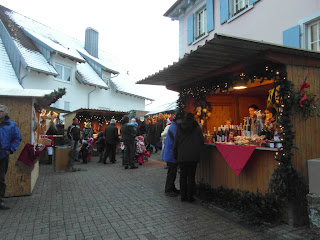 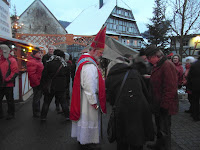 Crepes being made while we watched. 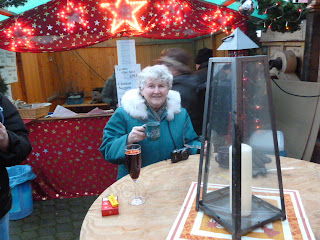 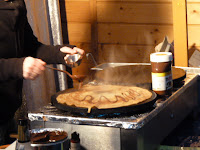 A hot mug of Glühwein to warm the hands.
In the picture below, Whitey, a recent stray, is enjoying the comfort of a warm house on 3rd Advent. 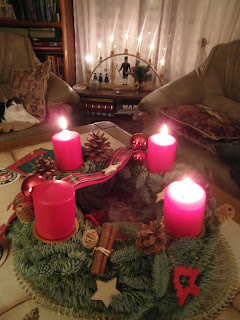 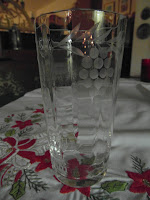 On that Sunday, we picked up two lady friends:  Anita and Lina.  I have written about them on my blog before.  Anita is 88 (I had thought she was "just" 86, but "No," she told me, "I am 88!"); Lina is now 96 and always game for dinner at a good restaurant.  Age is catching up but they are still able to get out.  This time we enjoyed a lovely meal in the historic Gasthof Krone, a hotel-restaurant in Kirchhofen, a small town south of Freiburg in the Markgräferland. That is a large wine area and known especially for their Gutedel wine. They also are known for their special Markgräfler cut wine glasses (see at left).  The Krone dates back to 1747 and has been in the same family for over 200 years.  It is warm and cosy inside with wood paneling, soft lighting, good food and good service. 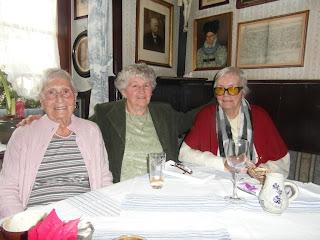 Below, a view of the dining room before other guests arrived.  The other, the corner where we sat, shows a crucifix (typical in many Gasthäuser in our part of Germany as it is predominanly a Roman Catholic area) and old family pictures on the wall. 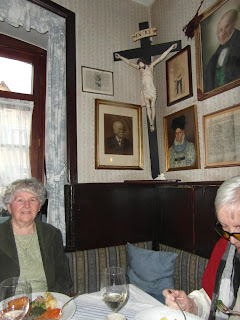 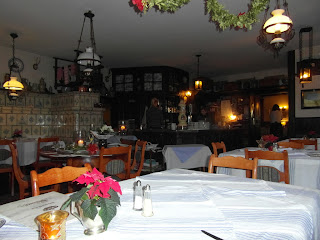 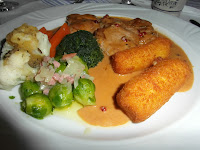 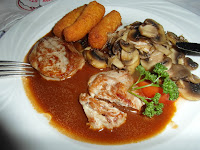 In the last week or two of Advent we visited the farm market "Kasperhof" outside Schuttertal and Dörlinbach. We bought a large piece of Schinken (German-style smoked ham).  Schwarzwald Schinken is world famous and is a protected product.  We also bought two thick rumpsteaks and some jelly. This is a typical German farm although not all farms have their own store. Most of their products are produced right there. 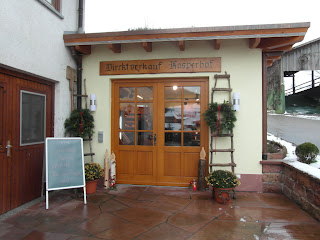 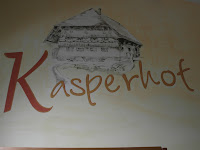 
Farm bread below and Schinken and sausages hanging beside the blackboard with specials noted. 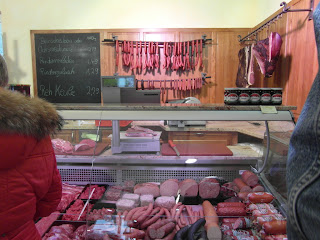 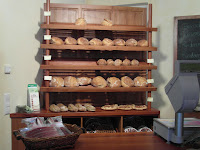 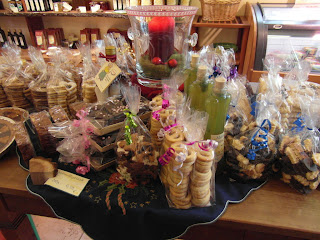 I also did some baking, most of which I have given away as small gifts.  I made my Scotch cake, whipped shortbread and gingersnaps again this year.  The latter were from a recipe of my mother's, one she had been given by my father's aunt.  Last year's gingersnaps were from a recipe my mother was given by her aunt--thus both were my great aunts whom I remember well.
﻿ 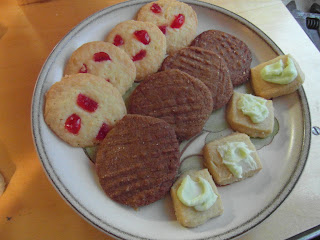 The last week to ten days before Christmas we visited all our local Gasthäuser with many dinners out.  For Christmas itself, though, we were at home.  My next blog within a day or so will tell you about that special part of our Christmas celebration.
﻿
Fourth Advent Sunday, the day before Christmas Eve with Christmas Day soon to arrive.
﻿ 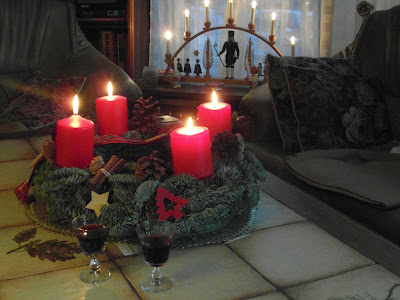