Advent and the Christmas Markets: Part 2 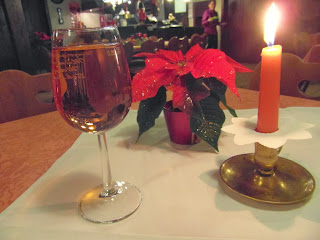 Candles, poinsettias and a glass of wine are part of Christmas.  My favourite every day wine is Weissherbst, as shown above.  It is rose in colour and has a slightly herb or fruity flavour.  This was at one of my favourite Gasthäuser, the Linde in Wallburg, during Advent.

I had been to Fischer's Christmas market on 2nd Advent Saturday and now, on that same day, in the afternoon, I was heading to the Dammen Mühle's. I wrote about that Gasthaus on May 8, 2013.

The organ-grinder below reminds us of our good friend, Mike Hewes, who also has a barrel-organ (some call it a hurdy-gurdy).  In German it is called a Leierkasten or Dreyorgel.  Mike played it a number of times for us in past years.  As he now lives in Quebec, we haven't heard it for some time, thus on this day it was a special treat. 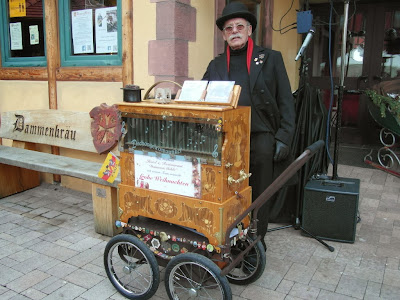 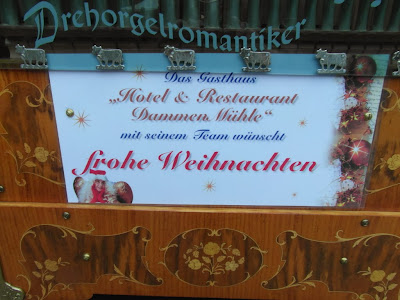 The Dammen Muehle's Christmas market began on Friday afternoon and ended on Sunday evening.  It was beautifully done, with small tents set up around the main Gasthaus, the brewery Gasthaus and a couple of them beside the small lake. 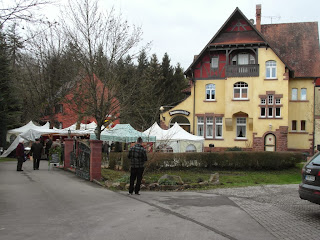 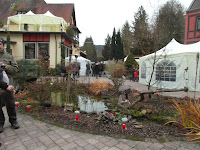 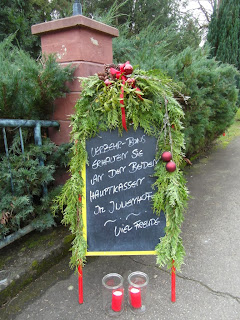 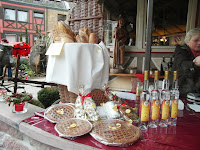 I heard later from good friends, who had gone in the evening, that there were so many visitors that they could hardly move.  In the afternoon it was certainly busy, but I was able to roam at will.  Parking, though difficult, was also easier then.  In the evening it would have been dark with lighted candles laid on the ground along the many paths.  Magical, pehaps; however, I am glad I went during the day.

The Christmas market was full of atmosphere, with everything being made by those selling.  The following pictures show some of that Gemütlichkeit. 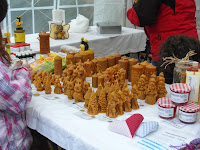 On the left, wax candles; on the right, homemade Linzer Torte, bread and Schnaps. 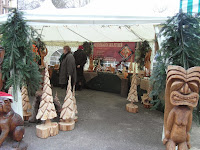 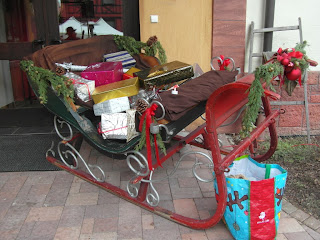 On the left, handcarvings; on the right, an old wagon filled with wrapped presents.

What would a Christmas market be without something to drink? 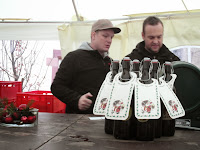 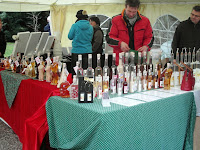 At left, two men selling beer; on the right, a multitude of Schnaps.

Food is always offered at any market or fest. Below, two women setting up a large piece of raclette cheese. 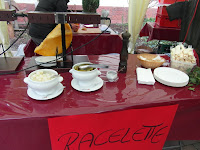 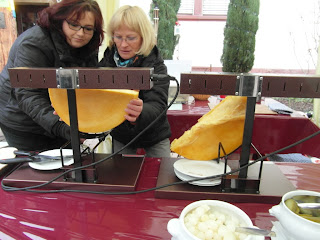 In my latest post about Fischer's Christmas market I mentioned that we would be celebrating 4th Advent later that day, which was a Sunday.  We had raclette for supper after enjoying a good wine and Stollen in the late afternoon.  Raclette or cheese fondue makes for a relaxing evening at the table.

Bread is a huge staple here in Deutschland, with every town having its own bakery.  Münchweier, our closest town, has two.  The Dammen Mühle makes its own. 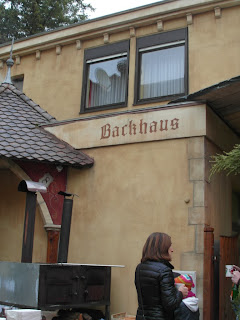 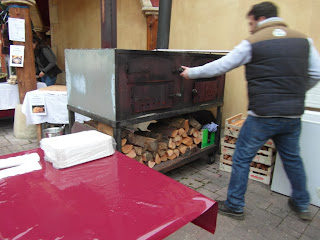 The bake house on the left

On the right, the baker getting the outdoor oven hot enough for
baking the bread.

The finished product below! 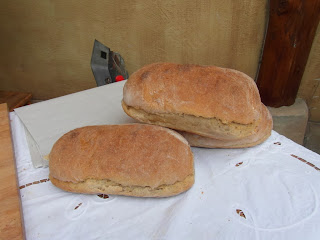 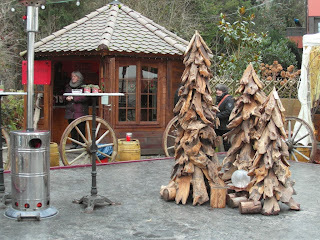 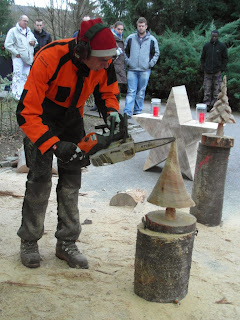 A hut with a heater outside; the trees were carved by the man shown at right, who is in the process of carving a small one. 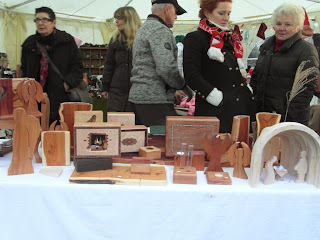 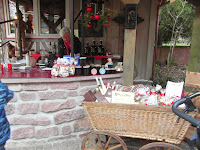 At left, handmade boxes inside a tent; at right, a booth with a wicker cart filled with food items and Schnaps. 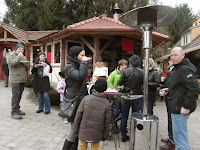 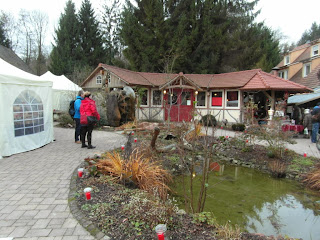 At left, a view of the area near the Gasthaus; at right, a few people enjoying a bite to eat.

A closer view of the wicker cart 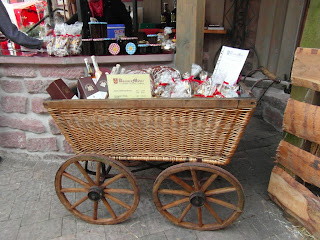 A colourful display of a variety of things 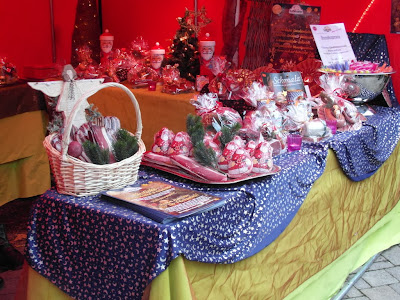 I hope you enjoyed the tour of both Fischer's and the Dammen Mühle's Christmas markets.  Most pictures can be enlarged by clicking on them.

We had a good wine with Christmas baking and Stollen on Sunday afternoon, 4th Advent. 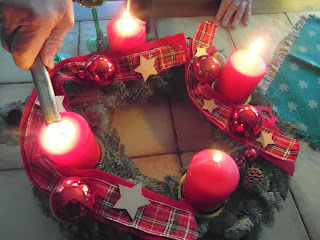 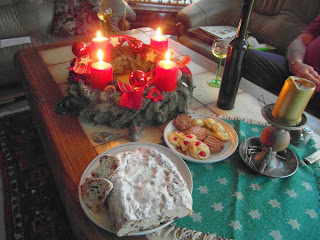 Later, for supper, we had Raclette. 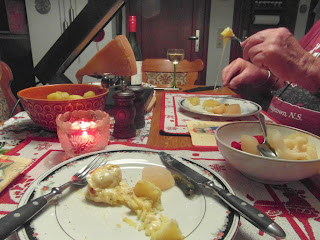 Those special days of Christmas are now just a couple of days away. 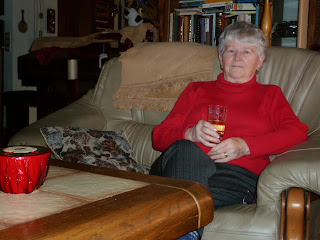 Merry Christmas, Joyeux Noel, Frohe Weihnachten to you all!

Posted by Janet MacDonald at 3:55 AM