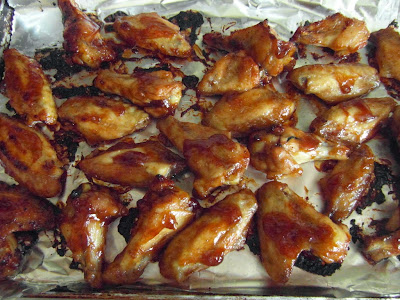 I love wings as much as I love spareribs.  I love them with almost every kind of sauce one can think of, whether they are glazed or marinated in the sauce or the sauce is served on the side.  I make them every so often--usually placing some of the cooked wings in small zip-lock bags; then into the freezer they go for a snack for whenever I get the urge--sometimes for supper, sometimes for lunch.


Garlic wings, End of the Line Pub in Bridgetown 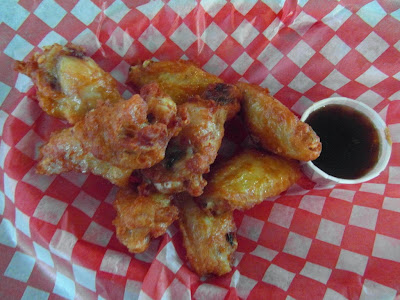 For many years I never saw chicken wings in Germany other than frozen ones.  Now I can buy fresh ones easily.  I have yet to see them on a Gasthaus menu, but occasionally I'll stop at Burger King and have theirs.  When I go to Nova Scotia, I often order wings at a pub and I sometimes make them to take as an appetizer to a TGIF on a Friday evening.

I have tried multi wing recipes and to this day I still clip an interesting one from a magazine, always thinking it might be the best I've ever had.  I do have my favourites, ones I make the most often.  I nearly always marinate them first and/or baste them well with a sauce while they bake.

I have simplified the process by no longer cutting them in half, unless, of course, I am serving them to others.  Once they are cooked and on my plate, I cut them in half then.  Much easier and takes less time and fiddling.  (I remove the tips first if there are any and freeze them for stock later.)  I rinse the wings in cold water, dry them well with paper towels, and then either marinate them or just sprinkle them with salt and pepper.  I bake them for about 20 minutes or so (turning them over once) and then basting them with a sauce until they are cooked. 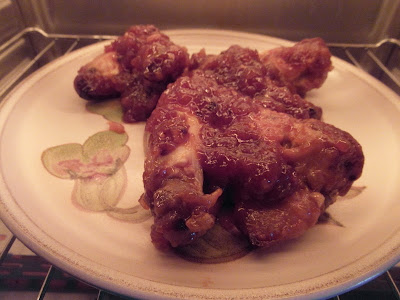 The first time I prepared chicken wings was back in the 1970s in Winnipeg.  I pre-cooked them in the microwave.  We had bought an Amana, the first microwave that was sold at the LX/Canex in Lahr in the mid 1970s, taking it back to Canada with us.  What I did then was put the wings, after rinsing and drying them, into the microwave for about 5 minutes or whatever the time was for the weight, until they were about cooked.  Then, on to the barbecue, basting them with a sauce until they were crisp and full of flavour.  It didn't take long.  We loved them; kids loved them.  I haven't cooked them on the barbecue for a long time now, but it is a great way to do them.

Below: my wings with a lemon and soy sauce. 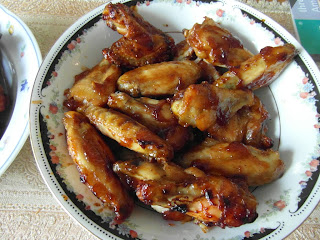 The following recipe is the one I first used.  It is still very good. From Germany, we were posted to Winnipeg along with our Amana microwave oven and other household belongings.  The following summer my brother-in-law Dennis and his family visited us there.  I made that first wing recipe.  My nephew Stephen would have eaten them all if he had been allowed, as he loved them.  Perhaps all of us would have.  Most of the ingredients are usually on our shelves or in the fridge, so this is a recipe that can be made just when you feel like wings.  You just have to buy the wings themselves--or have some in the freezer!

Chicken Wings with a Lemon and Soy Sauce - Makes 12 servings or enough for 4 persons with about 4 wings each.  The sauce recipe should be enough for 4 lbs if you wish to cook more wings.

Preheat oven to 400F/200C.
Remove tips from wings and discard or freeze for broth later.  Divide each wing in half by cutting through the joint (or leave them whole).  Place in a single layer on a broiler pan rack.  Bake in the preheated oven for 30 minutes, turning once.  (They can then be cooled and placed in the fridge until later in the day if wished.)


Mix sugar, cornstarch, salt, pepper, ginger in a small saucepan; stir in water, lemon juice, soy sauce and crushed garlic (if using).  Cook, stirring constantly, until mixture thickens and boils, about 3 minutes.  Brush some sauce over the wings.  Continue baking, turning and brushing with the remaining sauce several times for about 20 to 30 minutes or until richly glazed. 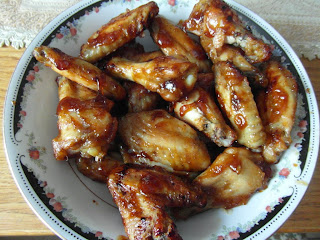 Note:  You can also precook these in the microwave oven instead and then place them on the barbecue, basting with the sauce until well glazed.  Any leftover wings can be frozen--if there are any!

The following two recipes are ones I make often. 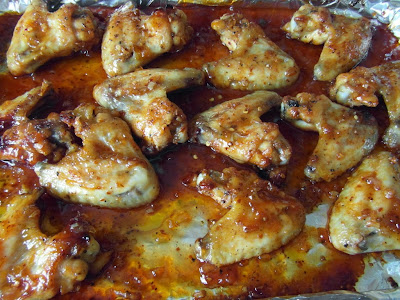 Combine all ingredients except the wings.  Reserve 1 cup or more for basting and refrigerate it.  Add the wings to the remaining marinade in a large resealable plastic bag and turn to coat well.  Refrigerate for 4 hours (or overnight), turning occasionally.  Drain and discard marinade.  (I always hate to lose all the marinade, so I sometimes add that marinade to a small pot and simmer it for about 20 to 30 minutes. You can then put it in the fridge to use as more sauce or freeze it for another time.)

The recipe calls for the wings to be grilled over medium heat for 12 to 16 minutes, turning occasionally.  Brush with the reserved marinade and grill, uncovered, for 8 to 10 minutes more or until the wings are cooked, with the juices running clear.  Baste and turn several times.


Maple-glazed wings just out of the oven 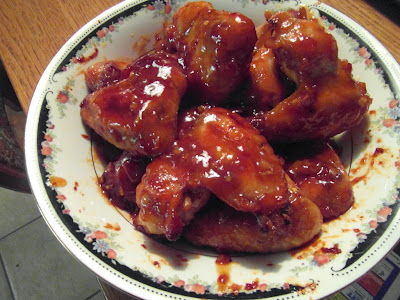 I usually place the wings on an oiled, tin-foil covered cookie sheet.  I bake them in a 375F/190C preheated oven for about 40 minutes-- more or less, depending on the size of the wings--and turning them over every so often, basting them with the sauce.  Have lots of hand wipes or napkins as these are sticky, but so good!

The following recipe I adapted from Woman's Weekly, Oct. 1990.

Marinated Chicken Wings with Sherry (another favourite of mine)

On one occasion, I doubled the recipe but had only 1 lemon, so I used the juice of 1 orange as well; and, of course, 8 Tbsp sherry plus double the remaining ingredients.  I did go easier on the ginger and used just the 3 cloves garlic.  The sauce was very good. 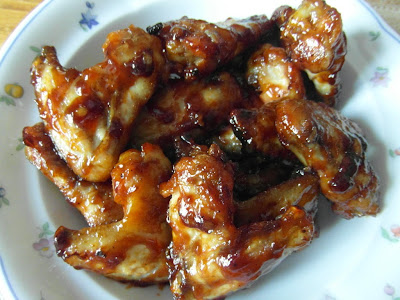 Method:  Lay wings flat in a dish or place in a large zip-lock bag.  Mix together the remaining ingredients.  Pour over the wings and leave to marinate for 4 hours or overnight in the fridge.  Turn 2 to 3 times.  When ready to cook, you can place three wings on each skewer (more skewers if you double the recipe with more wings).  Cook under a medium grill for 20 minutes, turning a couple of times and basting often with the marinade. 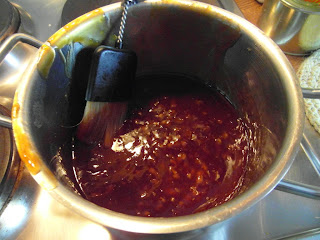 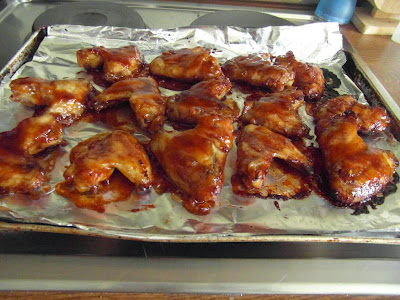 Baking in the oven:  I remove the wings from the marinade and then pour the marinade into a small pot and simmer it.  I thicken it with a little cold water and cornstarch and then simmer it again, using it for basting the wings as they cook.  (You can strain it into a bowl, if wished, in order to remove the garlic.)  Place the wings on a cookie sheet covered with lightly oiled tin foil and then bake them, basting often with the marinade in a 375F/190C oven for about 40 to 45 minutes or until they are cooked.  You can also place them in a large casserole dish and bake them right in the marinade, but basting them now and again.  Just watch that the sauce doesn't disappear.

BBQ'd Wings
I gave two different BBQ sauce recipes in previous blogs.  Both are excellent.  I use one or the other every so often as the sauce for wings.  One can be found in my post of 12 Dec 2012 (Spareribs on Winter Days); the other, on 7 Jan 2015 (Prosit to the New Year). 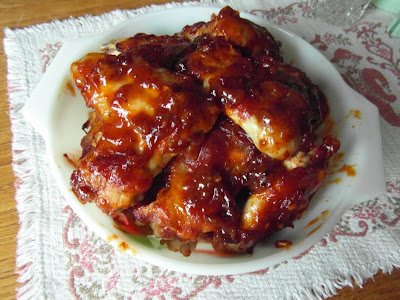 My wings with BBQ sauce on three different occasions (above  and below; the last, a week ago).  As I nearly always have a jar of my own BBQ sauce in the fridge, that makes it fast and easy to make those wings more often.  The sauce is also great on ribs of course.

Place the wings in the 375F/190C oven on a baking sheet and baste with the BBQ sauce, turning a couple times, until they are cooked and glossy, about 40 to 45 minutes. 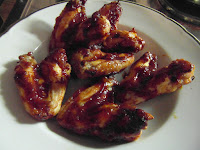 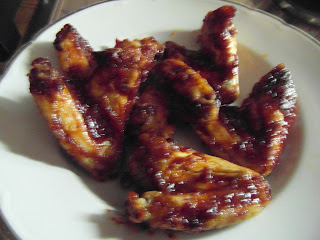 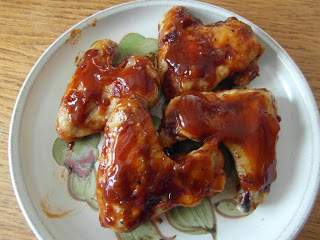 You can also use these recipes for chicken legs or thighs.  Just cook them longer, whether in the oven or on the barbecue.

With any of the wings' recipes, a green or mixed salad, tomato salad or plain fresh tomatoes, along with French fries, sauteed potatoes or even baked potatoes goes well.  Corn niblets or corn on the cob in summer is also a great accompaniment.

On the evening I had the marinated wings with sherry, I sauteed a potato with a few onions and along with fresh small tomatoes, it was a very enjoyable supper.  I didn't have any more marinade to use as sauce at the table, but they were still flavourful and so good. 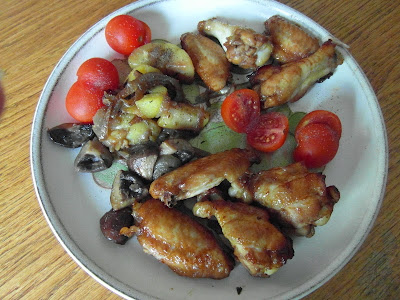 Posted by Janet MacDonald at 7:48 AM