I grew up beside the sea. In Prince Edward Island, fish was a household staple and certainly at least a once-a-week main meal.  I can still remember the fish man stopping in front of our house in Charlottetown and my mother choosing what we would be eating that day from the back of his horse-drawn wagon.

Boats moored at the Charlottetown waterfront, in the city where I was born and became a teen. 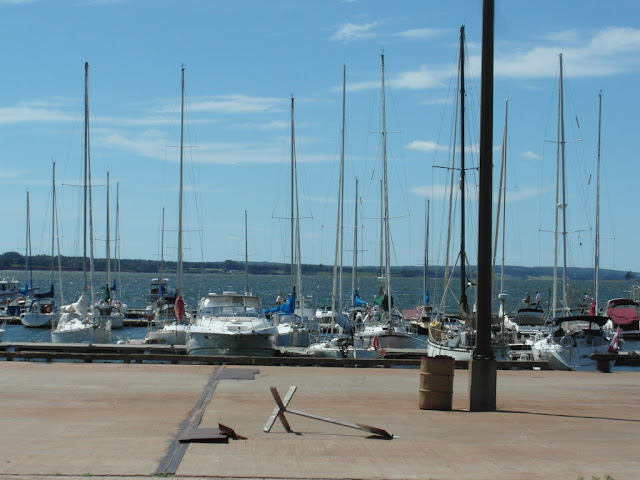 There were no such things as home freezers--at least I never knew of any in those early days; in fact, not everyone had a fridge, including our family.  We had an ice box where ice was put into the top of the chest with a pan beneath it on the floor to catch the water that drained down through it.  So fish was often kept in salt.  Of course the fish trucks and wagons delivering the fish were not refrigerated either although they did have ice.

On fish days, cod was often the choice--and even more certain, salt cod.  I hated salt cod nights.  It didn't matter how Mom cooked it, I didn't like it. Cod cakes were probably the least worst in my eyes.  Even then it wasn't a supper I looked forward to and Mom usually did serve them for supper, probably because we'd had the cod for dinner that day or the day before and these were the leftovers.

Since those days I have learned to love fish cakes.  My sister Paula in Nova Scotia makes wonderful ones, similar to our mother's.  They are the best I have ever had. However, she never makes them with cod, but with haddock or sole.  Mom, of course, didn't always use salt cod for them but quite often she did.


I made fish cakes this week; this is one of them. 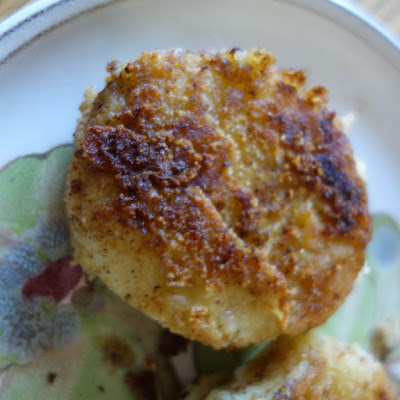 Note J:  Fresh fish must be fresh as it decomposes quickly.  If using frozen, the fish should be well frozen and then thawed slowly in the fridge. Use it as soon as possible after thawing.

Paula's recipe for fish cakes:  Saute 3 or 4 pieces of fresh or frozen (thawed) haddock, sole or other white fish until it is cooked through.  Drain and flake (break apart).  (You can, of course, use fresh unsalted cod as well.)

Peel and then boil until tender 8 or 9 medium-size potatoes; mash them well.  Saute some diced onion in butter so that it is a bit soft but not fully cooked.

Mix the flaked fish, mashed potatoes and onion together.  Add some butter (enough to make a nice consistency) and about a teaspoon of celery seed; also, McCormick's herb and garlic (I used some herbs and fresh garlic, minced); or, you can use a little Italian parsley, garlic powder to taste, salt and pepper.  Paula says the salt and pepper are important for fish cakes; I found that she was right as I added more salt later.  Better to add salt than use salt cod I say!


Mix everything really well and if need be add 1 to 2 tablespoons cream to make combining it all easier.  (I used enough butter and didn't need cream.)  The mixture will be fairly soft.  Form it into thick patties.  Cover them and place them in the fridge to rest and firm up. 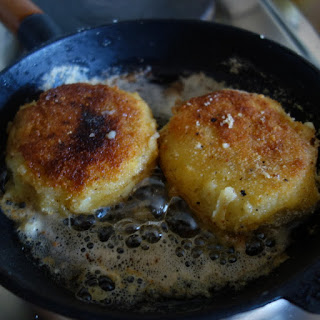 Note J:  I used only 4 small potatoes and less fish and had two large fish cakes from that.


(The two at left are cooking in butter in my small black iron frying pan.)

When you are ready to cook them, place fine bread crumbs into a bowl with some salt and pepper and some McCormick's herb and garlic.  Gently beat two eggs in another dish (I needed only 1 egg for mine--with egg left over--as I had less potato).  Dip each fish pattie in the egg and then dip into the bread crumbs until all the patties have been covered with the crumbs.

Paula says to fry the fish cakes in lots of butter--the key to fine-tasting fish cakes--and fry on both sides.  You want them nicely browned with a bit of crispness.  Serve with butter.  Salt and pepper them to your own taste.


Fish and chips is a favourite dinner throughout Great Britain and Eastern Canada as well as on the Eastern seaboard of the USA.  Along the coastline of the Maritime provinces  you will find them everywhere. 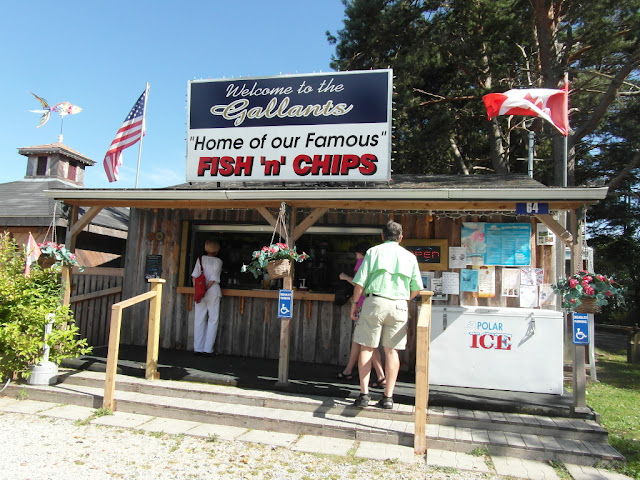 Hubbards, on Nova Scotia's Atlantic coast, has a neat Fish n' Chips take-out place that is busy in summer.  On the left in the picture above, my sister Carol is ordering and our brother-in-law Stephen is checking out the menu.  We ordered dinner for several of us that day.

Sometimes Mom bought fresh haddock or fresh cod and that meant our favourite meal of fish and chips that night.  It always seemed special, probably because we seldom had French fries in those days.

Here is a simple recipe for batter should you wish to make your own.  This batter is also great for onion rings.  A good friend, Joan Lapointe, gave me this recipe many years ago.  She now lives on Vancouver Island. We were neighbours in PMQs in Lahr in the mid to late 1970s and are still in touch with each other today. 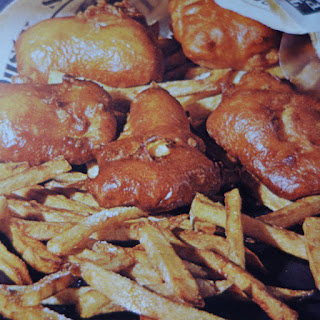 Mix dry ingredients together.  Add eggs and beer.  Beat until smooth.   It is now ready for the fish or onion rings.

(J: I am not sure how much fish this will cover, but it should be enough for 1 pound.)


My method:  Allow the batter to rest for 30 minutes although you can use it immediately.

Fish:  Rinse the fish pieces in cold water and then dry them well.  Dip them thoroughly into the batter so they are well covered.  Deep fry 2 or 3 pieces at a time in hot oil (about 375F/190C on a thermometer) for about 4 or 5 minutes or until golden brown, turning them occasionally.


J:  Another method:  For a lighter batter, just add the egg yolks with the beer to the dry ingredients.  Then, beat the whites until they form unwavering peaks on the beater when it is lifted from the bowl.  Gently but thoroughly fold the egg whites into the egg yolk and beer batter.

J:  There are many recipes for fish batter but this one is simple and quick to prepare.


For onion rings, just dip the sliced onion into the batter until well covered and then deep fry them until golden and crisp. 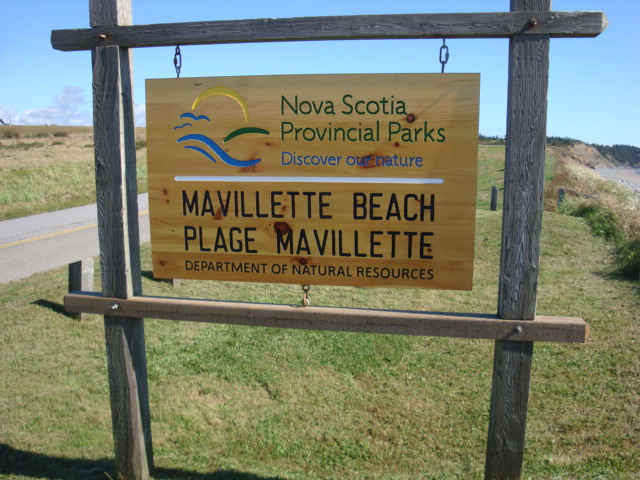 A restaurant at Mavillette Beach on the French Shore, beside Nova Scotia's Bay of Fundy, offers a variety of seafood with a view of the water and the lighthouse. 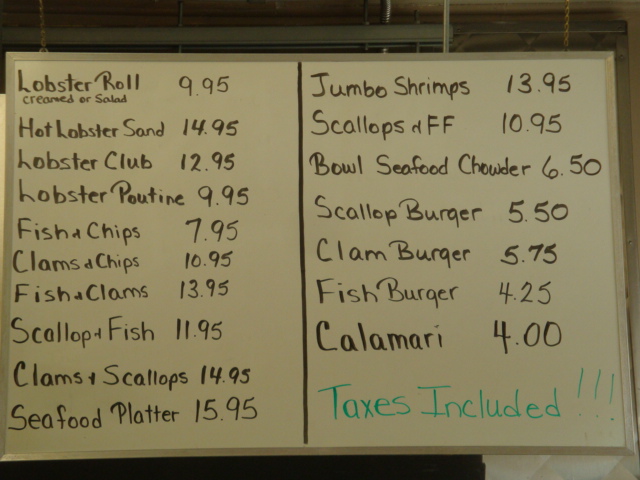 The prices might have changed somewhat from when I was there a couple of years ago, but the food, no doubt, is still very good and plentiful. 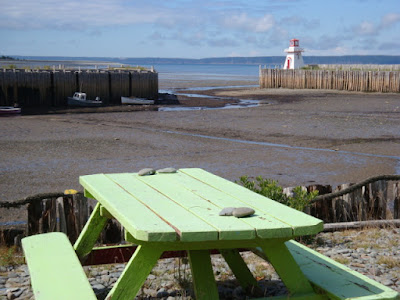 Here I am below at about age 14 in a row boat in the Georgetown Harbour just beyond the shore.  At that time, ships still docked at the wharf in the harbour. 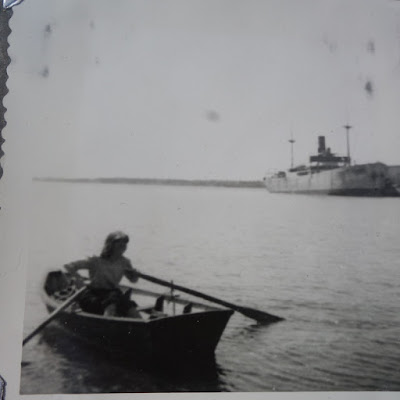 I still remember the tantalizing whiff of fresh-caught sea trout frying in a big pan, greeting me on a summer's morning in my grandmother's kitchen in Georgetown, P.E.I.

My uncles would have caught the fish early that morning.  The butter sizzling in the pan with the trout crackling as it cooked and the wonderful aroma emanating from it were almost unbearable until that first one was put on my plate.

Homemade bread and butter would be served with it.  Perhaps my grandmother served other things, too, but all I really remember is the trout. The flesh was pink and the skin crisp.  That trout would be gone in a flash.  I have always compared every trout with those I had when I was a child visiting in Georgetown and I have eaten many good ones since then. 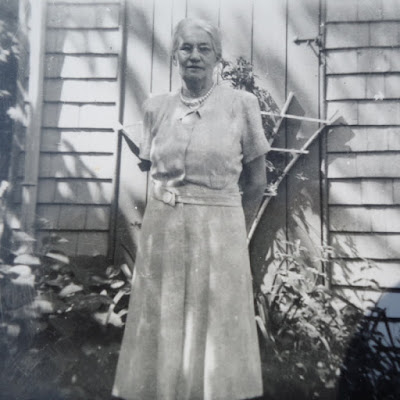 The trout shown below is certainly not from those long-ago days, but a trout I was served at the Restaurant Dammenmühle near Sulz just outside Lahr in our area of Germany.  It does bring back those memories of early summer mornings, though, when the trout was served by my Grandma Tillie. 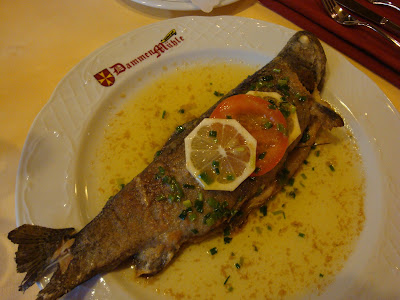 In the Schwarzwald a whole trout, as shown above, is always served with the head and tail intact.  That tells you that it is really a trout that you have been served!

I wrote about trout in my blog post "Two Special Offerings:  Forellen (Trout) and Steak" on December 5, 2010.  As mentioned in that post, trout in the Schwarzwald (known as the Black Forest around much of the world) is usually offered as either Forellen Blau or Forellen Müllerin.  Blau means blue and they usually do have a blue tinge, thus the name.  They are poached in water.  Forellen Müllerin indicates that it is fried or sauteed.

We do have fish at home from time to time.  The two pictures below show recent meals that Hans served:  one of white fish with an herb sauce; the other, on the right, perch with a dill sauce. 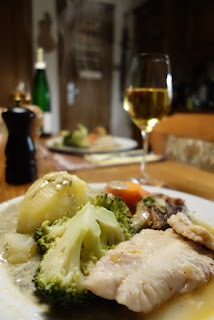 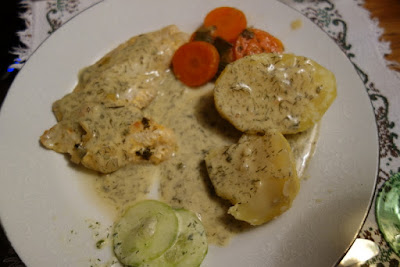 Almonds make a great addition to a trout or white fish, whether served with a sauce or just sauteed in butter.  The pictures below are of a trout filet with almonds, a dish I enjoyed at the Bürgerstuble in Kippenheim. 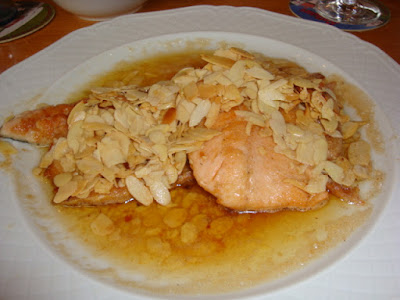 Served with boiled potatoes and a salad, it was a delicious meal. 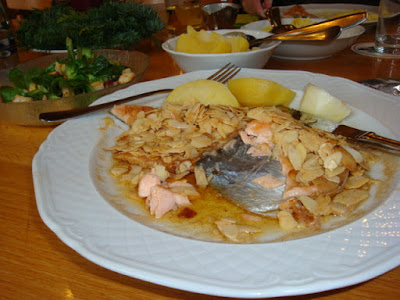 Guten Appetit!
Posted by Janet MacDonald at 6:34 AM