Gathering Places: Food, Drink and Friendship in a Gasthaus or Cafe 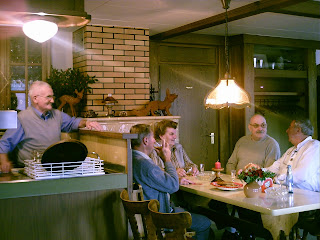 I've been writing about eating and drinking in Germany, particularly about our area of the Black Forest in Baden-Wuerttemberg. Many around the world know only the word "Germany" as that is the English translation for Deutschland. Here, it is called Deutschland, and only Deutschland, though their products say, "Made in Germany"!

I plan to write this in two parts as there is so much to show you about the various eating establishments. I will talk about the Gasthauses, restaurants, cafes, Vesperstuben and Weinstuben, the latter three in my next article or Post. So now, on to "Essen und Trinken" (eating and drinking) and some characteristics of the typical food and drinking establishments found here.
The picture above shows a Stammtisch at a typical Gasthaus, the Deutscher Hof, and one that we know well in Biederbach.  Hans is on the far right side; others are German friends with Herr Burger behind the bar.
.
Gasthaus: This is perhaps the most important of all eating places in Germany, and not just in our area here. It is a place where one goes to eat, linger and to enjoy a glass of wine, beer or Schnaps; to meet with friends or the "locals" for discussions about politics or the latest news. (In France, this would be at a cafe.) The Gasthaus can be simple or elegant, is mostly family-run and might offer rooms for the night. Some advertise outside as follows: "Zimmerfrei" meaning rooms available. If they have rooms but all are booked, you will see the word: "Besetzt" (full). 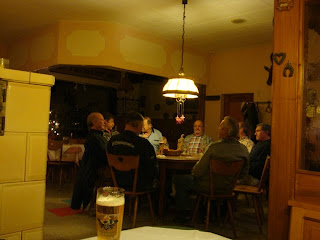 On the right, the Stammtisch at the Kleiner Meierhof in Ettenheimweiler where the regulars sit and discuss the events of the day.
A few serve warm food throughout the day, but generally the eating hours are from about 11 or 11.30 a.m. until about 2 or 2:30 p.m.; and in the evening, from about 6 until 9 p.m. This is flexible, depending on the Gasthaus. However, small meals can usually be had throughout the day, mainly cold offerings such as Schinken (ham), sald and cheese plates or Wurstsalat, a Baden specialty. A few other things such as an egg dish or Bratwurst is often available as well.

Unlike many North American eating places (other than in pubs or taverns), one can stop and have an alcoholic beverage in Germany without having to order something to eat, whether it is at a Gasthaus or at any of the other establishments. Our custom is to drive through our area on a sunny day and stop at one of our favourites for a glass of wine (me) and a beer (Hans). We sometimes do it on a miserable day as well as what can pick up the spirits more than getting out and talking to the Gasthaus owner or someone at the next table, doing the same as we are doing: getting away from the weather! 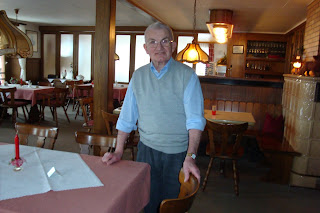 On the left, Herr Burger in the Gasthaus Deutscher Hof in Biederbach, where we go most weekends for fresh Pretzels.


At the top or bottom of a Gasthaus menu, it will nearly always say that service is included. That doesn't mean, though, that you shouldn't tip. I have read articles saying tipping isn't then necessary. But we and everyone we know tip about 10 per cent when we have a meal; if just a drink or two, we either round off the bill to the next Euro or give what we wish to give. Keep in mind that next time or the time after that you will be remembered. Eventually, if you go often enough, you know the owners and they know you. Also keep in mind that alcoholic beverages are not looked upon as tabu, but are readily available in all eating establishments ( grocery stores and supermarkets as well). 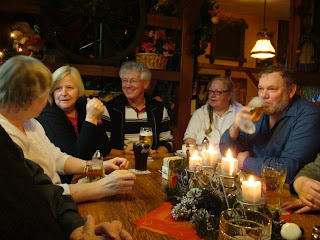 On the right, a group of our Canadian and German friends at the Stammtisch at the Gasthaus Krone in Allmannsweier


Nearly all Gasthauses, simple or elegant, have a Stammtisch (local's or regular's table). It is the large wooden table in the centre of the room, along the wall near the bar or against the fireplace. It is reserved for frequent customers, usually men from the town, but women are often welcome (as I have been), and, unless invited to sit there, one should choose another table.

The Stammtisch will never have a tablecloth and usually it will have a large lamp hanging directly above it. All other tables--nearly all Gasthauses cover them with linen tablecloths--unless with a sign "reserviert" on it, are free and you may sit wherever you wish. It is not unusual to have someone ask if they may join you when no empty tables are available. We ask that ourselves on occasion and often it ends up being an interesting evening. We have met some great people that way, exchanged addresses and kissed and hugged on departing (though I'm sure the wine and beer helped!). Many Germans speak English and others will try, even if only with a few words. Hand signals work just fine even without the language.
In summer, sit outside in their beer gardens as most will have one, usually near the door before you enter. The typical Gasthaus at times can also be called a Wirtschaft or a Gastaette (the latter doesn't usually have rooms available). Its atmosphere is unique, and other than Germany it will only be found in German-speaking countries such as Austria and Switzerland. 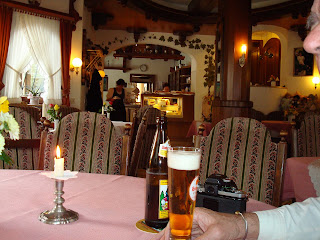 At left, a beautiful Cafe in Brettental, Freiamt, about 20 minutes south of us
Cafe: The cafe is known for its cakes and tortes. Normally you choose the cake or torte at the counter, as that is where they will be, behind glass; it will then be served to you at your table. You can, of course, order any you wish to take home with you and we have done that from time to time as we have a cafe at the bottom of our street. People sometimes ask if I make German cakes or tortes and my answer is always, "No, I can't make them half as good as those at the cafe or Conditorei, so I will continue to buy mine." (A Conditorei is the place that makes cakes and tortes, as a bakery is where they bake and sell bread.) The Conditorei quite often has tables within where you can have something sweet, made there.
You will often find a small menu on the cafe table and can order from that. Some typical items may include ice cream and various sundaes but also such things as a soup of the day, Wurstsalat (a salad of cold processed meat, some cheese and dressing), and maybe even Schnitzel. Cafes will usually have outdoor tables in the warm seasons, often right next to the sidewalk. 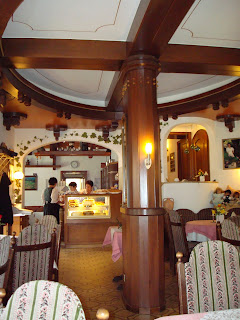 At right, the elegant Cafe at the front with a glassed case of freshly made cakes and tortes.


Cafes, too, can vary from simple to elegant and the cakes and tortes can vary from normal portion size to extravagant. One soon learns where the latter are! One of the best we've had was out in the country, up in the hills and just before going into the forest. It was a farm cafe. We have never seen such huge pieces of cake, though some we've had since then come close.
All cities will have several cafes, including Lahr, the nearest city to us (about 50,000 population and where the Canadian military was stationed for 40 years, until 1994). Generally, though, the smaller the town or village, the more enjoyable the cafe. Not that they'll be less busy, but they'll be less hectic--and the more cake or torte you'll be served!

Posted by Janet MacDonald at 11:56 AM