In several countries, including Germany, the weeks prior to Lent are for celebrating with parades, dances and joie de vivre!  Our area of Germany, Baden-Wuerttemberg, celebrates it in fine style--letting loose and, in some instances, with no holds barred!  In Germany's Rhineland, it is called Karneval, while here in Baden, in the south, we call it Fastnacht.

(A couple of well-known cities in the world, which also celebrate the pre-Lenten period, are Rio de Janeiro, Brazil, where they call it Karneval and New Orleans, Louisiana, in the U.S., where it is called Mardi Gras.)

Above is a typical group representing one of the towns that is taking part in the parade.  This is near the end of our own street.

In Baden, the witch with a broom and special masks, some depicting animals, are emblems, as can be noise makers and various other things representing a particular town's Fastnacht custom.  It is said that Fastnacht is the time in the year when the bad spirits of the cold winter months must be expelled, thus the broom-sweeping witches and the clacking of noise makers.  It is also the time for eating, drinking and merriment before the fasting days of Lent.  (Some witches shown below.) 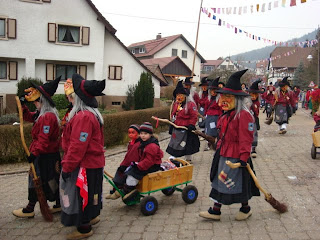 It starts here officially on November 11th on the 11th minute of the 11th hour.  That has been the case since the Middle Ages.  (The same time as for our Remembrance Day ceremony and the signing of the Treaty of Versailles that ended WWI.)  That evening of the 11th, small children, with their parents, parade through the towns holding lighted lanterns.  It also is the day that the executive of the Fastnacht Vereins (organizations) must get to work planning the events to come, though they meet from time to time throughout the year as well.  This year, about a week after New Year's, advertising started for various parades, with the hoisting of colourful cloths in the towns whose parades were coming up. 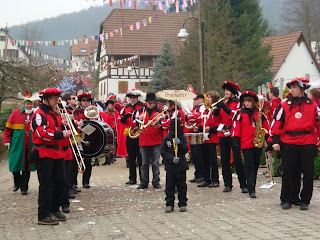 The picture on the right depicts one of the many bands taking part in the parade.

About six weeks before Lent the first parades begin and every weekend thereafter you'll find one somewhere or a special entertainment evening in a tent or hall.  Fastnacht becomes serious on the Thursday before Lent, and from that night on until what we call pancake Tuesday and the Germans here call Fastnacht--the term also used for the entire pre-Lenten period--the streets and Gasthauses are filled with celebrating and band-playing locals  We haven't gone out to any Fastnacht events at night for several years now, but we do still take in a parade or two.

One of the big ones this year was in our own village of Ettenheimmuenster.  We were celebrating the town's 30-year Verein's Fastnacht participation, so it was an important event.  I have never seen so many people in our town as on that day (Sunday, January 24th).  Seventy-one Vereins from that many communities participated in the parade, with a total of 2,500 people walking and marching.  The parade lasted for more than two hours; in fact, it was still winding its way all over the village after the last group passed me by. 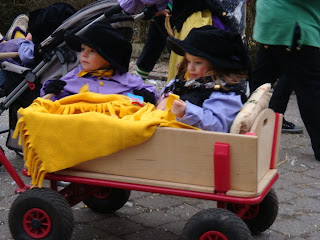 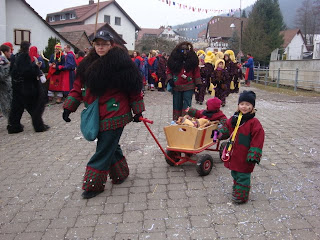 The young and the old, mothers and fathers, babies in carriages and wagons were all part of the parade and all were in costume.  Each town has their own unique dress and masks; the latter are carved by local carvers and can be expensive.  A worthwhile museum in which to see many of these wonderful old masks is in Kenzingen, about 15 minutes south of us.  The masks can be both beautiful and ugly at the same time!


Above and below are some children who are part of the parade. 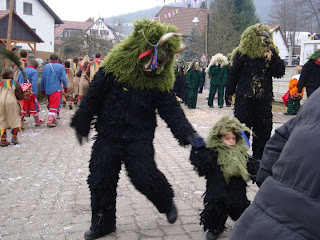 Below are children watching the parade. 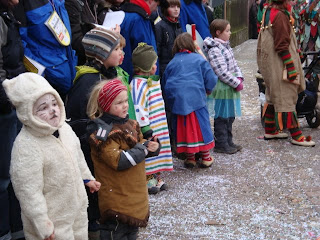 Below, another two groups in the parade. 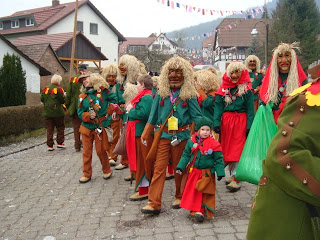 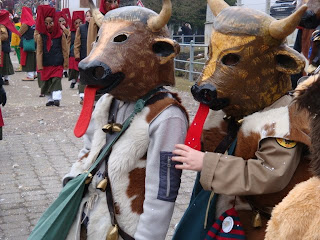 After the parade, I tried walking up the main street.  It was almost impossible because of the crowds milling around, many getting a bite to eat at some of the various food booths--for such things as slices of Flammen Kuchen (pastry topped with sour cream and Schinken or fried bacon pieces), gulash soup, Broetchen (rolls) filled with various types of sausage-- or having a glass of hot Gluehwein to warm the hands and the insides on that chilly day.  Underneath, a group of youngsters enjoying some Wurst (sausages) in a Broetchen. 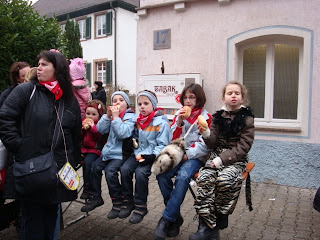 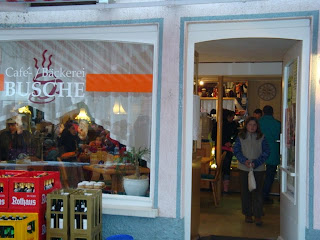 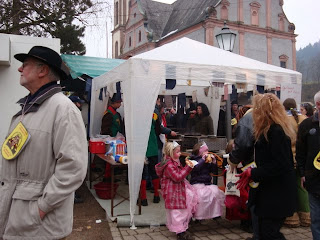 A food tent with our church partly shown at the back and the cafe in town doing some business during the parade and the aftermath.
Some advertising of food offered at the various booths. 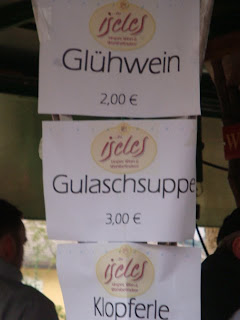 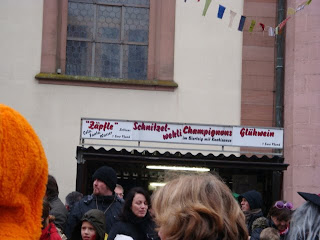 Below right, a view of our church, which is more than 350 years old, on the main street.  It is a pilgrimage church with one of the few Silbermann organs in the world. 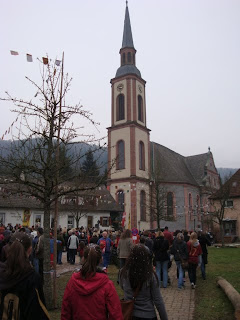 I eventually gave up walking through town and headed back up the hill towards home.  As I approached our house, I caught up to our next-door neighbours, Robert and Hannelore.  He and I are often outside at the same time on Saturdays sweeping up before the weekend.  His remark to me was, "Janet, at least we don't have to do any sweeping today!"
"Thank goodness!" was my reply.  The next morning there was confetti, straw and mess everywhere on the streets below us.  Unbelievable!  But by the end of that day, just about all of it was gone and by Tuesday, there wasn't a sign of what had been.  Some people had been sweeping outside their doors for several hours to get things neat and clean again.
Coming up is the final big week of Fastnacht, which I'll talk about at that time.  It begins with Schmutzigen Donnerstag on February 11th, ends with Fastnacht Tuesday on the 16th, to be followed by Ash Wednesday and the beginning of Lent on the 17th, the day now traditional for us women to be the guests of the men for lunch.
Posted by Janet MacDonald at 1:37 PM