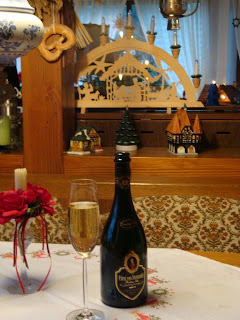 As I write, I am sipping on a glass of what we all call Champagne, but most of us generally drink something other than the real thing.  Mine today is a German Sekt and it is excellent, a 2006 Fuerst von Metternich Riesling, Brut.  See at left.

We opened the bottle last night on our balcony at midnight, poured two glasses and watched the fireworks light up the sky from all directions, while we listened to the church bells announcing the arrival of 2010.  Church bells all over Germany ring out for a good ten minutes or longer every year right at the stroke of 12.

Today, our Sekt still has lots of fizz, as we closed it with one of our Sekt wine corks (made from heavy, pointed steel with a vinyl seal).  Champagne, of course, is the name that can only be used by vintners in France who produce wine within the borders of Champagne--a limited area.  In Germany, it is called Sekt; in Alsace (they have their own sparkling wine), it is called Cremant; in Spain, Cava; in Italy, Prosecco.  Just recently, the Italian government made Prosecco a protected wine name; so, like Champagne, it cannot be used by any other area or country, other than the particular area in which it is produced in Italy.

We began our New Year's Eve simply.  For the first time in a few years, we decided to celebrate at home.  In the last few years we have gone to the Gasthaus Rebstock in the next village, for a fabulous evening which included a cold and hot buffet, Sekt on arrival and at midnight, live music and then fireworks directly outside the Gasthaus, in the heart of the town, as the clock struck 12.  During some of those years, good friends from Canada, who were in Germany visiting, shared the evening as did Canadian friends from Brussels and Ramstein, Germany.

At right below is a view of the hot buffet, which included game, beef, pork, shrimp, various types of sausages, vegetables and so on.  The cold buffet table was just as large. 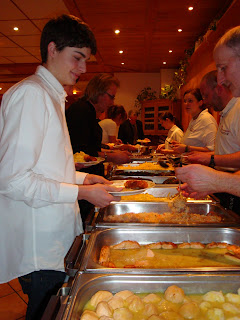 This year, however, we were on our own and at home.  We began at around 7 p.m. with "mousse au canard" (duck mousse or pate) with toast points and my homemade cranberry sauce.  With it, we had a superb bottle of 1993 Hasenberg Rulaender Auslese from Koenigschaffhausen in the Kaiserstuhl, an area about 30 minutes south of us.  This is a rich, heavy wine but it actually felt light on the tongue and palate.  Though heading into 17 years old, it was still perfect and was excellent with the duck pate.

Below left, the duck pate and wine at home; 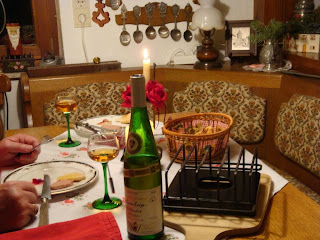 We continued with that wine as we began our cheese fondue.  We had decided we didn't want to fuss this year, as before Christmas and the week heading into New Years we had been out often to Gasthauses and restaurants.  For the fondue we had the traditional French bread but also boiled potatoes (pre-cooked to just the right doneness to spear them easily), cauliflower and mushrooms.  All excellent and enjoyable.

Afterwards, we watched a wonderful two-hour Andre Rieu concert, one of our favourite personalities and performers.  We get many of his concerts throughout the year as he tours Germany often.  We are still trying to get tickets for one of them--hard to get as they sell out quickly.  As his concert ended, the German traditional short program called "Dinner for One" led us up to midnight.  That program is shown on every public TV station throughout the day and evening of the 31st, and we don't know anyone who doesn't watch it!  It has been playing every New Year's Eve for about 40 years and is the most repeated 10-minute play in the world.  It is hilarious and, by the way, it is in English only!  (All public television is commercial-free during the programs.)

Today, New Year's Day, as every year, we watched the live Vienna Philharmonic Orchestra concert.  It is a superb event.  It started at 11:15 this morning and continued for two and a half hours.  It would likely be shown on public television in North America and perhaps not live, but recorded.  It is well worth watching if you love music and, in particular, music by Strauss (both father and son).  The last two orchestra renditions were "Die Blaue Donau" (the beloved "Blue Danube") and the "Radetzkey March," both of which brought down the house. 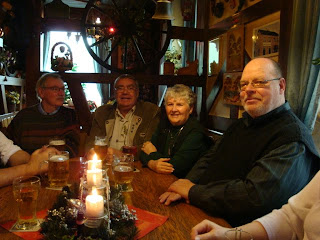 The source of the Danube (Donau in German) is just outside Donaueschingen, in Germany's Black Forest, about an hour and a half east of us.  What became a great river began very small, winding its way eventually through much of Europe.  From its source to the Black Sea it covers close to 3,000 kilometers.

Before the weekend began, we met with Canadian and German friends for lunch and to wish everyone a "guten Rutsch," a German saying that translates as "have a good jump into the new year!"  We met at the Krone in Allmannsweier, the local Gasthaus where the men meet each week.  A couple times of year, though, we women join them.  See a few of the group at left, including me.

Ellie and her husband, Peter, run the Gasthaus and she does all the cooking.  Ellie does not understand what "small" means!  You can ask for a small portion, but she doesn't hear!  It is always too much--at least for me and Hans.  Every week he takes half home.  This past Wednesday I ordered a Feldsalat and Camembert.  The latter was on the side and came with toast points and cranberry sauce.  Feldsalat is a specialty here in late fall and winter and my favourite all-time salad.  It reminds me a bit of baby spinach salad, though Feldsalat has small dark green leaves grouped together on one stem with many of these on the plate.  We have it at home occasionally and it takes quite a bit of cleaning to get the sand/soil out of it.  It grows throughout the winter out of doors.  If available in North America, I think it might be what is called lamb's lettuce.  The dressing for it is made from mild vinegar (one of best is Melfor Essig), good oil, salt, pepper, some chopped onions with croutons and often fried Schinken (bacon bits), or perhaps walnuts or other nuts sprinkled over top.

One of our friends takes Melfor vinegar to Canada with her every year when she goes to stay for a few weeks.  I remember taking a similar one--a case of it--to Canada in the mid 1970s when we were posted back to Winnipeg from Germany.  If you can't find mild vinegar, dilute the one you use with water.

Another specialty here, specifically at New Year's, is the pretzel--not the small, crisp sticks but the soft chewy large type.   Twice we have received one as a gift from Monika and Martin Grimm who run the Gasthaus Engel in Doerlinbach, along with his mother and brother, Ulrich.  Monika makes several pretzels every New Year's.  (The one below, a gift to us, is on a large baking pan and a good handful for one person to carry.)  They are meant to be eaten on New Year's Day. 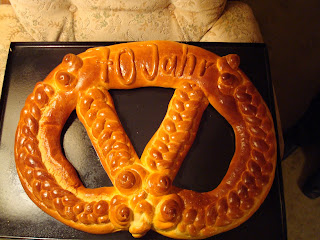 May we all have a happy and more peaceful 2010!

Posted by Janet MacDonald at 1:40 PM