All About Schinken--The German Way with Ham 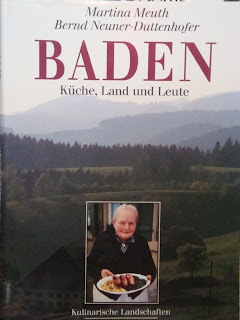 Germany has many specialties as a whole, and here in Baden-Wuerttemberg they are numerous.  This province is the second most popular tourist destination in Germany and is renowned for its cuisine.  Many visitors come to Baden on holiday for that reason alone; also, of course, for the beautiful scenery of the Schwarzwald--the famous Black Forest.  (Berlin is the number one destination, as Germany's capital city.)  Of the 190 or so restaurants awarded Michelin stars in Germany, 52 of them are in Baden-Wuerttemberg.
Today, though, I will talk about a specialty that is more often ordered in a Vesperstube or Gasthaus than in an elegant starred restaurant, even though it might also be available in one.  That specialty is Schinken (ham).  Classical "geraeucherte Schinken" (classical smoked ham) is a traditional German food specialty.

The picture at right shows one of my books on German cooking, its land and its people.  The lady on the cover ran a Gasthaus about 25 years ago, and that is where we met her. She was 80 years old at that time.

Hans is my expert on Schinken, so I went to him to get the facts.  Choosing a properly fed pig is the most important basis when it comes to eventually having good Schinken or ham.  Unless the Schinken is produced by a large manufacturer, where they do the smoking and curing throughout the year, it is generally produced only during the cold months of the year by private farmers.  It will keep in a cool, dry room for up to three months.  Keeping it in the fridge has a tendency to turn it salty, though it will still be fine to eat.

The picture below is of one of my cookbooks and shows a large piece of Schinken, white asparagus and wine. 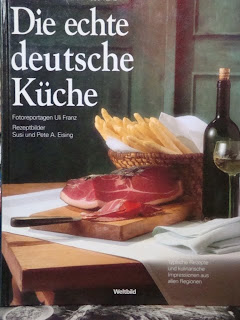 Schinken is cured with salt and various spices for a minimum of three to four weeks, with each producer (or farmer) having his own well-guarded recipe.  After the curing, it is then cold-smoked with various types of hard wood, spruce boughs and spruce cones--and, at times, with sawdust--for four to six weeks.  It is then air dried for up to three months, so it is a lengthy process.

A good Schwarzwaelder Schinken (Black Forest ham) is usually recognized by an almost black outside surface.  Good Schinken Speck should be two thirds lean and one third fat.  Speck is normally eaten with the fingers along with bread--or used as one would bacon, frying it to add to a recipe.  In the old days, the saying went as follows:  no fork, no butter, no napkins!  (One was expected to wipe the fingers on his or her bread!)

The traditional way to serve Schwarzwaelder Schinken is as a piece of approximately 150 to 200 grams in weight and served on a wooden board with a special sharp Vesper knife only. You then slice it thinly into small pieces and eat it with your fingers, accompanied by bread. 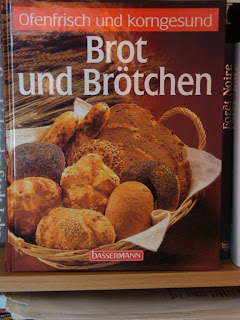 The bread served with Schinken is often baked in special wood-fired bread baking ovens.  In North America, the normal bread found there will not be suitable.  Look for a German baker who bakes the traditional German hearty bread.

Bread and Broetchen are featured on the cover of this cookbook.

A friend of ours some years ago ordered Schinken.  It was served on a wooden board along with a sharp knife and some rye bread.  Mini placed the Schinken on the bread, folded it as for a sandwich and began to eat--except, she found it hard to chew!  We watched her struggle with it.  It's not that the smoked Schinken was tough!  It was too thick for a sandwich and should have been sliced into small pieces and eaten with the fingers.  Her remark at that moment:  "What in heck are they serving in this country anyway?"  (It was a somewhat stronger version!)  After Hans realized Mini was struggling with her piece of Schinken, he explained how it should be eaten.  We still laugh about that.

Shown below, a piece of Schinken that Hans had at home. 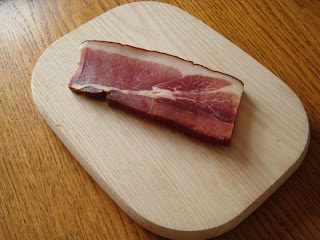 He has had people on both sides vehemently take a stand:  Some say definitively that one cuts from the fat downwards.  The others say, "No, no, no, it's from the lean side towards the fat!"  Hans cuts it from the fat side downwards towards the lean  side.  He says that makes more sense as the fatty part of the Schinken will not tear away with that method.  That makes sense to me as well as it is easier cutting away from the fat than into it. 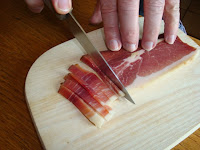 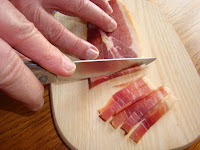 Hans demonstrating how to slice a piece of Schinken.  Be sure to cut the rind away from the fat first.


Most people drink beer with Schinken--though a few prefer wine--and along with it a glass of Kirschwasser or other Schnaps, which is good for the digestion.  (Try it after a heavy meal; it works.)

A Vesper usually consists of cold dishes, though egg dishes and toasts--various toppings and cheese atop the bread and then broiled--can be offered as well as Bratwurst.  The word "Vesper" means a late afternoon or early evening small, but hearty meal.  In former days--and still the case for some families--Mittagessen (noon dinner) was the main meal of the day.  The evening meal, or Vesper, was smaller, perhaps a bowl of soup, but normally some Wurst (cold cuts, ham)--including Schinken and sausages--some cheese and bread.  As most Gasthauses don't serve warm meals until 6 p.m., many people order a Vesper after an afternoon walk. 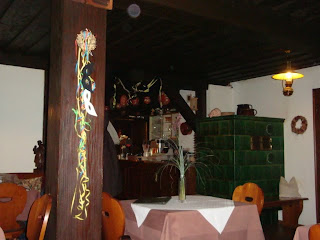 This past Sunday we drove to  the Gruenen Baum (the Green Tree) in Keppenbach, 35 minutes southeast of us.

An inside view of the Gasthaus, at left.

Hans always has a Vesper there and swears it is the best in the area.

Below, another view with our table in the foreground. 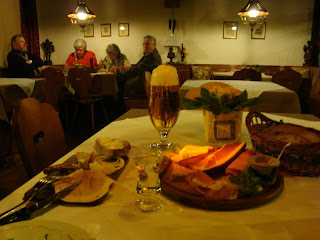 The Vesper itself comes on a round board with a smaller board on which to place what you wish to eat at the moment.  Not all Gasthauses or Vesperstuben serve it that way, but they do at the Gruenen Baum.  (I always have steak with a spicy and delicious sauce, along with her excellent Pommes Frites, also the best in the area.)


The two pictures below show what Hans was served. 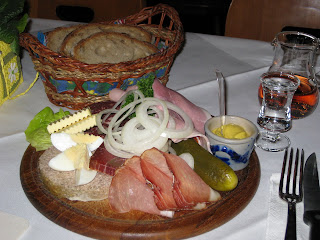 Above:  Note the mustard in the small pottery dish, butter on the lettuce leaf, the halved cooked egg, the pickle, onions, and several types of Wurst, with thinly sliced Schinken in the forefront.  The glass of Kirschwasser on the right and my wine pitcher, holding Weissherbst wine, in the background.  And note, too, the large basket of farm-type bread.
Below, The Wirtin's (owner's) perfectly poured Pils and a large piece of Schinken on the round wooden board that Hans will slice into small pieces on his smaller board. 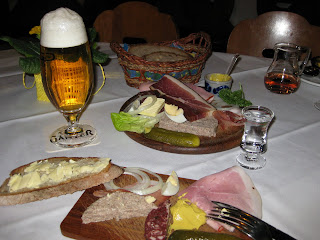 Each Schinken produced, whether by a large commercial producer or by a farmer, will be distinctly different in taste and texture.  Look for very firm, dark red Schinken with an intense smoky aroma when wishing to buy your own.  Apart from smoked Schinken (the classic), there are many varieties, including cooked, slightly smoked and air dried.  (The Italian Parma--prosciutto--remains raw and unsmoked; it is salted only and then air dried for 15 to 18 months.)
Smoked Schinken types are usually differentiated as Black Forest, Westfalia and Holstein.  Bavarian and Austrian Schinken are somewhat similar. Westfalian and Holstein Schinken are usually served thinly sliced on slices of buttered bread.  In general, the Black Forest types of Schinken have a more intense taste than the others, which are somewhat milder.
Below, a huge Vesper celebrating Hans's birthday with family and friends in Keppenbach on another occaasion. 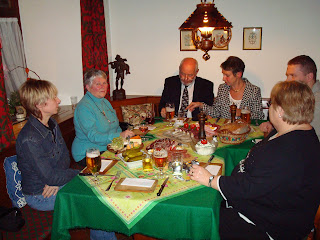 For those who love Schinken, visit the Schwarzwald and try it at different Gasthauses along the way.  Be prepared to take some with you when you leave, though, as the servings are generous.  Hans always takes a good quarter to half home with him.
A note:  To enlarge any of the pictures, just click on them.  To return to the blog, click on the arrow at the top left corner of the page.
Posted by Janet MacDonald at 12:53 PM