We had booked a table for five at the Rebstock in Munchweier, just a kilometer from home.  The Rebstock Gasthaus is known for its Schlachtplatte evening buffets.  They also sometimes offer Schlachtplatte at noon hour--with table service instead.  Tonight they would serve us at the buffet table.  We waited with the rest of the guests--a full house--for the evening to get underway. 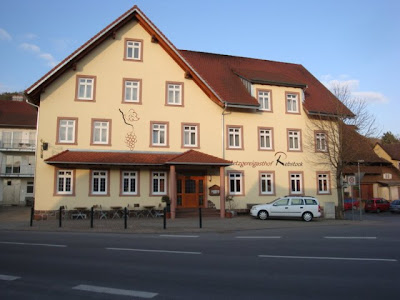 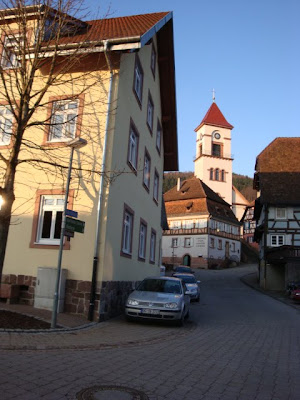 The actual name of the Gasthaus is Metzgereigasthof Rebstock.  Attached to the Gasthof is a Metzgerei (butcher shop).  That can be attractive to potential customers or guests, as the meat dish one might want to order for dinner inside the Gasthaus will be fresh and more of a variety will often be available.  If you are buying meat at the butcher shop to take home, the Gasthaus is right there to stop in for a quick beer or glass of wine or a few minutes' discussion with the regulars at the Stammtisch (locals' reserved table).

The view below is from the outside of the Metzgerei, showing their window decoration and the building across the street mirrored in the glass. 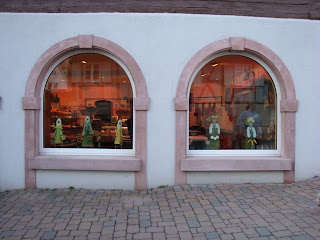 The picture at right and left, below:  views of the inside of the butcher shop. 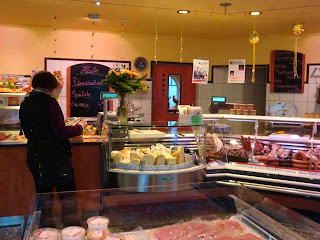 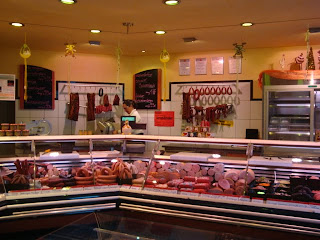 The Gasthof Rebstock has been in the Kollofrath family for 150 years.  The present family owners are brothers, having taken it over from their parents some years ago.  (Their parents are no longer alive, but their mother was still cooking in the Gasthaus kitchen at age 80, about three years ago.)  Both brothers are cooks as well as Metzgers (butchers).  One of them runs the kitchen and does most of the Gasthaus cooking, and the other runs the Metzgerei (butcher shop).  For their well-known buffets and party service, they work together.  (Here in Germany Metzgers learn cooking as well as butchering.) 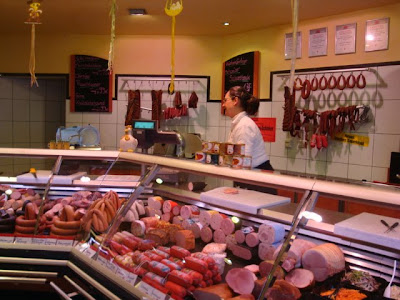 The present Gasthof was re-built in 2004 on the same site as the original building, which was partly torn down to make way for its replacement.  It is a hotel as well, with all the conveniences.  As it is only about eight kilometers from the Autobahn, many of its guests are holiday travelers, business people and salesmen traveling north or south through the country.  (That Autobahn, the A5, is one of the busiest in all of Germany.  It starts on Germany's southern border with Switzerland.)

Below:  a close-up of the various sausages; on the right, the cheese 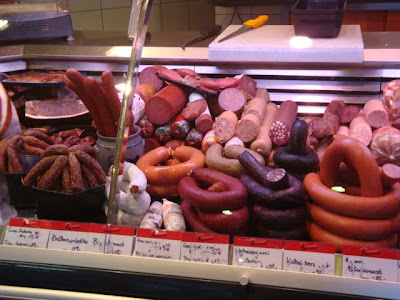 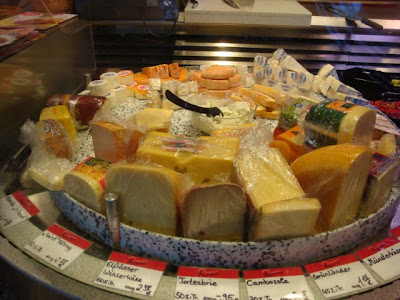 The picture below left is of the brother that runs the kitchen and does most of the Gasthaus cooking along with assistants, including a young family member. 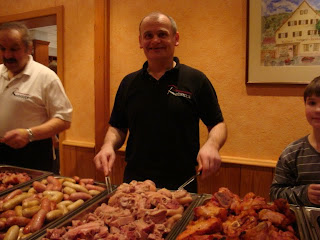 Schlachten means to butcher.  In the old days, Schlachtplatte was served only during the cold months due to lack of refrigeration.  Traditionally it is still
served during that period of November through March.  In Baden-Wuerttemberg, Schlachtplatte is a specialty and consists of a plate of Sauerkraut and sausages.  Various Gasthauses advertise it with brochures found inside the Gasthaus, on blackboards placed outside the door, on their web site, and often in the Saturday papers.  We saw it in a brochure at the Rebstock when we stopped in one afternoon.
Below, the brother who runs the Metzgerei (butcher shop) and the young teen who was helping out, a family member. 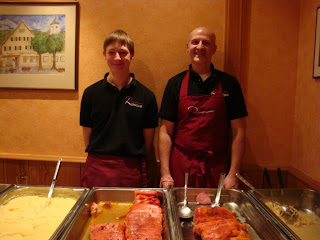 While awaiting the start of the evening, the five of us enjoyed our drinks (wine and beer) and watched the room filling up.  At 7 p.m., two huge pots of hot Metzelsuppe were ready for everyone to serve themselves.  The soup is made from the broth in which the sausages are cooked. The sausages that have burst become part of the contents of the soup.  I was careful not to take too much because I knew what was awaiting us at the buffet table.  I had also never tasted this type of soup before and wasn't sure I would like it.  I was pleasantly surprised as it was delicious!
The serving bowl of Metzelsuppe 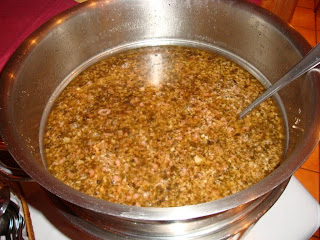 Monika serving herself some soup 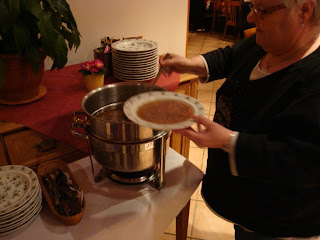 The Schlachtplatte
Sauerkraut is always part of a Schlachtplatte and an important part.  The Rebstock's was very good:  not too sour and not too mild.  It was just right.  White wine (usually a Riesling) is nearly always added to it while it is cooking; in fact, I don't remember ever having Sauerkraut that didn't have wine in it.  The buffet this particular evening consisted of ten or more various meats, sausages and accompaniments and the servers behind the table wanted us to try it all!  One of them was a young boy and another, a young teen.  Those children, of course, were members of the family, and it is not unusual for kids to help out in a Gasthaus in Germany, including sometimes serving the beer and wine.
Guests at the buffet table
(the two brothers--in black--serving) 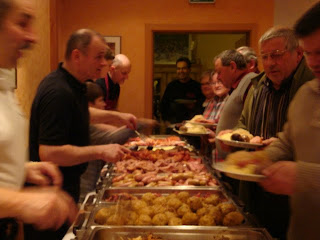 Another view of the buffet below left 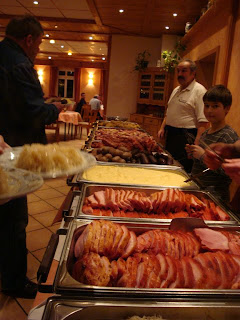 Along with the Sauerkraut were Leberwurst (liverwurst) and Blutwurst (blood sausage).  I like the first, don't eat the second.  Hans and almost everyone else enjoy both.  Those two types of sausage will nearly always be served, and Kesselfleisch (pork with a fair amount of fat in it) will be as well.
There is more to Schlachtplatte than Sauerkraut and sausages.  Many Gasthauses offer other meat dishes as well--as does the Rebstock.  Some will serve only the traditional Schlachtplatte of Blutwurst, Leberwurst and Kesselfleisch accompanied by Sauerkraut and potatoes.  This night, along with the traditional fare, were the following:  Bratwurst (another type of fried sausage); Haxen (pork hock); Schaeufele (slightly smoked pork shoulder), ribs (not barbecued!); Fleischkaese (looks like bologna, but is thicker and much better); Leberknoedel (liver dumplings); pureed potatoes and sauteed (fried) Sauerkraut along with the regular Sauerkraut.  The food was superb!  I didn't take half of what was offered and neither did Hans; even then, we were both too full to go up for seconds.  Others had no such problem.  The food was hot and plentiful the entire evening.
German Schlachtplatte vs Alsatian choucroute garni
Schlachtplatte and choucroute garni are specialties in their own regions and both are excellent.  I prefer the German Schlachtplatte to the renowned specialty of the Alsace in France.  My main reason is that in Germany they generally serve mashed or pureed potatoes with it instead of boiled potatoes as they do in Strasbourg or elsewhere in Alsace.  (I like the pureed potatoes with the juice from the Sauerkraut over them!)  Also, in our region you are often served more than just sausages, and I like that as well.  Others, of course, might prefer the Alsatian rendition.  You do get a wonderful assortment of sausages in the Alsace, including some not usually served in Germany.  Hans loves both the German and Alsatian equally he says.  Should any of you ever go to the Alsace in eastern France, choucroute garni is a traditional meal there, a specialty and a must to try.  In Strasbourg and elsewhere in Alsace it is served throughout the year.  The Alsatians usually use Riesling wine in their Sauerkraut, but they sometimes use Sylvaner instead.
Often on the Alsatian menus you will see Choucroute Garni Royale offered.  The sausages, potatoes and Sauerkraut are placed on the platter and then a small bottle of Champagne is poured over it all.  The "Royale" will be more expensive than the usual choucroute garni but worth the extra cost.
Hans' and my plates with our choices (he ate my blood sausage!)  Mine at bottom. 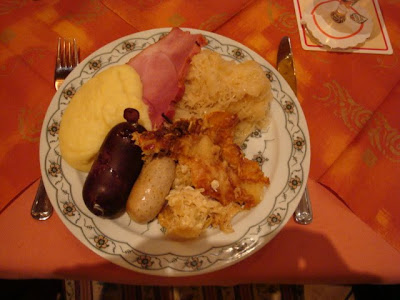 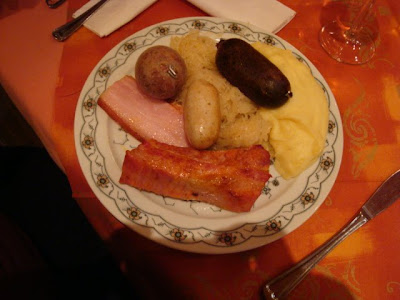 Hans says that many Canadians do not like Sauerkraut as they use it directly from the can without adding anything to it.  Try Hans' recipe, which follows.
Hans' Sauerkraut
Here is how Hans cooks his Sauerkraut for Schlachtplatte at home: (For six people)
*1 to 2 jars or cans of Sauerkraut (about one and a half kilo).  In Canada, he uses Hengstenberg or Kuehne.
1 bottle of dry Riesling; approx. 4 bay leaves; 10 juniper berries; l large onion, very finely chopped; approx. 2 to 3 Knorr chicken cubes; approx. 1 tablespoon sugar; 8 to 10 peppercorns; 2 tablespoons of goose fat if you can buy it--a must for Hans here.  (We save the goose fat from our Christmas goose and freeze it to use in cooking later.  We can also buy it at grocery stores in Germany.  Hans has seen it in large supermarkets in Nova Scotia and in German delicatessen stores.)
*Taste the Sauerkraut in the can first and if it is too sour, put half the can of kraut into a large sieve and for 10 to 20 seconds run cold water over it; let it drip out of the sieve.  Mix it with the remaining Sauerkraut and taste it again.  If still too sour for your taste, rinse it quickly again.  Today, most Sauerkraut in the jars or cans is fine as is and won't need rinsing.
To cook:  Place all the ingredients in a large saucepan and cook on top of the stove for about an hour.
Note:  You will have noticed in all of my articles that I capitalize many German words, even when some of those words are common in English (such as Sauerkraut).  In German, all nouns are capitalized, so I generally do follow that when using a German word.
Posted by Janet MacDonald at 9:50 AM