Beer and Its Many Aspects--Part One 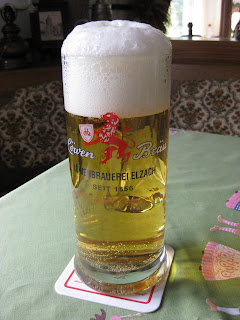 A well-presented beer!
I am not a beer drinker.  Hans, though, is a beer connoisseur and knows much about it and the industry.  He is my expert today.  Hans has been drinking that frothy beverage for years, but he also took a correspondence course in beer brewing for a while many years ago, read beer magazines over the years and anything else relating to it as he still does today--plus talking to anyone who makes, sells or serves beer!

Since I have known him, he changed from "only-a-beer" drinker to a wine drinker and connoisseur (particularly Bordeaux wines), making himself smart on that subject, too.  I'll use that expertise at a later time when I write about wine.  Today, though, it is all about a beverage that many love throughout the year and especially on a hot summer's day.

Below, Hans' brother-in-law, Günter, "prosting" with Hans (unseen except for the tip of his beer glass). 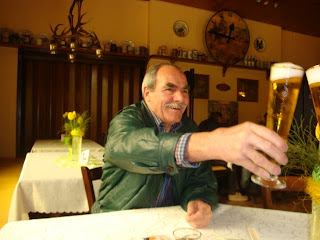 The picture below right is of Hans in Sasbach under a chestnut tree just coming into leaf, at a beer garden beside the Rhine, with France just across the river.  Many beer gardens and Gasthäuser offer fresh pretzels, which go perfectly with beer. 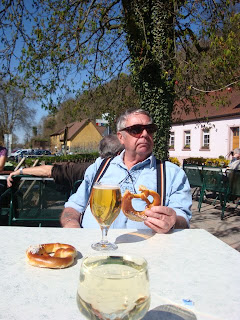 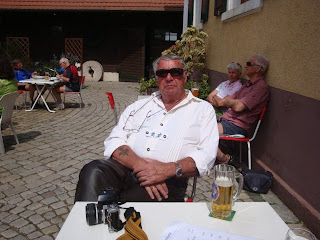 The picture at left is of Hans in another beer garden in the countryside.  This was on a Sunday afternoon and the place was busy.  There were tables and people everywhere, but this was a quiet spot.


In the 1980s and early 1990s, Hans bought his kegs of beer from Kälble Braurerei in Steinach.  When Kälble closed down their brewery--selling all their equipment, including copper brewing kettles, to someone in California--Hans began the search for another small brewery that would come up to the same standard.  That is when he discovered the Löwenbrauerei in Elzach.

The picture at left shows the area in front of the Löwenbrauerei with cases of bottles filled with beer to be delivered to some of  its customers.  You can see the copper brewing kettle inside with one of the brew masters working beside it. 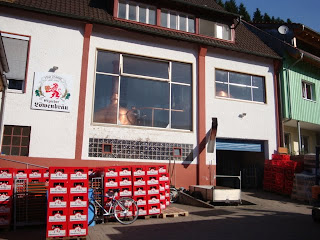 Hans has been buying his Pilsener-type beer at the Elzacher Löwenbrauerei for the last 15 years and swears it is the best Pils in the world!  Many agree with him.  Johannes Dold, the owner and brew master, has won gold medals in Germany every year for his various beers including this year:  2010.  He won the "best-of-the-best" in Germany in 2007 and many other awards since. The "best-of-best" goes to a brewery that has won 2 awards for their beer every year for 15 years.  A special prize indeed!  This is a small, private, family-run brewery, which means that it was a huge honour to receive such a prestigious dedicated award. 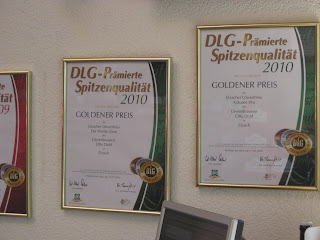 Some of  the Löwenbrauerei's awards shown on the wall inside their retail store. 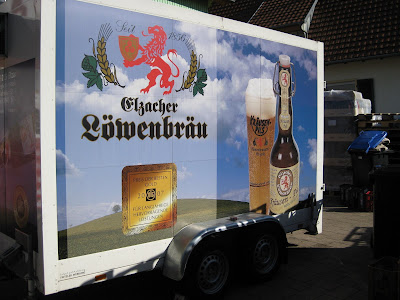 The brewery celebrated its 150-year anniversary four years ago:  1856 - 2006.  Johannes Dold took it over from his father in 1995.  It has been in the same family for those 154 years.  That's not such an easy undertaking these days in the beer business as large brewing monopolies are usually waiting to take over these small breweries.  In fact, this is a negative development occurring in Germany and many other countries, including Canada and the United States.
Johannes and Luzia Dold (with Hans' hand talking!) 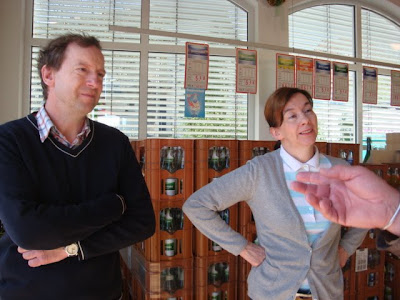 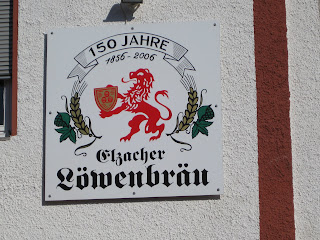 Approximately two decades ago there were far more breweries in our region than at present.  This holds true for all areas of Germany; however, the province of Bayern (Bavaria) still far exceeds the number of small breweries than anywhere else in the country.


We hope that Herr Dold's brewery will remain as a family enterprise, as hundreds of private breweries have closed or been taken over in the past number of years.  Herr Dold's wife, Luzia, looks after the administrative side.  His daughter is now studying the brewing business.  That is a positive side to their craft and will hopefully lend continuity to the family brewing heritage. 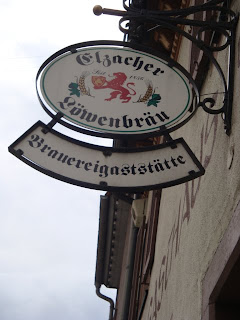 The sign at right is on the Brauereigaststätte (Brewery Gasthaus) in Elzach.  It is owned by Herr Dold of the Löwenbrauerei.  Most Gasthäuser show the name of the beer they carry on the Gasthaus name sign.


Elzach, where the brewery is located, about a 35-minute drive southeast of us, is a typical Black Forest town.  Several Gasthäuser and shops line the narrow and picturesque main street.  Fifteen minutes north of Elzach is the village of Biederbach and the Gasthaus Deutscher Hof, where we go frequently.  Herr Burger, the Wirt (inn keeper), for years had only Riegeler beer on tap.  He now also has Löwenbräu (mainly because of Hans, I should add!).

Another Gasthaus we know in Freiamt also now carries Löwenbräu and their customers are ordering more of Herr Dold's beer than the original beer they had been carrying.  The Elzacher Löwenbrauerei also supplies its beer to several other Gasthäuser in the area.  Herr Dold has a few employees working for him, including another brew master.  He also has a retail store directly beside the brewery where one can buy his various beers, by the keg or bottles, including numerous soft drink products.
The retail store beside the brewery, with me standing near the car 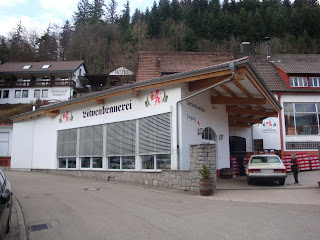 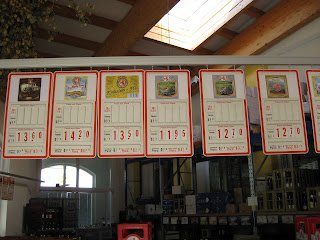 The picture at left shows signs with the cost for various cases of beer (20 half-liter bottles to a case, which equates to 71 Euro cents a bottle at Euro 14.20 a case--the most expensive beer offered; that's about 56 Canadian cents per 1/2 liter bottle--depending on the currency fluctuation rate).

We have a small beer fridge that will hold a 15-liter keg of beer.  Hans prefers Pils which he has on tap at home.  The story of his fridge goes back to 1980.  A friend of his, Ernst, who owned a Getränkemarkt (a store that sells all types of drinks:  beer, wine, Schnaps, soft drinks, mineral water), found the fridge on the side of the road on household bulk refuse day.  He picked it up and took it home, then called Hans to see if he was interested in it.  Hans was.  It cost him nothing.

The fridge was from the 1950s and didn't work.  A German acquaintance of Hans at the Canadian Forces Base in Lahr offered to fix it for him, which he did for a small token (a gift of a bottle of Canadian whisky!).  Hans then installed a beer tap and associated carbon monoxide delivery system, covered it with a solid piece of varnished wood and painted the fridge a more appropriate colour.  That same fridge is still going strong today, 30 years later, with a keg of Elzacher Löwenbräu Pils in it--as it usually has!

Below, pictures of the outside and inside of the fridge with the keg hooked up (and a bottle of Weissherbst beside the keg, my favourite wine!) Note the Elzacher Löwenbräu sign on top. 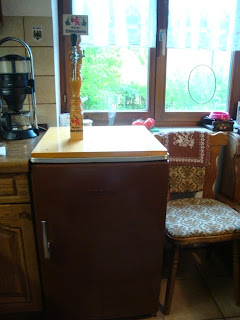 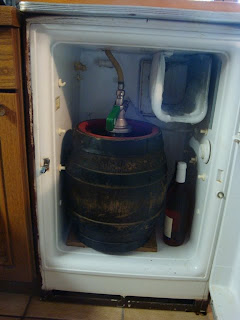 The three pictures below show Hans pouring a glass of Pils.  A Pils is topped up slowly, so that in the end a good "head" almost overflows the glass.  You press the tap once and then not again until the foam settles down.  Then you tap it again.  You do this until the beer is at the proper height in the glass and the frothy head is well above the rim of the glass. 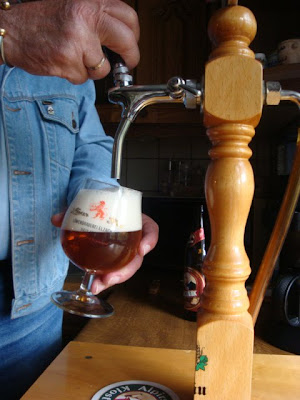 The picture below, on the left, shows the foam after pressing the tap; the picture on the right shows the Pils to be nearly ready, with the foam or head now slightly above the rim. 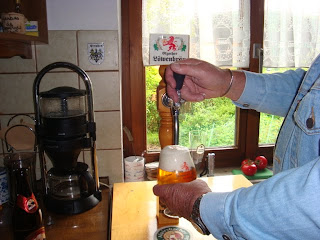 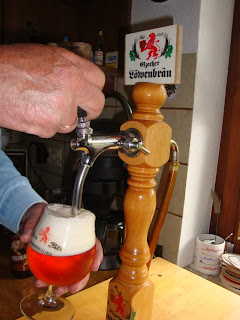 Beer is a matter of taste, which means each person has his or her favourite type and brand of beer.  Pils is made with more hops and less malt than Export, thus it is slightly more bitter.  Hans says that when he first moved down to Lahr from northern Germany with the Canadian Forces in 1970, nearly everyone in this area drank Export.  It is still the most popular beer here.  Pils was not common in this area, though it was the most common type of beer in northern Germany.  Now, of course, nearly all Gasthäuser and restaurants serve all three:  Export, Pilsener and Weizen (wheat) beers.  The Elzacher Bräuererei brews all three, plus a Jubilium's beer in winter. They also brew a Kräusen Pils which is an unfiltered beer with a unique and very pleasant flavour.
Pils (a lager beer) takes its name from Pilsener, which was first brewed in Pilsen (Plzen), Bohemia (now the Czech Republic) in the 1800s.  That is what Hans will usually have when at a Gasthaus and nearly always at home.  One exception to that:  when he is very thirsty and wants a quick beer, he orders an Export (also a lager beer but with less hop flavour).  A glass of Pils is topped up slowly and the old saying is that you wait seven minutes for it to be ready.  On a hot day, that seems like a long time for someone waiting to quench his or her thirst!  Hans, of course, when he orders an Export, also orders a  Pils at the same time--to have seven minutes later!

What can be better on a warm, sunny day for a beer drinker than such a Pils as shown below, ready for the first taste! 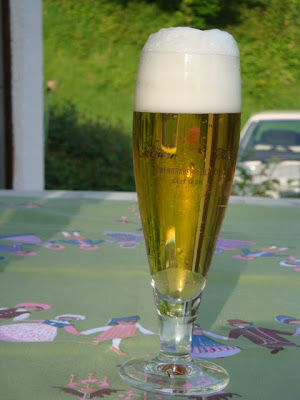 A note:  I will be posting "Part Two" on beer in the next couple of days.  That will be about the brewing process itself and the ingredients used in Germany, with pictures from inside the brewery and the retail store.

A reminder:  To see the pictures in a larger format, with more clarity, just click on the one you wish to look at.  Click on the arrow on the top left corner to return to the blog.

Posted by Janet MacDonald at 11:59 PM