The Days of Christmas 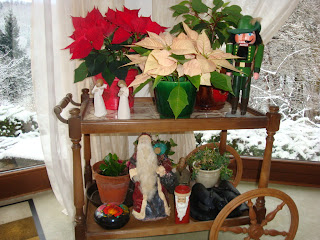 During those days leading up to Christmas the aroma of baking wafts through the house.  Decorating the house inside and out with our two cats underfoot starts on First Advent weekend and finishes on the 24th, with cards and letters to friends and family written at the kitchen table from late November onwards.  In the last week before Christmas we buy our scallops for Christmas Eve supper and the goose for Christmas Day.  During those last weeks, we enjoy many outings to fine restaurants and family Gasthäuser, with good food, good wine and good company.  As it is for everyone, a busy time of year.

Here are some of our highlights this past week or so: 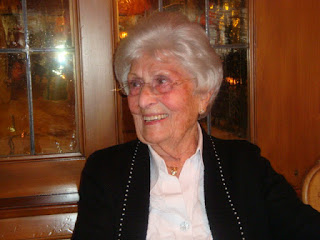 On Fourth Advent Sunday we picked up our friend Lina in Freiburg and headed to Glottertal, well known for its many beautiful restaurants and Gasthäuser and one of our favourite places in which to dine.  Some years ago now I counted fourteen restaurants (perhaps even more today) in that small town of about 600 residents.  It is situated about twenty minutes northeast of Freiburg, a university city of about 150,000 people.  On any given day or evening, many of the guests will be from that city.  Glottertal became known all over Germany and elsewhere in Europe in the early 1980s because of a television series, "Die Schwarzwald Klinik," filmed there.  Of course, the town has always been renowned for its hotels and restaurants, its food and wine.  Many Canadians stationed here in Lahr knew it well. 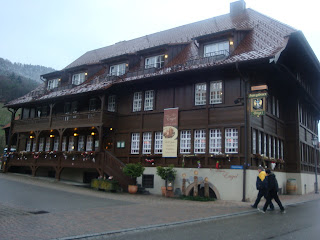 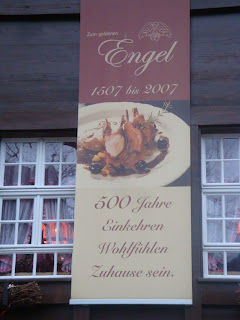 On this occasion, we went to Zum goldenen Engel, a Gasthaus-Restaurant in the Black Forest Style:  red and white curtains on the windows, the waitresses wearing Trachten and with many lovely decorations inside and out.  It is a very old Gasthaus, one of the oldest in the town, dating back 500 years.  Its wooden floors and ceiling, soft lighting, tables topped with sparkling white linen, candles and glasses along with the friendly owners and staff, welcome one to come in and enjoy the ambience, good food, wine and other liquid refreshments. 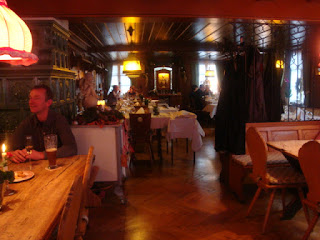 The picture at left shows one of the rooms with the Stammtisch at the forefront, left.
We had not reserved ahead as we weren't sure about the weather beforehand.  It was becoming colder and snow was in the forecast.  Fortunately, the roads were fine that day.  On a Sunday in Glottertal or almost anywhere else where there is good dining, it is recommended to book a table.  Luckily, two tables were free, the only two in that huge restaurant as all the rest had been reserved. 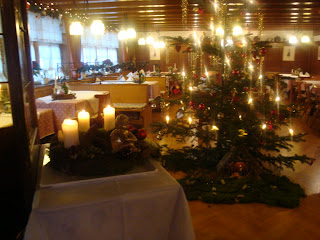 On the right, another of the rooms.  This was 4th Advent Sunday but only three of the candles are burning as the one behind had burnt itself out!

We sat near the bar, where one has a great view of the Gasthaus, the guests, the food and drinks being served.  We were also close to the Stammtisch, where on that morning (it was just before noon hour when we arrived) some of the elder men from the town were enjoying glasses of wine before heading home for Mittagessen (their midday dinner). 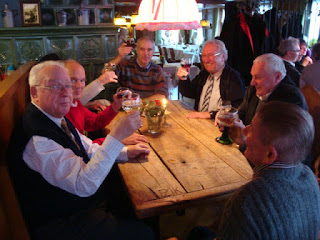 Hans took this picture for me.  The men raised their glasses in a prost to us, which we returned, as we sat just kitty corner from them.  That table is very old and is filled with initials carved into it over the years.

Just below right is our table facing the bar.  We always like to sit where the action is. 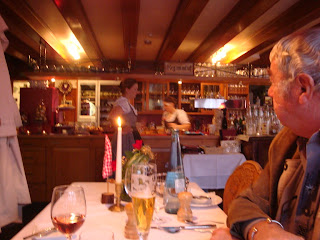 Lina, at age 95, is as young as a person in her 40s when it comes to her mind.  She has trouble walking but goes out on her own with her walker.  She mentioned that many of her friends who are also quite elderly told her that they do not buy any new things for themselves anymore and wondered why she did.  That day she wore a new white and lace blouse with a lace underlay, as well as a very smart black jacket with white trim on it.  She was her usual talkative and interesting self.  She listens well but also has an opinion about everything, from politics, to customs, to men.  Oh, to be like her in our old age!

The three of us having a wonderful afternoon, enjoying the ambiance. 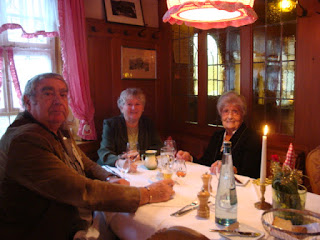 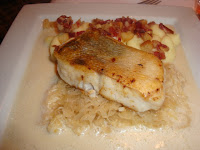 Lina ordered Zander, a delicacy (shown at left).  The perch was served over Sauerkraut and a delicious sauce, along with Schinken pieces.  (You may remember that I wrote about another outing with her, saying how upset she was when those smoked bacon or ham bits were served with the Chanterelle mushrooms.  This time she mentioned it to us but just laughed.  Hans again ate her bacon bits!) 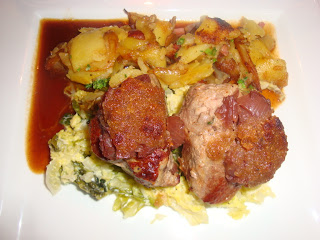 Hans and I both ordered Schweine Medaillons (pork filet).  It was accompanied by creamed Wirsingkohl, which is Savoy cabbage.  Hans cooks that at home from time to time when we have a beef or pork filet.  It is not a vegetable that we see people buying often in Nova Scotia, but it makes for a delicious vegetable dish.  Our meal came with gnocchi, but we both requested Bratkartoffeln instead.  Those fried potatoes sauteed in butter were crisp and delicious.  (As a note of interest, in many Gasthäuser in our part of Germany--as at Zum goldenen Engel--instead of being called Bratkartoffeln, they are known by the Allemannisch name of Brägele.)
Hans' Wirsingkohl:  He just slices the Savoy cabbage (as you would a regular cabbage), adds it to boiling water and some vegetable bouillon (not too much bouillon), then lets it simmer until tender.  He then drains it well, adds cream, salt and pepper and voila!, you have a superb vegetable dish.
I spent some time doing some Christmas baking during the last couple of weeks.  My mother's recipe book came out from the bookcase and once again I made her Scotch cake, better known elsewhere as shortbread. 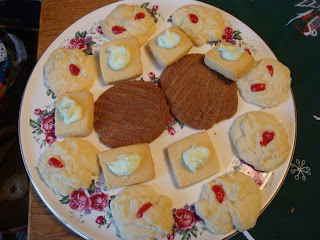 On the outer circle are whipped shortbread.  On the inside, ginger snaps; on the inner circle, my Scotch cake. (I gave the recipe for my Scotch cake in my post of Dec. 14, 2009.)
The ginger snaps I made particularly because an English-Canadian friend of ours loves them and as they are not known here in Germany he is unable to buy them.  So he has a few and so do we.  Many of my cookies I give as gifts.
I had thought I might make my mother's mocha cakes--one of her baked sweets I loved the most--but they will wait until next year as they are a lot of work and time ran out.  First you must bake a cake and then cut it into squares.  Then you frost all sides with chocolate icing and roll the squares in crushed peanuts.  The recipe for Stollen that our friend Ursula gave me this year will also wait until 2012.  It is Ludwig's mother's recipe from Dresden (where it is renowned) and is a very old one, which was passed down to her.  Stollen is somewhat similar to English fruitcake. 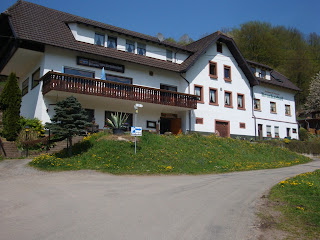 The Bruckerhof Gasthaus at right (taken in spring)
Last Wednesday we women joined the men at the Bruckerhof.  It is now traditional for the men to invite us to join them before Christmas.  Many Canadians knew this Gasthaus well when they were stationed here.  It is not a place one finds easily as it is down a long, narrow country road (wide enough in places for only one car at a time); then you drive up a hill and through a farmer's yard before finally reaching the Gasthaus at the end of the road. 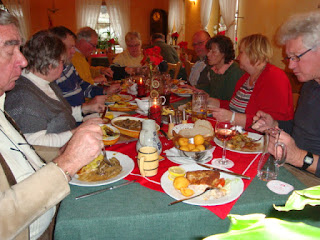 The group of us at the left.  I ordered a Cordon Bleu and Hans, saure Leber.  We both took half home!  The servings are huge.  Sour liver is one of the specialties in Baden-Württemberg.  It has vinegar in the sauce but is not really that sour in taste.  Each Gasthaus will make it somewhat differently, with more or less sourness at each place.
The liver came with a salad and Bratkartoffeln.
Hans' liver below 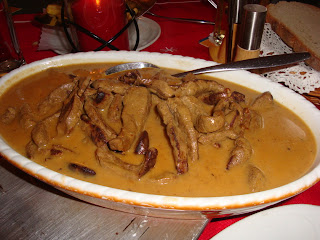 One of our friends ordered a steak with onions.  It is almost as large as the plate! 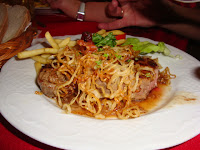 Just down from our table was a large group of elderly men, all there to celebrate the 89th birthday of one of them.  I remarked at the time that he looked to be in his 70s, not in his late 80s.  They were having a great time, singing and prosting with their beer and wine glasses.  After they had eaten, they began singing German folk songs, accompanied by one of the men on an accordion.  What a great pre-Christmas celebration for all of us!
Although the picture on the right is dark, you can see the raised glasses in song. 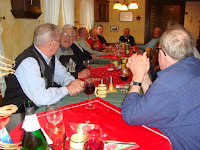 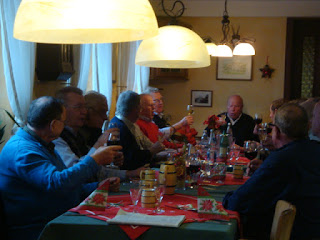 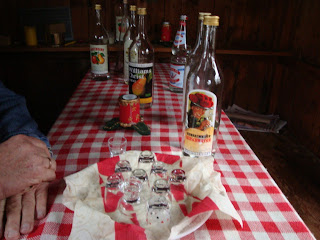 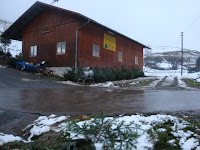 On the Thursday before Christmas, we drove up into the hills to get our tree at a farm we go to each December.  We had put off getting it, as early in the week there had been snow, none of which stayed long, but in the hills it might have been tricky for driving.  All their trees are Nordmann spruce and do not shed their needles easily.  After we made our choice, we sat in the little warm hut, heated by a pot-bellied wood stove.  Everyone who buys their tree there is offered various types of Schnaps (on the house), produced there by the farmer and his family.  Hans also bought a good-sized salami to take home with us. 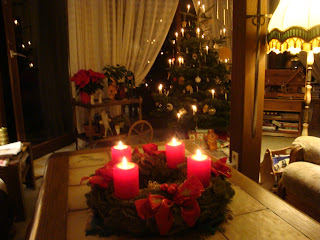 Fourth Advent had arrived and now it was Christmas Eve.  We had our traditional Coquilles St Jacques (the best I have made I think), followed by Hans' potato salad and German wieners, along with an excellent bottle of 1993 Chablis, still perfect after 18 years. 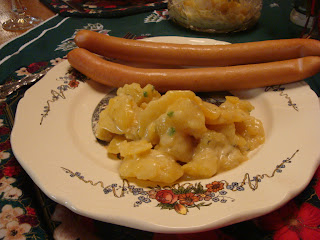 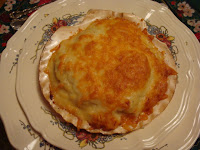 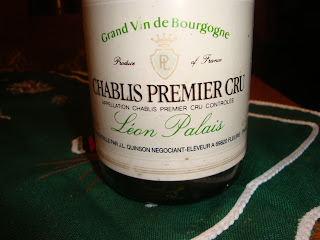 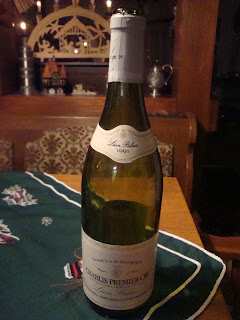 Food and drink and our customs at Christmas, almost more than anything else or any other time, bring back nostalgic days and times spent with family and friends over the years.  Those memories are to be treasured as are all those we continue to make each year.  We hope you all had a very:
Merry Christmas! Frohe Weihnachten!  Joyeux Noel!
and
We wish you all a Happy New Year and all the Best for 2012! 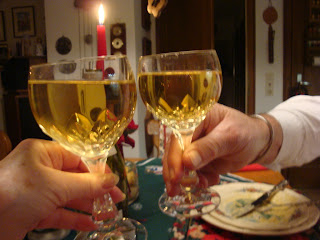