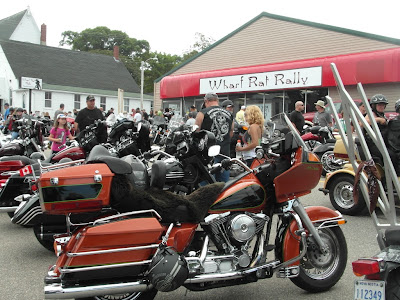 Thousands of motorcycles with their drivers and passengers roared into Digby for five days over the Labour Day weekend for Atlantic Canada's largest motorcycle rally.  It may even be the largest in Canada.

It all began in 2004 when several events were planned over that same weekend, including concerts, vendors, music and tours.  For that first rally, 750 motorcycles came into town along with 4,500 visitors.  Each year the event has grown larger.  Four years later, in 2008, 50,000 bikers and 25,000 bikes arrived. 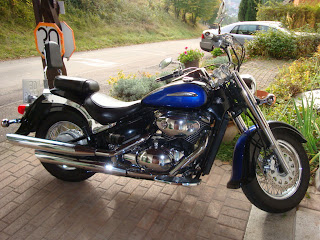 I am not particularly fond of motorcycles even though I did learn to drive one, passing the driving course that was mandatory.  I was too nervous, however, to go out on the road.  For a while after that, I rode with Hans on the back of his motorcycle.  I don't any longer although he still drives one.  I prefer more comfort and no helmet on my head.

As I told him, I am not a motorcycle mama.


﻿
This blog post is not my usual type.  My sister Paula suggested it as she thought it would be interesting for others to see some of the goings-on during that long weekend in Digby.  Hans agreed with her.  So off I went on the Saturday of Labour Day weekend.


Cyclists coming into town and finding their parking spaces 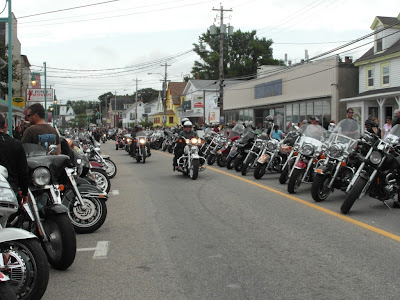 I drove down to Digby, which is about 40 minutes west of Bridgetown, to see for myself just how much it had grown.  It was not my first time but my third, although I hadn't been for three or four years.

I was overwhelmed this year as it was "wall-to-wall" people and bikes.  It was peaceful in the sense that everyone was orderly and enjoying it all, but the noise was deafening as the cycles arrived.

The picture at right, below, I took early when the crowds were not as heavy as later on. 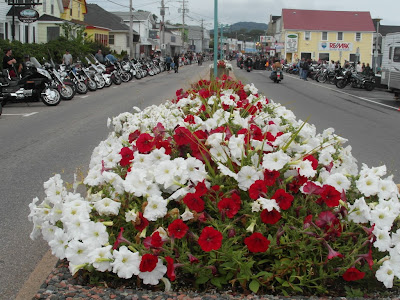 All the bikes were lined up along the main street.  I saw motorcycles from as far away as Alberta, Manitoba, Ontario and Quebec as well as from the States of Missouri, New York and Maine among others.  The majority, of course, were from Nova Scotia and the other Atlantic provinces.


All kinds of bikes and people rolled into town. 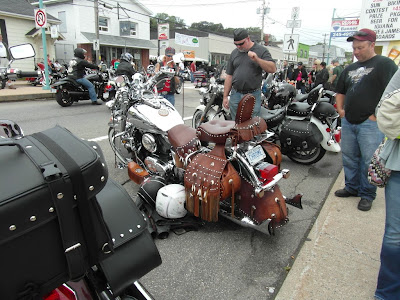 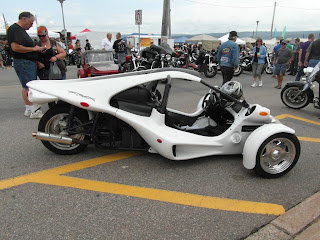 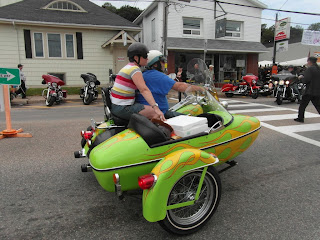 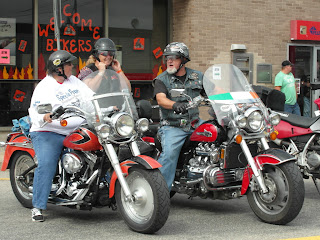 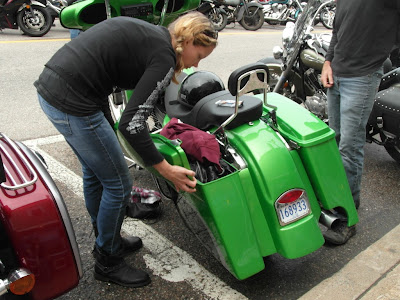 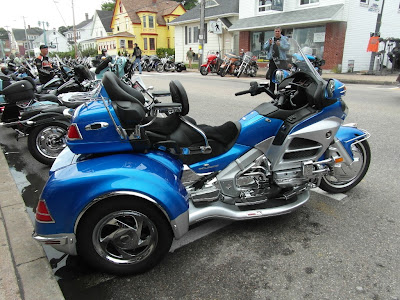 The same chap in both pictures.  He is wearing a kilt.  The name on the backs of many of the riders was interesting. 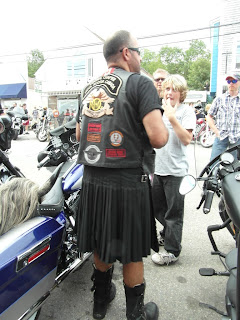 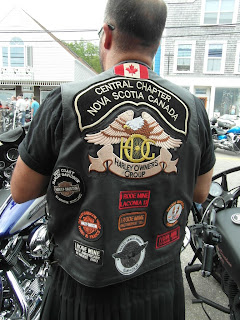 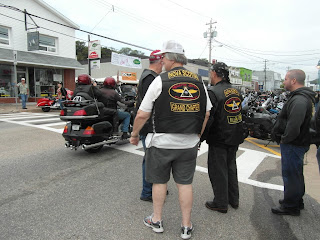 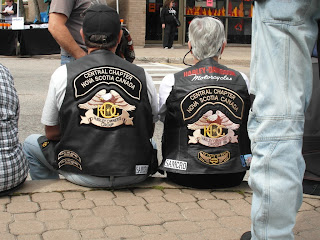 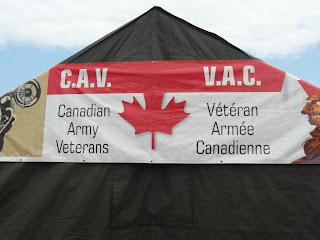 One of the veterans 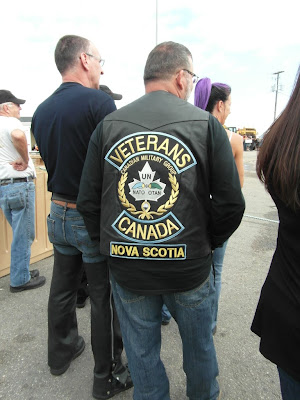 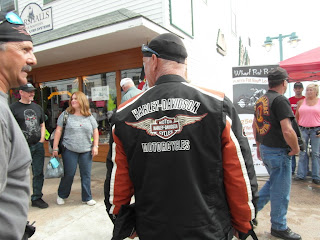 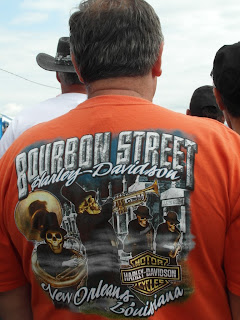 In Digby and likely at other rallies in North America the Harley-Davidson is the most noticeable.  This year, for the first time, the Digby rally played host to the Canadian roll-out of the 2014 model line of the Harley-Davidson.  It coincides with the 110th anniversary celebrations of Harley-Davidson underway in Milwaukee, Wisconsin this summer. 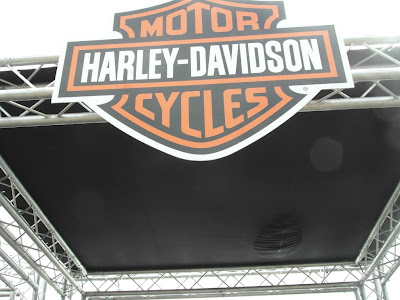 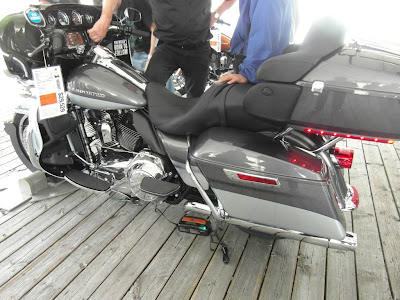 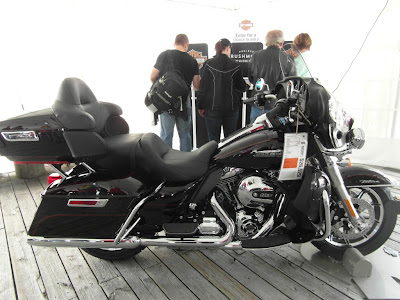 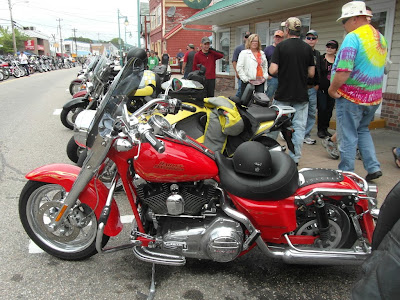 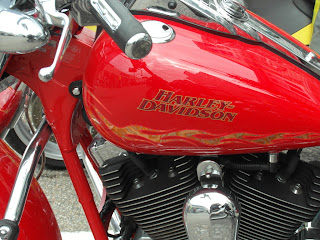 I wandered along the main street, rubbing shoulders with others walking in both directions.  By noon hour, people were lining up at the various food booths.  I stopped at one for a hot dog and talked with a couple of women who shared their table with me.  Both were from Nova Scotia but not from Digby.  They had come down for the rally. 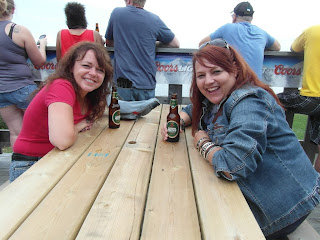 Time was going so I left shortly to browse the booths and to walk along the wharf to have a look at the fishing boats. I will have those pictures up and a few of the town in part 2.
﻿
Posted by Janet MacDonald at 3:59 PM