After several years in the planning, the 2014 Lahr reunion finally took place with many Canadians arriving from Canada and those living here in Germany joining in.  As well, many of the local German population participated, some of them former landlords or former co-workers, those Germans who had worked at Canadian Forces Base Lahr during its 27-year history. 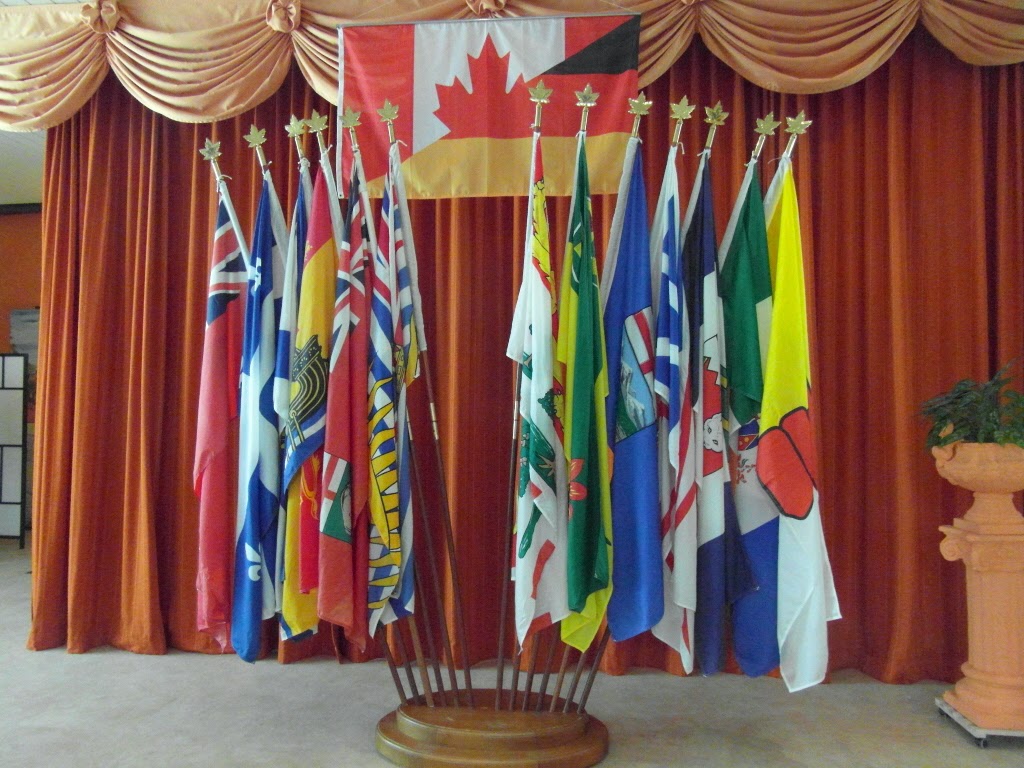 The standing flags above were given to Canada Haus when Canadian Forces Base Lahr closed in 1994.  When Canada Haus closed in December 2010, the flags were given to the City of Lahr.  The City then loaned them to us for the reunion.  Ken Jacobs and Harry Rideout erected them in Eventhaus Vetter at the Flugplatz (former Canadian airfield) where the Buffet and Meet and Greet would take place.  The Canadian/German flag was loaned to us privately. 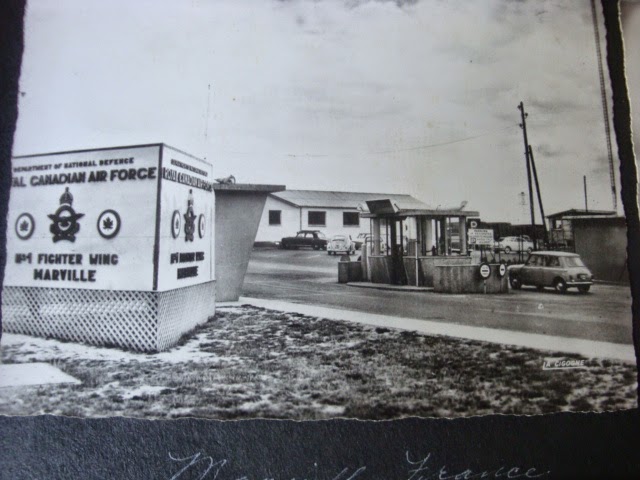 When RCAF Station Marville, France closed in 1967, those Canadian Forces in Marville moved to Lahr, where the Canadians had recently taken over the base from the French Forces.  In 1994, 27 years later, Canadian Forces Base Lahr closed.  Thus this year was the 20th anniversary of the closure and the main reason for the reunion at this time. 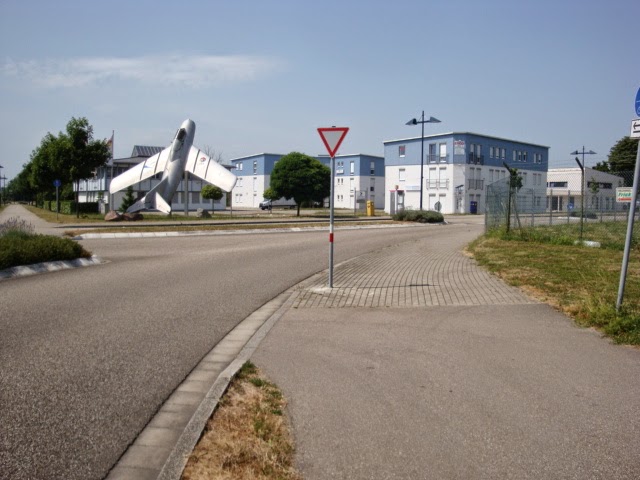 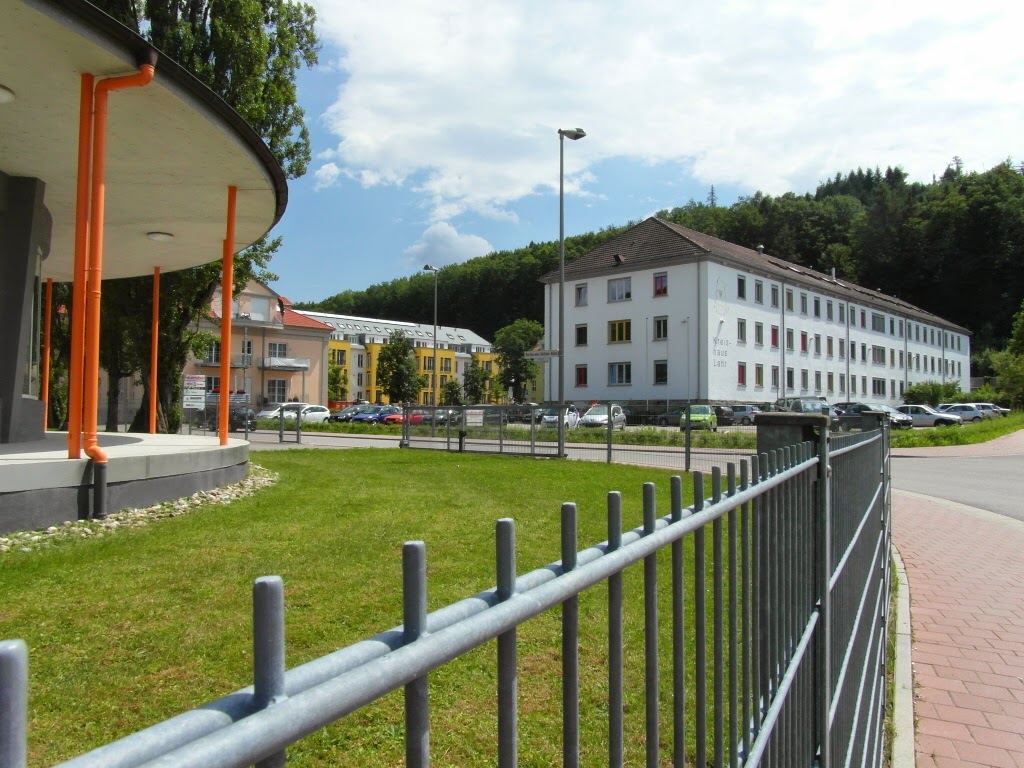 Bill Moore in Edmonton started the planning for a 2014 reunion after a smaller reunion took place in Lahr in 2009.  It began with the decision for a group to book a Rhine cruise from Amsterdam to Basel, Swizerland with the reunion as the end goal.  At that time, we had no idea how many would go on the cruise or how many would come over here separately for the reunion or, in fact, if it would actually happen. 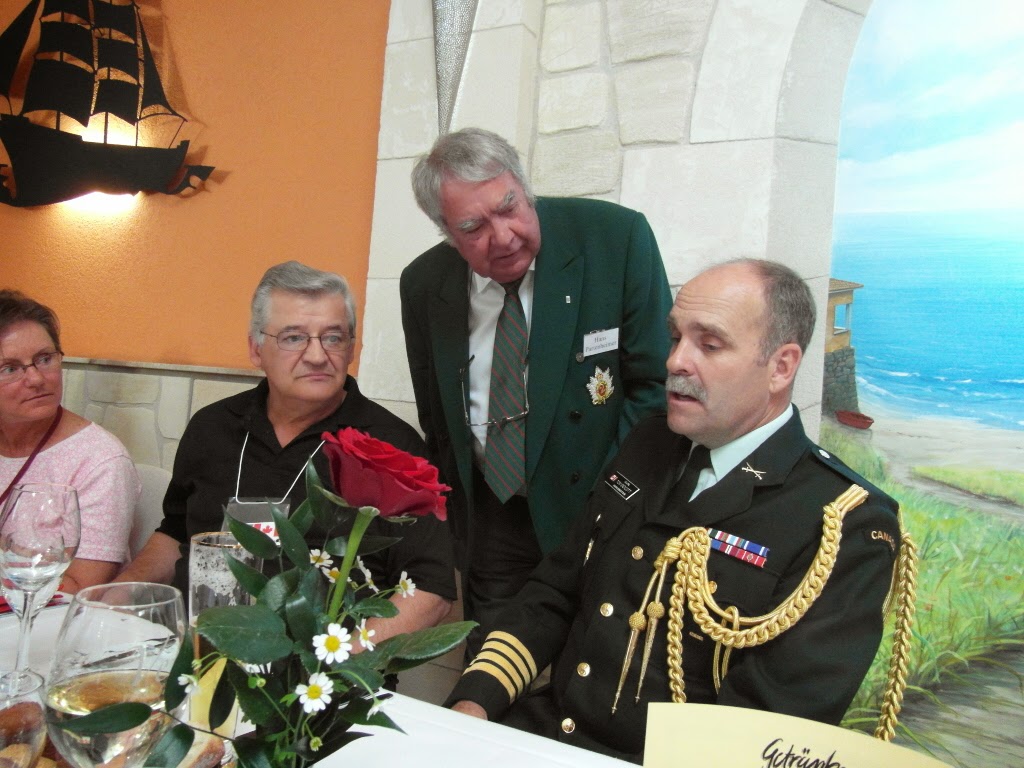 The logistics were not easy as people were scattered across Canada.  Here in Germany we had no easy way to communicate with anyone other than by email or by phone, which was expensive.  We also had no money with which to work.  Germany being a foreign country for those coming from Canada, they had no bank accounts here in which to send registration fees or money for a banquet for example.

Little by little, though, word of mouth travelled.  In the last two months, Facebook was one of the major places to make announcements and for people to find out what was happening.  Until then, the reunion was being planned but none of us here in Germany had much input. All of a sudden, we had a lot to think about.  Where, for example, would we all meet?  And when?  Who would do what?

The following picture was taken by journalist Mark Alexander for the Lahr Zeitung.  It was published on 22 March 2014.

The organizing committee here in Germany 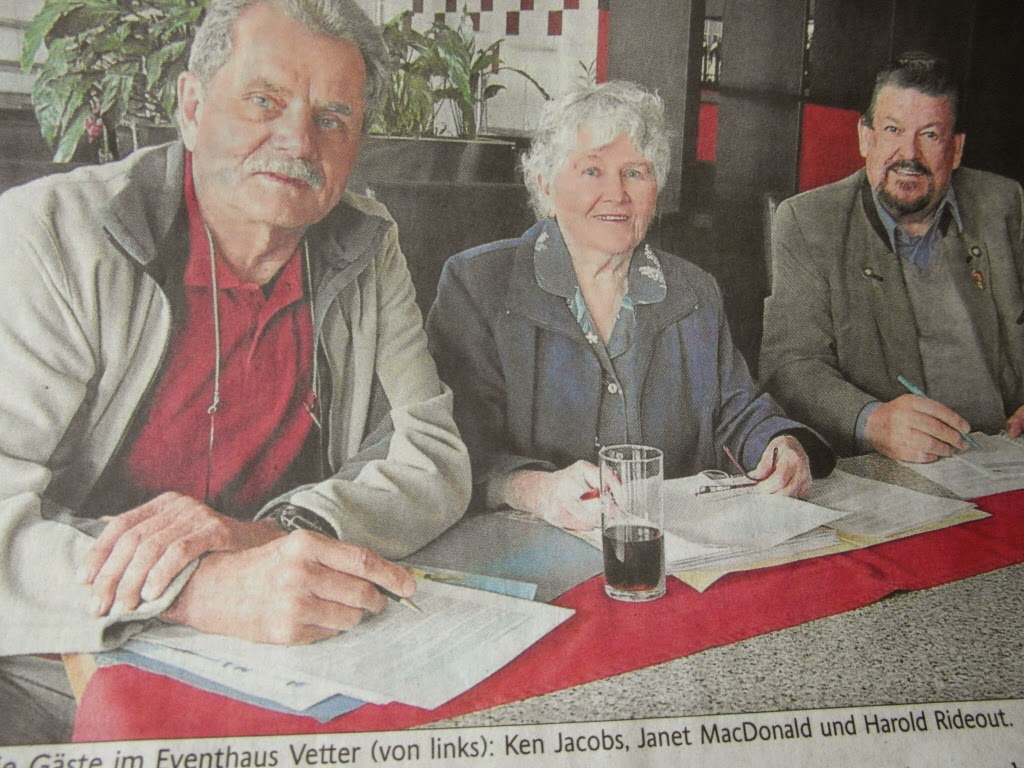 I had been in contact with Bill Moore over the years and as the time drew closer, we now had to decide on where everything would be held and for how long.  Lists started and reservations began coming in.  Ken Jacobs took a leading roll, contacting the various newspapers in the area, making phone calls to the Canadian Embassy in Berlin and to the Mayor's office in Lahr and contacting the Reisebüro for tourist brochures and information.  Harry Rideout came over to Germany from Ottawa area about three months prior and he became actively involved.  We then got the ball rolling.  First and most important, the place for the Meet and Greet was decided upon.  The three of us had meetings with Herr Peter Vetter, of Vetter's Party und Feinkost Service, who would eventually put on a fantastic buffet. 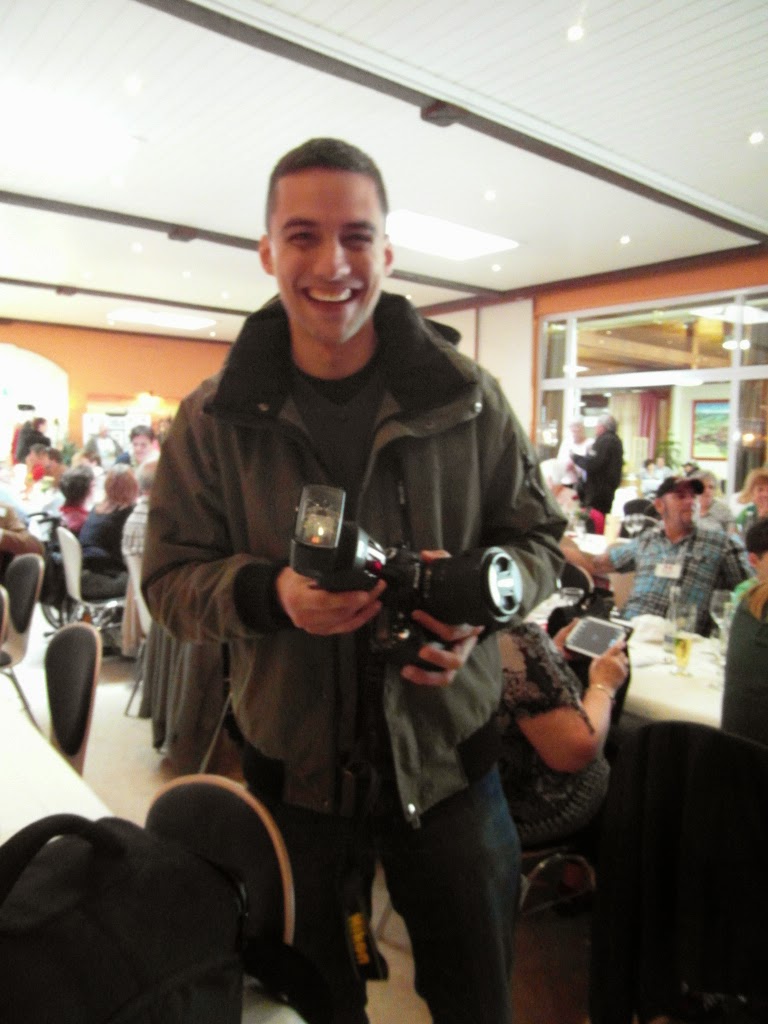 Mark Alexander, a journalist with the Lahr Zeitung, met there with us and his article was in the paper a few days later informing any Germans in the area who might wish to attend the upcoming reunion events.  He wrote a series of articles over the next weeks.  Eventually, all the papers in the Lahr area wrote about the upcoming reunion.

Two other events were also decided upon.  On the 5th, a special evening of music and food, the event in which Harry became involved. On the 6th, a dinner featuring white asparagus was planned by Hans Partenheimer.  (I shall write about those a little later.)

Thus the reunion got underway with the first event, a Buffet and Meet and Greet.  The cruise people (23 of them) arrived in good time on Sunday, 4 May, after Ken Jacobs organized a bus to pick them up earlier than planned and in a different location.  Their initial pick up was scheduled to be in Basel, but due to high water on the Rhine, the ship was docked instead in Breisach, Germany.  A few moments of panic for Bill and for us all at 10:30 p.m. or so the night before, as the reunion was scheduled to begin almost as soon as they were originally going to get to Lahr the following day.  As it happened, they actually arrived earlier, so all worked out fine. 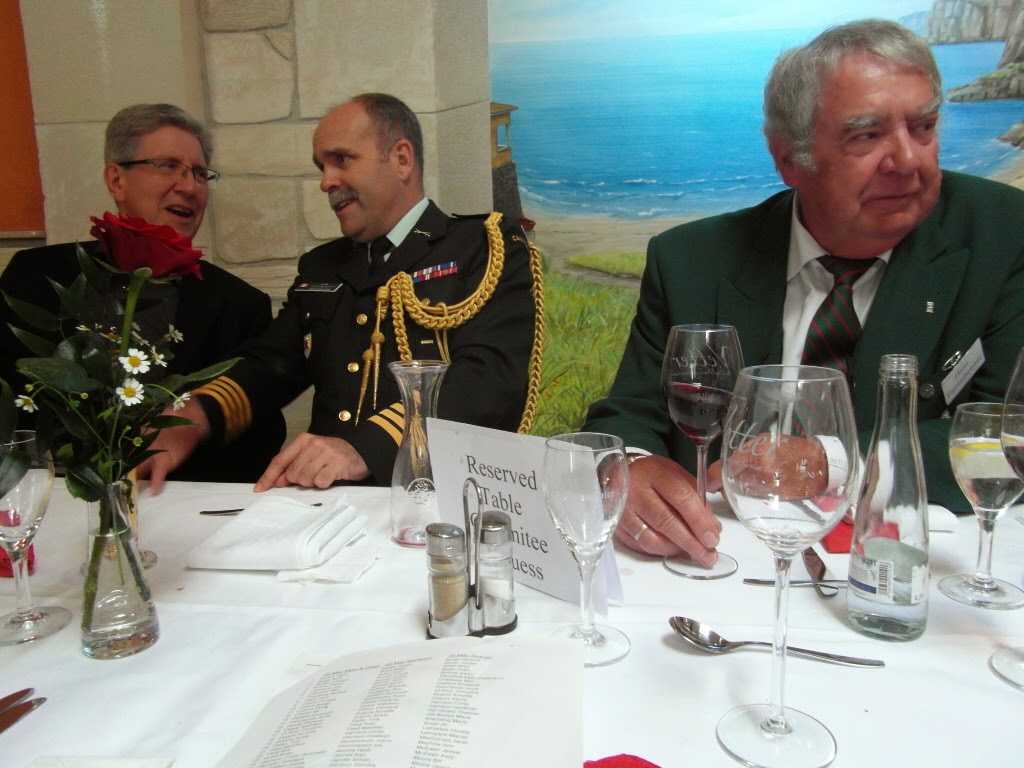 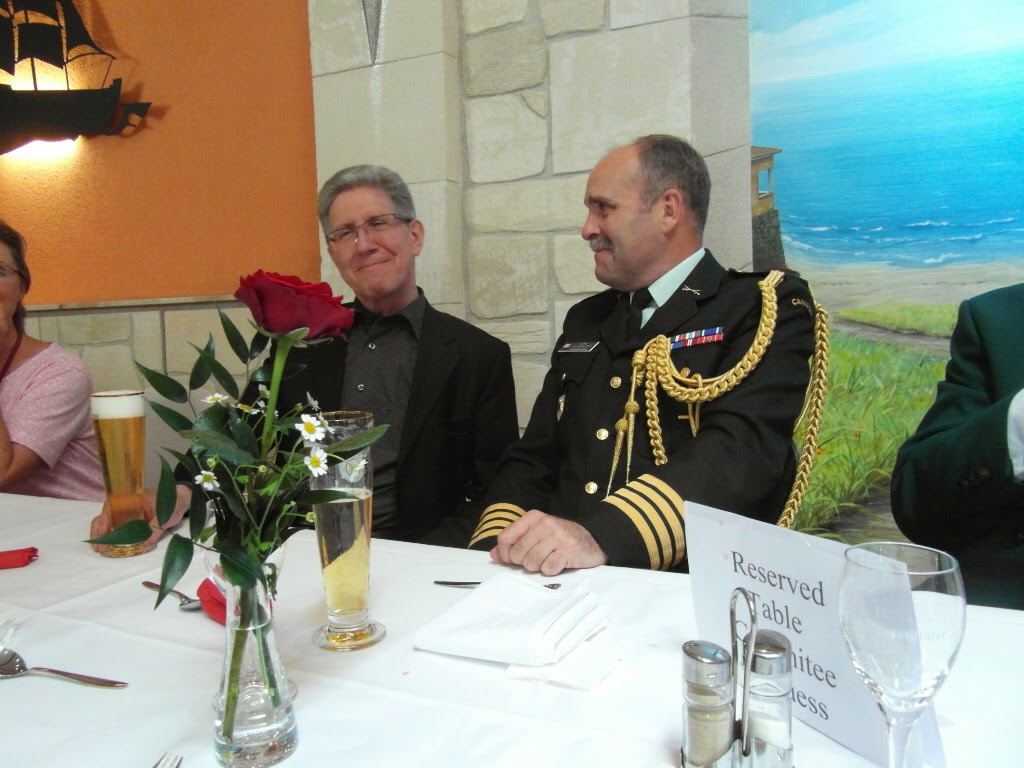 The Canadian Attache at the Embassy in Berlin, Colonel Tom Endicott, attended the Buffet and the Meet and Greet on Sunday, 4 May. The Oberbürgermeister (Mayor) of Lahr, Herr Wolfgang G. Müller, attended the Meet and Greet, giving a short speech, as did Col. Endicott.  He had spent time as a child at CFB Baden-Söllingen, where his father flew fighter jets.  Col Endicott was enrolled into the military at the Black Forest Officer's Mess in Lahr in 1981, thus his special interest in being here.


Below, on the right, Ken Jacobs; on the left, Harry Rideout (The picture shows Ken and Harry greeting guests arriving for the buffet on the 4th.) 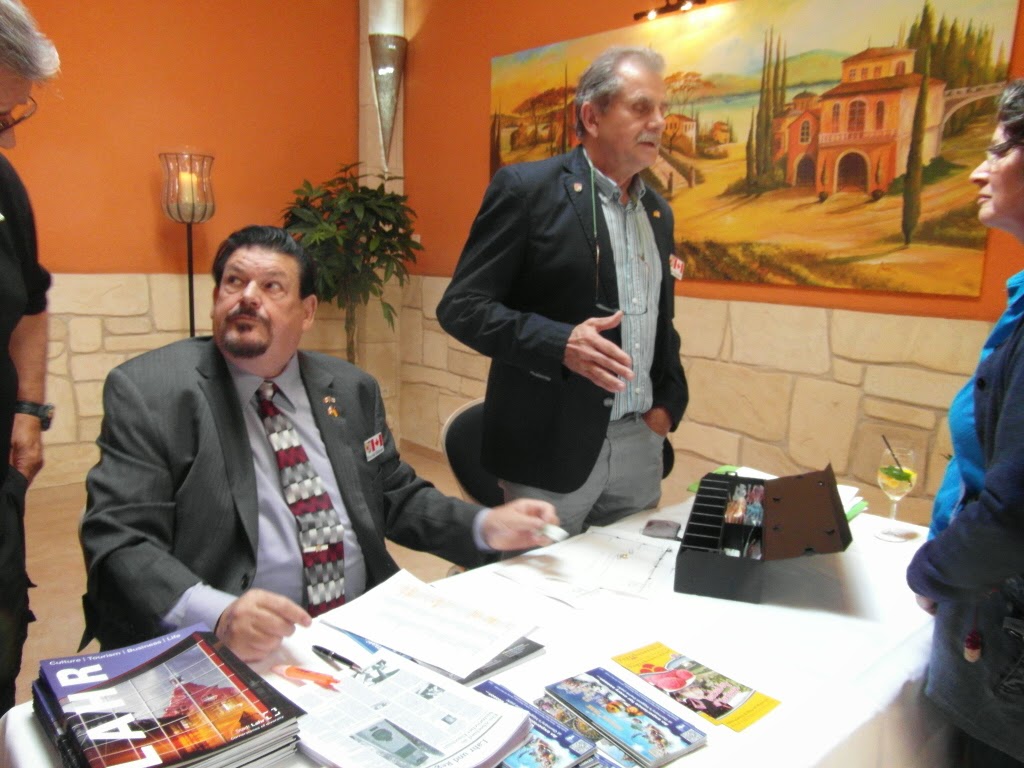 The day prior to the Buffet and Meet and Greet, Ken and Harry put up the standing flags in the dining room and other flags outside.  They set up tables by the entrance with tourist brochures Ken had picked up from the City Tourist Bureau. I was seeing lists in my head as they had been changing daily for a good month for all three events and sending changes and additions on to Bill, Ken and Harry, as they did as well. I also informed Facebook followers about what was being planned. 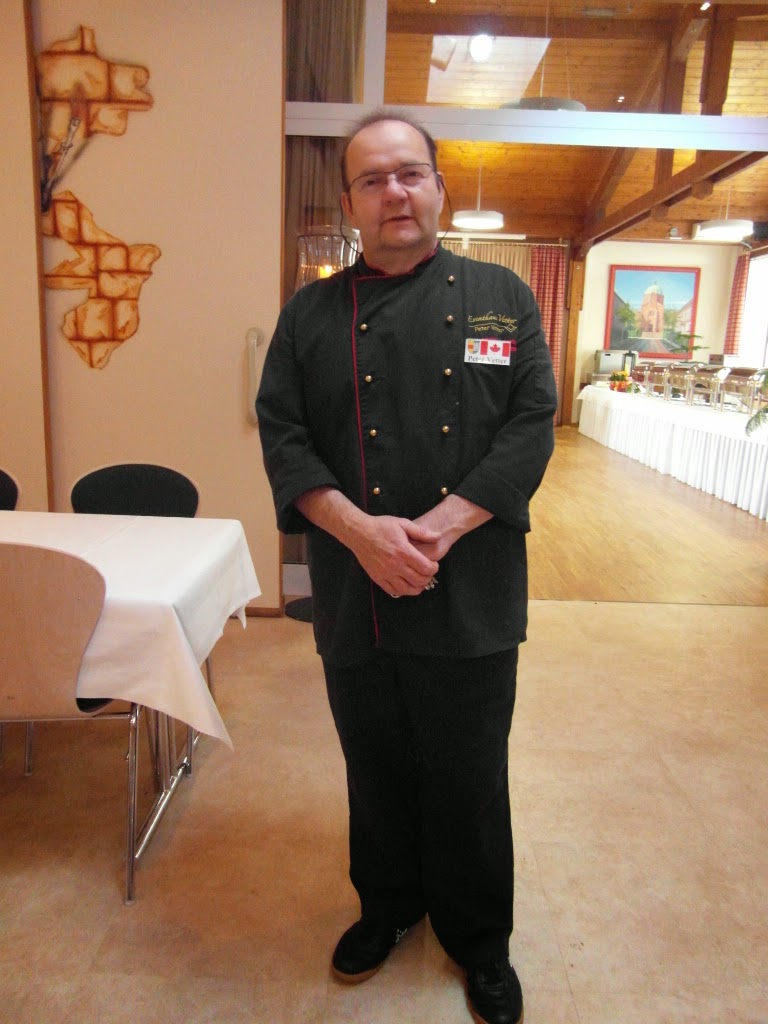 That first big event, the buffet, was to begin at 1 p.m. on Sunday, the 4th.  By the time people found old friends and were already meeting new ones, it was almost 2 p.m.  What a buffet Herr Vetter put on!  And what a great job he did with setting up the tables with red and white napkins in the Canadian flag colours.  It was a huge success.  The food was plentiful and excellent and the service friendly and efficient.  The perfect place for the approximately 100 people for the buffet and many more for the official Meet and Greet which followed.

Herr Peter Vetter, at left, who owns these premises (the former Other Ranks Mess), worked as a cook for the Canadians for several years, both at the Senior NCO's Mess and the Officer's Mess.

So now, on with some pictures of a few of the people who enjoyed the buffet and the meet and greet which followed.  I knew all the names but putting faces to those names is a different matter.  I met many of them that day but just too many to remember individually.


The head table on the left; a view of the setup, with the red and white napkins.
Some of the guests at the tables. 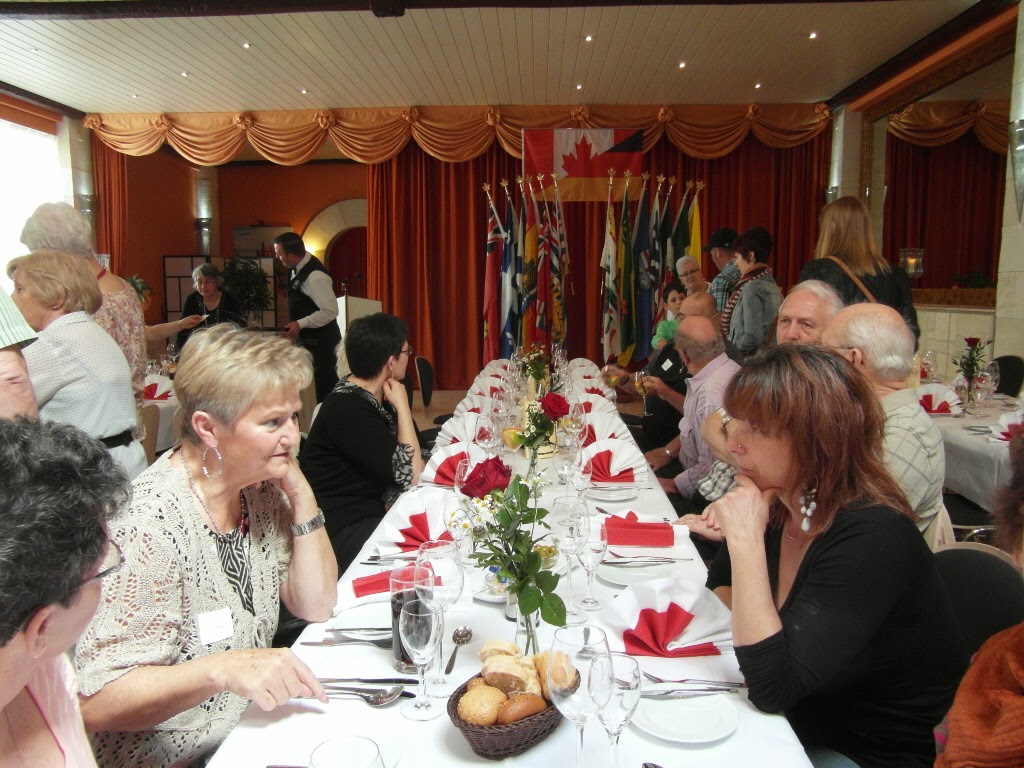 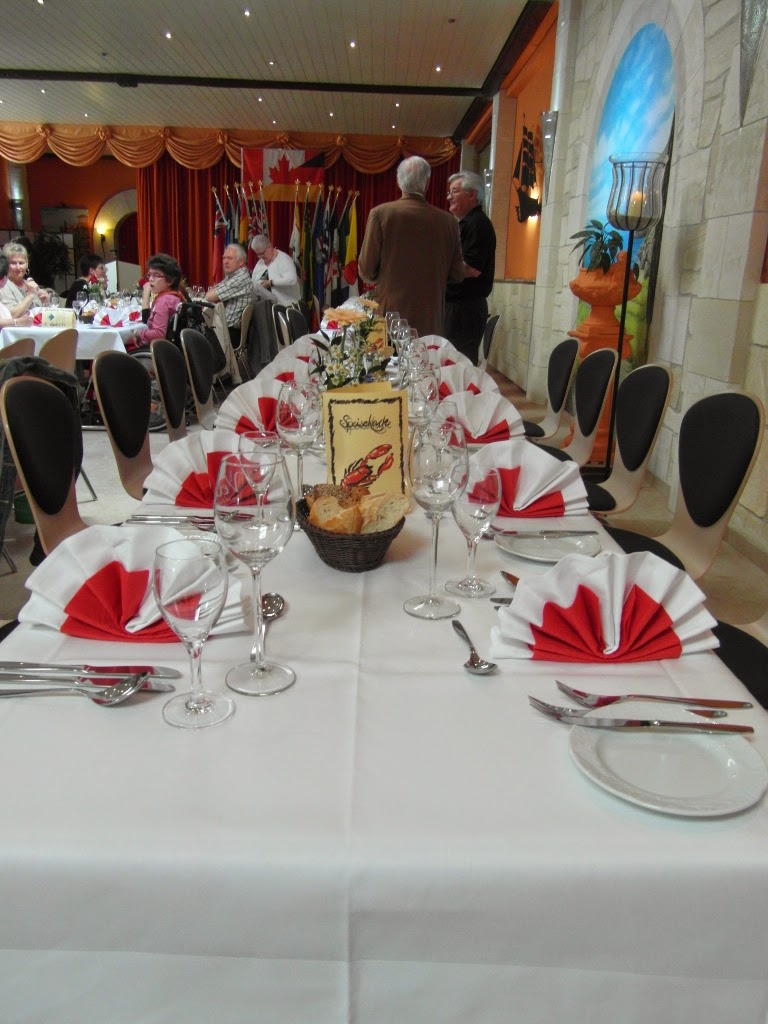 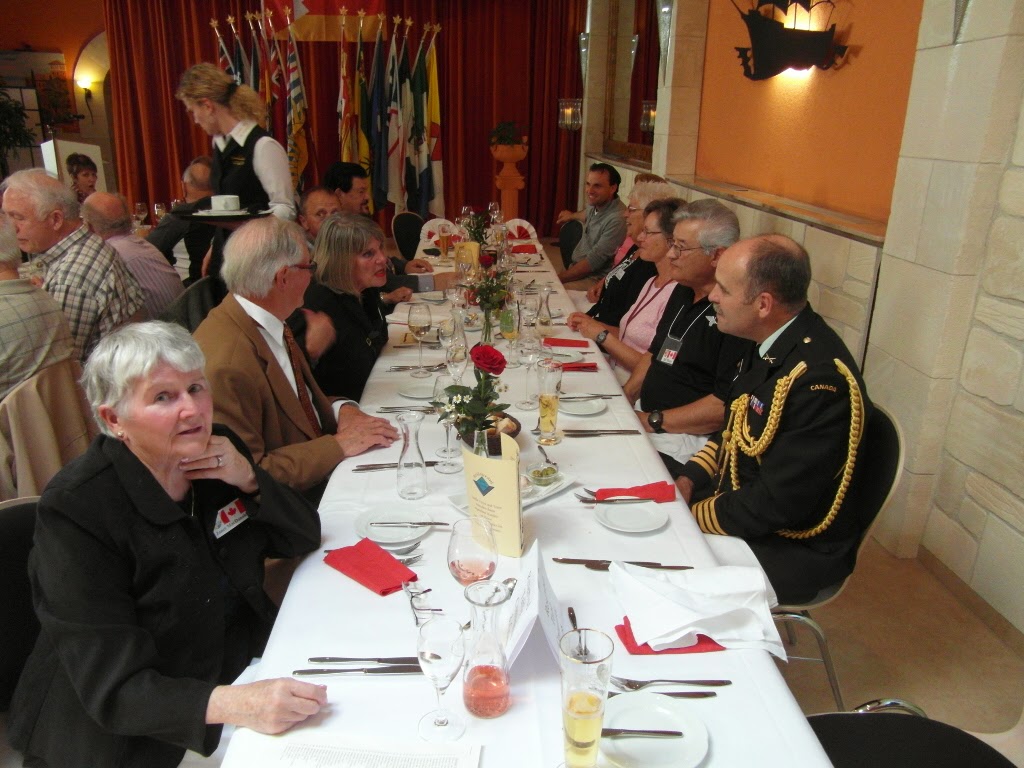 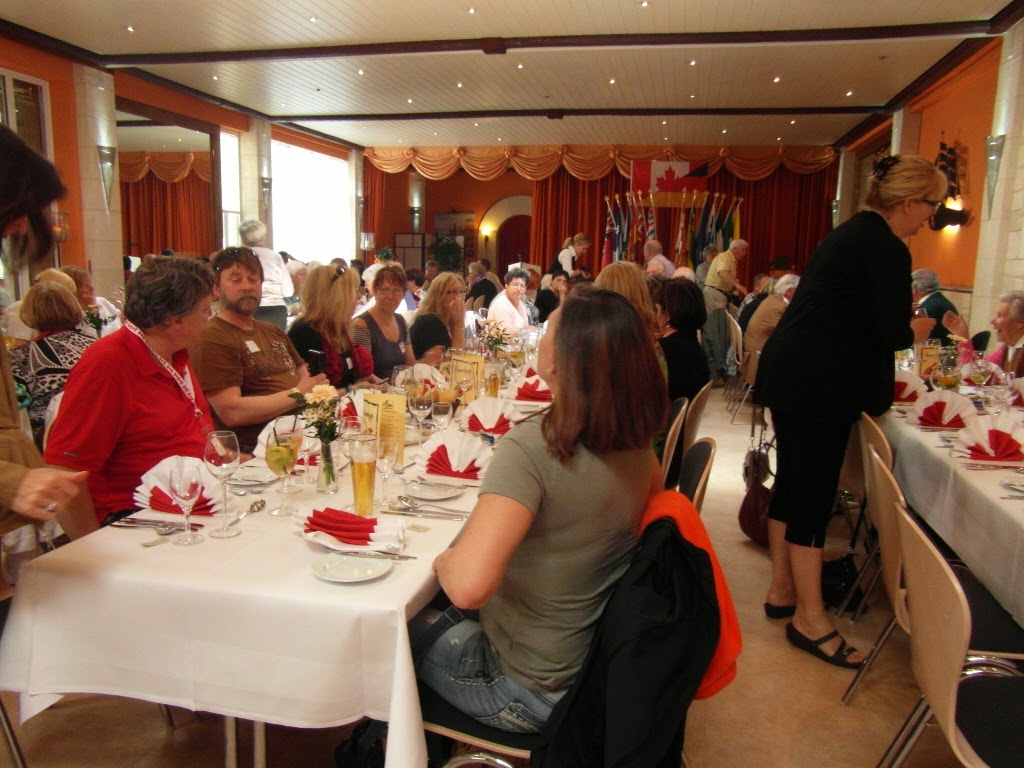 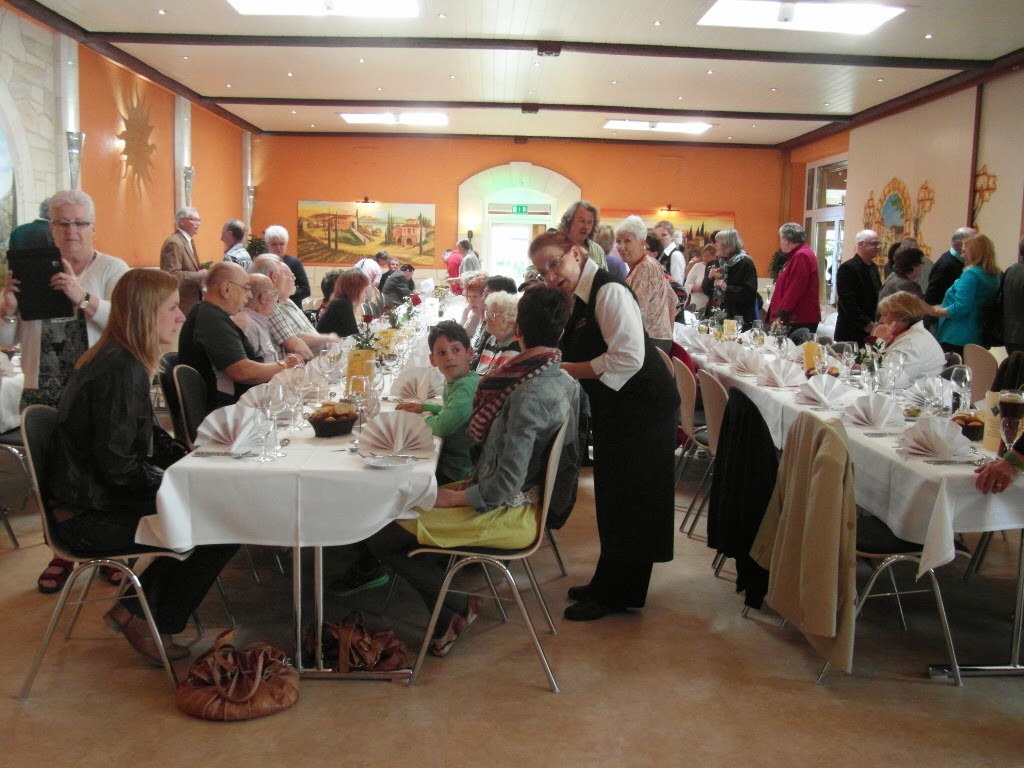 The picture at left was taken from the top of the room thus showing only white napkins.  All ages enjoyed the buffet.

The pictures of the tables shown were taken prior to dinner. 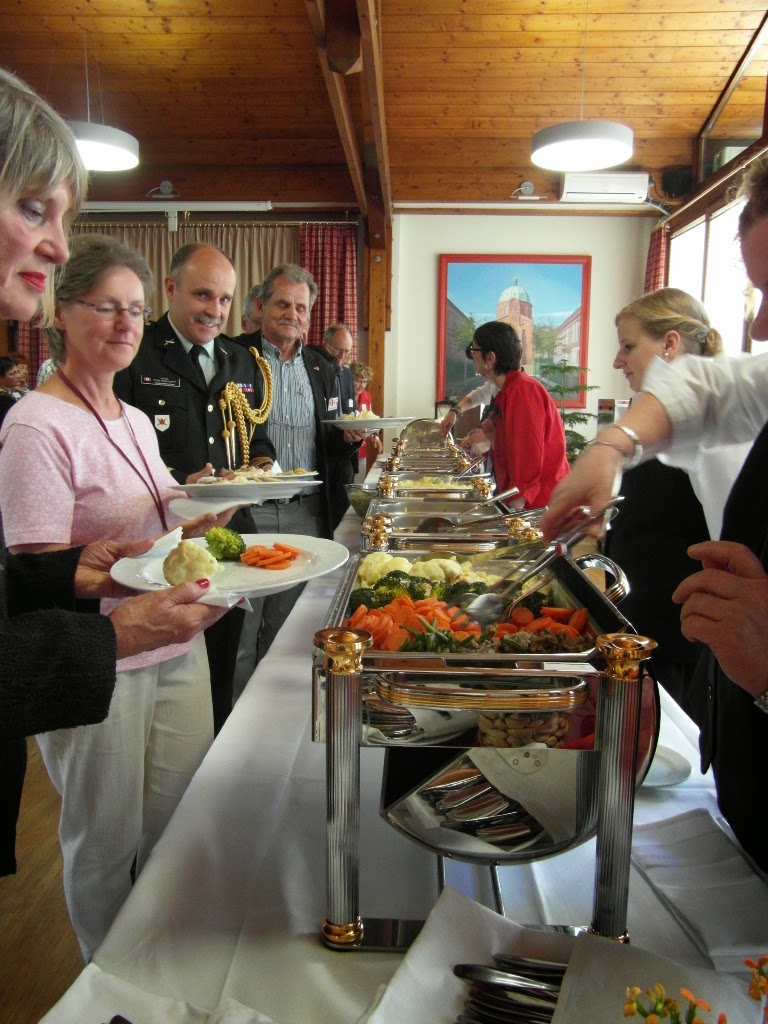 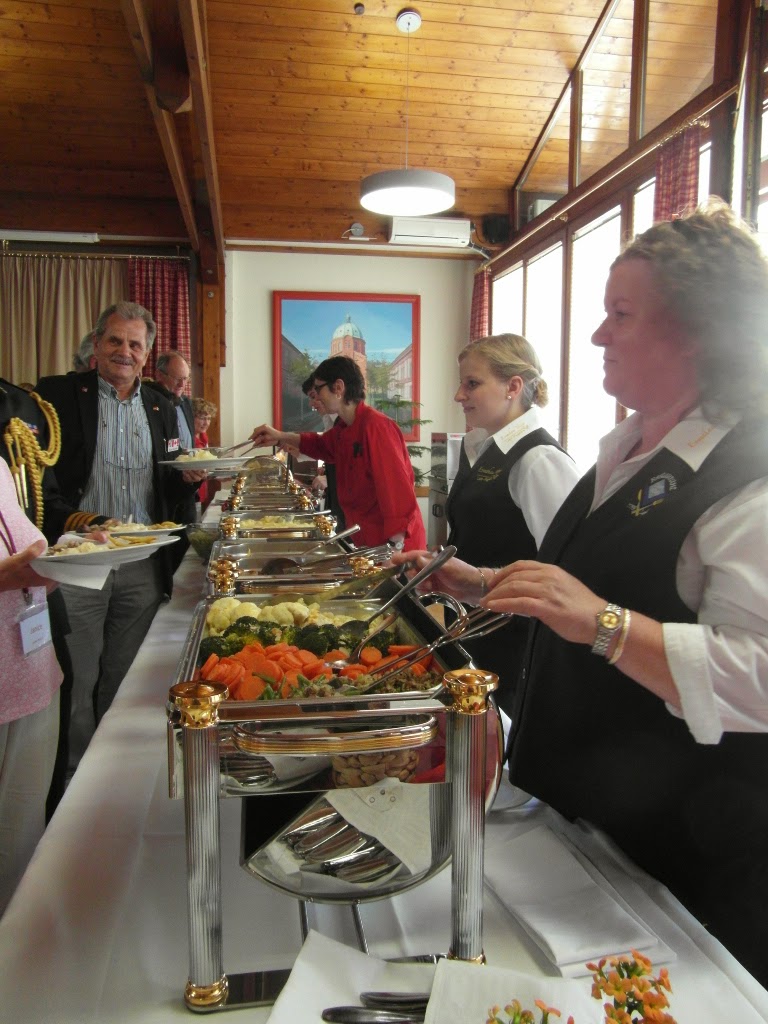 Herr Vetter went to special lengths for the menu card.  We didn't have lobster, but he knows that says "Canada."  On the right, the menu from that afternoon. 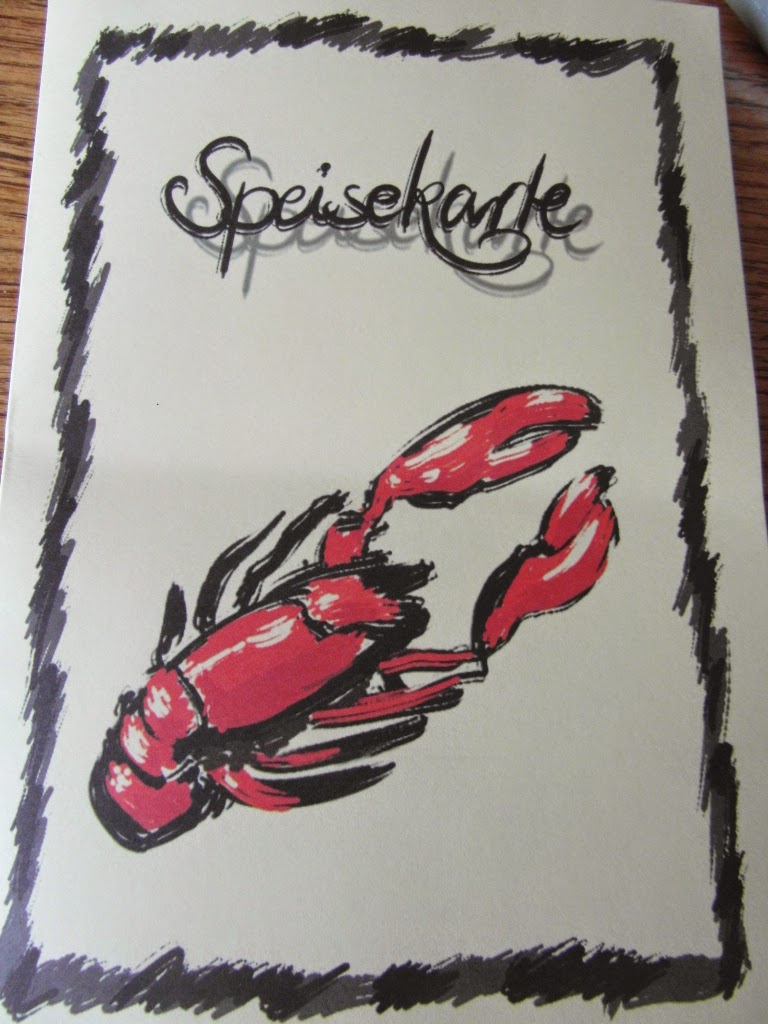 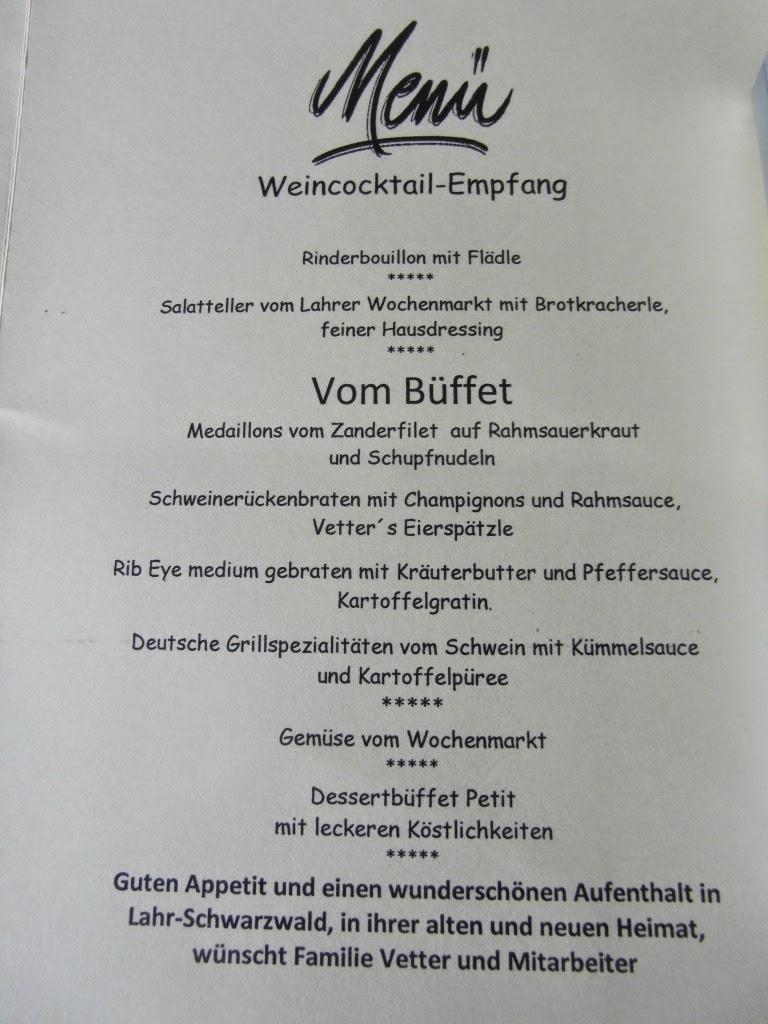 The starting end of the buffet table with Herr Vetter in the foreground helping to serve. 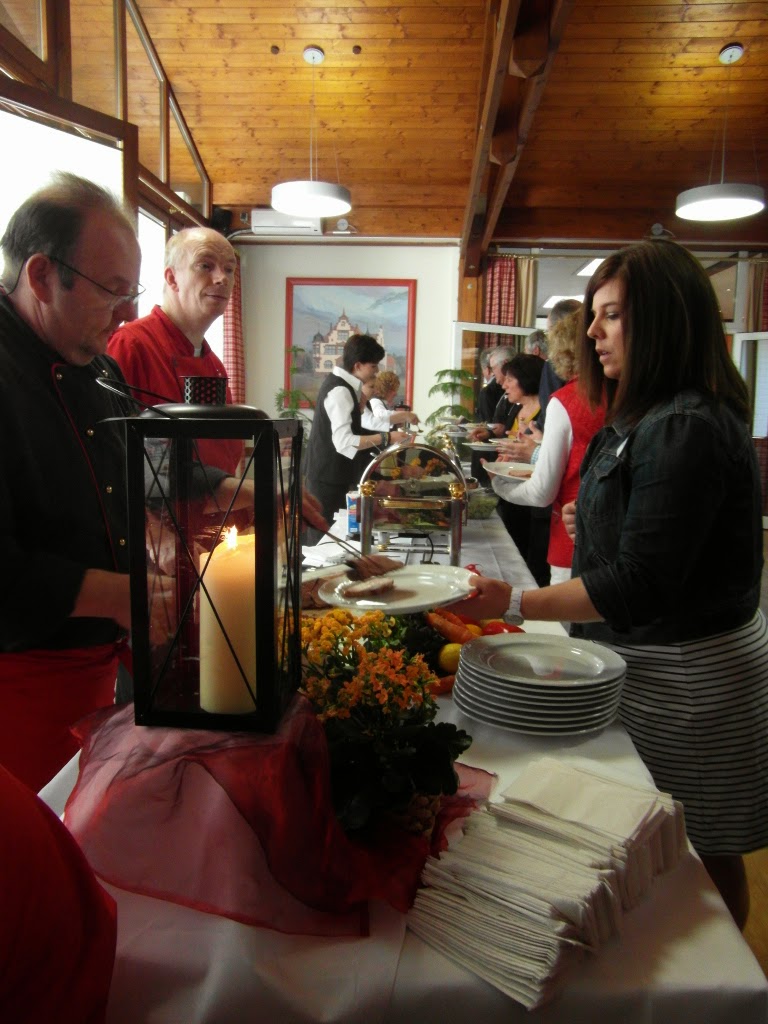 Below, Colonel Tom Endicott giving his speech, with Bill Moore, the organizer behind the reunion, standing to his right.  Bill had earlier made a welcoming speech with a special thank you to those involved.
Jennifer Corrivaux sang the National Anthems of both Canada and Germany. 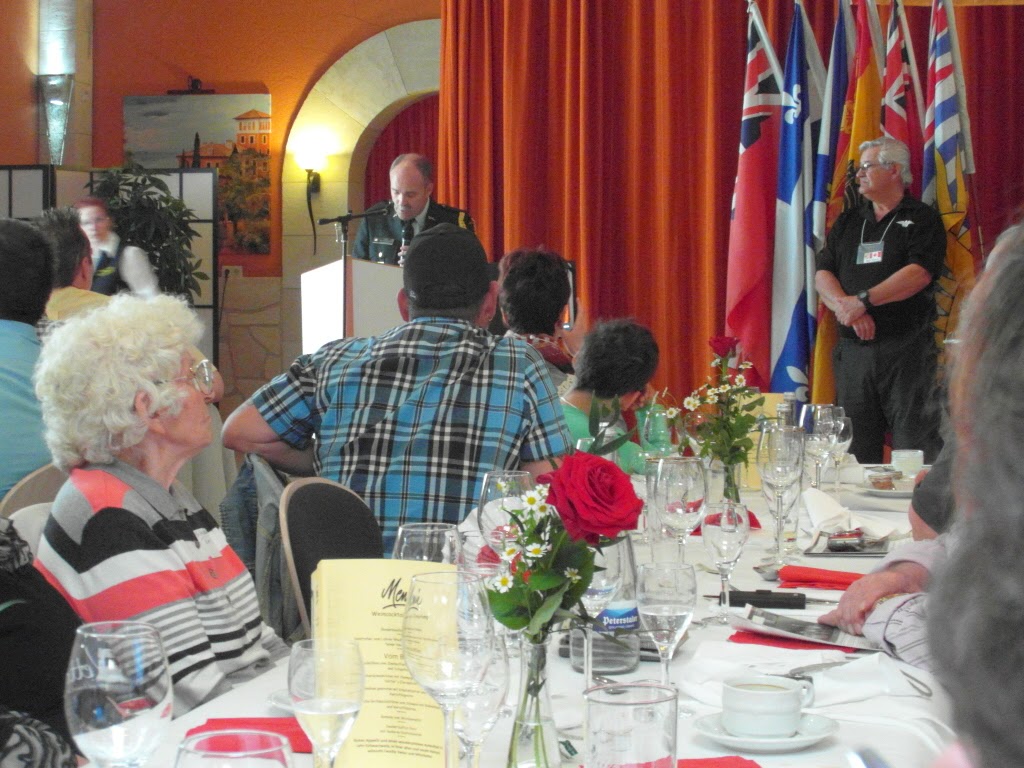 A wonderful afternoon and enjoyed by all those who attended.
Below, from left to right: 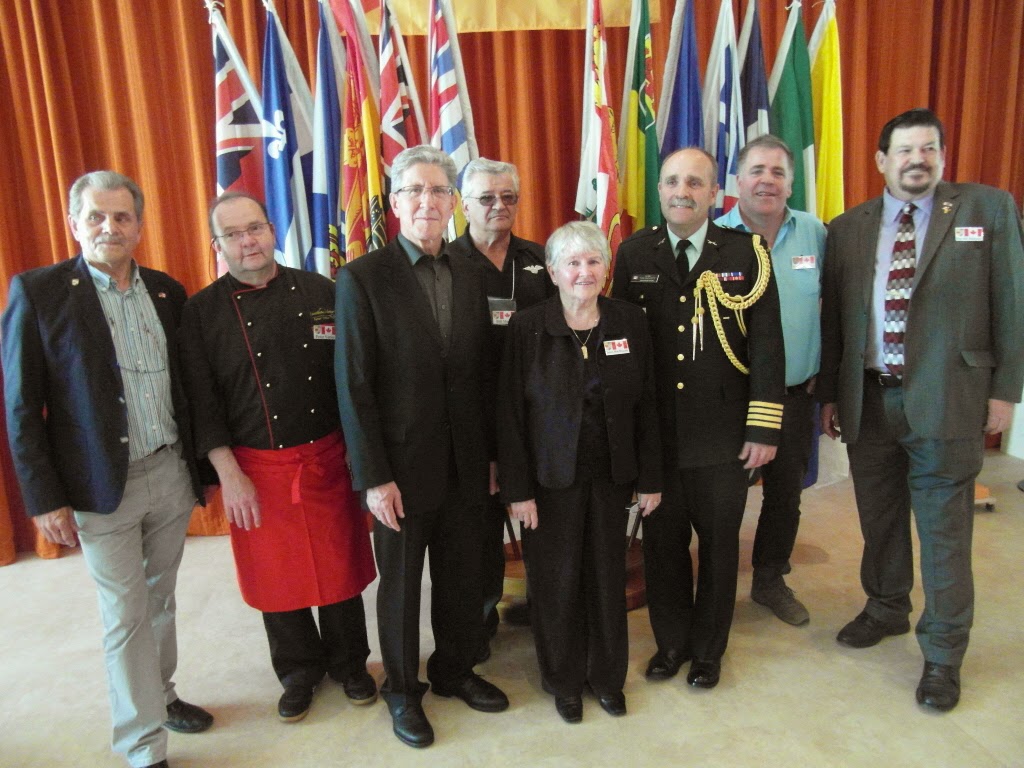 Great memories!
Posted by Janet MacDonald at 7:07 AM