Other Gathering Places: Getting together with Friends 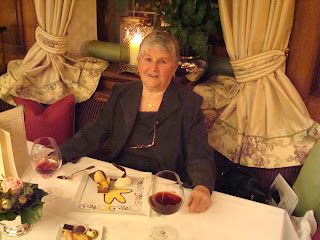 The Gasthaus is the main eating and drinking spot for most Germans. That is partially because nearly every town and village has at least one, and for hundreds of years the Gasthaus has been a focal point of village or town life. But there are other gathering places that draw locals and visitors alike. The following three are common but not quite as many in number.


Restaurants: Many are also called Gasthaus-Restaurant or Hotel-Restaurant, the latter of course will have rooms; the former one, may or may not. Generally the Hotel-Restaurant will be more expensive, but not necessarily, as one of our favourites is a Gasthaus-Restaurant and it is a one star (Michelin) and their menu is fairly expensive. Usually, though, you will find at least one or two dishes on the menu that are not that expensive, but that depends on the place and just how fancy it is. One can usually tell just by looking at the menu posted. All eating places post their prices outside, whether it is a Gasthaus or restaurant.

The picture shown is of me at the Schwarzer-Adler, a one-star restaurant in the Kaiserstuhl, a large wine region built on former volcanic ash. The Romans planted the first grapes on their march north in this area.
Restaurants have much larger menus and will usually have dishes that one wouldn't find at a regular Gasthaus, such as lamb, duck, game or fish. The presentation will also be more elegant generally and perhaps a small first course "on the house" will be served. (Fish is usually only found in more upscale Gasthauses or in those that specialize in it; in the latter case, it might be quite a simple family-run Gasthaus with their own fish ponds out in the country). It is a good idea to reserve if you are anxious to dine in a particular restaurant. Weekends can be very busy, Sunday being the busiest day of all--noon hour and evening. Gasthauses, of course, can also be very busy and it is wise also to reserve for a Sunday or special holiday. With a group of more than four, I would always book ahead, just to ensure having a table available on arrival.

In summer, enjoy dinner on the patio or terrace as many restaurants feature them. Sit outside and enjoy the beautiful weather. During the Christmas season, they will be beautifully decorated inside; outside, most will have a tree glittering in white lights. At this time of year, we look forward to all of that, one of the loveliest times of year in Germany.

Vesper Stube: These are usually cosy places often found "in the middle of nowhere." Go up a mountain road and--if you are lucky--at the top or end of the road, you will find a Vesper Stube. Or driving through the forest on a small road, you come into a clearing with meadows greeting you and perhaps a farm with a Vesper Stube. Occasionally a small village will be the home of one, but mostly they are found in the country.

Generally these are small and simple, with wooden benches and long tables, though some do have smaller tables and chairs. Inside it is usually rustic with wood or even stone walls and a wood burning stove to keep everyone warm on cold days. Meals are simple, mostly cold dishes but with perhaps an egg dish, soup or Bratwurst offered as well. Beer and wine is offered, though the choice will be limited; Schnaps is nearly always available. Some Vesper Stuben have 'Most' on their menu; that is apple cider and it can be pretty potent. It's usually very cheap as it is produced, just like most foods served, by the farmer and his wife themselves. Some of the products that can come right from their farms are eggs, butter, bread, Schinken (ham) and cottage cheese or Quark. The Schnaps will come from the farm as well.

One needs distillery rights for Schnaps-making and the licenses can be handed down from father to son. Only so many licenses are given out, so if you aren't lucky enough to have a father or grandfather with those rights, you will have to wait and hope for the best that one will become available. In the small town next to ours, there are at least two with that license.

We go to a farmer out in the hills and anyone we've taken there with us says it is the best they've ever had. Hans thinks so as well. At that particular farm, the farmer loved his Schnaps (he has now retired and the son has taken it over). It was pretty difficult to get away without sampling a few of them! I rarely drink Schnaps myself, but will on occasion when it would be impolite to refuse. They are very high in alcohol, some 50%, so beware! Most are made from fruit-- cherries, plums and pears in particular. The world-famous Schwarzwaelder Kirchwasser comes right from here.

Isele's, below, is a cosy Weinstuben with stone walls and a simple wood stove to keep it warm. 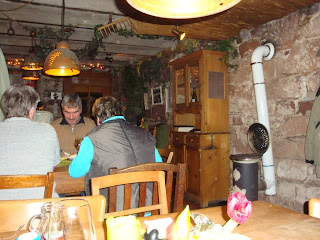 Both Stuben can be similar to a Vesper Stube or to a Gasthaus and can be small or quite large and elegant. They are naturally found most often in the grape-growing areas. Schnaps is usually available but seldom beer. Food is always available and the menu will be according to the size or type of the Stuben (elegant or simple). Most Weinstuben or Winzerstuben are nicely decorated inside, often having wooden floors and wood panelling on the walls and ceiling.

Isele's is in our next village, about one kilometer away.  He is a vintner and serves his own wine and also sells it for those who wish to buy any to take home.  Frau Isele does the cooking, offering a small menu of both cold and warm dishes. 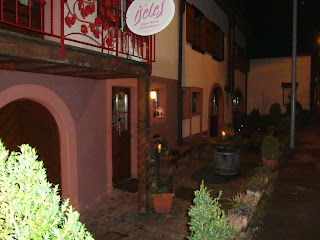 Wine tastings, if at a vintner's stube, are quite often available, though it would normally be given before opening hours. We have gone to many wine tastings but usually right at the vintner's residence, where most have a tasting room in part of the house or next to it. The Winzergenossenschaft (wine co-0p) is open every day and one can just walk in and ask to sample some wines. We make a point, though, if sampling, to buy at least a couple of bottles, as the tasting is usually free.

Germany is one of the few countries whose wines are made from one particular grape. Most wines from our area never get exported anywhere as they sell out right at home or within the province. Some varieties of grapes and their wines include Muller Thurgau, from which the largest amount of white wine is produced (it's the locals' everyday white wine); Weissherbst, which is becoming very popular once again; some interest in it had declined over the past number of years, though not with me! It's my favourite everyday drinking wine; Weissburgunder (pinot blank); Grauburgunder (pinot gris); Spaetburgunder (pinot noir), from which the German red wine is produced. 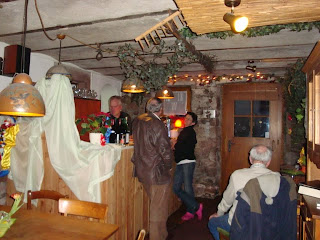 Hans is beside the small bar area talking to Herr and Frau Isele.
In an article later on I will explain some of the ways to determine just what that bottle of German wine you have bought or would like to buy will be like, as German wine bottles tell you quite a lot on their labels. Drinking and eating in Germany is an enjoyable occasion and their eating establishments are varied; they are places to sit, relax and contemplate life's pleasures. So eat, drink and enjoy a bottle of German wine at home or in Germany! Zum wohl!
Posted by Janet MacDonald at 11:52 AM