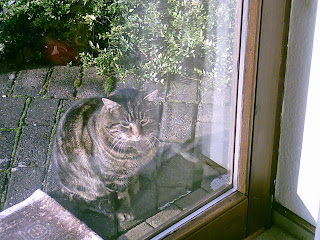 I never wanted a cat! In fact, I was somewhat afraid of them. It's not that I didn't like them, but they made me nervous. Hans, though, loved cats! Every cat he came upon he wanted to take home. He tried some unusual methods, as you will see.

One year in Spain, driving around one of the small Mediterranean towns, we saw cats on every corner. Most were strays. Hans spied a kitten and insisted on bringing it into the car. His excuse was that he was doing it a good turn! I, of course, argued that this wasn't the time: perhaps it belonged to someone already or it would mean we wouldn't be able to travel. He didn't listen. The kitten went back to our trailer at the campsite. I refused to let it near me, so I closed the door at one end and slept behind it. The next morning, Hans decided that, "Yes, it might belong to someone!" So off we went to town and put the young cat back where he had found it. That ended cat talk for a time.

A few weeks later, we were driving in the hills about an hour from home and stopped at a Gasthaus for a bite to eat. Inside, a young cat was wandering around looking for attention. Hans was again smitten! This time, he asked the owner if he could have the cat. The owner agreed: "Yes, that cat bothers some of our guests, so that's fine with us!" So again, back one came in the car with us. The following morning I reiterated that we still wanted to travel and besides, company was coming so it wasn't the right time. Amazingly, he agreed and back that young cat went as well.

The next day, our friend, who had just arrived, and I went for a drive. I began developing guilt feelings, so when we returned I told Hans that maybe we should have kept the cat. That same night, he drove all the way back to retrieve it. In the darkness he couldn't find it and was too embarrassed to ask the owner about it. That ended that episode, too, but it showed his dedication to becoming a cat owner! And with me, capitulation was in the offing.

The following summer I was in Nova Scotia on a holiday. The day I returned to Germany I noticed a scratching pole in the TV room. Hans had forgotten to hide it. So my first question was: "Okay, so where's the cat?" Out from under the sofa slid a small greyish brown little tiger cat. She was timid and nervous and wouldn't come near me. Initially I wasn't too pleased, but little by little she looked me over and I looked right back. She was cute! She was a stray and about four months old. Hans had found her sleeping in the outside window well; it had taken him three days to entice her into the house. He named her Tammy--after the song sung by Debbie Reynolds, who played Tammy in the first "Tammy" movie. There was no way I could send her back outside; she now liked her new warm home with all the food with which Hans was spoiling her. He had also made sure she received all her shots and many toys. So she was here to stay.

Well, little by little she and I became friends and eventually she became my little cat. She still loved Hans, but it was to me that she always came to first. We--I should say, Hans!--bought every book he could find on the subject of cats. It was like following Dr. Spock's advice for a new baby in the house.

Tammy did halt a lot of our travelling. Hans had been sure we could take her to Spain or elsewhere, but not I. However, the following summer off she went to Nova Scotia with us, accompanying us back and forth for several years.

That very first summer in N.S. she received a gift: yes, another cat! Hans, up to his old tricks, fell in love with a kitten in a pet shop and he felt it would be company for Tammy. Tammy felt otherwise. No way, she said in many ways, some not so wonderful--like using the couch for her bathroom for a week or two. With this development, Hans phoned my sister Carol in the States to get her advice as she and Derek had had cats for years. She told him that Tammy would eventually accept Fritzie and not to worry! She was right.

Fritzie was enamoured with Tammy as he saw her as a cat to chase and taunt and he did that from the very first day, as small as he was. Tammy learned to tolerate him over time and eventually came to like him, always, though, on the watch for him. He did recognize--as did the cats that joined them--that she was the queen. And all of them certainly recognized him as the king, including Tammy! I'll write about Fritzie and the others at a later time. We lost him just last spring and Tammy, two years ago.

We loved those two cats dearly. They were our first. We now have four and we love them all. For some of them, I was the instigator--not Hans! I just don't go out looking for any to take home as most of them have found their way to our door without any help. One of them, Daisy, is in the above picture. She was the oldest but not the first. We still have her, a sweet and gentle cat.


Posted by Janet MacDonald at 2:17 AM