Christmas Trees and a Schnaps Hut

Germany started the tradition of Christmas trees in the middle ages.  Christians around the world took up the custom little by little until today it is one of the most enjoyed and loved of all Christmas traditions. 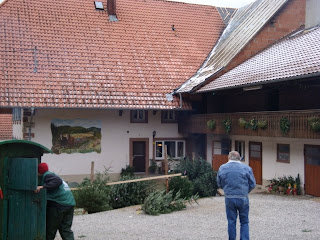 Unlike most North Americans, Germans don't put up their trees until almost the big day itself.  That was the same when I was a child in Charlottetown.  The tree went up about a week before Christmas. Dad put the lights on it--but never lighted them, at least not when we were there--and Santa decorated it overnight on Christmas Eve.  It was such excitement on Christmas morning when first seeing our tree magically transformed from the night before, seeing the toys and parcels beneath it and all the dishes that held special Christmas candy.  We did the same for our children in their early years, but we then decided that it was a little too stressful and rushed.  So after that, Terry and Susan helped us and that was special, too.

The picture at top right shows Hans, checking out a few trees in front of  the farmhouse where we buy our tree and the son of the owners looking inside a small hut.

Here in Germany, we now put our tree up about the 22nd of December and decorate it the next day.  Many Germans still do that on the afternoon of the 24th, behind closed doors so the children cannot see it until time for the family to gather.  That is when they see their decorated tree for the first time and all the presents beneath it, left by the Weihnachtsmann, the German Santa.  Trees here are not taken down right after New Year's as we always did in Canada; they remain up until the middle of January, after Epiphany, and some later due to a special religious day towards the end of the month.  The latter is only in certain areas and most often in the country.

The picture below shows more trees and a tree going through a wrapping machine. 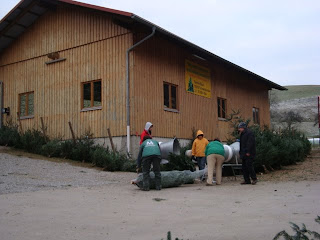 First, though, one must get a tree.  And that is what we did late yesterday afternoon.  Each year we drive into the country, up into the hills, to a farmer we've gone to for several years.  It isn't far, only about a 20-minute drive.  We now know them and they know us, so it's handshakes all around.  The farmer and his wife have several children (grown now) and some of them are working there as well.

They have many trees from which to choose and all are grown to be as perfect a tree as they can manage.  Because many people, including us, use live candles on the tree, they are also grown to accommodate that custom.  The branches stretch out but there will also be enough space between the rows of branches to ensure the candles can burn safely.  The candles are also the reason most people want their tree to be freshly cut; at the farm that is the norm.  Their trees also don't shed needles quickly as they are a special variety of spruce.

Yesterday, we wandered around looking at many trees, some too tall, others not tall enough; then we found the tree we wanted, not as high as other years, but high enough, at around 6 feet or so.  Our ceiling is about 8 feet high so it will be easily accommodated.

It was a fairly quiet day at the farm, but others were there and some arrived later.  In this last week before Christmas, it will get busy.  We went yesterday to make sure we had a tree before any snow might arrive, as snow would make it more difficult to drive there due to the steep climb.  However, the weather is said to be getting warmer in the next week, so we don't expect a white Christmas.  At the moment, it is cold; this morning, -3C., but the sun is shining. 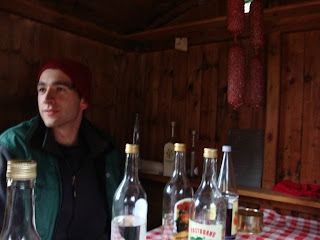 One of the main reasons we go to this farm, aside from always finding a nice tree, is the small, warm hut that they invite us into to warm up and to have a glass--or two--of Schnaps, made by them at their farm.  That has become a traditional custom there.This year, one of the sons, age 23, sat inside with us and poured us a glass of Williams-Christ (pear Schnaps) which was our choice.  Three others who were looking for trees joined us.  Also offered was Kirchwasser (cherry Schnaps) and two other types of distilled liquor, all "on the house" so no cost involved.

The picture at right shows the young man, the Schnaps and hanging salami.

The young man's mother was busy dealing with people outside, but she came in now and again to talk a little.  That son told us that he had been involved with the trees as long as he could remember.  The gentleman inside with us said that when they first started going there 20 years ago, the children would be asking them if they would like some Schnaps!  The young man laughingly remembered doing that--at age three! 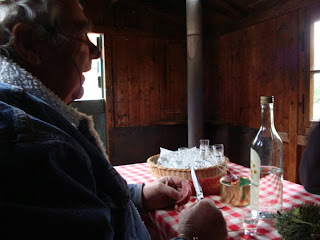 The farm also sells their own Schinken (ham) and salami and Hans bought the latter.  He cut a piece off while we were sitting inside and it was excellent (the rest went home with us!).  See the picture at left.  The salami that was hanging from the ceiling inside the hut soon disappeared as the others also bought some.

This small hut is only large enough for a table (sturdy picnic-table style) and a bench on each side, plus a small wood-burning stove.  It can hold at one time only about eight people, though we have seen ten squeezed in!  Before we went inside, seven came out.

The picture below, right, shows me inside the hut surrounded by Schnaps bottles and glasses in the tray. 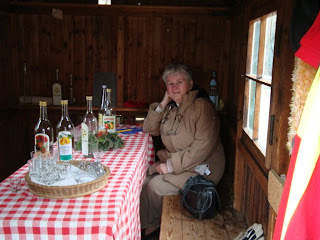 On the drive home, we followed a car--with a small trailer attached--loaded with trees.  That will be common during this next week.  In mid November the same can be seen, but with larger trucks loaded with trees for the various markets, towns, outdoor squares and tree sellers.  But none are lighted until First Advent or perhaps a few days ahead of time, except inside the stores, which do light them up around mid November.

The picture at left below shows the car and trailer loaded with trees driving through the town of Schweighausen; we are following behind. 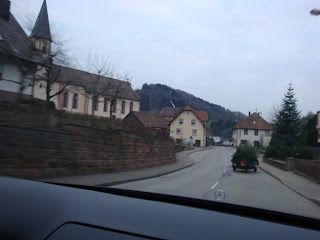 As for our tree, we not only put real candles on it, but we also use electric lights that look like candles.  When we light the real ones, we sit and watch them glow in a darkened living room on Christmas Eve for 15 to 20 minutes before tamping the flames out.  Then we turn on the electric candles and the rest of the evening's traditional Christmas celebration continues.

Posted by Janet MacDonald at 7:59 AM