Third Advent and Sunday Dinner at a Gasthaus 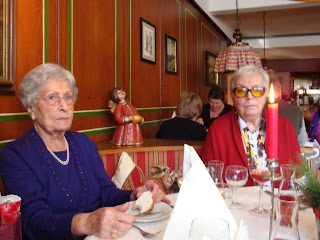 This was Third Advent and the day we met with two lady friends for dinner.  Every few weeks Hans and I drive down to Freiburg on a Sunday to pick up Anita, who is 83, and Lina, who is 94.  Anita has poor eyesight and a new hip, but is otherwise quite well.  Lina has few problems; her hearing is as good as a younger person's and so are her eyes.  She is quite amazing.  She told us she walks every day for an hour, perhaps part of the reason for her long life and good health.  Last year, when Hans said to her that she certainly didn't act or look 94, she retorted right back:  "I'm only 93!  Don't make me older than I am!"  Anita is on the right; Lina on the left.
Both women live in Freiburg, a university city of about 200,000 inhabitants.  It's about 30 minutes south of us.  It is a lovely city with a beautiful Marktplatz beside the cathedral.  Every morning (except Sunday) a huge market is held in that square where one can buy vegetables, fruit, nuts, olives from the barrel, Schinken (ham), cheese and myriad other things.  What we always have when we go is a Bratwurst, one of the best you'll get, covered in fried onions.  Today, though, there is no market.  We are just in the city to pick up our friends. 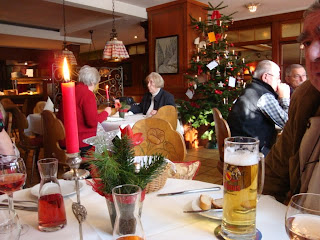 Anita had made reservations for us at a Gasthaus in the small town of Kirchzarten, about ten kilometers east of the city.  Hans and I had not been there before.  We have been to many lovely eating places with Anita over the years and often to ones we didn't know, which always means a new experience.  On these occasions the Gasthaus chosen is always a bit more special than ones we go to on a regular basis, with larger menus and generally beautifully decorated.  Today's was no exception.
We arrived at the Gasthof Sonne (also a restaurant/hotel) at about 12:30 p.m. with several hours ahead of us to eat, drink and talk together.  We were greeted at the door by the gentleman who owns the Gasthaus and by our waitress.
Shortly after sitting down, we were given the menus and, along with them, a small first course "on the house," which is common.  A crock of Quark and a basket of mixed bread were placed on the table.  So while we waited for our meal to arrive, we sat and talked, drank our wine and had pieces of bread spread with Quark.  I had my usual glass of Weissherbst wine (made from the red Spaetburgunder grape), Hans had a beer to start, and Lina and Anita had a Muller Thurgau each, a white wine from the grape of that same name.
Enjoying our main course: me on the left, Lina and Anita.
The Gasthaus was busy as is usual on a Sunday, with lots for us to take in:  candles glowing, a beautiful Christmas tree, and paintings on the walls.  The nearby tables were full and the people at them took their time as did we.  I chose duck, Anita a fish dish, Hans and Lina a specialty of the region, roast beef with a horseradish sauce.  The town that is renowned for its horseradish is about 35 minutes north of where we live, just outside the city of Offenburg, thus the reason for many Gasthauses serving it.

What is always interesting when with Lina and Anita is the conversation.  Lina is never short of words and is direct.  Hans asked about a former male friend of Anita's; he is now 96.  Anita had mentioned before that he had expected her to pay her own way whenever they went out, which annoyed her.  Lina said there was no way that she'd even look at a man who expected her to pay!  This wasn't the first time she'd said this.  A few months ago at another Sunday outing together, the same topic came up.  Lina said then that she wouldn't stay with any man who expected her to pay or to cook on a Sunday!  A woman a couple of tables over heard her; she was with her husband.  She told us her husband had wanted her to stay at home that day, but no way was she going to do that on a Sunday.  She wanted to go out and enjoy herself!  Thus the conversation went, from one table to the next, with people none of us knew. 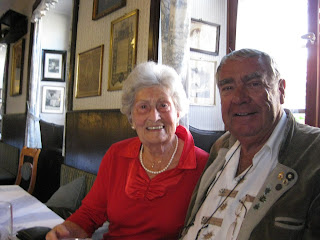 Lina and Hans on another Sunday outing.
Lina has an opinion on everything, from politics to food to men.  She told us she'd had several men friends during her hay day, including two or three husbands.  "Only one was any good!" she told us.  She still writes letters of complaint when she has something to complain about.  We can well imagine those on the other end not knowing how to deal with her.  She doesn't mince words and is certainly never at a loss for one.  She is always meticulously groomed with hair freshly done, not your every day 94-year-old or even one years younger. 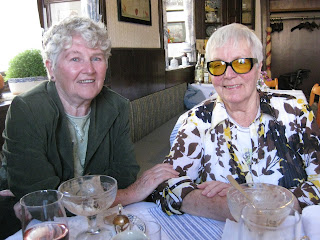 Anita and I
Anita is much quieter and, like me, tends to listen more than talk.  Not that either of us doesn't get our two cents' worth in though.  Both these women had interesting lives, living through the war and its aftermath.  And though they don't get around much now, they still enjoy good food, wine and conversation with friends.  At ages 83 and 94 they've both had quite the lives and continue to have still. 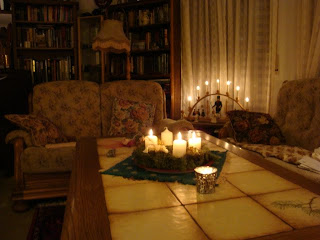 Hans and I got home around 4:15 p.m., just in time to light the third candle on our Advent wreath.  It had been a great day and one to be thankful for:  good friends, good food and a special Gasthaus.
Posted by Janet MacDonald at 1:12 PM