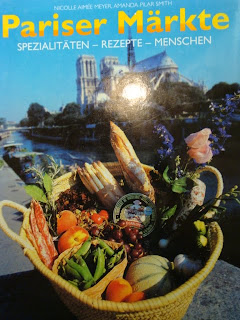 Onion soup was on my mind when we started planning our trip to Paris many years ago.  I had read much about Les Halles, the  market in Paris where housewives and renowned chefs alike shopped for their food products, including fruit, vegetables, live chickens and much more.  Les Halles is where "soupe a l'oignon" became famous.  At the end of a night, still early morning and often before the sun came up, many shopping at the market, including the farmers themselves, would have that warming and filling dish of broth, onions, baguette and cheese.

The picture opposite is of a book I have had for several years, with Notre Dame cathedral in the background.  It's a great book just for reading but also has some wonderful recipes in it.

We lived in Belgium at that time we were planning our trip, about 20 kilometers from where my husband was based with the RCAF at 1 Wing, Marville, France, about four hours from Paris.  Our Belgian landlords offered to look after our two young children so that we could enjoy a Paris sojourn on our own.

We found a small hotel on rue Washington, about a block from the Champs-Elysees and the Arc de Triomphe.  It couldn't have been a better place from which to sight-see the city.  Our room was small, but we did have a small balcony, the typical kind you see in old movies of Paris:  a door that opened to the street below, with iron bars half way up just outside it.  I'd open that door and lean against the railing to watch the scene unfold below me.  I'd pretend I was one of those artists who went off to Paris to live in a garret, eating only bread and soup, while writing  famous books and painting masterpieces.  For a moment I was part of all those books ever written!

We walked and walked and also used the subway.  One night in Montparnasse we found ourselves stranded because the subway stopped at midnight, unbeknownst to us.  Obviously I hadn't read everything I could about Paris!  We didn't get to Les Halles, but we did find a Brasserie around 11 o'clock the next night.

The picture below is of the onion soup, topped with cheese, that I made this past week. 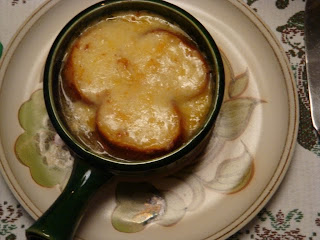 We quickly checked the menu outside for onion soup.  Yes, there it was!  The Brasserie was busy with an amazing number of customers for that time of night; however, being Paris, we took that as normal.  We ordered a glass of wine and a bowl of soup each and, while waiting, watched the people enjoy their own choices of food.  For me, to actually be in Paris at around midnight was a thrill.  The city had been, up to then, everything we had hoped for, and that included the ladies of the day or night in Montmarte.  It also included the wonderful church in that same area, Le Sacre Coeur.  And, of course, the cathedral of Notre Dame.

Tonight, though, was onion soup night.  A few minutes later the waiter arrived with two steaming bowls, topped with French bread covered in golden-brown melted cheese, long strands of it hanging over the sides of the bread.  Oh, it looked delicious!  But how would it taste?  After all, this was my first time to eat what I had been reading about for so long.  We dipped our spoons into the fragrant, hot soup and took a sip; then another and another.  The cheese was thick and ran off our spoons in long strands; the bread was crusty and crisp  below it.  Magnifique!  Each mouthful was better than the last it seemed.  My expectations had been high but they had certainly been met.  Perhaps it was because it was Paris or perhaps it was the anticipation that made it seem so perfect an evening.  It was all of that, of course, combined with a chef who knew how to cook that soup to perfection.

The search for a soup to match the one in Paris

We returned to Belgium a day later, but that previous evening began my search for an onion soup to compare with that Parisian memory.  I tried it at many restaurants in other places.  None compared.  I wondered if my standards were too high and would I ever find it again. It took me several years to find one that was almost as good.

In the late 1960s I came across a recipe in The Canadian Magazine (now long gone) by Madame Benoit (also long gone, but one of my all-time favourite food writers and cooks).  I tried it.  Superb!  Almost like the one I remembered.  The secret was unsalted butter, cooking the onions very slowly and a good beef broth, all of which give the soup its rich flavour.  It was then topped with toasted French bread and Swiss cheese and broiled until golden brown.  For many years her recipe was the one I made whenever that Paris night crept into my mind.

The picture below is my onion soup ready to be eaten at home a few days ago. 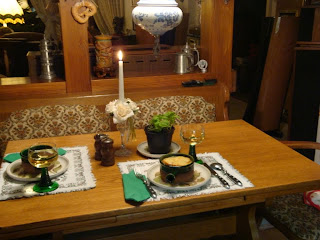 About twenty-five years later, here in Germany, I came across another recipe for onion soup in a German cookbook.  I made that recipe and loved it.  It was basically the same, but not quite.  First, a cup of white wine was added to the broth.  This recipe sauteed the French bread first in unsalted butter and then flamed it with Cognac!  It was then placed on top of the soup in bowls, lots of Emmental and Gruyere cheese sprinkled on top and placed under the broiler for 3 to 4 minutes.  Wonderful!  Not exactly as the Parisian one, but it was superb.  Mme Benoit's was the classic soup as the classic does not call for wine.

Another version I have came  from Gourmet Magazine, a magazine I subscribed to from 1969/70 until they ceased printing in November 2009.  I still have all of the magazines.  All onion soup recipes are much the same with only a few differences.  In theirs, they toasted the bread in the oven, turning it over once, until completely dry.  They then said to add the bread to the soup in the bowl, topping it with Gruyere cheese and sprinkling over it all Parmigiano-Reggiano before broiling it.  I decided to make the soup myself, but as I didn't happen to have any of the cheese called for, I topped mine with leftover cheese fondue from New Year's Eve that I had frozen!  White wine and Kirchwasser had been in that cheese.  My soup and topping were excellent. 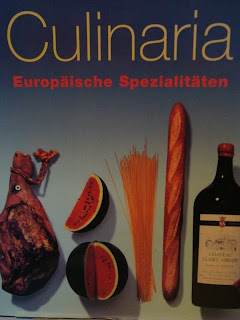 Another of my cookbooks showing some typical products of France (the bread and wine), plus recipes from Germany and  around Europe.

Here is my version of onion soup--a combination of several.

To serve 2:  Slice thinly 4 to 5 medium to large onions.  Saute the onions in unsalted butter (no substitute acccording to Mme Benoit), along with a bay leaf, 2 cloves of garlic cut into halves and some salt.  Cook the mixture, stirring often, until golden brown and soft, about 45 minutes.  Don't let the onions burn.  I leave the pot uncovered for the first 20 to 25 minutes and then cover it for the last 20 minutes; watch and stir often.

When cooked, add a teaspoon of flour and stir a minute or so.  Add half a cup of dry white wine (I used a Weissburgunder wine this time; a Pinot Blanc), stirring another couple of minutes.  Stir in 2 cups of beef broth, 3/4 cup of water (or less water and more broth or a bit more wine) and some freshly ground black pepper.   Simmer, uncovered, about 30 minutes, stirring occasionally.  Remove the bay leaf and garlic.  Ladle some soup into two oven-proof bowls.

Place toasted French bread slices (about half an inch thick) on top of the soup in the bowls and then cover them liberally with a combination of Emmental and Gruyere cheese.  (Or try topping it with leftover fondue if you have it, as I did; just remember to thaw it out first!)  My fondue was quite thick, thus the reason it froze so well and was perfect on the French bread.  Broil in a very hot oven until the cheese is puffy and golden brown.

Light a candle or two and serve your onion soup along with a glass of the wine you used in cooking it and feel the spirit and romance of Paris on a spring night! 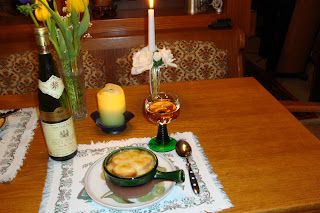 Our table later in the week for second-time arounds!  It is evening and dark outside, and with a nice bottle of wine, flowers and candles, the atmosphere, though not Paris, adds to our enjoyment.

Les Halles market is long gone but I'm sure many Parisians still remember those days.  That night in Paris was many years ago, but its memories, tastes and smells seeped into my senses and lingered for all these years.  What I've learned is that I'll never find that perfect soup again, not even in Paris in that cafe.  That was a particular moment and time in my life and became a cherished memory.  My search for it ended with some great substitutes that bring back those memories of a long-ago sojourn in Paris and the steaming bowl of "soupe a l'oignon," but it also has made new memories that will also linger in my mind and heart.

Posted by Janet MacDonald at 6:21 AM