Remembering the Sacrifices of Those Who Served 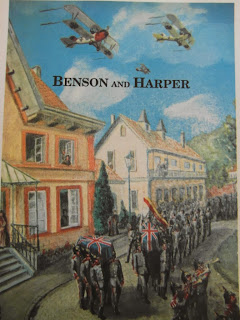 Two Canadians, Lieutenant Harper and 2nd Lieutenant Benson, were shot down over Nonnenweier near Lahr in June 1918.  Both officers were crew in a DH 9 of No. 99 Squadron.  They lay in state at that time in the same funeral building that is at the front of the Lahr cemetery today.  They were buried in the Bergfriedhof cemetery with full military honours, their coffins escorted by English prisoners-of-war.  The German military band of the 169th Lahr Infantry Regiment followed.  Their bodies were later moved to the Commonwealth Niederzweihren Cemetery near Kassel, Germany.  The memorial stone commemorating the two pilots stands to the right of the Canadian Cenotaph in the Lahr City cemetary.  It was donated by Herr Gunter Lorenz of Lahr in the 1980s.

The booklet Benson and Harper, the story of two brave comrades as it says on the cover, was issued by the Royal Canadian Legion #002 of Lahr in 1989.  "It is a fragment of history torn from the annals of WW I," as quoted from the booklet and the words of Anthony Fallon in the Foreword.  The preface, by the Lord Mayor of Lahr at the time, Dr. Werner Dietz, is dated November 1989.  Two individuals who added their knowledge and helped to write that booklet were Herr Janos de Galgoczy-Mecher, Lahr, and Herr Erich Hockenjos, Lahr.
The information in the above two paragraphs came from that booklet and from an article on Benson and Harper on the internet.  I found it by typing the words "Benson and Harper" on Google.  Text with pictures is there for anyone wishing to read it.
Benson and Harper Branch #002, Royal Canadian Legion Lahr
Remembrance Day 2013 in Lahr, Germany 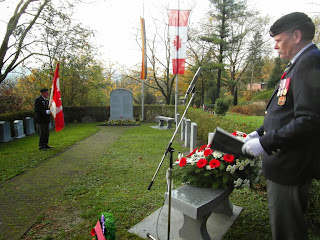 Above, the Standard Bearer, Ken Gardner, and at the podium, Guy O'Quinn﻿
﻿
The Canadian flag is to the right of the sandy-coloured memorial Stone
Historically, on November 11th , the Benson and Harper Branch # 002 of the Royal Canadian Legion in Lahr holds its ceremony and service at the Canadian Cenotaph in the city cemetery.  This year was no different.  It was a long steep climb up to the top where the Cenotaph is located, becoming more difficult each year for many of the Legion members as they are older now and it isn't so easy.  Fewer of us attended this year, with several being ill or elsewhere.  This year we had only one Standard Bearer.  Two members, the President of the Legion and the Area Commander, were attending a Remembrance Day Service in France. 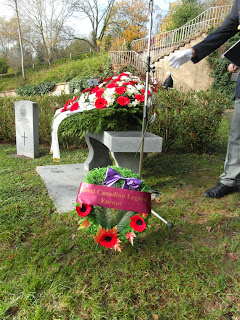 Above, the Lahr City wreath and Legion #002 wreath in the forefront. 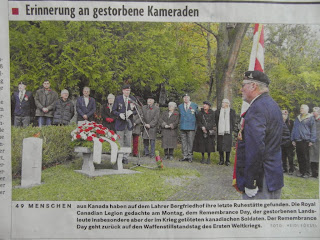 ﻿
The picture above appeared in the Badische Zeitung, one of the newspapers in Baden-Württemberg, on November 13, 2013.  It shows some of those who attended Canadian Remembrance Day at the Cenotaph in the Lahr cemetery.  The title of the picture says, 'Remembering dead comrades'. 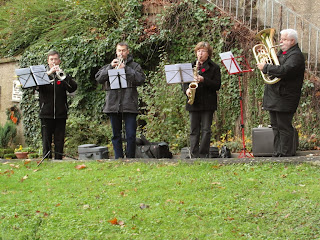 Four of the musicians who voluntarily play on Canadian Remembrance Day were there as usual this year, even though it was a German working day.  Their Remembrance Day was the following Sunday, on November 17th.  We attended a special service in Schiftung, just outside Baden-Söllingen, at the German War Graves Cenotaph on that date. 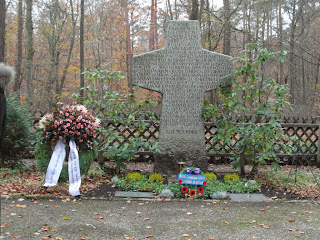 The pictures at left and below right:  at the Gedenkstein in Schiftung on German Volkstrauertag(German Remembrance Day).  It is dated 1945 and inscribed with the names of 33 German soldiers who fell in the last days of the war.

The wreath in centre was placed by members of the Royal Canadian Legion Baden Branch #001. 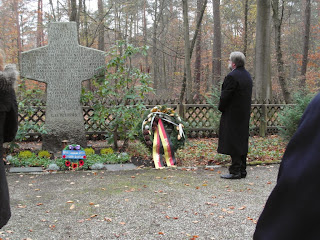 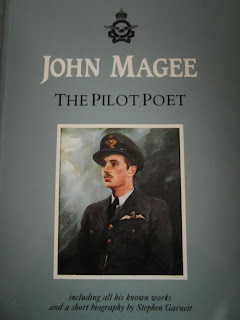 Pilot Officer John Magee was an American who was born in China (his parents were missionaries there).  In 1940 he was about to enter Yale University when he felt he had to help in the war that was raging over England.  The United States had not yet entered that war.  He joined the Royal Canadian Air Force (RCAF), passing his wings test in June 1941 to become a fighter pilot.  He trained at RCAF Station St. Catharines and RCAF Station Uplands (Ottawa). He was then promoted to Pilot Officer and posted to #53 Operational Training Unit (OTU), Royal Air Force (RAF) in Llandow, Wales.  Sadly, flying a Spitfire through clouds over England in 1941, at age 19, he collided with another Pilot.  Both were killed.  At that time he was based with the all-Canadian 412 Squadron at RAF Wellingore, England.

(The information about John Magee was in the book  shown at left and on Wikipedia.)
Magee, a poet and highly intelligent, will always be remembered for "High Flight," the most famous flying poem in the world.  It expresses how exhilarating and how exciting it was to fly so high above the earth.  On his gravestone are inscribed the first and last lines of his poem:  "Oh! I have slipped the surly bonds of earth" and the last line, "Put out my hand and touched the face of God."

I wrote last year about my great uncle, Alfred Riggs.  He was killed in the Boar War in South Africa--one of Canada's earliest wars--in 1900 in the Battle of Paardeberg.  I drove to Prince Edward Island, my birth province, with my sister Paula this past summer and visited the Cenotaph/monument where his name is inscribed on a plaque, along with a fellow Prince Edward Islander, Roland Taylor. 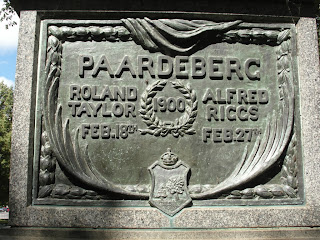 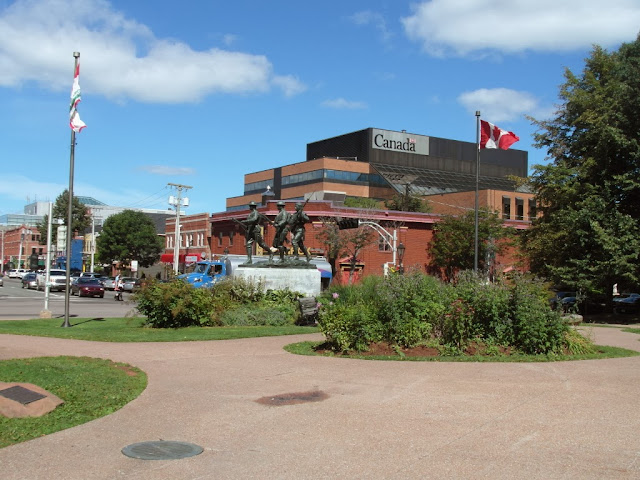 ﻿
The Plaque below is dedicated to the men of the Royal Canadian Regiment who fought so bravely in the Boar War in South Africa, 1899 - 1902.
﻿ 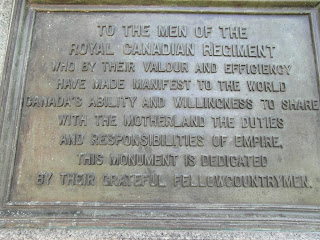 Remembering the Canadian dead from past wars and peace keeping missions around the world always gives one time for reflection.  Those killed and injured in Afghanistan was in our era, which brings it close to us today.  I found the Remembrance Day Service this year to be both moving and sad.  It always is, but somehow it struck more deeply this time.  It makes one wonder about war--and why?  That is mostly an unanswered question.  One should always remember that soldiers do not start a war. 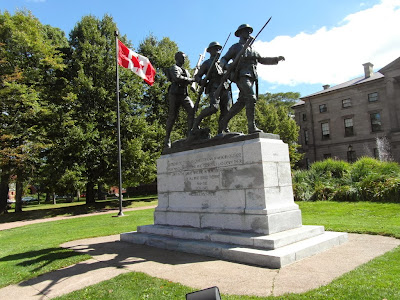 The Canadian Cenotaph in Charlottetown, P.E.I.﻿
I recently read the book, March Forth, an inspiring true story written by Trevor Greene and his wife, Debbie Greene.  Trevor was terribly injured in Afghanistan.  It is one of the most moving true stories I have ever read.  The foreword was by General Rick Hillier.  A documentary about Trevor was made for Canadian television a couple of years ago.  Perhaps it is my own background of working for the military and of being a military spouse along with my background in medical records that made it so fascinating for me personally.  Whoever reads it, however, will be moved and inspired.  Below its title are the words:  "The Inspiring True Story of a Canadian Soldier's Journey of Love, Hope and Survival."  I highly recommend this book.
The War of 1812 between Canada and the United States was 200 years ago.  Other wars where Canada participated is some time ago now as well, with World War I ending in 1918 and World War II ending in 1945.  But memories live on from all of those wars, whether from the books we have read, the movies we have seen or the stories we have been told.  There are still veterans of WW II and the Korean War who are alive and no doubt they still have many stories to relate.  Afghanistan is the latest.  Thankfully, that war, for us, is now over.  It isn't really over, though, for those who were badly injured or for those families who lost loved ones.  We had far too many casualties and we should never forget the cost in lives taken and lives damaged. 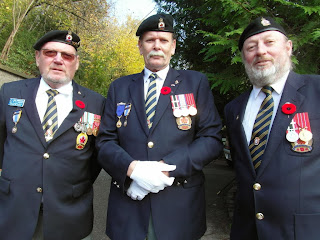 Three Canadian Legion members and retired Royal Canadian Horse Artillery (RCHA) men on Canadian  Remembrance Day.  From left to right:  Ken Gardner (Standard Bearer), Guy O'Quinn (in charge of the service) and Bill Harbin.
After the service ended, we headed to #002 Legion's meeting place, the Gasthaus Linde in Reichenbach.  Their regular meetings are held upstairs, but we gathered in the Gasthaus on the main floor.  Again, there were fewer this year than last, but soup and bread were still offered:  not Bill Fairley's homemade clam chowder, which had become traditional (Bill was very ill in the hospital on that day), but a noodle soup donated by Herr Wäldin and made by the Gasthaus Wirtin (inn keeper).
Herr Wäldin is shown at right in the picture below.  On the left is Colin Starr.
﻿ 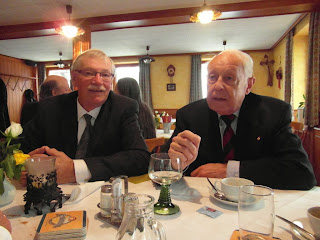 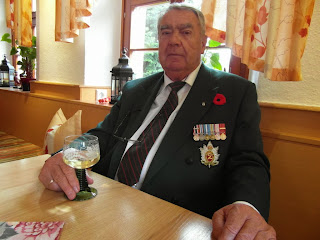 ﻿
All countries involved in war suffer many human losses.  Canada has had losses in peace keeping missions as well.  A soldier, airman or sailor fights for his or her country as that is what is expected and that is what each feels is a duty, whether they believe in that war or not.  We should hold them all in high regard for their service to their country.
Standing on the right in the picture below is Reg Bonner, Area Commander for the Royal Canadian Legion in Europe. This is from Remembrance Day 2012 and the last picture of Bill that I took at the Legion.
William James Fairley (left, in the picture below) passed away on Sunday, 17 November 2013, at the Lahr Krankenhaus.  Bill was born in England but later moved to Canada.  He joined the RCAF where he served for many years.  He had lived in Reichenbach since the 1980s with his German lady partner, Maria.  He was a Past President of Legion Branch #002 and a member of the Masonic Lodge until his death.
﻿
We shall remember him!  Aufwiedersehen! 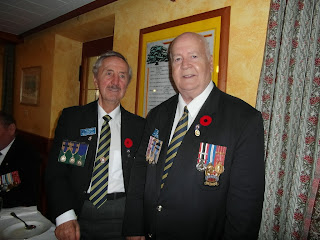